Now ranked 25th, TSMC became one of the top 30 MEMS companies for the first time. TSMC added almost $30M in sales in 2015 thanks to the growth of customers like InvenSense and several other smaller companies, including mCube. This is the first time that a pure-play foundry has entered the top 30 and is a sign of the evolution of the MEMS industry. TSMC displaces infrared imager manufacturer ULIS, which missed 30th place by only a few million dollars of sales, the only change in the top 30 list this year.

Radio-frequency front-end module applications are driving the growth of Avago and Qorvo. 4G phones with an ever-growing number of frequency bands to be covered are driving the success of filters using FBAR technologies. We are confident that this growth will continue in 2016 and Avago, with $650M sales in 2015, is positioned to take a large portion of this. Its strategy of integrating both innovative MEMS devices and packaging is the growth engine of its success.

InvenSense has been one of the few inertial sensor companies to grow revenues strongly in 2015, although AKM and Alps also grew modestly. InvenSense’s strategy for success comes in delivering functions such as sensor systems on a chip and its STUDIO sensor software suite to the mobile phone industry. However this has reduced the company’s profitability. AAC, and to a lesser extent Knowles, GoerTek and Infineon, are benefiting from the increased number of microphones in mobile phones and the diffusion of microphones into wearable applications.

By contrast, several companies have faced revenues decreases, including Canon, Sony (mainly due to currency fluctuation), STMicroelectronics, Texas Instruments, Hewlett-Packard, Epson and Panasonic. Most of the inkjet printhead manufacturers, like Canon, HP and Epson, suffered as printer sales fell. STMicroelectronics has not been able to stabilize its position but its sales shrank less than last year, with lower mobile phone revenues offset by increasing sales in automotive infotainment and wearable applications. TI will continue to battle against the slow decline of projection system devices, as will Panasonic in automotive safety.

Despite a fierce price war in consumer applications, especially mobile phones, Bosch has stabilized its sales at $1.2B. It remains the runaway leader of the MEMS industry, an incredible 60% bigger than its nearest followers.
While Bosch remains clearly above the other MEMS companies, the overall picture of the top 30 MEMS companies is very different from two years ago. STMicroelectronics, TI and Avago achieved sales in the $700M bracket. A further seven companies earned from $300-500M, of whom Invensense, Qorvo, Knowles are growing fast, while HP and Panasonic are managing decreasing sales. The increased number of large followers is new, an important sign, along with TSMC’s entrance, of the maturation of the industry.

To be in the top 30 MEMS companies, the minimum sales level was $74M, compared to $65M in 2014 – a 14% increase in a single year. MEMS obviously remains a very dynamic industry!

Note:
The sales figures Yole Développement uses are based on either companies’ financial reports or its own evaluation. Yole Développement includes revenue data up to the first level of packaged devices, but excludes further packaging levels. For Bosch, STMicroelectronics, Infineon, Honeywell, TSMC and Sony, we intentionally include MEMS foundry services, die and device sales. Cumulative sales for the top 30 MEMS companies therefore ‘double count’ foundry activities and device sales. 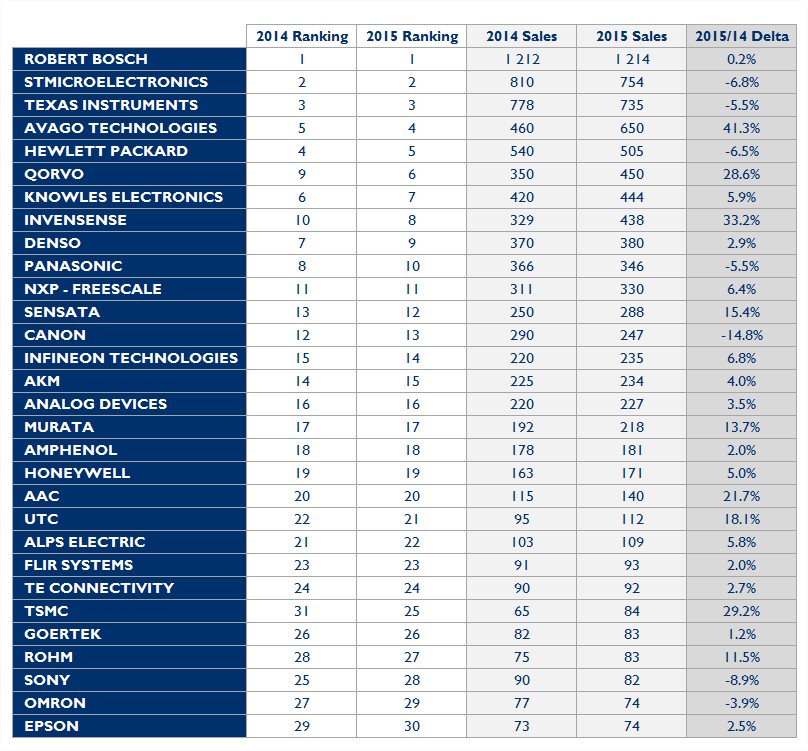