Via-middle TSV processes are enabling high volume production of applications ranging from the memory stacks in production today to future mobile applications where memory will be stacked on application processors to reduce power and improve performance.

Thermo-compression bonding is the only viable choice for assembly of these 3D products to ensure repeatable bond line thickness and consistent metallurgy in the bump structure.

At the recent IWLPC Conference in San Jose, Tom Strothman of K&S reviewed the options for stacked TSV die assembly using thermo-compression Bonding (TCB) and some approaches used for cost reduction. I-Micronews thought it was worth… a closer look.

The first challenge is the thin silicon itself with TSV structures and a thickness of 50 microns or less. The die is fragile and typically warped due to the residual stress of the dielectrics, RDL and UBM. As the silicon is thinned to 50 microns during the via reveal process and the backside dielectrics and UBM are applied, the imbalanced stress from the dielectrics and metals on the front of the wafer as compared to the newly formed dielectrics and patterning on the back of the wafer will cause warpage of the thinned silicon wafer. After dicing this stress remains, causing bowing of the die that can be as much as 40 microns in a die size that is 9x9mm.

A well-controlled stacked die process will have consistent Bond Line Thickness (BLT) and Solder Line Thickness (SLT). If the BLT is too high, the solder in the joints can neck and reduce the cross-sectional area of the joint, potentially affecting reliability. If the BLT is too low Cu pillar bumps at fine pitch can be shorted together by solder squeeze-out. To achieve the desired BLT and SLT, the die must be held flat during the TC bonding local reflow process. TC Bonders are able to achieve this by vacuum clamping the warped die onto a flat heated bond head surface throughout the bonding cycle. 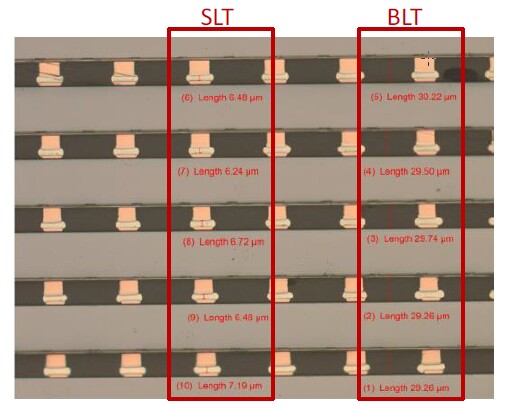 A single die can be bonded “flat” by using the vacuum clamping of the bondhead, and the process can be optimized for time, temperature and throughput requirements. The next die in the stack does not have the same latitude for adjustment. Heat will rapidly be conducted through the thin silicon and Cu pillars of the die being bonded into the die below. During the reflow of the Cu pillars onto the UBM, it is possible to remelt the lower die. If the lower die remelts, it is no longer held flat and it can begin to relax toward its original warped shape. 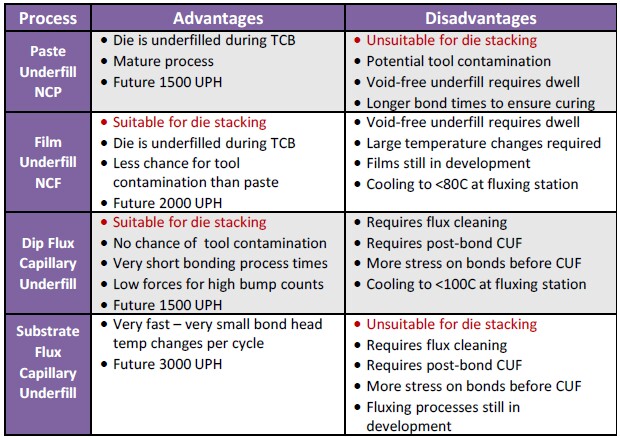 Non–Conductive Paste (NCP) is commonly used as an underfill for many TCB processes and is a well-established technology. The logistics required to dispense a new layer of NCP on the top of each bonded die would limit machine throughput and substantially add to the cost of the process.
Non-Conductive Film (NCF), also known as wafer applied underfill, is vacuum laminated to the die surface prior to dicing. Since the film is applied in wafer form, it is highly suitable for use in stacked die processes. NCF is being used in volume production today although NCF product development continues. NCF films must be stable during the die pick operation, become nearly liquid without curing during the temperature ramp, and cure very quickly at a temperature below the melting point of the solder. It should also contain a high percentage of filler particles for CTE reduction, yet still have transparency to ensure alignment marks are not obscured. Die transfer temperature with NCF of 150 C is possible.

The final challenge for stacked die processes is the overall cost of the process. The cost of TCB must be competitive with alternative assembly technologies and this can only be achieved if the throughput and yield of the process is high. The NCF process has advantages especially when using a collective bonding process to achieve a higher processing speed. In a die by die process, each die is fully bonded and the NCF is cured. In a collective bonding process each middle die is just tacked in place and the final bond and NCF cure is not done until the top die is placed.

Semiconductor in smartphones: what are the design wins? – Smartphone Design Win Monitor, Q2 2021