The camera module industry has reached new heights in terms of innovation and market growth: these are the key learnings from Yole Developpement’s latest report, Camera Module Industry 2017.

Two years ago, this industry’s growth was fueled almost entirely by smartphone market expansion, with just one camera module on each side of the handset. At the time, the key innovation was the development of Autofocus and OIS in order to transcend 8Mp cameras. 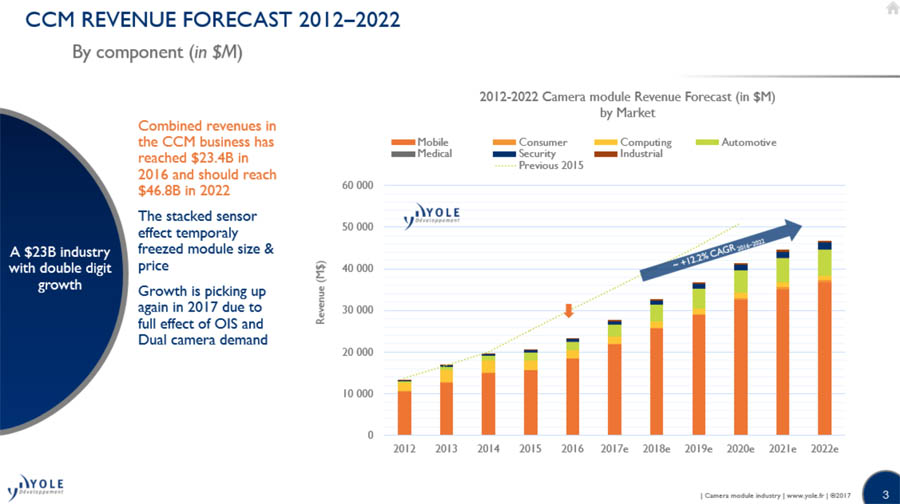 In 2017 the situation has evolved. Dual cameras are now commonplace, and active imaging (for example, cameras requiring illumination for things like iris scan and 3D sensing) are entering the market. The supply chain implication has been dramatic, and average selling price has suffered more than expected due to rationalization and renewed competition.

The technology game is particularly intense, a direct consequence of the major OEMs’ choices. Here’s a quick summary of the different technology trends, since they are clear differentiators among the first smartphone players:

– Samsung did favor single cameras with full PDAF, leveraging Sony’s latest triple-stack sensor technology. It almost instantaneously fitted its main cameras with OIS in response to Apple’s first move. In its most recent handset, Samsung added an iris-recognition camera in front.
– Apple first added a secondary camera module in the rear to realize 2x optical zoom, and is now adding a fourth camera module on the iPhone X’s front for facial recognition and 3D interaction.
– Huawei successfully introduced the dual rear-camera setup thanks to its alliance with Leica, with the two cameras enhancing the photographic experience. 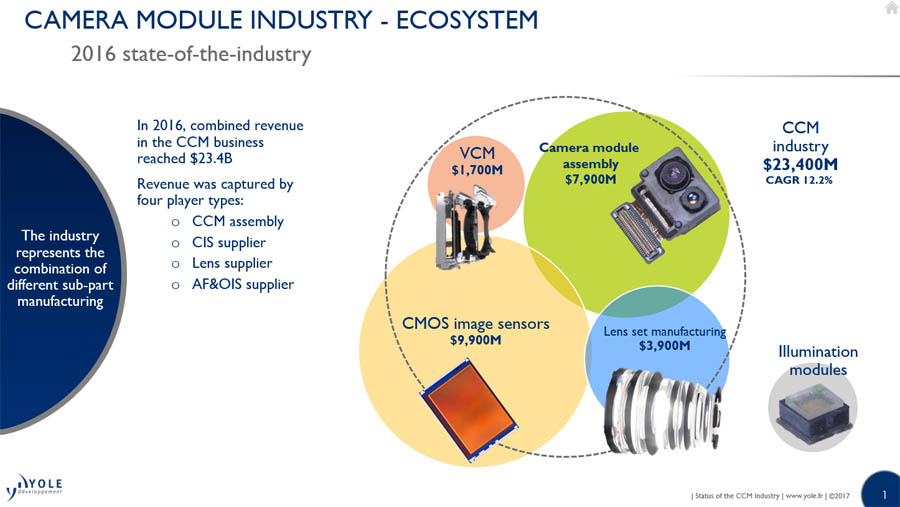 This battle in terms of camera module specifications, has significantly impacted the supply chain:

– VCM players producing the autofocus (AF) and optical image stabilization (OIS) mechanisms have had to adapt to the huge production volume and low cost requested by the smartphone industry. This led to a huge restructuring effort that resulted in a move from Japan and Korea to China and Vietnam. Companies like New Shiko and TDK were the big winners, but this activity’s attractiveness has since declined.

– For image-sensor makers and lens-set makers, the situation is reversed. In these sub-markets, leaders Sony and Largan have enjoyed quasi-monopolies. This situation is ending though, since the competition is now catching up in terms of technology.

– Camera module makers have thrived, but are hugely dependent on customer loyalty. For example, LG Innotek reclaimed its crown this year, but feared a collapse when it lost Apple orders.

– One last trend in the ecosystem is illumination modules’ emergence. Since some of the new camera modules now require active illumination, they must be combined with an LED or structured light emitter. This is a new technology set for acquisition by camera module makers.

Technologically, camera modules are evolving and showing considerable diversity. With many innovations entering the market simultaneously, AF and OIS’ penetration is not as fast as Yole initially thought. The main dual-camera approach for the smartphone’s back is one thing, and the dual-front is another. These dual approaches can either be designed with two separate modules or made on a single substrate.

The average cost for a mobile camera module has remained relatively constant, but complexity has risen dramatically, with high-end VCMs and active alignment now mandatory on the latest modules. Currently, total camera module value per phone is almost proportional to the number of cameras; two cameras is $16, three cameras is around $24, and the cost for four cameras exceeds $30 per handset.

Wrapping up, we can conclude that the camera module industry has concluded its adaptation period and should now thrive for the next five years at a 12.2% CAGR. 10% of industry revenue now comes from automotive, in part for sensing cameras. Also, the introduction of machine-vision powered by artificial intelligence is a game-changer that will open doors to new applications in consumer electronics, robotics, and transport, further fueling this industry’s impressive growth.