Autonomous vehicles are clearly the hot topic for car makers, their suppliers but also for all the new companies that are looking to enter in the automotive industry: New car manufacturers can appear thanks to autonomous vehicles, in the same way electric vehicles allowed the appearance of companies such as Tesla.

Apple, Google and a significant number of other companies are actually trying to make this happen, as presented in the new report from Yole Développement (Yole) Sensors and Data Management for Autonomous Vehicles report 2015.

Sensor technologies (and data processing) are the driving forces in making fully autonomous vehicles a reality. An important parameter of autonomous vehicle market is that almost all the needed sensors are already available. The first sensors put together to provide advanced driver assistance features are now available in several cars, offering a first level of autonomy with a semi-autonomous driving under specific circumstances. Car makers are racing to develop safe self-driving cars, but this race is a distance run more than a sprint, where multiple automation stages will imply multiple sensors. Ultrasonic sensors, radars, and multiple cameras systems are already embedded in high-end vehicles, and within 10 years, they could also include long-range cameras, LIDAR, micro bolometer and accurate dead reckoning. These devices will work in parallel and each technology will support another to ensure codependency and avoid issues. Even though sensors are only a part of the puzzle, their market opportunities are promising.

The necessary building blocks for monitoring an autonomous car (sensors, software, Electronic Control Unit (ECU), data management, GPS and connectivity) require efficient and reliable devices. Ultrasonic sensors, Cameras, and radar technologies are all mature enough and correctly priced nowadays for embedding in more and more cars. Industry efforts are now focused on LIDAR and dead reckoning systems that will add new features to the autonomous driving experience. Yole expects a $2.6B market value in 2015 for sensors in autonomous cars, reaching $36B by 2030 at a CAGR of 19%. Currently, the most advanced commercial car with autonomous features embeds in the order of 17 sensors. Yole anticipates 29+ sensors by 2030. Today, two sensor businesses dominate: ultrasonic sensors and cameras for surround. Together they are worth a $2.4B market value, but ultrasonic sensors comprise 85% of current market volume. By 2030, cameras for surround will lead the market at $12B, followed by ultrasound sensors and long-range radar ($8.7B and $7.9B respectively), and then short-range radar ($5B). Overall 2030 market value is estimated at $36B. 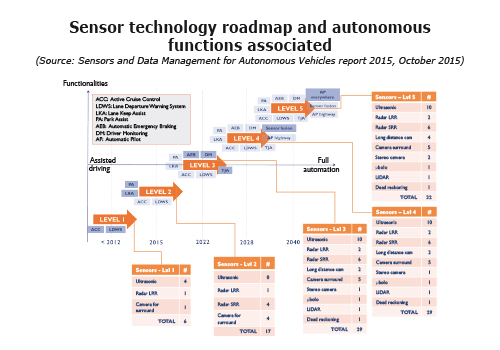 Behind the value of the market, the functions to be implemented are driving the market adoption. Cars will soon have the ability to cruise on freeways and safely navigate through traffic jams with minimal driver input.
Future cars will slowly evolve from traditional mechanical, fuel-powered, and high-powered electronic vehicles into electrical-powered, ultra-sensitive machines able to anticipate many critical situations. The overall goal is to replace the main cause of driving errors: human beings.

Yes, the automotive market holds great promises. But who will make profit out of it? The market value for sensors in autonomous vehicles is likely to grow rapidly, but a strong focus on computing and software is also expected in the coming years, with more powerful Electronic Control Units (ECUs) and sensor fusion for improved reliability and efficiency. We believe at Yole that sooner or later the value will flow from sensors to ECU and software, leading to the emergence of new specialized players who will take a slice of the pie. Will software companies be the new leader of the automotive industry? It could happen.

After the changes needed in legislation and all the legal aspects of autonomous vehicles (who is responsible when a car crash occurs?) the final challenge of autonomous car will be the acceptance by the end user, you and me. Will you agree to let the car decide how to bring you home? Taking into account complex conditions of traffic, weather, rainy night…? We will all have to test it before accepting it.