Sony continues to reinvent itself via radical innovations, particularly in semiconductor technologies. These innovations have implications beyond consumer applications, i.e. in fields like automotive, medical, and manufacturing. Sony’s technology strategy is to conquer the market with premium added-value products.

This strategy starts at the sensor level, extends to the system level, and entails developing the right software to enable new functions. This trend is described in the latest Yole Développement (Yole) report “Status of the CIS industry 2015”

On the image sensor front, Sony announced it will raise fresh money (almost $4B) from the stock market and invest in image sensors as preparation for the next step: sensing. This strong, new initiative is 100% linked to the CIS market’s evolution, which entails providing new functions and not just image sensors.

Sony recently announced a capacity of 816,000 300mm wafers per year, and should reach 1M wafers in 2016 (see the slide extracted from Sony’s investor presentation). These numbers pertain only to the image sensor part. Sony CIS’ particularity is to be mainly stacked, using a read-out digital IC underneath the imaging IC itself. According to Yole’s analysis, the read-out IC comes from external foundries — primarily TSMC. Wafer production associated with Sony CIS is double the image sensor figure (~1.6M in 2015 and ~2M in 2016). This is in line with their current CIS market share, which has grown quickly from 30% to 40% (see the following graph extracted from Yole’s 2015 Status of the Image Sensor Industry). 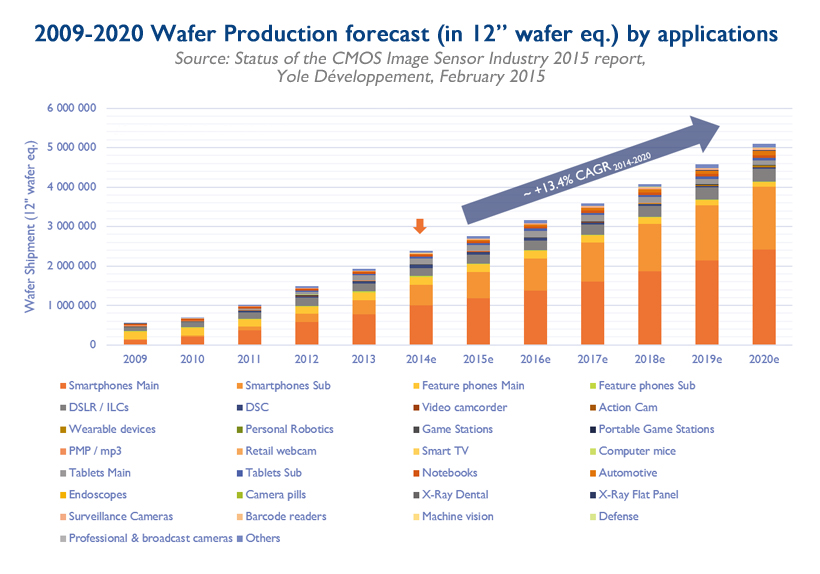 Over the last five years, Sony has invested close to $3B in the CIS business. But this new investment trumps that amount, and it occurs at a time when Chinese investors just spent close to $2B to purchase Omnivision, the industry’s #3 player (Samsung is #2). And so this really has become a battle of the giants, given that Sony’s most visible customer for its image sensors is Apple, and its lesser-known customers include almost every Chinese mobile manufacturer. At a time when the iPhone has become a $100B business, Apple and Samsung are sparring in the consumer electronics industry, with each reaching $200B in revenue. To appreciate how large and important this number is, consider that it’s similar to the global revenues of Toyota and Volkswagen, the auto industry’s #1 and #2, respectively. And with cameras now a key mobile phone feature, mobile phones are critically important for all players. The investments in the CIS industry are strong evidence of how high the stakes are.

Yole forecasts that the CIS industry will reach $10B this year, with Sony remaining the undisputed world leader –mainly at image sensor level, but gaining strong momentum at camera module level too. And what will Sony’s $4B be used for? Probably to increase capacity, enhance R&D efforts, and further widen the gap between its competitors. It may also be used in applications that will generate a firm lead in automotive, and to develop sensing technologies for consumer and automotive applications. With this bold financing move, Sony is leveraging its leading technology position and demonstrating the confidence it has in its products, its technology, and its future.

Sony is increasing in strength, and there’s little the competition can do to counter its growth.

Up to recently, image sensors were only used to create images, visualize and store scenes, activities…
Nowadays, imagers are more and more used as sensors to detect, measure, analyze. Examples are numerous in industrial, security and automotive applications, such as line departure systems for cars, on-line quality monitoring, counting, sorting, face recognition, people counting…
The market is highly segmented and challenges rely on the combination of sensor technology, optics/packaging and software.
To obtain a clear view on this exiting field, Yole Développement is launching a collaborative project to analyze:
• The market potential of “smart image sensors” for sensing applications
• The technologies and their ability to answer the market needs
• The products and applications roadmaps
• The issues related to design, packaging, and software
• The value chain, from CIS die to the data value
• The patent landscape

Advanced packaging: the pandora box for all the players of the semiconductor industry