The $50B leader is buying a startup making roughly $360M and is paying $15B for it. What is going on with this Intel purchase of Mobileye ? In the ligtht of our latest reports (Imaging Technologies for Automotive 2016 and Sensors and Data Management for Autonomous Vehicles 2015) the situation is not so surprising. Why paying so little for such a great company ? Just joking, this price of $15B is catching imagination but let us give you our analysis.

First, there is no doubt Intel has a really big reason for looking for external growth knowing the collapse of its traditional PC market. Despite its success in the internet server business, this is not enough for the largest semiconductor company in the world. The latest technologies it is developing such are FinFET is extremely costly and only strong market drivers can justify the investments. Intel is hungry for growth. It is a technology driven company that needs to find the next application for its technology. Because it did not deliver the right technology package for the mobile business, it is still looking for the next market revolution that would ask for an Intel chip « inside ». The management of Intel is typically fighting a disruption event: the end of the PC era. There is almost nothing they can do to fight the internal efficiencies designed to focus on the requirements of the PC market. Paying $15B for Mobileye is therefore a very good deal from the Intel side. 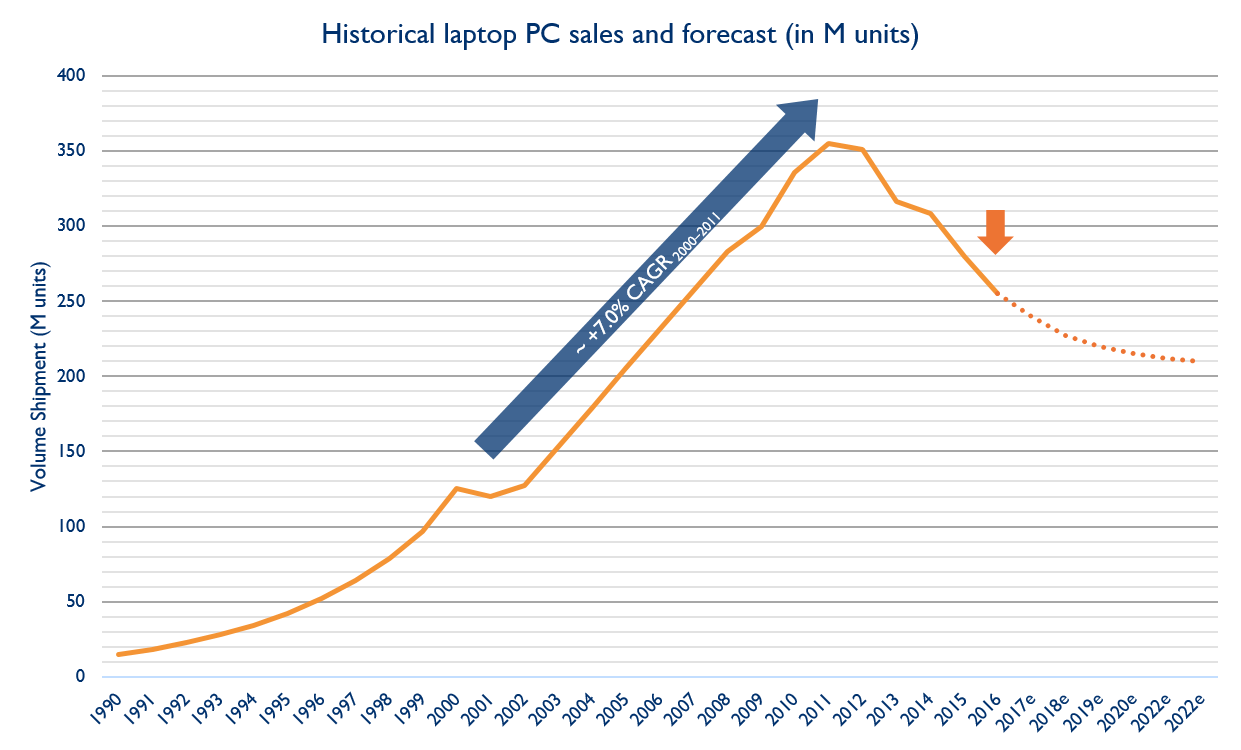 On the other hand Mobileye is at the center of the attention for a little while. Could they have maintained their dominant position in the ADAS Convoluted Neural Network (CNN) chip when strong actors such as Bosch and Denso were partnering with heavy weighted semiconductor players like Nvidia and Toshiba? Were they so afraid of the market losing confidence with their product when they had 9 years in a row a 90% YoY growth rate and a very capital efficient fabless model? Probably not. Mobileye had no real reason for selling except for being a buoyancy device for Intel.

Nevertheless, can we consider this as a bad deal for Mobileye? No, as it is now in full control of its future with the addition of Intel money, people and technology. Probably something bigger than autonomous driving is at stake. Machine vision and CNN have much broader appeal than automotive. Cars with autonomous features are clearly the only +$10,000 type of robot we can get value for money at the moment. It does fell odd tough, this is a little like if Apple was being bought by IBM in 1983. Probably, the interest of shareholders on both sides of the deal was well sustained. Israel did not have the time to enjoy its Nokia moment like Finland did in the early 2000. Big money still rules the semiconductor hardware industry and that deal should accelerate adoption of autonomous driving technology. 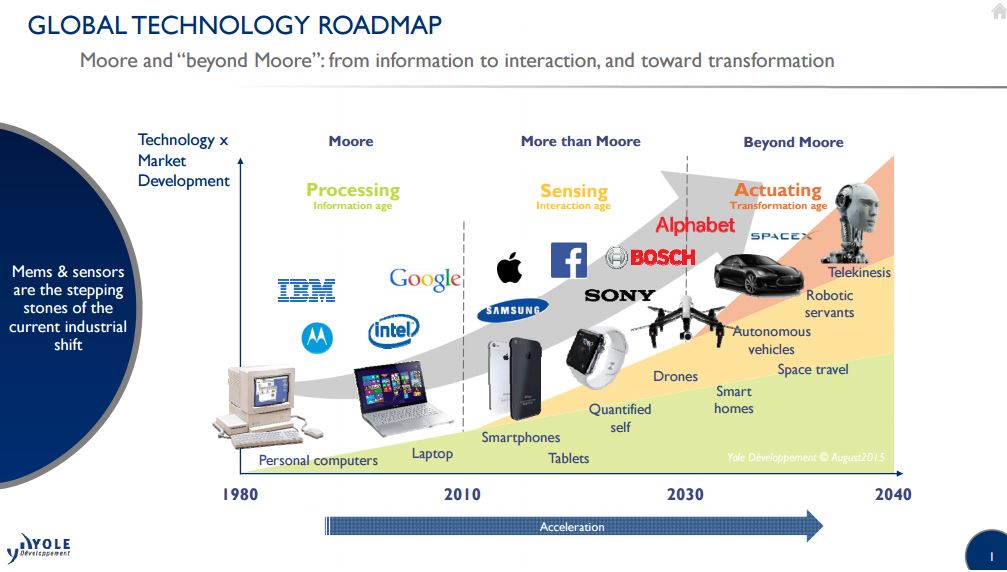 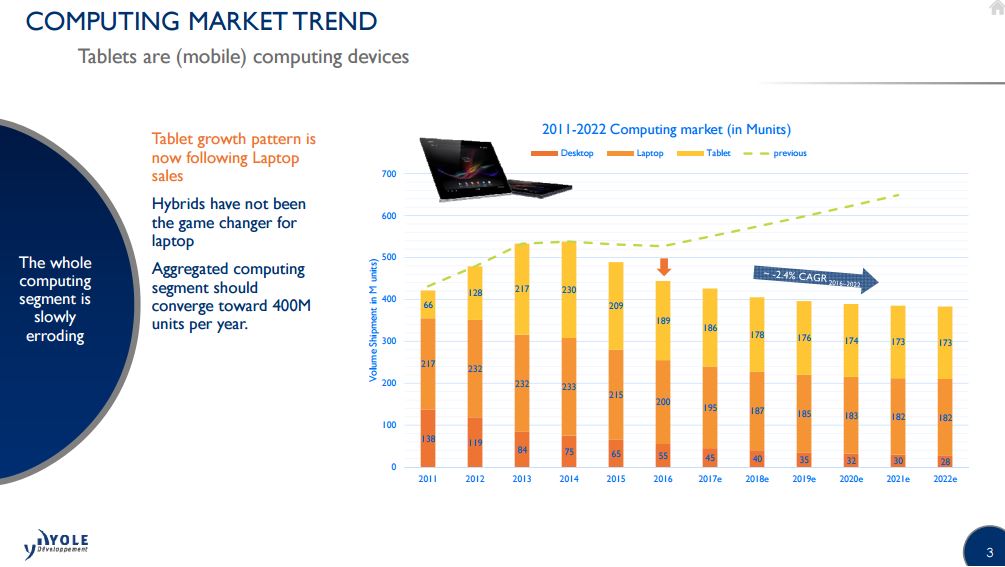 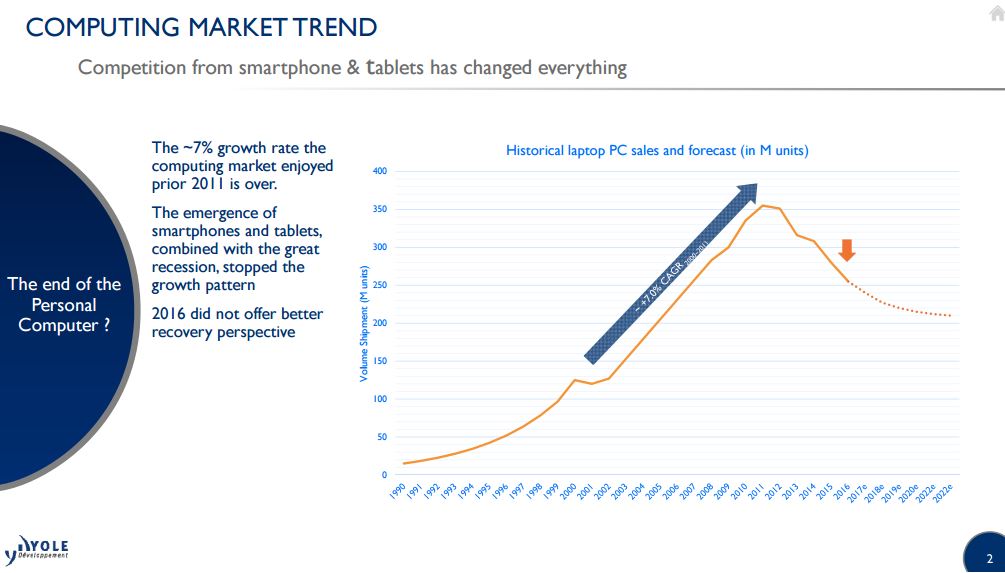 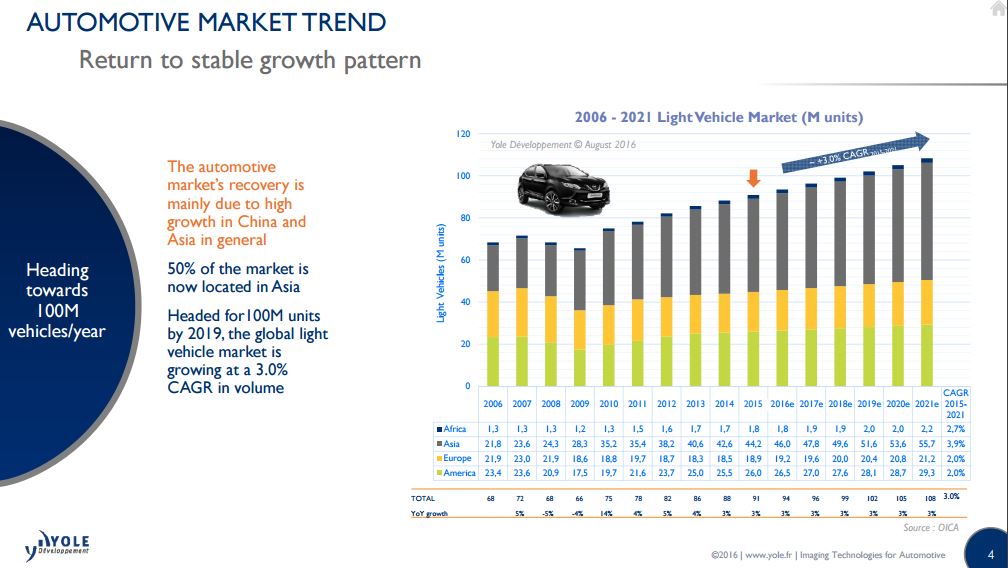 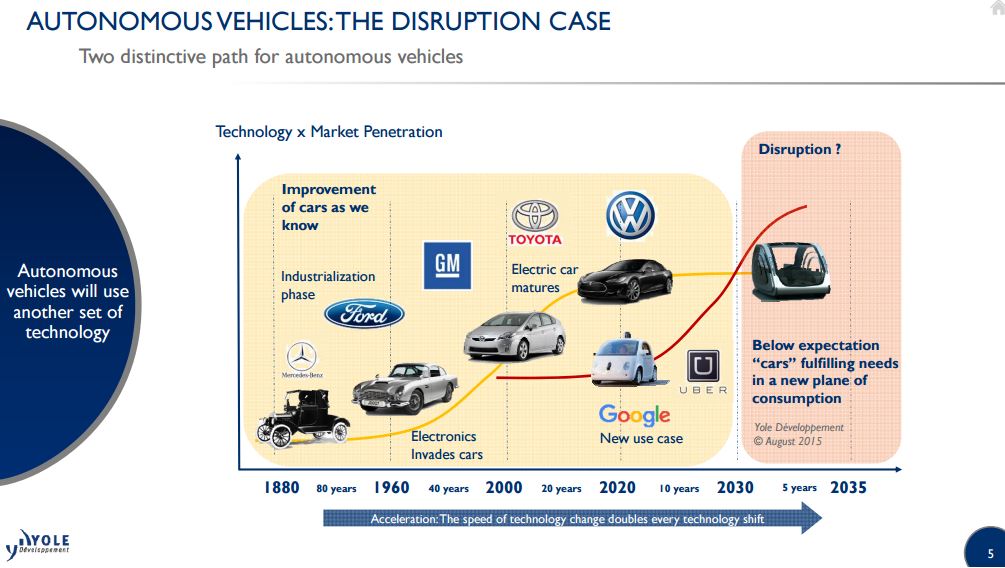 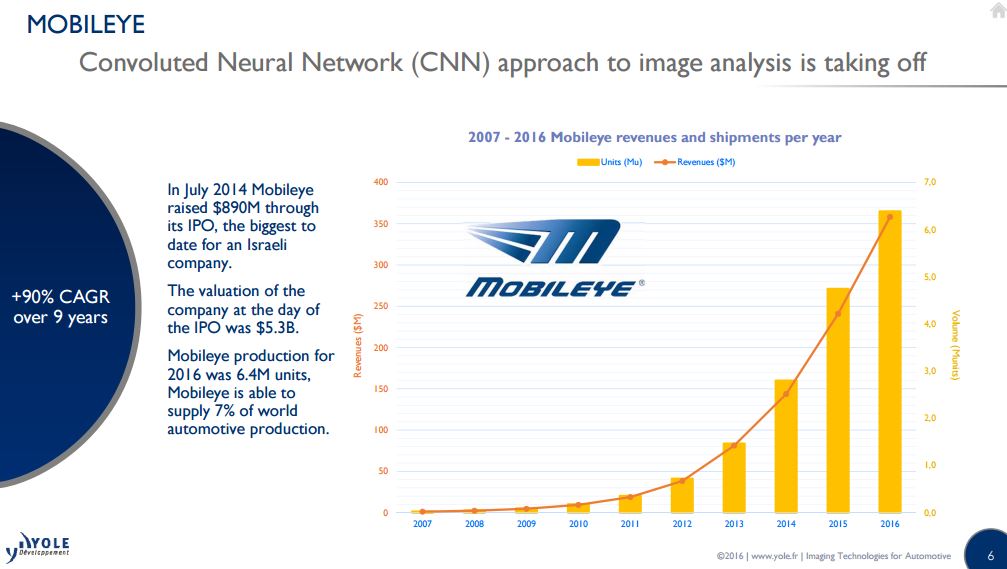 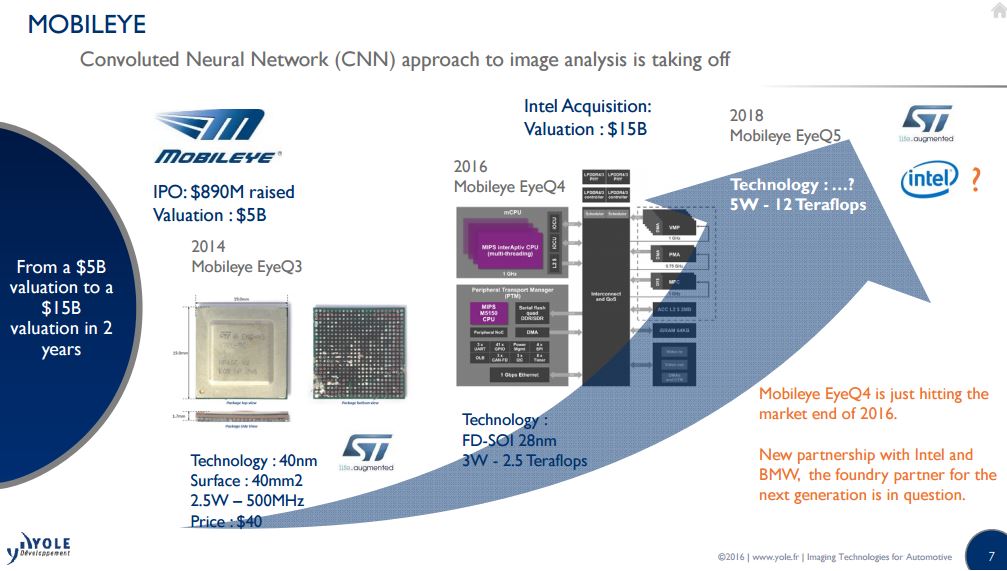 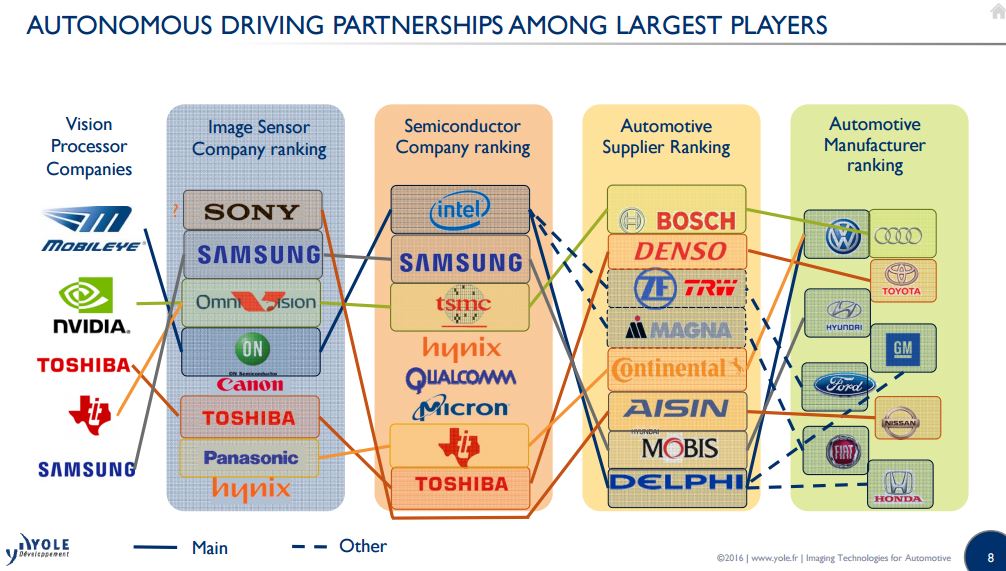 Imaging technology, which is currently mainly cameras, is exploding into the automotive space, and is set to grow at 20% CAGR to reach $7.3B in 2021

Beyond the hype and tumult, sensor technology has ushered in one of the car industry’s biggest evolutions – one that will ensure a bright future for sensor providers and the semicondutor industry!

Computing and AI Technologies for Mobile and Consumer Applications 2021