Yes, microLED display is a hot topic and, yes, Apple is actively working on developing the technology in-house. They have been working on intellectual property (IP) development to master all key elements of this new display technology. The expectation is they will later decide which companies (including Apple, potentially) will take care of the design and production. Let’s deep dive now on the status of the development of microLED display, which company owns which patent and the real involvement of Apple in this new industry. This analysis is extracted from the recent Yole Développement report, done in collaboration with KnowMade, on the microLED patent landscape (more on MicroLED Displays: Intellectual Property Landscape).

Samsung’s giant 146” microLED TV, named “The Wall”, was unambiguously one of the stars of 2018’s Las Vegas Consumer Electronics Show. It didn’t matter that it was actually not based on microLED technology but rather on more traditional SMD LED packages, similar to already well established small pitch LED video-walls. In any case, the $300,000 display generated massive buzz and greatly contributed to popularize the term microLED within the technology community. 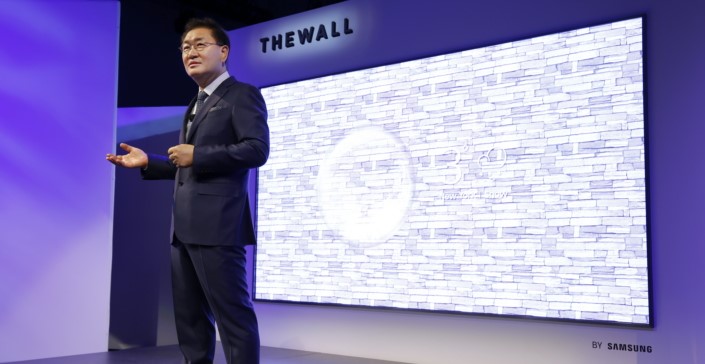 Earlier this week, Bloomberg published an article highlighting microLED which generated substantial interest and debate from Wall Street. In the article, we learn that despite some ups and downs since it acquired the microLED start up Luxvue in 2014, Apple is still committed to the technology and hoping to begin mass production within the next few years.

Yole Développement’s recent report “MicroLED Displays: Intellectual Property Landscape” confirms substantial microLED IP development has been underway at Apple. The report contains a thorough analysis of more than 1,500 patents identified as relevant to the microLED field (more information on MicroLED Displays: Intellectual Property Landscape), and Apple ranks first in term of the size, strength and depth of its portfolio with more than 60 patent families. 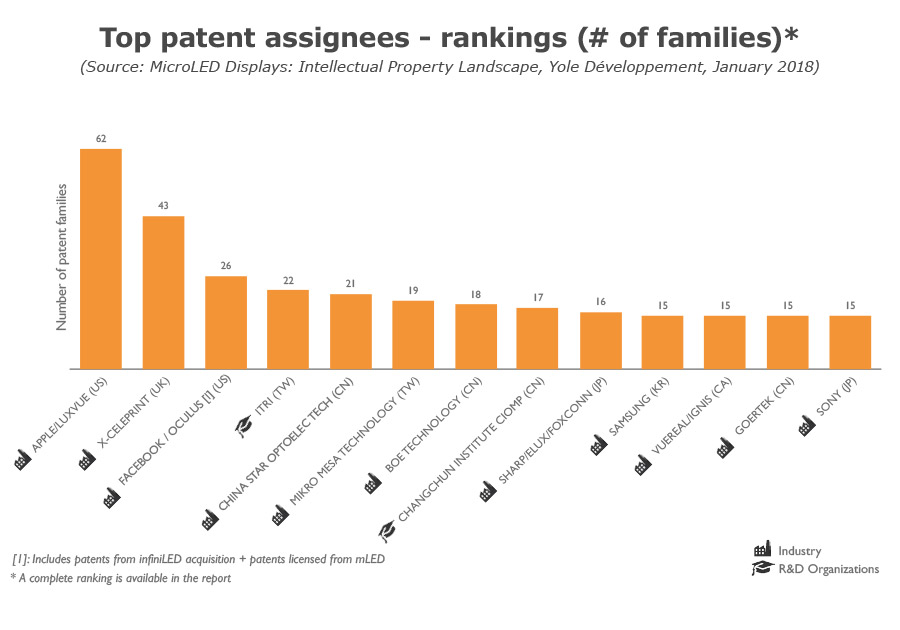 The company’s portfolio covers many thrust areas and shows a strong commitment to tackle all the major technology bottlenecks that have so far prevented the technology from reaching the market. The bulk of the development effort, however, is focused on transfer, assembly and interconnects, with more than 40 patents. The emphasis is on the company’s MEMS-based microchip transfer technology that was at the core of Luxvue effort. Other key patents cover multiple aspects of microLED technologies such as improving the efficiency of microLED chips, another challenge that has been vexing companies trying to leverage the large efficiency gains that microLED display could offers. Color conversion, light management, pixel and display architectures, testing, and integration of sensors are other key aspects which Apple is addressing in its portfolio. 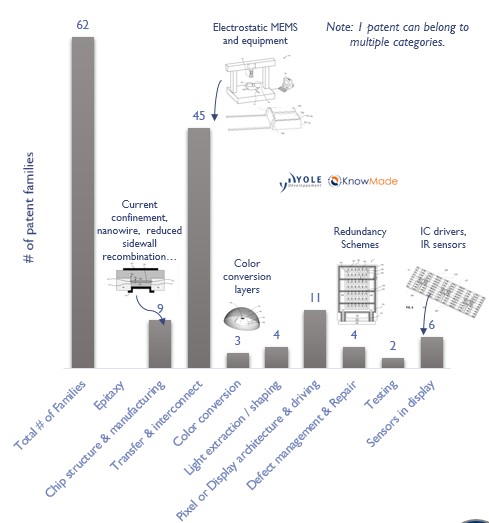 A strong and broad portfolio is a good indication of a company’s technology advancement. However, it’s not enough to guaranty full freedom to address the market with exclusivity. While the bulk of the microLED display research effort started around 2010, digging deeper into the global microLED IP landscape reveals some important patents filed by companies like Sony, Sharp and various research organizations all the way back to the early 2000’s.

Enabling microLED displays requires bringing together three major levels of expertise: LED, transistor backplanes (glass or Si-CMOS based) and chip transfer. The supply chain is complex and lengthy compared to that of traditional displays. Each process is critical and managing every aspect effectively will be challenging. No one company appears today positioned to execute across these multiple technologies and be able to vertically integrate all of the components.

The IP landscape reflects those challenges through the variety of players involved. Only a few companies, like Apple, have a broad microLED IP portfolio, but enough have patents on key technology bricks to predict that complex licensing and legal battles will arise if and when microLED displays enter volume manufacturing.

In any case, with more than 120 companies and research organizations involved in microLED display development, the technology appears to have gained sufficient momentum and credibility to expect the first commercial products in the near future, as soon as 2020 according to most industry observers. Which products come first to market will result from a complex interplay between technology maturity, the evolution of competing technologies such as OLED and Quantum Dots, company strategies and specific supply chain requirements for each application.

For the short and mid-terms, our bets are on microdisplays for AR/MR and head-up display applications as well as wearables, an area where Apple is well positioned to be first to market. Smartphones and TV are more difficult nuts to cracks, both in term of technology and supply chain requirements. Assembling the 25 million to 100 million individual microLEDs that constitute a 4k or an 8k display is infinitely complex and requires ultra-precise, yet very high throughput technologies. Using existing state of the art pick and place equipment, it would take one tool more than 150 days to assemble a single 8k TV!

But for many, microLED could be the holy grail of displays and an opportunity to strongly differentiate from the crowded LCD and soon-to-be-crowded OLED display industries. Recent investments by Facebook, Sharp/Foxconn, Google, Intel and Samsung confirm the growing interest for the technology and point toward a challenging but exciting future for microLEDs.

The Yole Développement 2017 report on MicroLED Displays provides detailed market forecasts and industry analysis, including potential patent applications, outlines of who is developing what, the potential supply chain, and more.

MicroLED Displays : Intellectual Property Landscape
Which companies own patents in microLED display? What are their major thrust areas and portfolio strength? – More

MicroLED Displays
Hype and reality: hopes for smartwatches and beyond must overcome technical and manufacturing challenges – More