The market for LiDAR in automotive and industrial applications is expected to reach $5.7B in 2026 from $1.8B in 2020, representing a 21% Compound Annual Growth Rate (CAGR). According to Yole’s LiDAR for Automotive and Industrial Applications 2021 report, automotive is expected to make up 41% of the market in 2026, with a market size of $2.3B. Recently, several design-wins between LiDAR suppliers and OEMs have been revealed. These indicate that the industry and the technology are becoming more mature. With these design wins, significant LiDAR volumes are expected toward the 2023-2024 horizon.

In this context, Alexis Debray and Pierrick Boulay, Market and Technology Senior Analysts at Yole Développement, had the opportunity to talk about LiDAR with Jun Pei, CEO and co-founder of Cepton.

Discover the details of their discussion below.

Yole Développement (YD): Could you please introduce Cepton and yourself, and your position within the company?

Jun Pei (JP): Cepton is a Silicon Valley LiDAR company founded in 2016, with a focus on developing automotive LiDAR for ADAS applications. My name is Jun Pei, and I’m the CEO and co-founder.

YD: You have developed a LiDAR technology called Micro Motion Technology (MMT). Could you explain to our readers how it is different from other LiDAR technologies and the advantages of MMT?

JP: MMT is a unique imaging technology used for LiDAR. It utilizes a voice coil technique that is similar to a loudspeaker. A proprietary optical array is connected to the voice coil and a micro motion is generated when the voice coil is energized. This micro motion enables the LiDAR to scan the image.

As a result, this scanning mechanism is frictionless with an infinite lifetime, just like a loudspeaker. It is also free of any scanning mirrors, featuring the simplest optical path that yields the highest efficiency and lowest component count. Unlike many other imaging techniques that use high precision or esoteric components, MMT is an elegant solution that strikes a balance between cost, performance, and reliability.

MMT is agnostic to any wavelength of choice or detection modality. It can be used with either 905nm or 1550nm lasers and either TOF or FMCW detection.

YD: You have recently communicated a design win with a Detroit-based OEM. What are the challenges you needed to overcome to be awarded this win by an OEM? What made the difference with the other competitors?

JP: The most critical factor to be considered when working to secure a design win is the right balance between performance, cost, and reliability. Missing any one of these three essential elements will prevent one from building a successful product.

Many competitors would focus on performance only without paying attention to the cost factor, hoping the cost would automatically decrease with scaling. However, we believe that the winning formula is all about what can be achieved today with existing components.

Also, having a Tier 1 partner to bid for an OEM RFQ is crucial in achieving a successful outcome. The only trustworthy cost numbers should come from a Tier 1 supplier responsible for delivering the final product and vouching for its quality and reliability. Koito Manufacturing has been the Tier 1 supplier for this Detroit-based OEM for the past decades. Therefore, when they joined forces with Cepton because of our MMT LiDAR technology, we became the top choice among as many as thirty to forty LiDAR suppliers.

YD: What is your strategy to achieve low costs and automotive grade qualification at the same time?

JP: The most critical factor in accomplishing both automotive grade and cost with scaling is to partners with a solid Tier 1 company that has gone through all the complex work processes for their previous automotive products. The experience at a Tier 1 has been accumulated over decades, and it is rather unlikely for a new technology startup to duplicate it in a short time.

In addition to Tier 1 support as the backbone, it is also important to have a balanced design approach between performance, cost, and reliability. The winning product needs to factor that in from the design phase, and Cepton’s MMT LiDAR observed these crucial requirements from the very beginning.

YD: Could you describe the market dynamics for the different levels of ADAS, robotaxis, and autonomous shuttles?

JP: There is a clear indication that ADAS L2+ is coming with force and will mature over the next few years. I do believe L3 ADAS will become a reality within the decade. Features such as Autopilot from Tesla, Super Cruise from GM, or the newly announced Blue Cruise from Ford will greatly increase the drivers’ safety level while bringing an increasingly higher level of autonomy. The driver experience with these new features will likely solidify ADAS’ essential position in all future consumer and industrial automobiles.

On the other hand, the prospect of robotaxis and autonomous shuttles is much less evident in the near future. In all these applications, technology advancement is only one factor of their success. The social and legal aspects need to be carefully considered, while proper legislation must be in place before any significant scale deployment. It will be an evolutionary process, and we should see slow-paced development in the next decade with perhaps an accelerated proliferation the decade after.

YD: Could you explain your positioning in the automotive supply chain? How best can you achieve large automotive volumes when being a relatively young company like Cepton?

JP: Cepton considers itself to be a Tier 2 supplier, providing critical technologies and components to Tier 1 suppliers such as Koito Manufacturing of Japan. The classical supply chain model of Tier 2 to Tier 1 to OEM has been established for over a century, and we believe the only way to achieve higher volume with LiDAR being such a safety-critical automotive part is by adopting this exact model.  Without a Tier 1 vouching for the technology, the quality, and the reliability, no OEM would adopt LiDAR from a young company with no history of supplying to the automobile industry.

YD: Could you give some hints at where LiDARs will be placed in ADAS vehicles in the near future and beyond?

JP: Two of the key benefits of Cepton LiDARs are their small form factor and low power consumption. With those design advantages, Cepton offers the flexibility to put its LiDARs in various places, such as behind the windshield, inside the headlamp, in the bumper, or inside the facia. For our design win with the Detroit-based OEM, we are not at liberty to disclose the exact location of the implementation, but it is a coveted location with good visibility and well protected from environmental disturbance.

YD: When analyzing the publicly known design wins, it appears that mechanical scanning using 905nm edge-emitting lasers are dominating compared to other technologies. How do you explain it?

Cepton’s MMT strikes this balance by bringing reliability and affordability into a mechanical LiDAR that is high-performing. The loudspeaker technology with voice coil, though mechanical in nature, is highly reliable and proven for the past century in automotive applications.  As a result of combining this technology with the discrete LiDAR emitter and receiver channels that have proven to perform with distance sensitivity, Cepton has brought a successful product into the mass market and achieved the most successful design win.

YD: Other technologies are emerging, based on components like VCSELs, SPADs, SiPMs, or different ranging technology like FMCW. What would be the trigger to have a more extensive adoption of these components? To what extent can FMCW LiDAR penetrate the market. How will Cepton adapt to these new technologies?

JP: Indeed, many emerging technologies have triggered many discussions about the future of LiDAR. However, we need to get through the present phase before the future arrives. Mass-market adoption of new technology is always based on the value it provides to the consumers. Whether it is a higher level of safety or a better driving experience with autonomy, its success is always a balance between the value and cost. Adoption will happen naturally when a LiDAR’s cost is justified by its benefits.

Cepton’s MMT is a frictionless imaging technology, mirrorless, and of very low cost. It is agnostic to emitter wavelength or detection modalities. When new components and submodules such as VCSELs and FMCW are accessible and cost-effective, Cepton can adopt these with our MMT to form effective LiDAR systems.  At the moment, 905nm with TOF detection seems to be the most practical and available emission and detection that is already automotive qualified.

YD: The automotive market is quite attractive for LiDAR players, but other markets such as smart infrastructure are emerging rapidly with a lot of demand. How do you see this market growing?

JP: Other markets will grow very naturally, and there are a number of different applications. However, they will be of a much smaller scale compared with the automotive market. The ADAS market alone will be $40B to $50B in the next decade, and the non-auto market for LiDAR will be only a fraction of it. Therefore, while one should not overlook the non-auto market, the biggest application for LiDAR will remain in ADAS for the coming years.

YD: In industrial applications, 2D LiDARs can be used as well. How do you see the competition between 2D and 3D LiDARs?

JP: Yes, but only when the cost is an issue. Once automotive-grade 3D LiDAR becomes available in the $500 range, it will be almost impossible for 2D LiDAR to compete, given the richness of the data that 3D LiDAR can provide. In many industrial applications where efficiency is dependent on environmental data (e.g., warehouse management), 3D LiDAR will eventually dominate all the applications.

Dr. Jun Pei, CEO and co-founder of Cepton, is a serial entrepreneur and technologist in optics and electronics. He developed the first optical and acoustical combination technique in semiconductor thin film measurement and holds numerous patents in the field of metrology. Before co-founding Cepton, Dr. Pei founded AEP Technology to develop advanced 3D instruments and pioneered parallel computing in interference microscopy. Earlier in his career, he worked as a senior scientist at KLA-Tencor in optics equipment and also led engineering team at Velodyne in advancing the HDL-64 Lidar. Dr. Pei received his Ph.D. in Electrical Engineering from Stanford University.

Pierrick Boulay is a Senior analyst in the Photonics and Sensing Division at Yole Développement (Yole). Pierrick works in the fields of Solid State Lighting and Lighting Systems to carry out technical, economic and marketing analysis. In addition, he is also leading automotive activities within the company.
Pierrick has authored several reports and custom analysis dedicated to topics such as automotive lighting, LiDAR, sensing for ADAS vehicles and VCSELs.
Prior to Yole, Pierrick has worked in several companies where he developed his knowledge on lighting and automotive. In the past, he has mostly worked in R&D department for LED lighting applications.
Pierrick holds a master’s degree in Electronics (ESEO – Angers, France).

Alexis Debray, Ph.D., is a Senior Analyst at Yole Développement (Yole), dedicated to the production of technology & market reports and custom consulting projects in the fields of Photonics, Sensing, and Semiconductors.
Before joining Yole, Alexis spent 17 years in Japan. He worked for 2 years developing expertise in MEMS technologies and then for 15 years at Canon Inc. as a research engineer, where he contributed to numerous developmental projects focused on MEMS devices, lingual prehension, and terahertz imaging devices.
Alexis is the author of various scientific publications and patents. He graduated from ENSICAEN (France) and was awarded a Ph.D. in applied acoustics.

LiDAR for Automotive and Industrial Applications 2021
ADAS and robotic vehicles will drive the LiDAR market to $5.7B in 2026, with technology choices and supply chain management being the key enablers for LiDAR implementation. 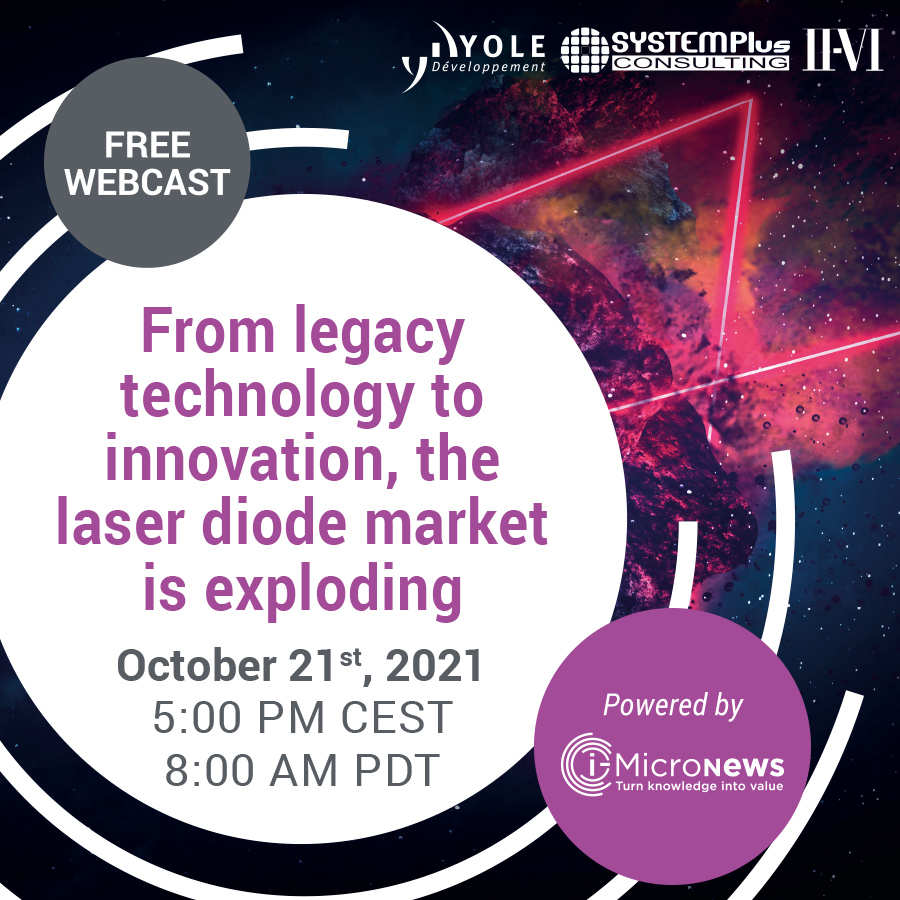