While a second wave of 3D sensing technology integration has been initiated by Android phones, could Time-of-Flight be the decisive technology for future consumer applications?

With the introduction of the iPhone X in September 2017, Apple set the technology and use-case standard for 3D sensing in the consumer space. Two years later, Android phone makers have taken a different approach, using Time-of-Flight (ToF) as a 3D sensing approach and are placing it on the rear of the phone.

Compare to structured light, ToF modules only needs a Vertical Cavity Surface Emitting Laser (VCSEL) and a diffuser on the emitter, which is less complex. ToF sensors have now improved a lot thanks to the Back Side Illumination (BSI) technique. They have also gained a cost advantage within a maturing ecosystem. This is the main reason why ToF has won the favor of Android phone makers.

3D rear sensing in mobile has diversified its application use cases. First used for photography, to enhance bokeh and zoom capabilities, it will expand into Augmented Reality (AR) and gaming. Beyond smart phones, ToF modules have a broad application market in front of them, including intelligent driving, robots, smart homes, smart TVs, smart security and virtual reality (VR)/AR. Currently, the application of ToF technology in these fields is still in its infancy.

The significance of the 3D sensing market means the transition from imaging to sensing is happening before our eyes. Artificial Intelligence (AI)-powered devices and robotics are gaining a better understanding of their surroundings, and developing a new level of interaction with humans. Advanced Driver Assistance Systems (ADAS) are a highly anticipated application of 3D imaging and sensing technology. The most important component in this application, LiDAR, is now focused on by a large number of suppliers. There are a wide range of LiDAR technologies to choose from, making the field as a very competitive one.

In addition to ADAS, Automatic Guided Vehicles (AGVs) in the logistics industry, as well as face recognition and face payments in commercial sectors have been very successful. As such, 3D sensing technology is moving towards ubiquity.
Technology providers of global shutter image sensors, VCSELs, injection-molded and glass optics, Diffractive Optical Elements (DOEs), and semiconductor packaging are all benefiting. This latest edition of Yole’s popular report offers you key insights for navigating the 3D imaging and
sensing revolution. 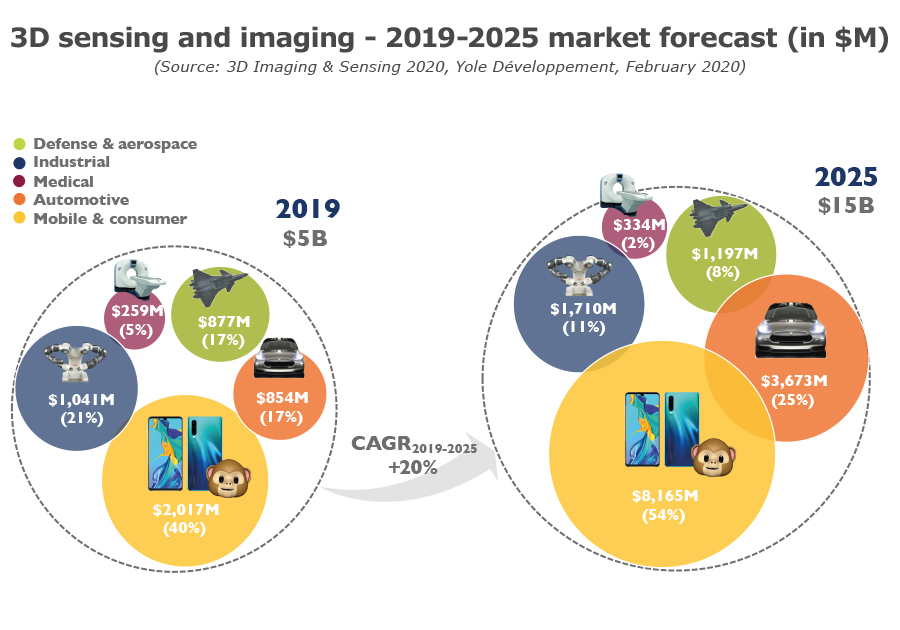 In the consumer world, smartphone players are now quickly revising their own 3D sensing strategies. Apple is expected to use a ToF rearfacing module in its 2020 iPad Pro and even
iPhone, while the front-facing face recognition camera could still use 3D structured light. It is also expected that Apple may use the customized CMOS sensor to expand vision beyond the human eye function, to achieve AR reality navigation and other applications. Apple’s entry is expected to accelerate the penetration rate within the Android side, and the industry is generally optimistic that more 3D sensing ToF modules will be released in 2020. This report builds upon the penetration rate from major mobile phone manufacturers in 2020. Yole’s forecast is that 173 million smartphones with ToF capability will be shipped globally in 2020.

While the 5G era promotes the application of the Internet of Things, the demand for 3D perception increases for various smart devices. ToF will become the mainstream 3D sensing scheme by virtue of its cost advantage and excellent realtime perception ability. Especially in the VR/AR application field, there is a high demand for time delay to avoid vertigo, meaning that ToF is the most suitable spatial positioning technology. In the field of automotive applications, 3D sensing ToF will be used for gesture recognition, in-car driver status monitoring, and out-of-vehicle object detection. In industrial logistics, 3D sensing will find many applications, such as obstacle avoidance systems, such as sweeping robots, and can be used for remote applications outside the home, such as logistics and guide robots. Yole estimates that the volume of 3D sensing ToF modules shipped annually will reach 680 million in 2025, accounting for about 60% of the whole 3D sensing market. 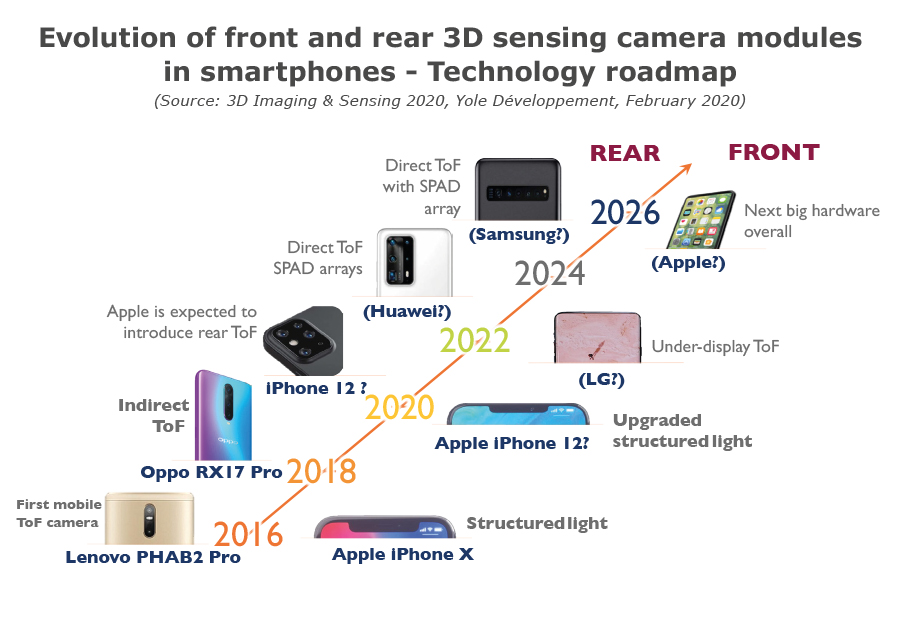 AMS AND LUMENTUM WON THE FIRST ROUND OF 3D: WHAT IS THE IMPACT ON THE SUPPLY CHAIN?

The mobile 3D sensing supply chain is changing rapidly before our eyes. As structured light technology was introduced in iPhones in 2017, companies like Lumentum, ams and STMicroelectronics won this first round. Later, Princeton Optronics (ams) and Finisar were ready to gain VCSEL market access, so the market did quickly become more competitive. In 2019, Finisar was acquired by II-VI, which helps consolidate an existing industrial business. During this period, there were several other big mergers, such as Philips Photonics being acquired by Trumpf and ams swallowing OSRAM. Trumpf and ams are both actively moving into the Android camp’s 3D camera supply chain, providing VCSELs to Samsung and Huawei respectively.

In China, another player is entering the 3D sensing ecosystem. The VCSEL output beam of the flood emitter for ToF requires no coding and is therefore easier to produce. This helped a Chinese supplier called Vertilite to join the market. They have already won orders from Huawei for 3D sensing in 2019. This move was also driven by the policy of China cultivating local supply chains in the middle of the US-China trade conflict.

ToF sensors are key components for mobile rear 3D sensing. ToF camera technology was first applied to the Phab2 Pro smart phone in 2016, which was using pmd and Infineon’s ToF array. A year before that, Sony bought SoftKinetic, a Belgian gesture-recognition company with its well-known DepthSense ToF sensing system. This move brought Sony from a zero market share position in 3D sensing receiver chips to 45% by the time ToF camera modules took off in 2019. With its strong technology and supply capabilities, Sony is expected continue maintaining its leadership
position in ToF. But as there has always been competition in this area of CMOS Image Sensor (CIS) chip manufacturing, competition will increase. pmd with partner Infineon recently announced a matching chip. We also expect CIS giant Samsung and STMicroelectronics to bring to market their own indirect ToF array sensors in 2020. Generally speaking, the competition remains very intense among a small group of CIS players.

In the medium term we shall expect more opportunities for M&A as automotive LiDAR applications may come into play. There are a large number of highly com-petitive emerging companies. There are also a few Chinese startups, such as Hesai Technology, RoboSense, and LeiShen Intelligence. The underlying semiconductor products are the same: CIS chips, VCSEL, MEMS, wafer-level optical elements. Definitely, the ecosystem is not expected to stand still in 2020. 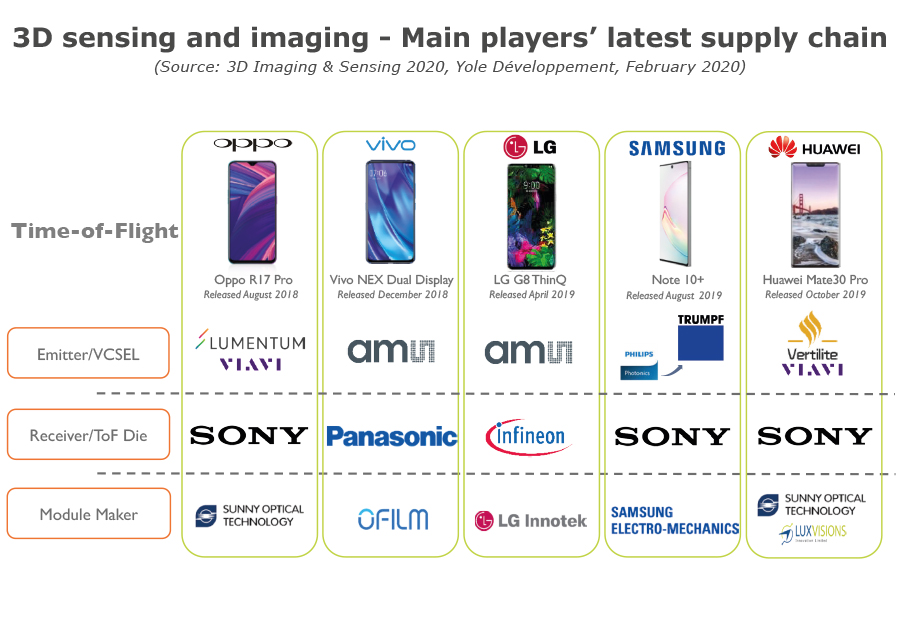