There has been a lot of movement in the IoT field with the arrival of 5G. With the development of network slicing, a technology mainly intended for IoT. Moreover, regulators are opening frequencies for private networks that private companies would directly license. Furthermore, new 5G connectivity industrial modules are emerging. In general, the value chain is starting to mature and now offers convenient solutions for IoT developments using cellular connectivity; It is expected to solve most of the previously seen IoT adoption and development problems. It also means that the volumes for 5G IoT and cellular IoT, in general, will start their ramp-up quite soon. However, they won’t reach the unrealistic advertised volumes. Indeed, cellular IoT will persist as a combination of niche applications without the awaited expansion into personal area networks, i.e., wearables and consumer electronics. In this context and following our reports on 5G telecom infrastructure and on RF front-ends for mobile handsets, we decided to publish a report dedicated to Cellular IoT and 5G’s impact in this domain. It describes the general market dynamics and offers realistic prospects regarding the market potential at the RF front-end level.

Scope of the report 4

A LIMITED NUMBER OF POTENTIAL APPLICATIONS

Wireless connectivity of things has stopped being an abstract concept. Today, everyone has their personal experience with connectivity or at least has heard about it. It could be through Bluetooth earphones, a fitness band or the connection of their electric meter to their home Wi-Fi. These applications, often using Wi-Fi or Bluetooth, are referred to as Personal Area Networks or Home Automation. This market, which is based on short-distance, non-critical operations, already exists. Nevertheless, the generalization of the Internet of Things (IoT), connected devices in all aspects of our society and industries, has not fully happened yet.

Multiple approaches have been tried in the past to develop the IoT. They have used unlicensed frequencies, through protocols like the IEEE802.15.4 based Zigbee or Z-Wave, the LoRaWAN and Sigfox protocols, or longrange Wi-Fi. But this has not been a success, mainly due to the general requirement for data reliability and security, meaning confidentiality, integrity, and availability. But this is changing now with cellular protocols aimed at IoT.

These cellular protocols range from the low data rate NB-IoT to the very high data rate, high reliability, low latency 5G Cat20. The latter has finally started to see traction from the industry.

Cellular deployment is expensive, either on a capital expenditure standpoint for private networks or an operating expenditure standpoint when using public networks. But 5G offers unprecedented capabilities in terms of data security, creating a market opportunity for critical applications. These are niche applications, for example, in highly automated industrial environments, where wireless connectivity adds a lot of value. Other applications range from machine vision to autonomous guided vehicle monitoring. They are now motivating investment in 5G deployments, thus opening the market for all other cellular-based deployments to come.

Market volume is expected to reach 1B devices in 2026. It started in 2020 with a volume of 298Mu driven by the replacement of 2G/3G devices like points of sale or telematics.

These volumes are still very far from the billions of industrial connected devices anticipated by tech companies several years back. This is mostly due to the niche nature of IoT applications. But this still represents a big market opportunity, reaching $859M in 2026 from $257M in 2020 with a 22.3% Compound Annual Growth Rate (CAGR) for 2020-2026 at the radio frequency (RF) front-end component level. 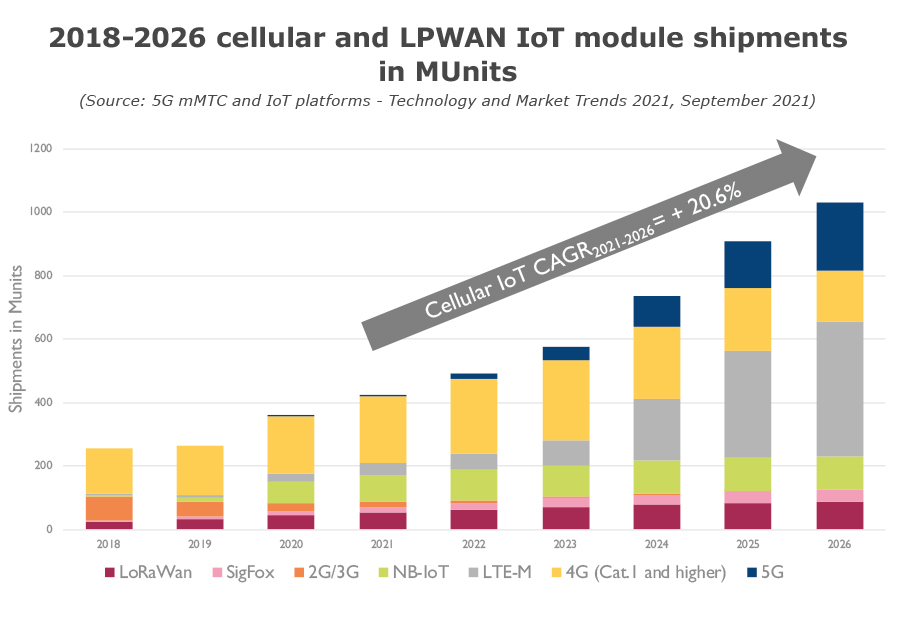 Transmission protocols shape the IoT technological landscape. Multiple protocols exist based on different standards. Today, the protocols of interest are the 5G related protocols, ranging from the now well-known NB-IoT and LTE-M, to the 5G Cat20 protocol, also referred to as simply 5G. In between these, a wide variety of LTE-based protocols also exist, offering a broad range of solutions, all 5G forward compatible. The most used today are LTE Cat1 and LTE Cat4.

Thanks to the coming 5G stand-alone, these LTE categories will benefit from the expected 5G SA, especially at the network level. Since it will allow for new functionalities such as Network Slicing and the digitalization of the physical network for efficient usage.

In general, cellular protocols are expected to be the go-to solutions for long-range connectivity, and critical short-range connectivity. The only strong competition is coming from Wi-Fi at short range. All other IoT protocols that have appeared in the past have not managed to launch. We are likely never to see new unlicensed developments in this area, at least none with great market success, in case of cellular IoT worldwide adoption.

If cellular IoT fails for reasons yet unknown and unanticipated, this would once again delay the expected adoption of IoT. Instead, we would be waiting for a convenient, innovative approach, as we have been for more than a decade. 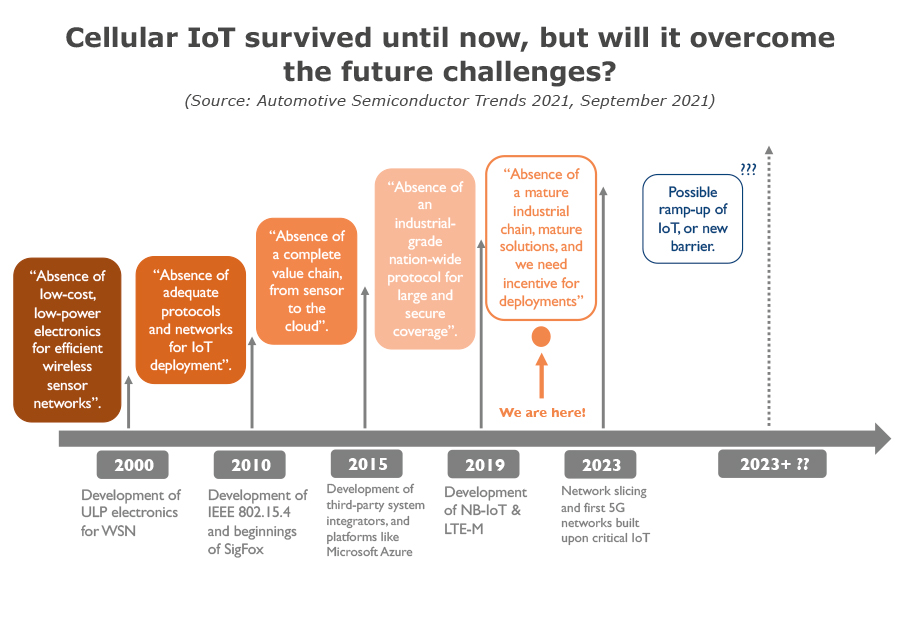 WHAT SHOULD WE EXPECT FROM CELLULAR IOT FIVE YEARS FROM NOW?

We expect to see increased use of cellular IoT in 2023 thanks to worldwide deployments of true 5G public networks, using standalone 5G, permitting network slicing.

We also expect to see a new RF module offering in 2023, given that today the only solution is provided by Qualcomm at a quite expensive cost.

Developments are awaited from other players, like Sequans Communications. Qualcomm will also soon release its second generation of 5G modules, expected at half the price of its current solution. The IoT industry needs this diversification and strengthening of supply.

By 2023, we will also see more private networks deployments. Whereas today they are starting at pilot level and are meant for highvalue applications. But, once deployed, they are expected to be used for lower value IoT applications, especially those using LTE-M or the future NR-Light protocols.

Therefore, the future ramp-up of IoT is expected through the conveniently timed conjunction of events at public network, devices, and private network l evels f or 2 023. Once this cellular IoT adoption happens, the democratization of the technology will finally take place. It will be followed by industrial consolidation in the longer term, and ubiquitous use of the licensed radio frequencies for non-consumer purposes. 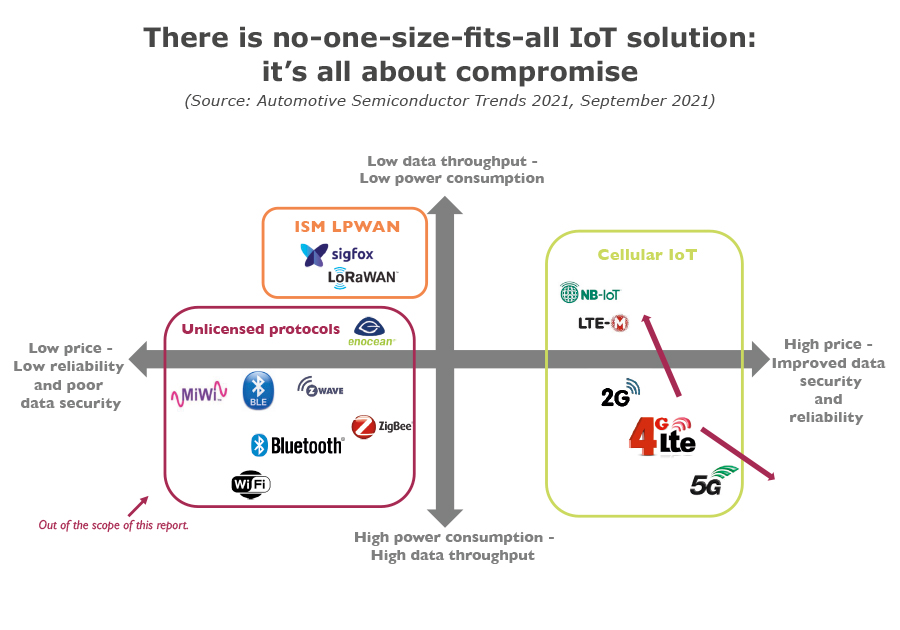