The battle for 5G still rages: integration in-module or with discrete parts?

Familiarity with the mobile phone’s RF front-end architecture is critical to understanding this market. Leveraging System Plus Consulting’s extensive teardown analysis (more than 50 phone teardowns realized), Yole Développement (Yole) has built an overall picture of RF front-end architecture. The main phone manufacturers differentiate from each other in the RF field by adopting either an integrated or a discrete approach. In the former segment, market leaders Samsung and Apple, along with smaller OEMs like Sony, LG, Google, and ZTE, are moving towards integration with complex RF modules from Broadcom, Skyworks, Qorvo, Qualcomm, and Murata. “Integrated” players prefer to focus on the user experience with innovative features like “Face ID”, wireless charging, AI camera, gesture recognition, and the human machine interface, thus leaving most of the RF front-end’s complexities to the RF module makers.

Meanwhile, markets challengers like Huawei, Xiaomi, Oppo, and Vivo, which drive as much volume as the market leaders, favor a discrete approach whenever possible. This allows them to keep the RF bill-of-materials (BoM) as low as possible in order to offer aggressive selling prices in this competitive market.

A comparison of teardowns for Huawei’s P20 Pro and Samsung’s S10 illustrates these opposing strategies. The P20 Pro RF board is made of 45 discrete components and four integrated modules (incorporating 25 components), while the Samsung S10 comprises 17 discrete components and eight integrated modules (incorporating 71 components). Consequently, the BoM for the RF front-end in the S10 ends up being double that of the P20 Pro, even though both devices exhibit similar downlink-speed performance. Also, both devices support more than 30 bands and use similar technologies, such as carrier aggregation and 4×4 MIMO.

5G radio’s introduction in mobile phones definitely adds more complexity to the already complicated RF front-end, and it is likely to exacerbate the phenomenon since price pressure on the RF front-end will be even bigger. Indeed, 5G’s penetration rate in smartphones will depend not only on network availability and proposed use-cases, but also on device affordability at the consumer level. Accordingly, we can expect a 30% ratio of discrete components in value to be maintained from 2018-2025.

If LTE and 5G components are cumulated in 5G mobile phones to ensure either the “non-standalone mode’s” operation or for a 5G non-covered area to be connected with LTE, then the question of whether 5G sub-6 GHz and 5G mmWave will both be integrated in the phone is not so straightforward. The cost-over-benefit ratio for the consumer could be too high – plus, a spectrum-holding analysis of the world’s main carriers suggests a divided approach. For example, the first 5G devices were released with different SKUs, depending on whether the carrier integrated a sub-6 GHz radio link or an mmWave radio link. Ultimately, 5G could lead to a regionalization phenomenon instead of being globalized, as was the case earlier for LTE. 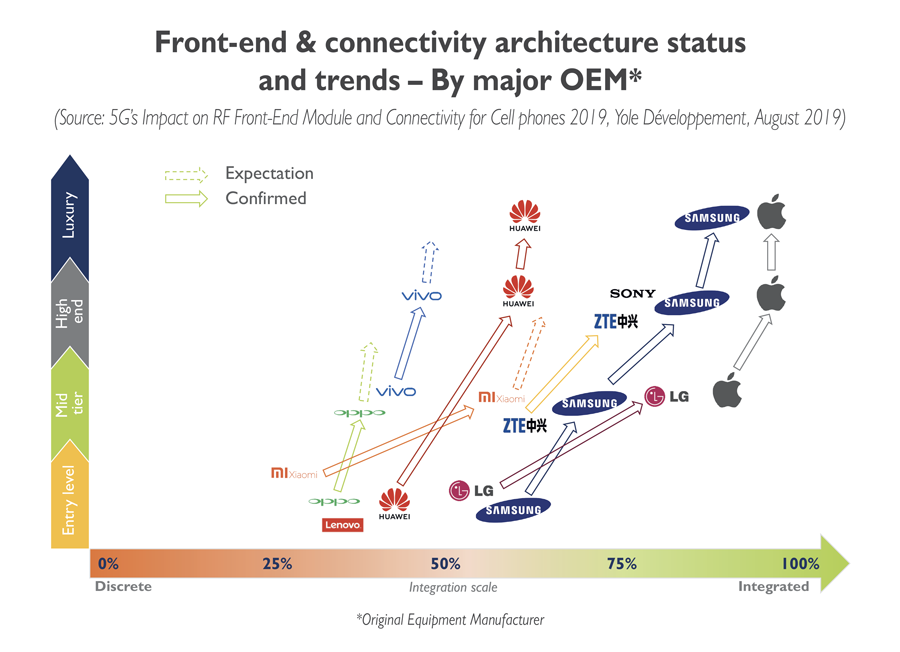 Consumer demand for mobile phones weakened in 2018, resulting in a market decline. In this context, the competition has intensified, creating an emulation to push 5G forward. With LTE, RF front-end market growth came from carrier aggregation and MIMO technologies. 5G will augment RF front-end market growth with additional frequency bands, dualconnectivity implementation, and the transition to 4×4 MIMO in the downlink direction, plus a trend towards 2×2 MIMO for the uplink. As a result, the overall RF front-end market (which was $15B in 2018) will grow at an 8% CAGR, reaching $25.8B by 2025. Integrated module growth is forecast at an 8% CAGR from 2018 – 2025, while discrete parts will grow 9% over the same period. Among discrete parts, antenna tuner will grow the most (13% CAGR) because of the combined implementation of higher-frequency bands and 4×4 MIMO, leading to an increasing number of antennae and/or antenna tuners.

The fact that 4×4 MIMO will be mandatory for 5G (at 3.5 GHz and above) will positively impact LNA component growth for either a discrete approach or in-module implementation. And on the mmWave side of 5G, antenna-in-package (AiP) devices have started
generating revenue in 2019, with the U.S. being its first target. Yole anticipates this market will reach $1.3B by 2025.

Given the integration of LNA with switches, the industry is moving to 12” RFSOI, thereby limiting growth opportunities for silicon germanium. In the filter domain, the legacy SAW technology will remain stable, while thin-film SAW, BAW, FBAR, IPD, and MLC technologies will see growth opportunities.

This report provides a technology breakdown for each forecasted component, as well as a wafer-start prediction (by technology platform) up to 2025, thus highlighting the technology transition associated with 5G. 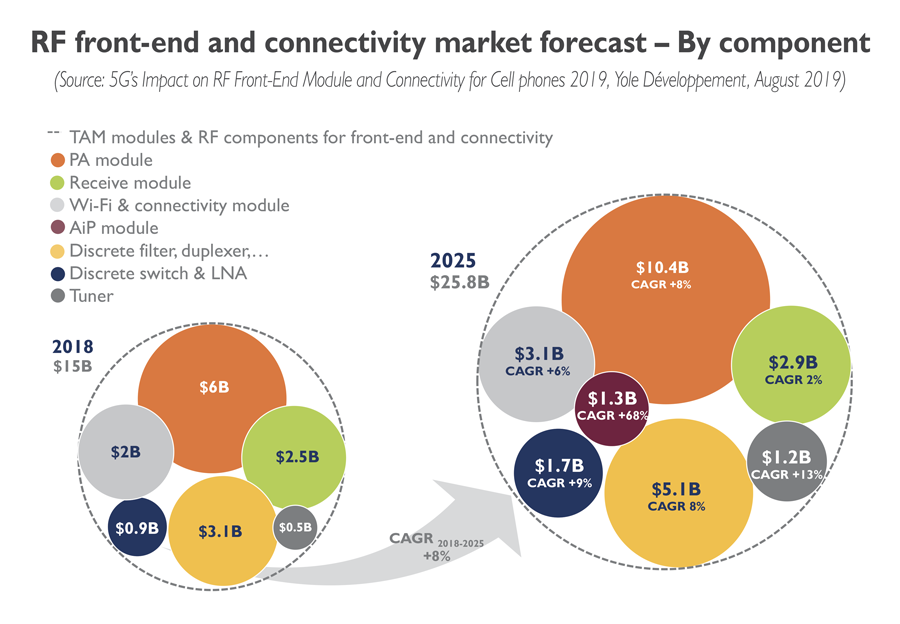 Leveraging System Plus Consulting’s teardown analysis, a highly detailed market share is provided in this report. The RF front-end leaders still share 81% of the market, with Murata leading ahead of Skyworks and Broadcom. Qualcomm, which is already strong in LNA, is catching up along with Qorvo, thanks to the aggregation of TDK Epcos’ filter business. Established companies like Infineon, Sony, Taiyo Yuden, NXP, and Wisol also possess a market slice. These companies generally have manufacturing capabilities for supplying LNA, switches, tuners, and filters, which gives OEMs an alternative to the RF front-end market leaders. Moreover, a variety of fabless companies are emerging, especially in China. Unisoc RDA, Airoha, Richwave, Smarter Micro, Huntersun, and Maxscend are several examples of players scoring more and more design wins amongst the Chinese OEM brands. Obviously, foundries and design houses support this business model for compound semiconductor, silicon, and even acoustic wave filter.

For each player in the RF front-end, a market share breakdown by component is included in this report, along with a company outlook describing each player’s development strategy for 5G and beyond. 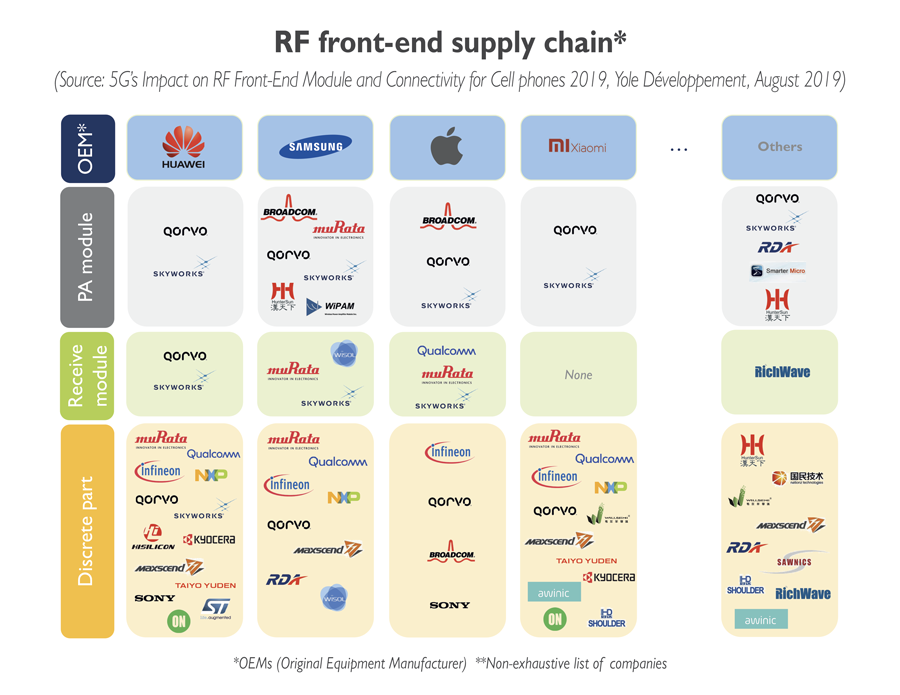 Bundle offer possible for the 5G’s Impact on RF Front-End Module and Connectivity for Cell phones 2019 Report by Yole Développpement, contact us for more information. 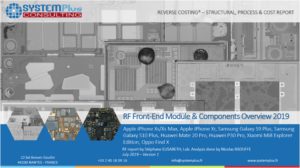