What did we get right and wrong? 9

5G – AN ATTEMPT TO ENLARGE A STEADY, CONSOLIDATED MARKET

The telecom infrastructure market has not moved much in the past decade in terms of the value of operators’ investments. Customer pricing also keeps decreasing, and building new infrastructure keeps showing smaller and smaller returns on investments for telecom operators. In this context, an attempt to create new markets and enlarge operators’ reach to customers beyond mobile phones created 5G. By modifying the network to allow for ultra-fast, ultra-reliable and ultra-flexible communications, 5G’s aim is to expand to new opportunities, such as enterprise-owned networks, industrial automation or road safety. Nevertheless this is a bet on the future, and actual infrastructure market growth is not expected in the foreseeable future at site level. Yole Développement (Yole) expects the global market to remain steady and oscillate between 1.7 and 2 million macro site antenna systems shipped a year between 2018 and 2025. On the other hand, a new type of smaller infrastructure should still see notable growth. That infrastructure is referred to as ‘small cells’, and should reach  shipment levels in the high hundred thousands of units by 2025. 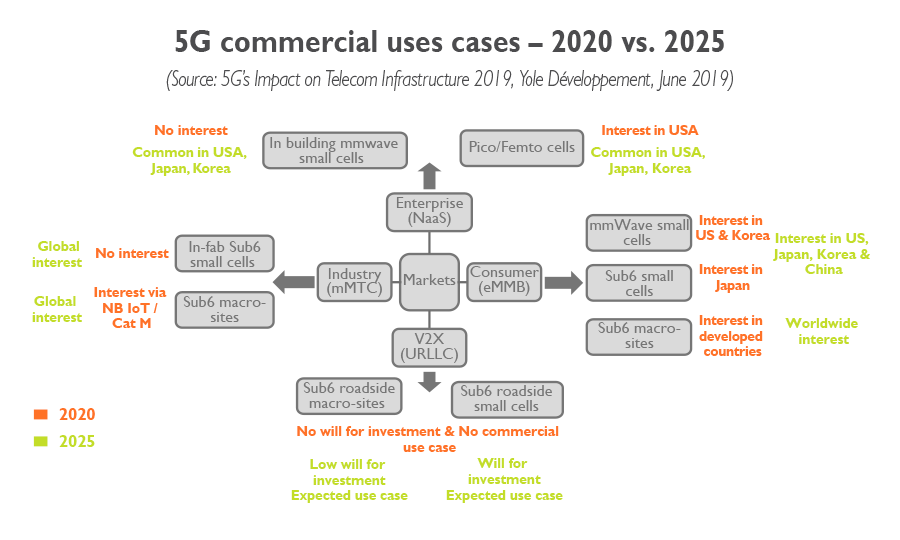 In the infrastructure market, consolidation has already occurred and it is dominated by only a few players, namely Huawei, Ericsson, Nokia, ZTE and Samsung. But even though no new entrant is expected, some major changes are happening. They are due to recent geopolitical events, such as Huawei’s ban in the US, and the low interest in 5G in developing countries. The players will remain the same, but their market share will evolve. Yole’s analysts expect Samsung to sharply increase its global presence thanks to both its expertise in small cell developments and the ban on Chinese technology in developed countries. Indeed, one of the outcomes is that operators will need Samsung to increase its presence, as dealing with only two infrastructure suppliers, namely Nokia and Ericsson, represents a sourcing risk.

The global landscape at network level will not move much before 2025. But it will definitely change in terms of technology and antenna systems, thus completely restructuring the radio frequency (RF) component industry. On one hand frequencies are going from less than 3 GHz to up to 6 GHz for macro deployments, while small cells exploit millimetre-wavelengths mm-waves). Meanwhile RF line power levels in front-ends will decrease from a few hundred watts to down to a few watts in macro site antenna systems, thanks to massive MIMO and active antenna systems implementation. With these new higher frequencies, the GaN players like Sumitomo Electric Device Innovations, Cree, Qorvo and RFHIC should see growing interest in their products. Also, very low power levels are required for future small cell developments, in the hundreds of mW per RF line in small cells. Giants from the mobile RF front end industry like Broadcom and Skyworks are expected to come and compete with infrastructure players in the longer term. 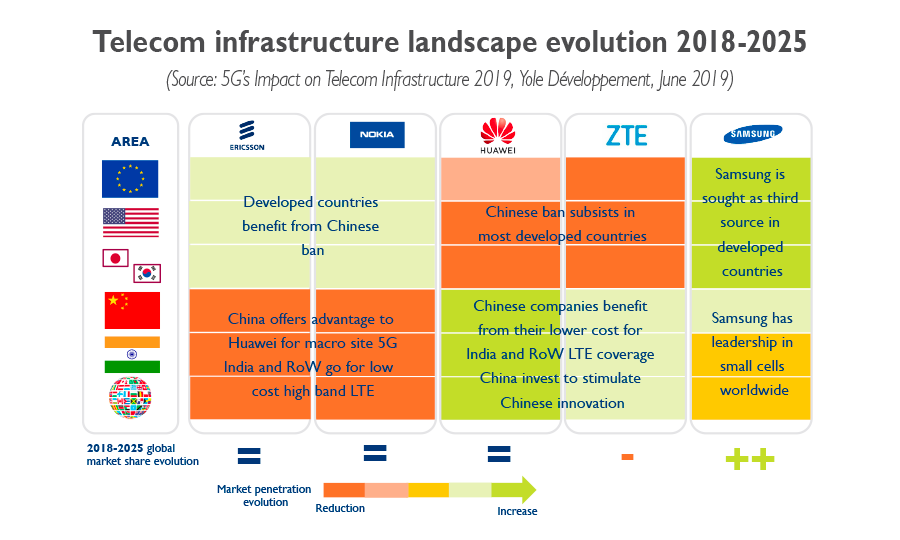 The most common antenna system today is the combination of a remote radio head (RRH) with a passive antenna array for signal transmission. This combination uses high power components, with a few RF lines per system handling up to a few hundred watts of RF power each. These devices are expected to remain the main approach for coverage deployments in developing countries and China, or in rural areas. On the other hand, in zones where network improvement is sought instead of higher coverage, the trend is for new generations of antenna systems that include beamforming and multiple streams. These new antenna technologies are active antennas, meaning that each and every single antenna element will have a dedicated low power RF front-end feeding it. This is a drastic change of approach as it means that instead of a few RF feeds of about a hundred watts, the system will see up to 64 feeds of a few watts each. This changes the component types, their substrates, their form factors, their key characteristics, and so on. Small cells and mm waves will also bring innovations, with the need for components working on frequency bands in the tens of GHz, and at power levels down to a hundred mWs. This is creating a completely new market, and new opportunities for new entrants. 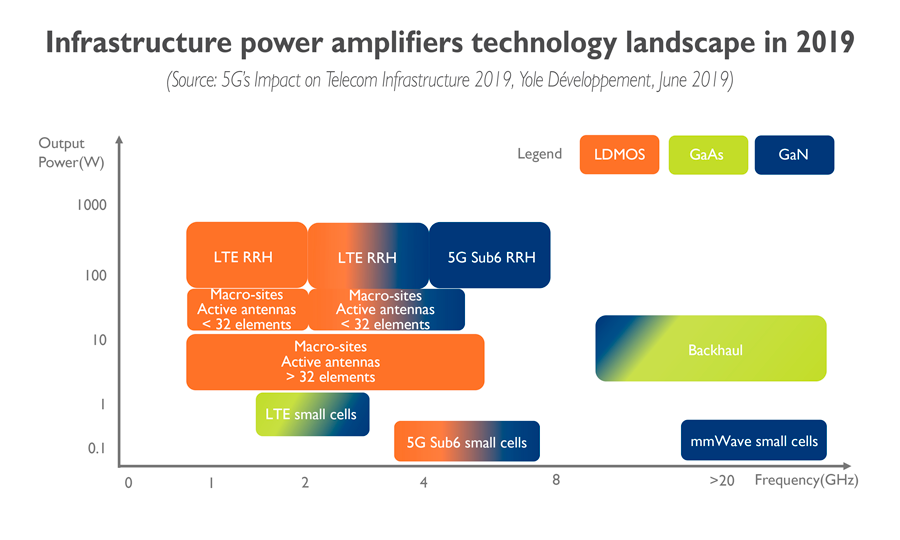