The market for MEMS microphones and ECMs, micro-speakers and audio ICs will be worth $20B in 2022.

Table of contents and scope of the report 2

THE AUDIO BUSINESS IS ABOUT TO EXPERIENCE PROFOUND CHANGES

Audio is becoming a key function of multiple existing and new products that increasingly has to be analyzed as a complete landscape compared to independent devices. From mobile phones to cars, from home assistants to drones, audio products like microphones, speakers and audio integrated circuits (ICs) are essential for all the new systems driving consumer electronic markets. The total audio business was worth more than $15B in 2016. With a compound annual growth rate (CAGR) close to 6%, in 2022, the audio device market will be worth $20B and become a key feature in all the applications it is involved in. And there’s clearly room for more added value in the audio supply and value chain, as well as other significant changes.

In 2016, Yole estimates that the MEMS microphone market has almost reached the $1B milestone, with a value of $993M. Combined with the $700M electret condenser microphone (ECM) market, now the acquisition of sound is almost a $2B value market. The µspeaker market is estimated to be worth $8.7B, (meaning speakers less than two inches in diameter). In addition to these two visible elements of the audio chain, the audio IC market, which includes codecs, digital signal processors (DSPs) and amplifiers, is estimated to be worth $4.3B in 2016. 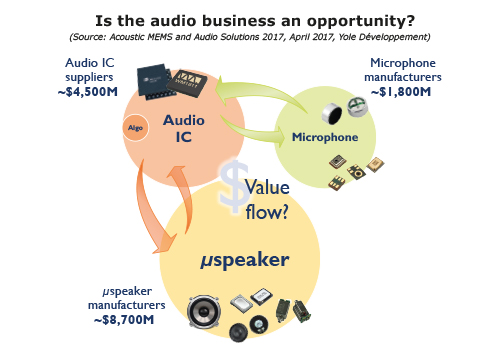 MICROPHONES, MICROSPEAKERS AND AUDIO ICs ARE AT THE HEART OF THE EBULLIENT AUDIO ECOSYSTEM

With the emergence of virtual assistants like Alexa, Cortana, Siri, OK Google and Bixby, microphones are becoming mandatory as the central voice command hub. There is continuous improvement of audio quality including voice recognition, noise cancellation, wind cancellation and person identification. There has also been a multiplication of platforms embedding microphones, including smartwatches, hearables and cars. The microphone market will therefore expand continuously and reach more than 8 billion units by 2022, with an 11% CAGR. New technologies are also around the corner, potentially disrupting the existing equilibrium between MEMS microphones and ECM.

In the meantime, micro-speakers are also growing thanks to classical dynamic speakers and balanced armature technologies, both valued at $8.7B in 2016. These two technologies will compete in the future with MEMS speakers, which became a realistic prospect several years ago and will soon be available on the market. Yole expects market entry for MEMS technology within two years with a potential market value reaching $100M in 2022. Miniaturization and better audio quality are driving adoption, in addition to evolution of the existing technologies.

Between the microphone and the microspeaker, codecs, DSPs and amplifier audio ICs play a key role. This is where there is a huge battle in the smartphone and wearable industries to get access to functions. Audio IC suppliers and audio processing unit providers are hunting the best added value. Audio IC suppliers like Cirrus Logic, Realtek and Maxim Integrated are bringing added value through discrete components and highly valuable algorithms. Audio processing unit (APU) providers like Qualcomm, HiSilicon and Apple are trying to absorb this value by integrating audio ICs in the design of their application processor. Drawbacks and advantages of both solutions can be discussed but the future of audio ICs is currently undergoing deep changes. Yole estimates that the audio IC market will be worth more than $4.3B in 2016, reaching $6B by 2022.

This report describes the applications, technologies, and players associated with the microphone, microspeaker and audio IC market’s impending changes 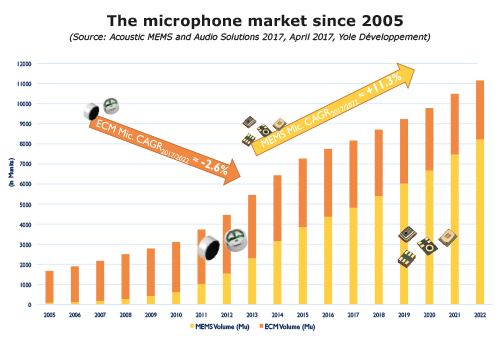 A MARKET TARGETED BY GIANTS

Since the early 2000s the microphone MEMS die market has been dominated by two giants. Infineon and Sony supplied more than 4 billion die chips last year to the top three MEMS microphone suppliers: Knowles, Goertek and AAC. This represents more than 70% of the market. This ranking has been established for a few years, but the market shares have been shifting quite rapidly. Knowles has been the undisputed leader since 2003, but is now challenged by its Chinese competitors Goertek and AAC, who are particularly aggressive on price and delivering products with improving performance. Newcomers like VesperMEMS are on track to take share in this market thanks to performance that is well suited for growing markets like wearables and mobile. At the other end of the audio chain, the microspeaker market is quite fragmented. There are lots of players, coming mainly from Asia, with several companies being both involved in microphone and speakers like AAC, Knowles, Goertek and others. New applications like wearables, hearables and portable sound systems are opportunities for new entrants like Audiopixel and USound to introduce their MEMS technologies and disrupt a market looking desperately for innovation. The audio IC company landscape is also experiencing profound changes. This includes M&A and deeper involvement of system makers, especially in consumer electronics, which brings players like Apple, and giants like Qualcomm and HiSilicon to integrate the added value into their devices, which squeezes the specialized IC makers.

This report provides a detailed vision of the player landscape, as well as an analysis of the value flow through the audio chain, which companies can win and the evolution of the total audio landscape that we can expect for the next five years 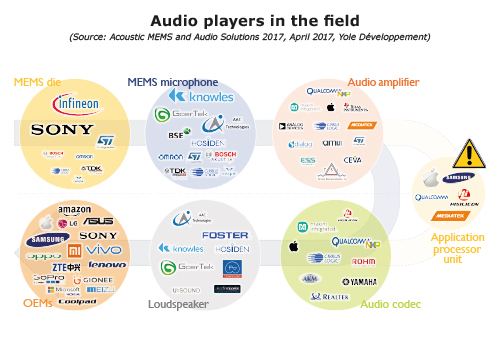