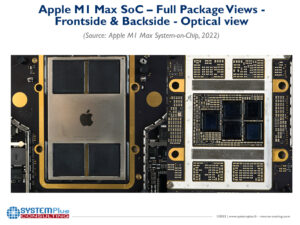 While x86 architecture is still expected to account for most PC processing, Apple’s switch to in-house processor silicon signals a major shift in this structure. Yole’s market analysis expects 14% of PCs to run on non-x86 processors by 2027, up from just 4% in 2020. Apple’s strategy with the M1 family and its derivatives is the main factor in this market shift, as Apple shows what is possible at the high-end of PC performance.

This full reverse costing study was conducted to provide insight on the technology data, manufacturing cost, and selling price of the Apple M1 Max System-on-Chip (SoC).

In 2020, Apple published the M1 SoC to run its macOS on a proprietary design. The birth of Apple’s first processor for personal computing created a shockwave in the industry. Apple became totally independent in processor development, leaving many to speculate whether the end of Apple sockets for Intel processors had arrived. The following year, Apple presented M1 Pro and Max SoC as the next generation of M1. Once again, Apple showed its ambition and capability with these two powerful SoCs. The M1 Pro’s die is twice the size of the M1’s die, and the M1 Max die is almost four times bigger.

According to Apple, the biggest and most powerful chip for Pro Notebook – M1 Max SoC – includes 57 billion transistors, which is 70% more than M1 Pro and 3.5 times more than M1. Regarding chip architecture, the M1 Max is equipped with a 10-core CPU, a 32-core GPU, a 16-core neural engine, and an Apple-designed media engine that boosts video processing while maximizing battery life. The chip is fabricated by TSMC on 5nm process, which is also used to manufacture Apple’s A14, A15 SoC, and the other M1 variants.

To reveal all the details of the Apple M1 Max SoC, this report features multiple analyses. These include a front-end construction analysis to reveal the most interesting features of the TSMC 5nm process, as well as package assembly and structure. In addition to a complete construction analysis using SEM cross-sections, material analyses, and delayering, we show high-resolution TEM cross-section images of TSMC’s 5nm features. A CT-scan (3D X-ray) is also provided to reveal the layout structure of the whole chip package. Moreover, the floorplan of the SoC die is included to give a clear view of IP blocks and general chip architecture. Lastly, this report contains a complete cost analysis and a selling price estimation of Apple’s M1 Max SoC. 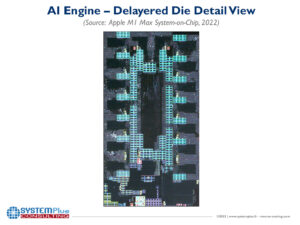 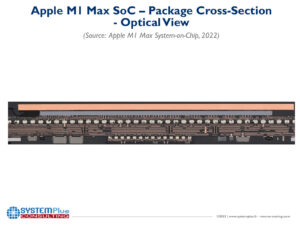