This monitor is not part of our Bundled Offer and Full Yole Développement yearly subscription.

The CIS process is an analog version of the CMOS process commonly used for memory. It has become a key segment in the semiconductor industry, being worth $19.3B in 2019 and exceeding 4.6% of total semiconductor sales. This segment
has seen Sony become a significant semiconductor player, alongside other CIS companies such as Samsung, OmniVision, STMicroelectronics and ON Semiconductor. Innovative approaches like wafer stacking technologies have emerged specifically for CIS, and have become key developments for the semiconductor market in general. In the context of fierce rivalry, imaging has become the
focal point of smartphone makers and the entire semiconductor supply chain.

Beginning in 2019, Yole Développement began publishing, in quarterly instalments, a monitor containing world-class research, data, and insights pertaining to the imaging markets. This monitor analyses the CIS markets’ evolution in terms of revenue, shipments, capital expenditure (capex),
and near-term price evolution, as well as demand per market segment and CIS technology evolution. Near InfraRed (NIR) sensing is also included in this quarterly imaging market monitor, as well as detailed profiles of main suppliers are also provided. In the future, Yole Développement will extend its imaging coverage to key components of the CMOS Camera Module (CCM) market. 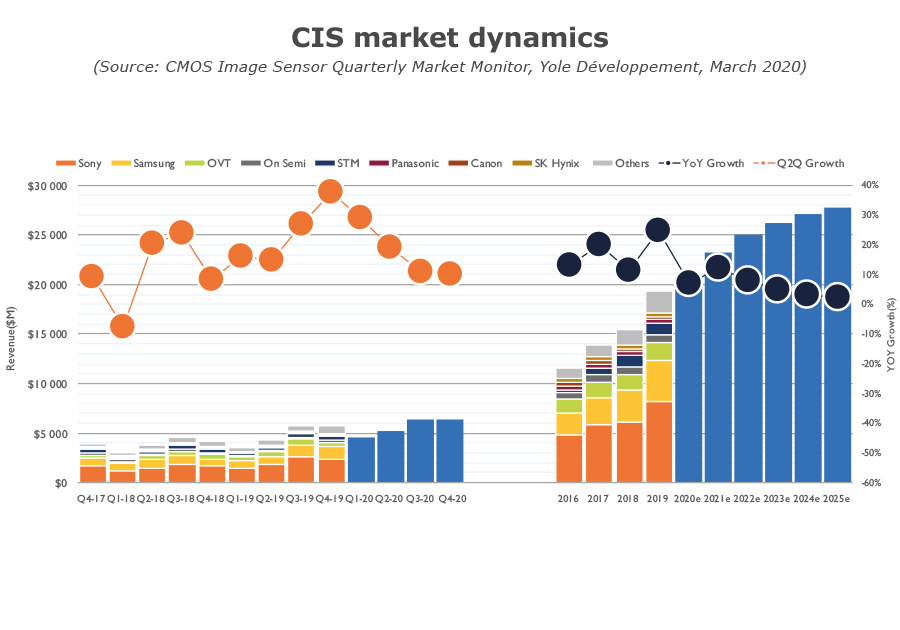 It all started in 2007, smartphones began completely disrupting the imaging market and its corresponding technology. Just five years later, the production peak for digital still-cameras was reached, and phones became the primary imaging device for consumers. New use-cases
linked to social media began fuelling the need for high-quality rear, world-facing, cameras for photography, quickly followed by front selfie cameras for videos and top-grade photography.
2015-2017 saw additional cameras attached, either to extend the zoom capability on the rear or to provide 3D biometric interaction on the front. In 2019, 3D rear cameras improved
the photographic experience and made inroads into augmented reality (AR) applications.

In 2019, the overall attachment rate for CIS cameras moved towards an average of 3.1 units per phone. The growth rate for CIS attachment rose to 25% year-over-year. At the
start of 2020 the CIS industry was overheating, with a combination of high demand and high prices due to capacity limitations. Yole Développement’s quarterly monitor will answer the pressing questions facing this industry, including:

With its CIS Quarterly Market Monitor, Yole Développement provides opinions and answers to all of these questions on a quarterly basis, including sensing. Yole’s CMOS Image Sensor Quarterly Market Monitor will be published at the
beginning of March (Q1), June (Q2), September (Q3) and December (Q4). And it will give you a closer look at the main CIS markets and players. 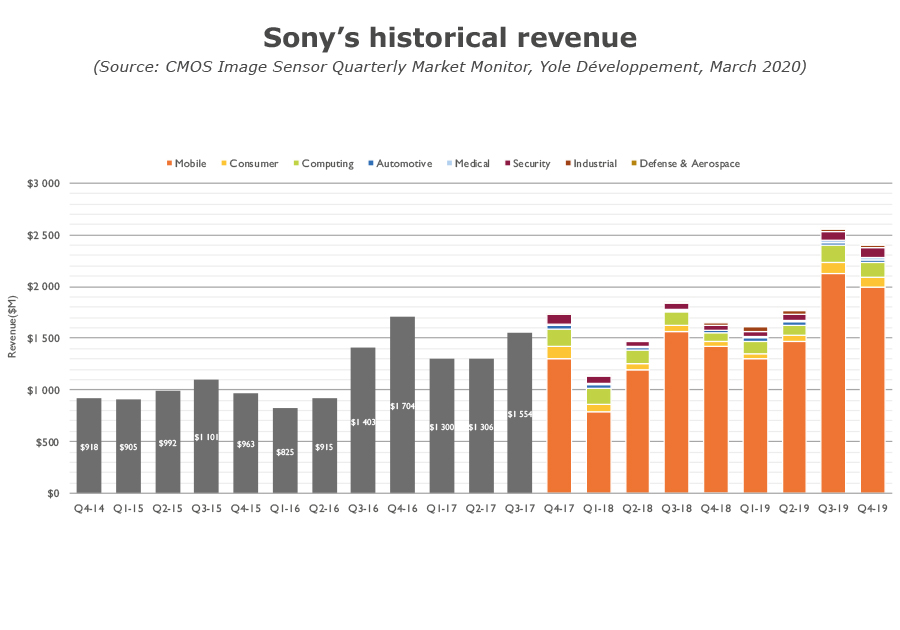 WHAT DO THE UPCOMING QUARTERS HOLD?

The short-term forecast will be impacted by the COVID-19 outbreak. One thing is certain, we now have one or two quarters of cooling down of the overheating of the CIS industry. The outbreak of COVID-19 stopped the supply chain for a month in February in China. It seems slowly to be returning to normal, and Yole’s analysts expect it will take the rest of the year to be fully operational. 2020 will probably look somewhat similar to 2019, and the end of the year will again put the industry under high production strain in order to compensate for the early losses. What we cannot predict is the possibility of a systemic recession. People will still
buy smartphones and smart speakers in 2021, so the risk is more from the financial sector than the biological threat itself.

The overall aim of Yole’s Quarterly Market Monitor is to stick to the reality of the market in order to react accordingly. The CIS industry has entered a period of volatility, pushed toward fire and ice at the same time. Yole remains confident about
the medium term forecast, and we expect the industry to reach US$28 billion in 2025. Growth will eventually slow due to diminishing returns related to additional cameras in mobiles, but saturation of the market is not imminent. 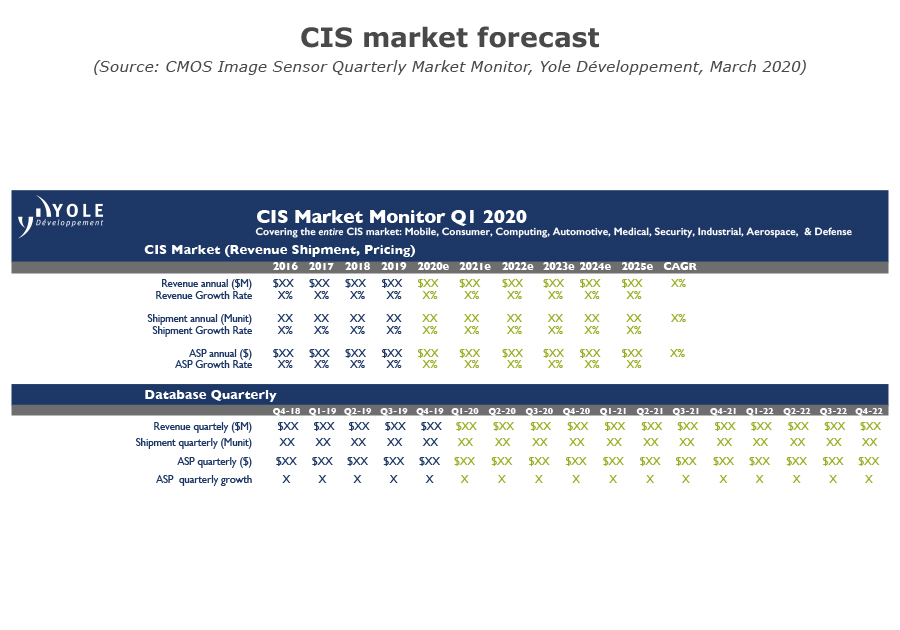 The CIS Quarterly Market Monitor contains all of the data related to CIS revenue per quarter. These include: CIS shipments, near and long-term revenue, market share per quarter, capex per company, and market demand/supply
forecasts. It includes a complete analysis and details of the demand side, with a deep dive into mobile, consumer, computing, automotive, medical, security, industrial, and defense and aerospace. For the top players, including Sony, Samsung, Omnivision, On Semiconductor, STMicroelectronics, Panasonic, Canon, SK Hynix, and others, the CIS Quarterly Market Monitor furnishes a detailed analysis of capex, shipments, and wafer production per technology including process mix, along with the expected impact of CIS technology changes. The following deliverables are included:

WHAT ABOUT THE IMAGING RESEARCH?