Over the last five years, the promising and highly dynamic consumer biometric sensor market has been totally reshaped

Characterization and analysis of the fingerprint, facial, iris, and voice biometric landscape for the consumer market:

Analysis and description of the sensor technologies involved:

Focus on truedepth camera and its competition 96

The “first wave” of biometric technology came five years ago, bringing fingerprint authentication (among other things) to the mass market. Apple introduced TouchID capacitive technology for the iPhone 5S, pushing Android players to embrace the biometric sensing market. This massive upturn in interest fueled the fingerprint sensing market up to $3.5B in value by the end of 2017.

As anticipated by Yole Développement (Yole) in mid-2016, biometry’s “second wave” began with the introduction of the iPhone X in September 2017, when Apple set the standard for technological advancement (and use-cases) for 3D sensing in consumer. Apple conceived a complex assembly of camera modules and VCSEL light sources using structured light principles, along with an innovative NIR global shutter image sensor from STMicroelectronics to perform secure 3D facial recognition. This second wave, led by biometry with 3D sensing, is ongoing and will increase market value toward $17B by 2022.

But biometry is not only a matter of fingerprint or face detection but also iris and voice recognition, regarding the overall breakdown of biometry recognition, Yole estimates that the proportion of each type of detection will be quite unbalanced in the future, with 60% of biometric module in volume coming from face recognition module, while fingerprint (40%) will see a decrease over time of its value due to competition and alternative implementation leading to cost reduction. 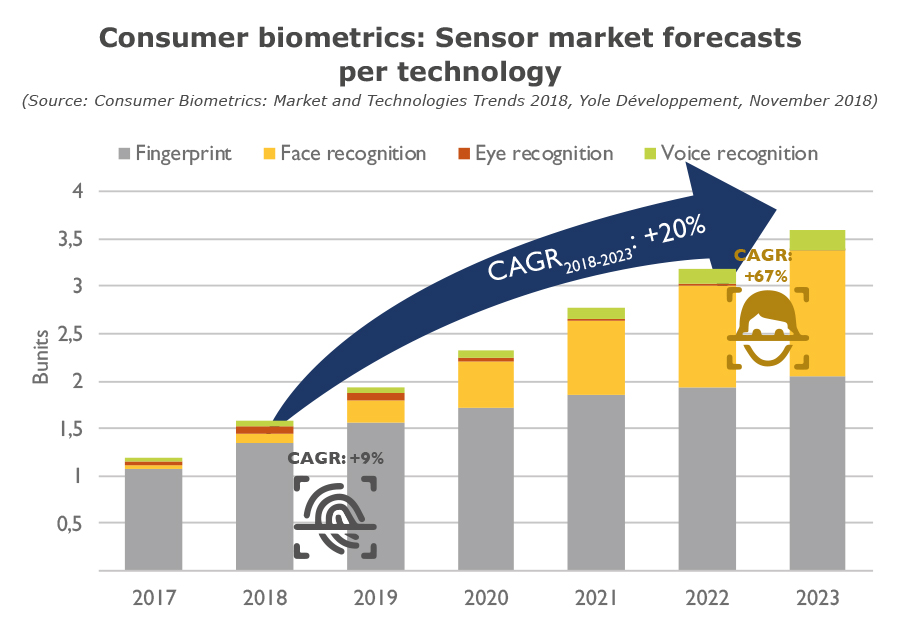 In mid-2016, Apple decided for “structured light approach” as a strategic choice: a complex supply chain with low yield that would achieve integration of the TrueDepth camera, which at the time only Apple could afford such complexity and cost. This fit with
the company’s “it just works” philosophy, and there was no compromise on fingerprint integration, biometric security, etc. Ultimately, Apple raised the bar so high that it would take Android players more than a full year before they could access the same technology at an affordable price.

For 35 years it has been in Apple’s DNA to innovate on the human-to-machine interface (HMI) side of computing. This is why it’s not surprising that Apple brought to market the most advanced biometric solutions, combined with nice-to-have features like animojis targeting the social media culture.

Because they lacked Apple’s in-house capabilities, most Android firms opted against 3D sensing and instead chose to integrate lower-cost fingerprint technology that achieves phone unlock and online payment functions similar to Apple’s (albeit with a somewhat compromised user experience), along with 2D facial recognition integrated with the front camera module.

Interestingly, we now see Chinese players closing in fast behind Apple, thanks in large part to a fruitful partnership across their supply chain. In fact, these players have engineered a 3D sensing solution comparable to Apple’s, and within only one year: i.e. Huawei’s Mate Pro 20 and Xiaomi’s MI8, both of which incorporate an embedded structured-light module for 3D sensing and biometric features.

In fact, the proliferation of biometric modules across other consumer devices will trigger huge gains for the biometric hardware market over the next five years. 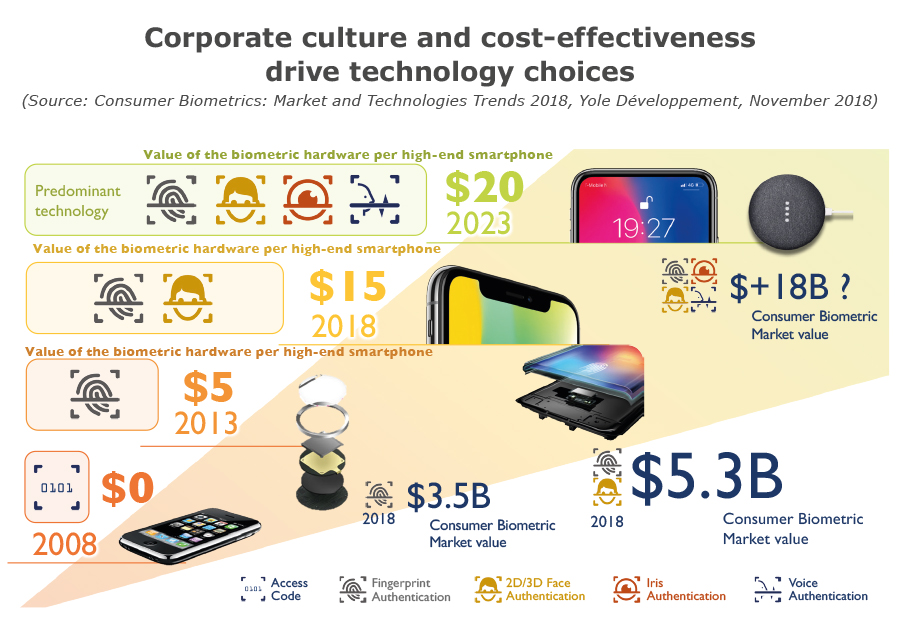 HARDWARE IS NOTHING WITHOUT SOFTWARE

In this report, Yole highlights the evolution of each biometric sensing solution. For facial recognition, moving from a structured-light approach towards a time-of-flight (ToF) approach is expected. ToF is more compact and less expensive, though improvements
are needed for power consumption and artefact correction. On the fingerprint side (and as described in Yole’s previous report on fingerprint technologies), fingerprint sensor-makers will adopt different integration schemes over the next three years: from coated-button to under-display integration that will co-exist with the button and under-material integration, depending on the smartphone brand.

Long-term, the fingerprint market could be threatened in two ways. First, competition with other, more convenient biometric solutions like facial recognition (thanks to its software and AI boost), and secondly by in-display integration where the detection function is embedded in a layer of the display module, with transparent large-area photodetectors.

Another big deal in the biometric market is smart speakers/assistants. Currently, biometric features are very limited for these systems, but the eventual demand (for consumer and security reasons) will push OEMs (Original Equipment Manufacturers) to achieve voice recognition in order to perform customized actions, depending on the profile. Thus, the need for new hardware (directive microphone, beamforming, high SNR (Signal to Noise Ratio)), along with strong AI (Artificial Intelligence) and efficient power computing on the edge, will drive this segment of the biometric market. 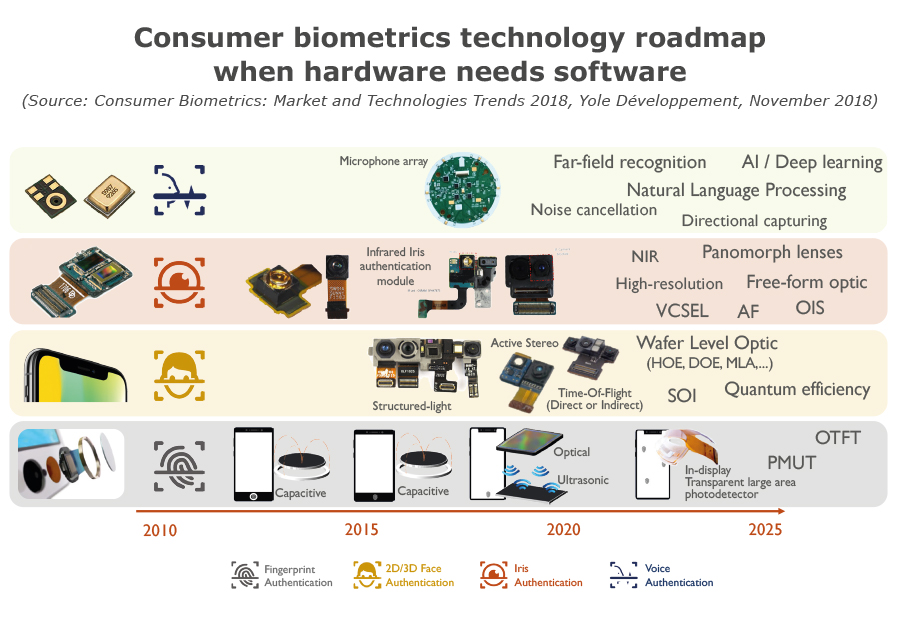