CRISPR-based products in biotech, agritech and diagnostics markets will reach $5B in 2023 before extra growth comes from therapeutic applications

CRISPR IS ENTERING THE COMMERCIALIZATION PHASE

Recent advances in genome engineering are starting a revolution in biological and translational applications. CRISPR-Cas9 and its variants enable diverse manipulations of genome function. This genome editing principle spans almost every industry that involves biological systems including: biotech, agritech, therapeutics and diagnostics.

In this context, Yole Développement’s report analyzes how the $546M CRISPR market in 2017 will grow at a rate of 44% year-over-year, reaching $5B by 2023. This growth will be driven by the rising adoption of CRISPR technology in the area of biotechnology to predict models for drug discovery and create innovation tools in agritech. Diagnostics and therapeutics represent a small market contribution to this growth since the technology is in its infancy and requires a number of iterations to optimize its efficacy, safety, and specificity. CRISPR-based gene editing provides the ultimate toolbox for genetic manipulation, allowing the appearance of different products and many new applications that are now being investigated and established.

The biotech market encompasses a wide range of products which consist of CRISPR-Cas9 kits, providing the required endonucleases and reagents for gene editing. The other products result from the use of CRISPR technology as a tool to engineer cells or animals and generate a genetically modified cell line and animal disease models. The Global Biotech CRISPR market is anticipated to grow at a 39% Compound Annual Growth Rate (CAGR) between 2017 and 2023 to reach $3.9B. The major factors boosting the CRISPR technology market in biotech is the great need for optimized CRISPR-CAS9 with reduced off-target effects in addition to the biological research based on the use of engineered cells and animals for preclinical studies. The key players are mainly large biotech companies such as Thermo Fisher, IDT, and Horizon Discovery, who have the largest market shares. There are also an increasing number of startups like Aldevron, Synthego, GenScript, and New England Labs who are trying to get part of the pie.

Agritech, therapeutics and diagnostics are additional applications that are still in the development stage but hold promising potential to contribute in the overall growth of the CRISPR market. The agritech industry is producing more food than ever before, but as the world’s population rapidly approaches eight billion, modern food production methods will need a radical transformation, making a key driver for CRISPR adoption. However in Europe regulatory issues are slowing the market’s growth.

For therapeutic and diagnostic applications, no company has an approved product on the market yet. Moreover most of the key players in these markets are small start-ups and technology companies like Casebia Therapeutics, CRISPR Therapeutics, Editas Medicine and Intellia. Despite the clinical challenges in therapeutic applications including off-target effects and long delays for clinical trials, CRISPR is one of the latest technologies with therapeutic potential that could make disruptive changes in the future. The diagnostic field is still at a research stage and lots of developments are needed before a CRISPR-based diagnostic test is available for real-world use. Today there are only a few key players working on diagnostic applications based on CRISPR including Mammoth Biosciences, Caribou Biosciences, and MIT. In this report Yole Développement’s analysts identify significant trends driving the CRISPR market’s growth, challenges and analyze competitive developments. 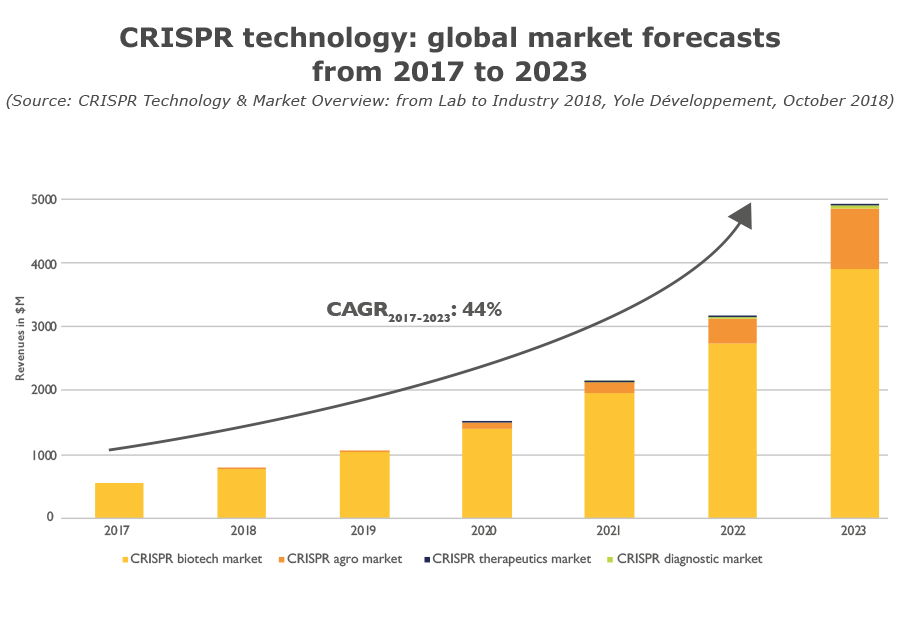 The CRISPR market for biotech is currently dominated by Thermo Fisher, which holds 38% of the market for CRISPR-based kits and reagents and 61% of the CRISPR-based engineered cell market in 2017. The company is working with all the major pharmaceutical companies involved in developing new therapies based on gene editing. CRISPR kits and reagents represent the largest market for biotech applications, worth $266M in 2017. CRISPR-engineered cell lines represent the second largest market and estimated to be worth $187M in 2017.

Two business models are dominant currently in the CRISPR for biotech market: Selling direct CRISPR-Cas9 products, specifically kits and reagents, engineered cell lines and modified animals; and offering testing services. Most of the small biotech companies are focusing on one business model and developing only one or two products. For example CRISPR-Cas9 kits are offered by Aldevron, Genewiz, Novozymes, Inscripta and Synthego. Engineered cell lines come from Cellectis, Cellecta, Genewiz, Transposagen, Genoway and Synthego. Genetically modified animals are available from Genoway and Biocytogene.

In terms of services, some of the biotech companies are carrying out tests including CRISPR design and conception, delivery validation and functional validation on cell cultures. Indeed, these biotech service companies may have more expertise than the end-users, which helps get input rapidly. Horizon Discovery is growing very fast and already has large-scale capacity of kit production and CRISPR services. The company holds 43% of the CRISPR-Cas9 service market and may continue to dominate following the acquisition of Dharmacon. Taconic Biosciences, Charles River, Genoway and the Jackson Laboratory are the key players involved in engineering animal disease models for research and preclinical trials. This report analyzes the different business models adopted by biotech companies and identify the strategic opportunities in the market for stakeholders by identifying the high growth segments. 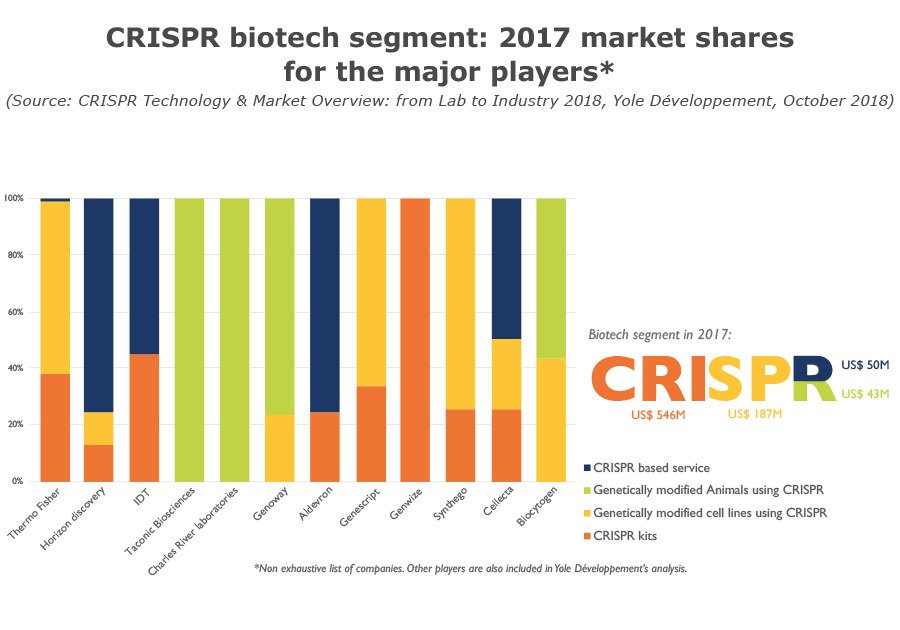 CRISPR genome-editing technology offers the promise of replacing less efficient and costlier procedures. Two therapeutic paths are proposed to treat a number of cancer and genetic diseases using CRISPR; one strategy is to genetically correct patient cells ex-vivo for autologous transplant, whereas another is to modify cells in-vivo by delivering CRISPR effectors to the targeted organ. Patent landscape analysis for CRISPR technology showed a high number of patents in the field of CRISPR, with more than 2870 patent families comprising >8500 patents documents over the past 13 years. In this report we identified a big increase in patent applications from companies like Regeneron, Novartis and Cellectis since the publication of key patents by Emmanuelle Charpentier and Zhang Feng.

CRISPR has only been around for a few years, but its use has already exploded in terms of fundraising opportunities. Investors do not hesitate to put money into CRISPR technology for therapeutics, CRISPR Therapeutics company, set up by Charpentier, has raised $89M plus $105M through a deal with Vertex. Editas Medicine has brought in more than $160M. Juno Therapeutics has raised more than $500M to support its research in CRISPR for immune system applications. There have been several collaborations between the key patent holders and pharmaceutical industry companies. Bayer spent $300M in a joint venture with CRISPR Therapeutics to create Casebia Therapeutics, working on the development of new drugs for blood disorders, blindness, and congenital heart disease. Vertex Pharmaceuticals and CRISPR Therapeutics inked an agreement that could be valued at $2.6B. Other collaborations have been established between Caribou Biosciences and Novartis, Intellia and Regeneron and the University of California, Berkeley and ERS Genomics.

The technology is still relatively new, however, the real economic potential of CRISPR lies in human therapeutics. The fact that the total fundraising for therapeutics using CRISPR is already valued at a potential $3.9B tells you something about the overall size that this could reach in the future. This report includes an intellectual property landscape analysis of the main patent assignees by applications. 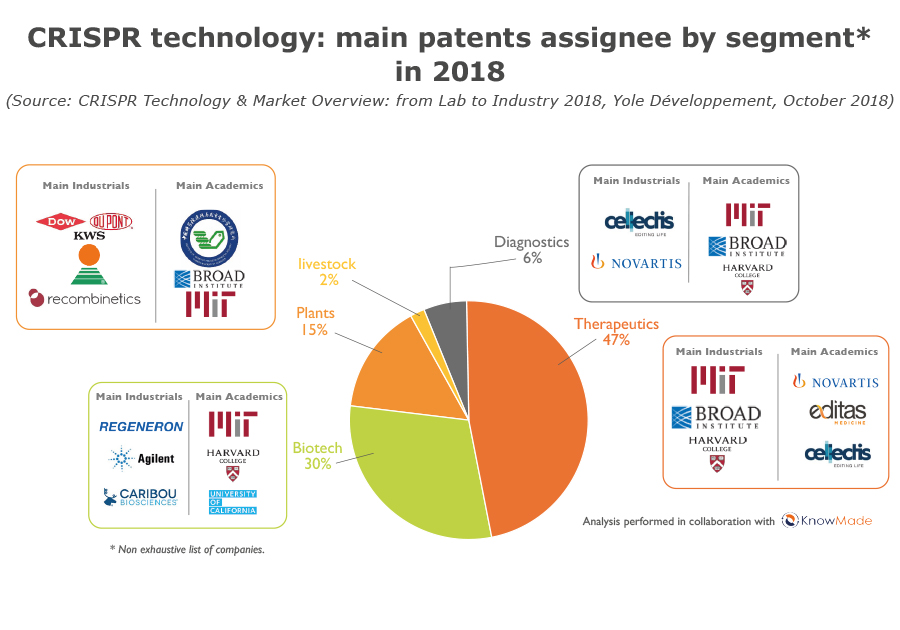