The market for epitaxy equipment, such as MOCVD, HTCVD, and MBE, crucial in Power and Optoelectronic applications, is expected to reach around $1.1B in 2026.

Companies cited in this report 15

We are at a crucial period of history where each device around us is becoming smarter, greener, and more compact. Even the excruciating COVID situation has had nothing more than a positive impact on the semiconductor industry by only further accelerating technological innovation. In such an innovation race to add more functionalities into our everyday devices using the More-than-Moore (MtM) approach, the Power-Performance-Area-Cost (PPAC) factor is improved not only by scaling but also by using non-Si materials and by heterogeneously integrating them to one another. In this regard, Si, along with non-classical substrates such as GaAs, GaN, SiC, and InP, is growing at significant Compound Annual Growth Rates (CAGRs). However, the choice of these materials comes with stringent material quality requirements and hence necessitates ultrapure thin films grown using epitaxy equipment. As of 2020, epitaxy equipment sales for More-than-Moore applications amounted to around $692M and are expected to grow to $1.1B by 2026, with a CAGR2020-2026 of 8%. However, these figures do not do justice to the vitality and omnipresence of the epitaxy step in missioncritical applications in market segments such as automotive (EV/HEV), consumer (smartphone, smartwatch, AR/VR), and aerospace & defense. It is further intriguing to realize that these complex epitaxy equipment systems used in HVM are supplied by only very few players, including some not very well known in the mainstream front-end market.

From a technical standpoint, MOCVD covers most of the III-V epitaxy while High-Temperature CVD (HTCVD) is the mainstream deposition technique for Si- and SiC- devices. Historically, MOCVD is required for commodity devices such as GaN-based traditional LEDs. However, an increasing number of upmarket applications, such as fast chargers, MicroLED displays, and VCSELs for 3D sensing, will drive demand in the years to come. For HTCVD, the primary market remains the power applications, which are based on Si and SiC epi-material and are mainly deployed in market segments such as automotive and industrial. As a third technique, MBE is already used in low-volume, high-performance demanding applications as a potential competitive solution to MOCVD. While MOCVD and HTCVD combined represented around $650M in revenue in 2020, MBE remained limited with an estimated revenue of only slightly more than $40M. This is because MBE users are concentrating mainly on pilot-line and R&D applications and in only a small way to volume production of RF and VCSEL devices. Accounting for all these three equipment types, demand from a wide range of applications translates directly to growth of different sets of epi-materials. SiC, in particular, is experiencing a lot of demand in China. 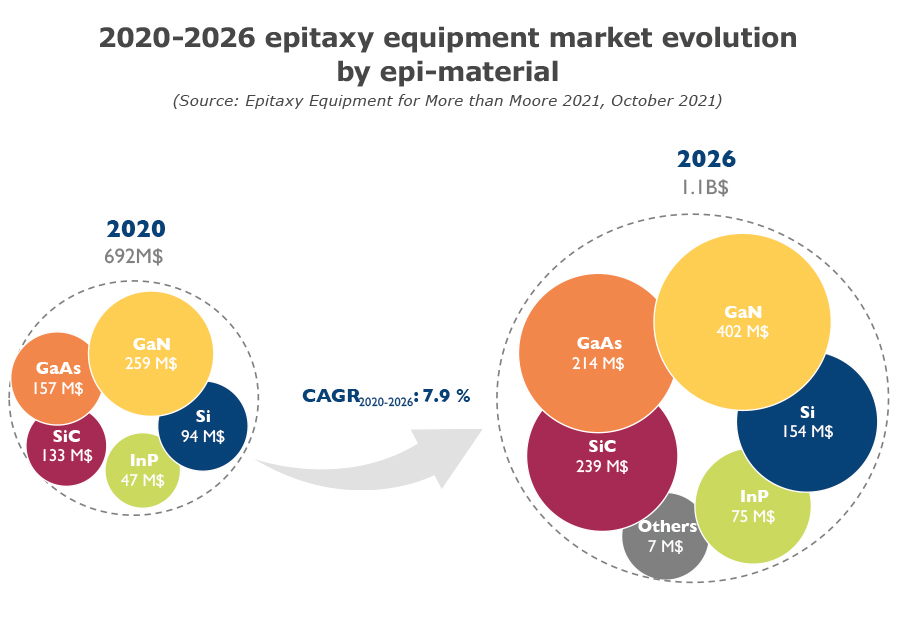 Having said that, we believe that in many cases, the investments in 2020 and 2021 for this equipment are rather strategic than the actual market demand. The equipment market is estimated to jump by 15% in 2021, and we believe the momentum will continue into 2022. To explain this jump, we must consider the various macro-economic factors that have accelerated the technological transition at the device level. For example, the penetration of GaN and SiC is happening at lightning speed into the automotive and consumer market segments. In general, the transition to non-Si wafers and the transition to higher wafer diameters for these materials are also occurring faster than previously anticipated. 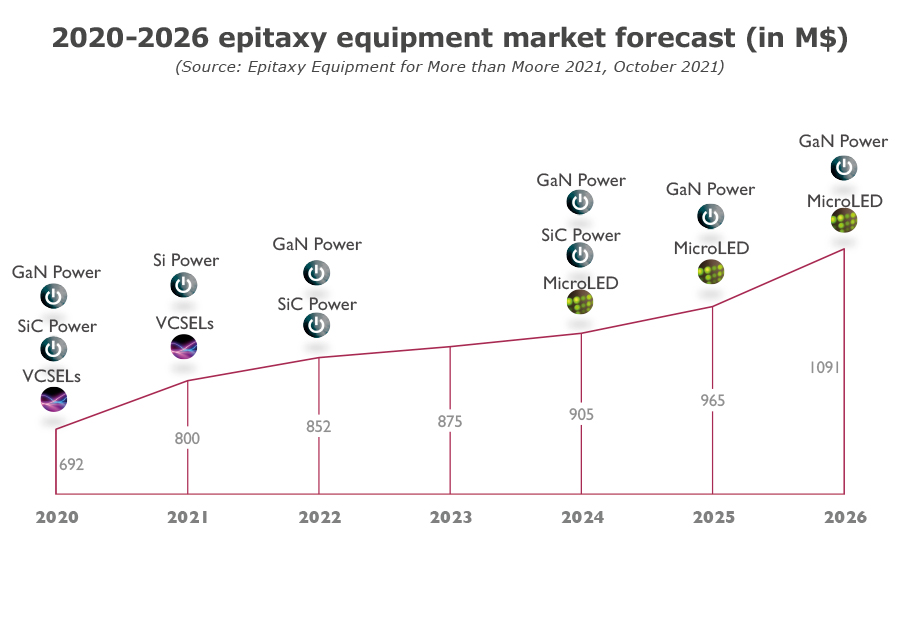 This high demand for equipment is satisfied by very few equipment vendors. In total, we have identified 11 major epitaxy equipment vendors in the MtM space, and the top three (Aixtron from Germany, Veeco from the US, and AMEC from China) dominated in 2020 with more than 60% of the market share by revenue. However, this market is also occupied by various other frontend equipment giants (such as AMAT, TEL, ASM International, Naura), domain-specific players (such as Taiyo Nippon Sanso, NuFlare, LPE), and some unidentified start-ups from China. The dominance by the top three players in 2020 was not a big surprise as it has remained the case at least since 2018. However, if we look at the top-2 players, between 2018 and 2020, Aixtron increased its market share by 10%, while Veeco has seen its market share fall by 15%. One of the many reasons for this is the US-China trade tension, which has chosen the semiconductor industry as one of their battlegrounds. This battle is even more pronounced in the epitaxy equipment space as the demand is primarily driven by China. As a result, 2020 resulted in one of the best sales years in China for Aixtron, with approximately 57% of their revenue coming from the region, in contrast to Veeco’s mere 13% revenue. Naturally, Aixtron continues to be the leader in the overall epitaxy equipment market, with Veeco retaining its second spot (thanks to its improved MBE revenue in 2020). AMEC follows closely in third place with a good volume of equipment shipped for LED devices. With the geopolitical situation evolving and the supply chain ever more fragile, we expect the competition between equipment vendors to intensify in the coming years. 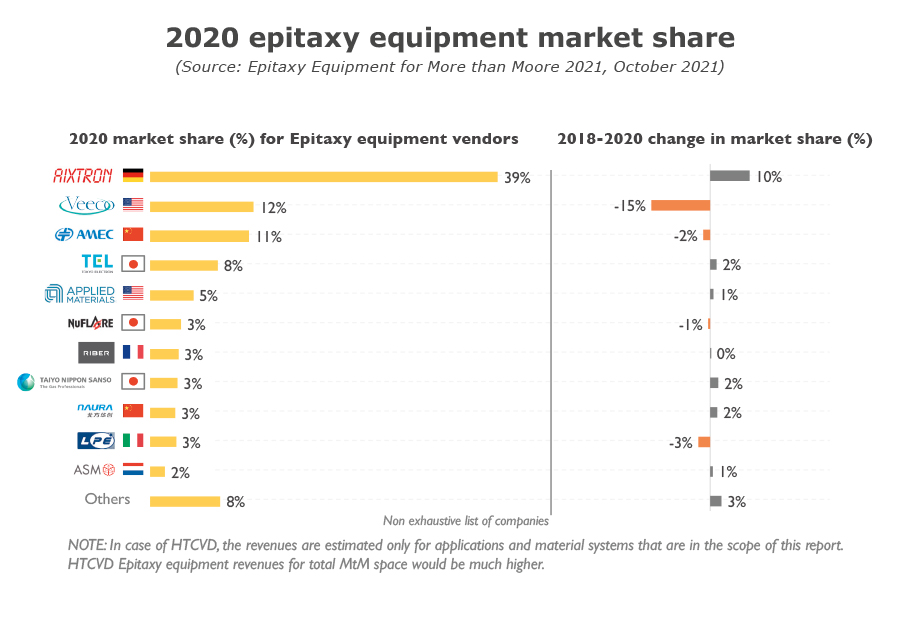