Driven by microLED displays and power devices, epitaxy equipment shipment volumes will multiply more than threefold over the next five years.

Objectives of the report 0

Epitaxial growth is used today for siliconbased devices as well as in the III-V compound semiconductor industry. It is a key technology to grow high-quality material for device circuits. Epitaxy-ready wafer demand exceeded the equivalent of 7.8M 6-inch wafers in 2019, driven by LEDs as well as power devices. This demand is expected to increase and peak at the equivalent of almost 21.3M 6-inch wafers by 2025, strongly driven by microLEDs, power devices and laser diode applications.

In terms of semiconductor substrate, GaN material represents the major epitaxy market after silicon substrates, mostly driven by the traditional LED GaN-devices. However, the overall visible LED industry is currently diversifying its activities to towards more specialized UV and IR LEDs based on GaAs substrates. Additionally, LED manufacturers are developing new types of LEDs to continue creating value in the consumer displays, such as miniLEDs and microLEDs. Apple is starting this with adoption in its higher-end 2021 smartwatch model. In the best case scenario, microLEDs could also spread into smartphone products, which will definitely reshape the epiready wafer market.

On the other hand, wide band gap materials like SiC substrates have found opportunities in the power electronics market. Despite the high market price of SiC, such substrates are a strong asset for high-voltage applications, and thus are considered as a technology choice for some MOSFET and diode products.

Looking ahead, photonics products like laser diode
(VCSELs) operating in the infrared spectrum and typically processed on GaAs, are making serious inroads into the epitaxy growth market. In addition, GaAs is especially advantageous for radio frequency products such as small-cell implementation, for both sub-6Ghz and the first mmWave small cells in the 28GHz-39GHz range. Thereby, with the cellphone transition from 4G to 5G, we expect GaAs to remain the mainstream technology for sub-6GHz instead of CMOS. Choosing the right substrate technology will strongly depend on the technical performance associated with device requirements, as well as the cost.

This report offers a comprehensive overview of epitaxial semiconductor substrates used in More than Moore (MtM) applications. Moreover, a detailed analysis of the wafer forecast, split by wafer size and substrate type, has been calculated for the 2019-2025 timeframe. 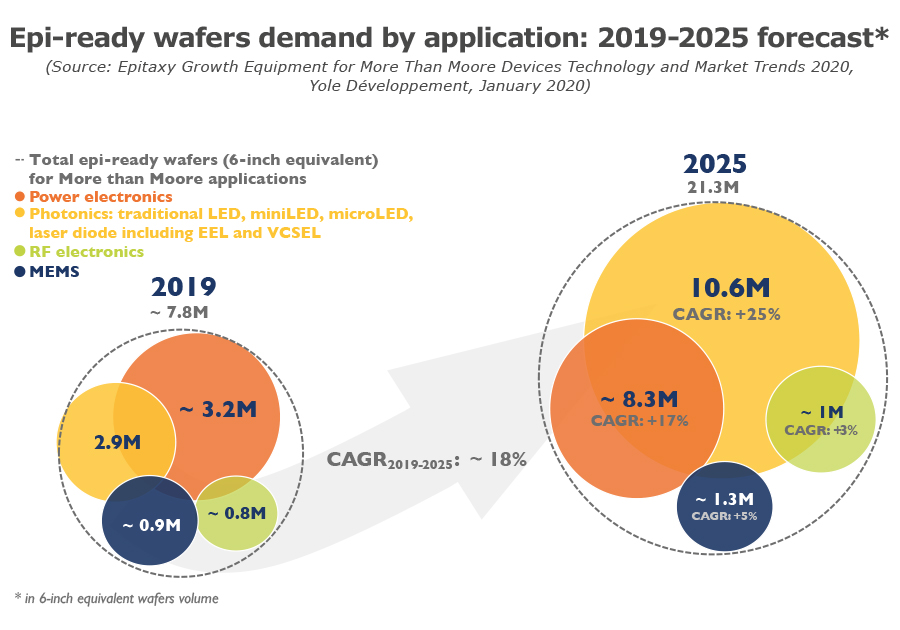 THE EPITAXY EQUIPMENT MARKET WILL BLOW UP OVER THE NEXT FIVE YEARS, DETONATED BY VCSEL AND DISRUPTIVE LED DEVICES

The epitaxy growth equipment market for MtM devices was worth close to $940M in 2019, including silicon and non-silicon based applications. It is expected to reach more than $6B by 2025 in the aggressive scenario.

From a technical point of view, Metal-Organic Chemical Vapor Deposition (MOCVD) services the majority of the III-V compound semiconductor epitaxy industry, such as GaAs and GaN based devices. High-Temperature (HT) CVD serves the majority of mainstream siliconbased components and SiC devices.

Today’s market is mainly driven by LED and power applications. In fact, massive subsidies in China have led to an excessive LED capacity build-up. The MOCVD market is now in a situation of significant overcapacity for GaN LED production compared to what is actually produced. MOCVD investment is particularly tough to forecast in the next few years and could change year to year. The situation could be reversed if the government decides to strictly prevent the major LED manufacturers from producing more GaN wafers. Therefore, different scenarios have been considered for the traditional LED and microLED markets in this report.

For traditional LED GaN-based devices, the MOCVD investment trends will not follow LED wafer d emand. S pecific u psides a nd d ownsides with respect to LED GaN devices might arise as used to happen in the past. Nevertheless, given recent competitive trends in China, the general lighting and backlighting markets have become commoditized. Hence, epitaxy vendors do not expect significant revenue from these markets going forward. However, requirements for microLED epitaxy in terms of defects and homogeneity are more stringent than traditional LEDs. There are credible roadmaps for improvement in tools and equipment to reach approximately 0.1 defects/cm2 or less based on defects larger than 1μm. Tighter requirements are needed in clean rooms, including for automation and wafer cleaning, compared to traditional LED manufacturing. This is especially true for the smallest dies, below <10μm, which will have smaller killer defects.

By contrast, MEMS industry is a small niche of the overall epitaxy growth equipment market, as their production capacity is very well established.

The MOCVD reactor market could be affected by possible technology transitions to Molecular Beam Epitaxy (MBE) for compound semiconductor-based devices like laser diodes, microLEDs and VCSELs. In fact, MBE could bring greater advantages in terms of yield and uniformity for VCSELs but also for highfrequency 5G RF applications.

In the case of SiC power, MOCVD manufacturers are trying to identify and develop new MOCVD technologies to addresses the SiC market where HT CVD is mostly used.

This report offers a detailed analysis of the epitaxy growth equipment market forecast by volume and value, for the 2019-2025 timeframe, broken down by MtM device application, substrate type as well as by technology. 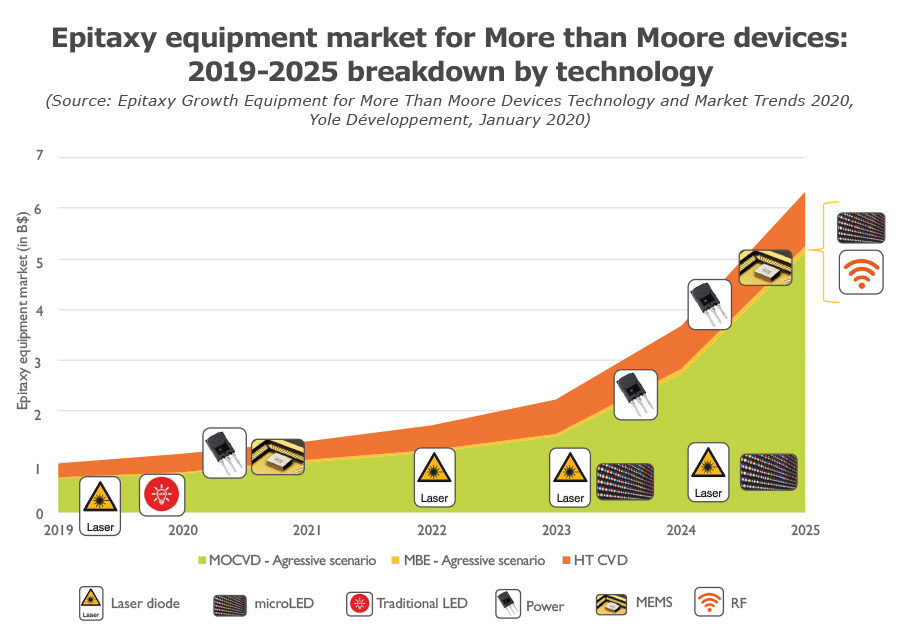 When looking at the competitive landscape, the epitaxy growth equipment market is occupied by a variety of epitaxy equipment makers coming from three different categories:

In 2018, three equipment makers represented almost 60% of the epitaxy growth equipment market. AIXTRON is leading the GaAs market with a strong position in laser diodes as well as LED GaAs based devices. AMEC is very well positioned in the LED GaN business. Considering the complex relationships between China and the United States intellectual property disputes, Veeco has lost market share in China to AMEC. There is a risk that such disruptions will continue with the trade barriers and additional taxes. These challenges might strongly impact Veeco’s share and reduce the competitiveness of Veeco in the Chinese market.

Competitive landscape and major epitaxy equipment suppliers’ market share are quantified and detailed in this report, by semiconductor material type and device type. 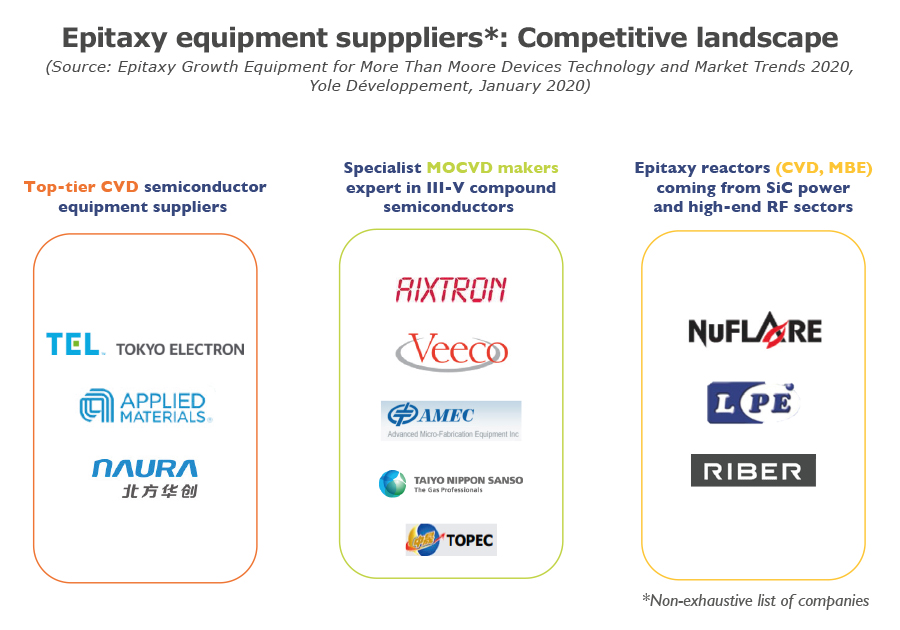