The rapid-changing fingerprint technology market has expanded impressively into the consumer space – now shipment volumes will benefit from an 19% CAGR through to 2022, when the market will be worth $4.7B.

Characterization and analysis of the fingerprint sensor landscape for the consumer market:

Analysis and description of the sensor technologies involved:

Impact on the Sapphire/Glass Industry 169

FROM ALMOST ZERO TO A MULTI-BILLION DOLLAR MARKET IN THREE YEARS!

Apple introduced the iPhone 5s in 2013, after acquiring Authentec a year earlier. Since then, fingerprint sensors have been massively adopted, and the volumes of sensors shipped into the consumer market have grown incredibly. At first, the sensors were a convenience and protection feature for unlocking phones. However, they are now shifting into a security feature for online identification and mobile payment in an increasing number of smartphones.

Fingerprint sensing is becoming a mandatory feature on every smartphone, adding a lot of value. However such an increase in volume is always followed by strong cost pressure, and this is what has happened over the last three years. The average cost of a fingerprint sensor has decreased from around $5 in 2013 to $3 in 2016, and even less for low-end technologies. And the pressure hasn’t gone away. Current technologies have now reached maturity, and are threatened by new technologies, which need lower cost to gain momentum. This is the case for ultrasonic detection, for instance. 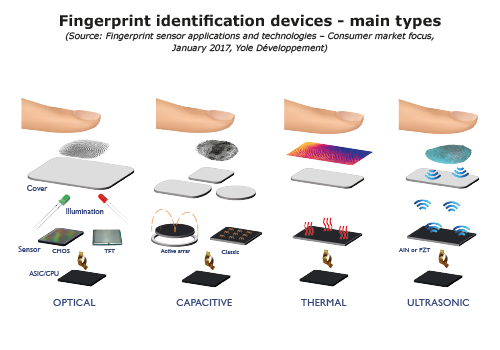 Over the past four years, consumer fingerprint sensor market evolution has been driven by the introduction of the biometry in the smartphone business. Revenues were a few tens of millions of dollars in 2010, mainly from the laptop business. Then, the overall consumer market skyrocketed, shipping 800 million units in 2016, worth $2.9 billion. We now forecast an overall consumer market volume CAGR of 19% from 2016 to 2022.

ONE TECHNOLOGY DOMINATES THE MARKET – BUT CHANGE IS EXPECTED

Since 2013, the main technology has been active capacitive sensing, which provides good performance at a relatively low cost in a button form factor. However, the recent slowdown of the smartphone market is pushing smartphone manufacturers to innovate, focusing on design and use improvements, not performance. By promoting new and very attractive all-glass displays for upcoming flagships, they are pushing fingerprint sensor manufacturers to re-invent their sensors and integration. The integration of the sensor under the glass or other materials limits the sensor performance, which means the choice of the technology is now becoming crucial. 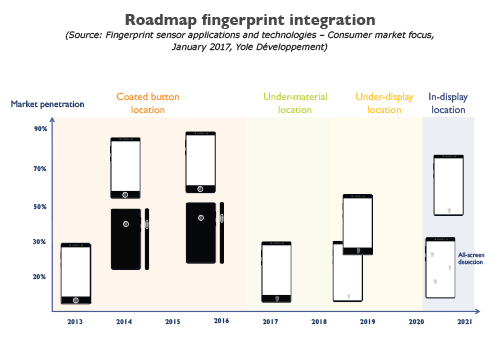 Capacitive technology is evolving to overcome the threat from other technologies. While ultrasonic detection is gaining momentum, its high cost is limiting its expansion. Another technology based on optical detection, with the use of Thin Film Transistors (TFTs), is also emerging. This allows mass production of fingerprint sensors on large panels, reducing the overall production cost.

Because many consumer applications are potentially addressable by fingerprint sensors, they could offer big revenues to suppliers in the near future. All the different technologies will compete and evolve in very different markets, including smartphones, tablets, laptops, the internet of things, and automotive, which are described in this report.

A RAPIDLY-CHANGING PLAYER AND TECHNOLOGY LANDSCAPE

After the LeMax Pro smartphone from LeEco integrating Qualcomm’s Sense ID under-glass metal fingerprint sensor, based on innovative ultrasonic sensing. Then, FPC announcing the first integration of its own under-glass fingerprint solution. Based on capacitive detection, the FPC1268 shows that capacitive technology is not over yet. Synaptics has also announced a partnership with Chinese company Oxi, which owns a TFT-based technology. All those recent releases show that the fingerprint market is both highly dynamic and extremely important to sensor manufacturers. They can potentially bet big, with high return on investments, because the sensors are still high value. Admittedly, after huge growth, the coming years will likely be still profitable, with the total market reaching $4.7 billion by 2022. But a new deal could completely reshape the player landscape, redefine market shares and offer huge opportunities to many players.

The last three years were the first stage in the evolution of the fingerprint sensors. Now, we are at the beginning of the next stage. In fact, it’s a turning point, when technology diversity can enable new uses and better performance. A new world of applications remains to be discovered.

In this report, we will look at the different applications eager to integrate fingerprint sensors. You will also discover the technologies behind the fingerprint sensor market and who the players are. You’ll find out who is involved in this complex and rapid-changing supply chain and who is betting big on the technology. You will also see what the market should look like in five years in terms of volume, value, average selling prices and opportunities.