Analysis and description of the markets and technologies involved:

Objectives and scope of the report 5

Companies cited in this report 8

THE GaAs WAFER AND EPIWAFER MARKET OUTLOOK IS PROMISING

In the past few years, the GaAs wafer market has been dominated by Radio Frequency (RF) applications. But as of 2019, photonics and LEDs represent the main drivers for this market. The total GaAs market will increase from $200M in 2019 to more than $348M by 2025, with a Compound Annual Growth Rate (CAGR) of 10%.

RF is the historical market driver for GaAs wafers. In 2019 it represented 33% of market volume and 37% of market value. RF represents 67% of the GaAs epiwafer open market. GaAs RF demand is mainly driven by handset evolution, with the transition to 5G resulting in greater penetration of GaAs power amplifiers (PAs) for the high-end sub-6GHz phones.

Photonics has a 5% share of wafer volume, corresponding to a $24M market. However, the photonics market will have a double digit CAGR, with GaAs Vertical Cavity Surface Emitting Laser (VCSEL) technology strongly dominating this market. The importance of the photonics applications means that they represent 32% of the GaAs epiwafer open market.

With the transition of LEDs from low-end applications to high-end applications, such as horticulture lighting or automotive, LEDs still represent the highest GaAs wafer market volume with 41% share. Automotive will be the main driver for visible LEDs and infra-red (IR) LEDs, with a dynamic 6% CAGR envisaged from 2019 to 2025.

GaAs will find another source of growth in the display market, driven by hot new applications such as microLEDs. Yole Développement (Yole) analysts forecast the CAGR of the display market to be 19% in the 2019-2025 timeframe.

Given the Covid-19 outbreak at the beginning of 2020, the market outlook is strongly impacted by sales of mobile, consumer and automotive end systems. This report includes three different scenarios and presents the impact of each scenario on the market evolution and production recovery. It conveys Yole’s understanding of GaAs implementation in different market segments. It also includes an overview of different applications, specifically RF, LED, display, photonics, and photovoltaics (PV). Furthermore, Yole shares its view of the wafer and epiwafer market’s current dynamics and future evolution. 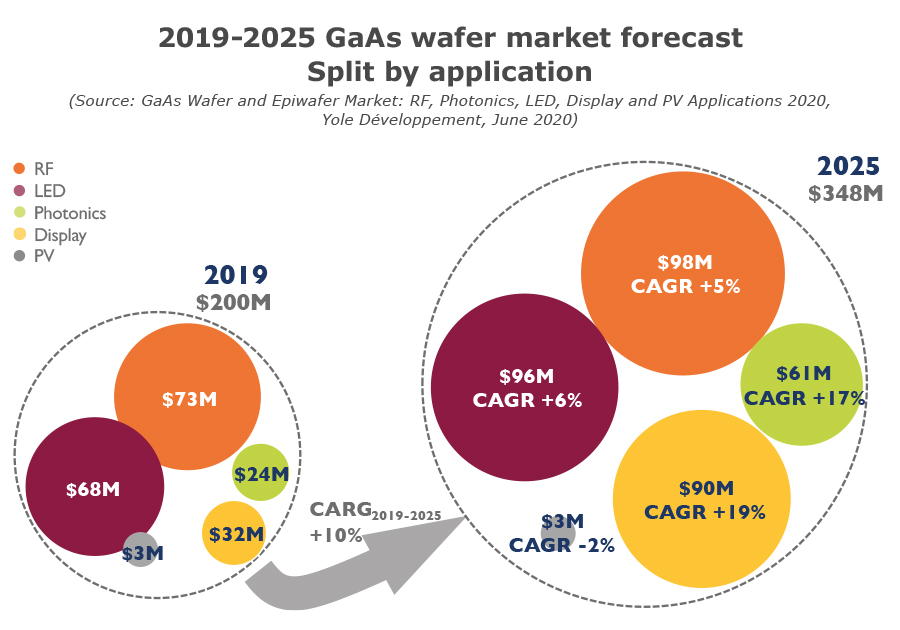 VCSELS AND MICROLEDS WILL DRIVE THE GaAs MARKET

Historically, GaAs photonics was a relatively small market mainly focused on datacom applications. However, since the introduction of a 3D-sensing function in the iPhone X by Apple in 2017 and following the adoption of GaAs VCSELs by Android platforms, the VCSEL market has seen a surge in related GaAs wafer and epiwafer production. Along with 3D sensing, VCSELs and Edge Emitting Lasers (EELs) have great potential to be used in Light Distance and Ranging (LiDAR) technology for automotive applications, where they are both competing for short and mid-range detection. Today, VCSELs have paved the way for the GaAs wafer market to grow significantly by entering big consumer markets such as cellphones and automotive. Yole analysts expect the VCSEL GaAs wafer market to grow at a remarkable CAGR of 18% from 2019 to 2025.

On the other hand, the direct view display market has seen growth driven by applications such as control rooms, corporate and indoor home theatre. In this context, MicroLED microdisplays emerged as a potential technology that can provide high performance, in terms of brightness, form factor, color and contrast. The fast progress in the prototyping of microLEDs
is appealing to many manufacturers. MicroLEDs have the possibility of driving GaAs wafer market growth, with a conservative case of $46M in 2025, and an optimistic case where microLEDs could contribute tenfold more in 2025. In this report, Yole also highlights the challenges of microLED technology mass production for consumer grade products. 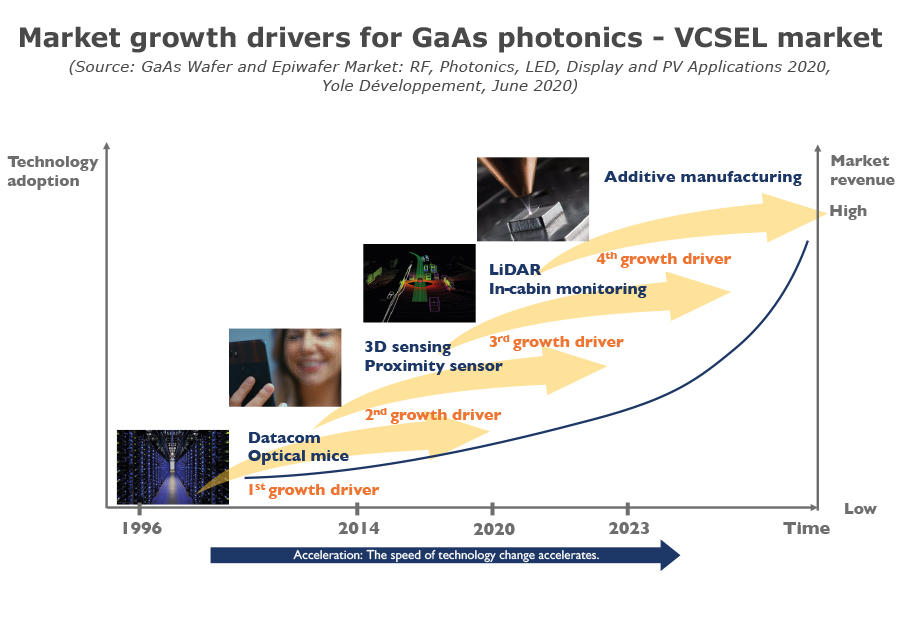 HOW IS THE GaAs WAFER AND EPIWAFER LANDSCAPE EVOLVING?

The GaAs epiwafer supply chain is constantly changing. In the photonics market, the epiwafer business model is application dependent. In datacom, it is mostly integrated, dominated by Finisar, Avago and II-VI. However, for 3D sensing and other VCSELs for smartphones, manufacturers prefer to outsource the epitaxy, a less complicated strategy adopted by Apple, which is supplied by IQE. IQE remains the biggest epiwafer supplier, with 61% photonic epiwafer market share in 2019. But, with increased adoption of 3D sensing, numerous players such as VPEC, II-VI, Sumitomo Chemicals and Landmark are ramping up their production.

The RF GaAs epitaxy market is about 90% outsourced. Previously it was largely dominated by IQE, nevertheless it has lost share to the Chinese-Taiwanese supply chain. As of 2019, IQE and VPEC represent more than 80% of the RF epi market. The LED epiwafer market remains almost entirely integrated within very well established companies like Osram, San’an, Epistar, and Changelight.

In terms of GaAs wafer supply, Freiberger, Sumitomo Electric, AXT and Vital Materials lead the market in 2019. The top players have a bigger market share in high end applications, and due to stringent laser grade wafer specifications, they will keep their advantage for the next 5-8 years. The outlook for new Chinese GaAs suppliers is challenging, they recently entered the market with low-end products for LED. However, their transition to high-end products and expansion out of China is risky due to potential IP infringement issues.

There are interesting questions outstanding. Will some LED suppliers enter the VCSEL market? What are the challenges for epihouses who want to switch from LEDs to VCSELs or microLEDs? This report provides an overview of the GaAs industrial landscape, covering the value chain from wafer and epitaxy to device. This report also outlines Yole Développement’s
understanding of the market’s current dynamics and future evolution. 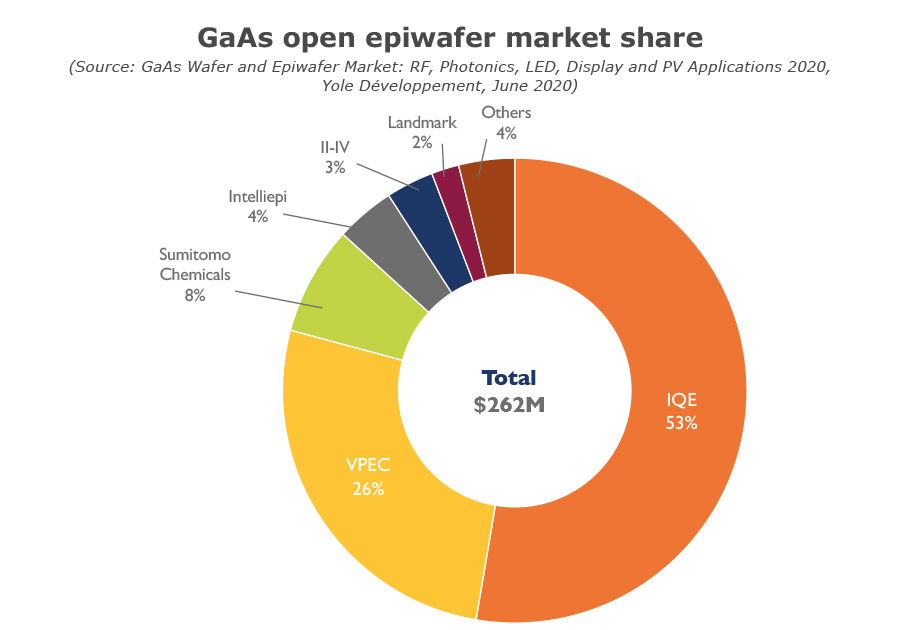