Air quality is breathing life into the sensor market!


OBJECTIVES OF THE REPORT

Identification and analysis of the applications:

Analyze and describe the technologies involved:

Note: The focus on Asia of this report has been realized in partnership with IEK Consulting.
IEK Consulting is a consulting service provided by the Industry, Science and Technology International Strategy Center of the Industrial Technology Research Institute (ITRI). ITRI has over 6,000 researchers whose research in applied technology covers information and communication: green energy; and the biomedical, materials and chemical industries. ITRI had devoted itself to advanced technology development and industry commercialization and made world-class achievements. For example, over 25 advanced technologies developed by ITRI have won the R&D 100 Awards in the past five years. IEK Consulting, with support from ITRI technology researchers, plays a key role as a world-class think tank in helping industry in Taiwan achieve value creation.

Market segmentation and description of the applications 47

Supply chain analysis: Who is working with who? 141

AIR QUALITY MONITORING IN CARS, HOMES AND OTHER BUILDINGS IS DRIVING THE GAS AND PARTICLE SENSOR MARKET

Outdoor air pollution is one of the major challenges of the 21st century, and about 4 million deaths globally are attributed to it, according to a World Health Organization (WHO) estimate in 2014.
Another estimate, from 2016, is that more than 90% of the world’s population lives in regions where air pollutant levels are higher than the WHO specified limits. Thus, there is a global drive to tackle this problem, specifically by developing and installing gas and particle sensors.

For a long time, the main gas and particle sensor market has been restricted to industrial applications. But nowadays, degradation of the air quality is impacting many different places, homes, offices, hotels, cars and urban areas. Air quality control is therefore becoming a selling argument to promote hotels or restaurants.

Historically, gas sensors were used to control air conditioning in buildings to save energy. Today, Yole Développement (Yole) analysts are observing a shift from comfort to safety as inhabitants want safe indoor air. This trend also extends to other environments, such as personal vehicles, public transportation, and homes.

As an example, the market for air purifier systems, which often embed gas and particle sensors, are expected to expand from $16B in 2017 to $33B in 2023 with a 12.5% Compound Annual Growth Rate (CAGR).

Commercial vehicles have increasingly adopted gas and particle sensors onboard to ensure high quality of air for their customers. Previously sensors were embedded in-cabin to activate the air conditioning system when CO2 and volatile organic compound (VOC) concentrations become critical. Today, additional sensors can be found out of the cabin to sense the outside environment and close the ventilation system if pollution is detected. Metal Oxide Semiconductor (MOS) is the preferred technology because of its low cost, small size and improved sensitivity compared to previous generation. To support this increasing market demand, historical players involved in gas sensors, such as Paragon, and Amphenol, which has acquired SGX, are developing particle sensors. The big sensor leaders like Bosch and ams have identified the air quality market as a very promising one. They are therefore using their know-how to develop new technical solutions for both gas and particle sensing.
Although it had big promise, the consumer segment is taking more time than expected to be a real significant share of the gas sensors market. Therefore some players are currently de-emphasized their efforts to enter this segment (in the short term (example: ams).

In this report, Yole analyzes the impact of the global air quality in every market segment. The main impacted segments are Heating, Ventilation and Air Conditioning (HVAC), consumer products and air comfort for transportation. Technical requirements, gases to be measured, market forecasts, technologies, main suppliers and regulations are fully described for each segment. Yole forecasts that the gas sensor market will top $1B in 2022! A chapter is dedicated to environmental combos and electronic noses technology developments as they are considered as the next steps to improve air quality sensing in several applications (but there are still challenges ahead, such as having the right use-case and structuring an industrial food chain for e-noses).. 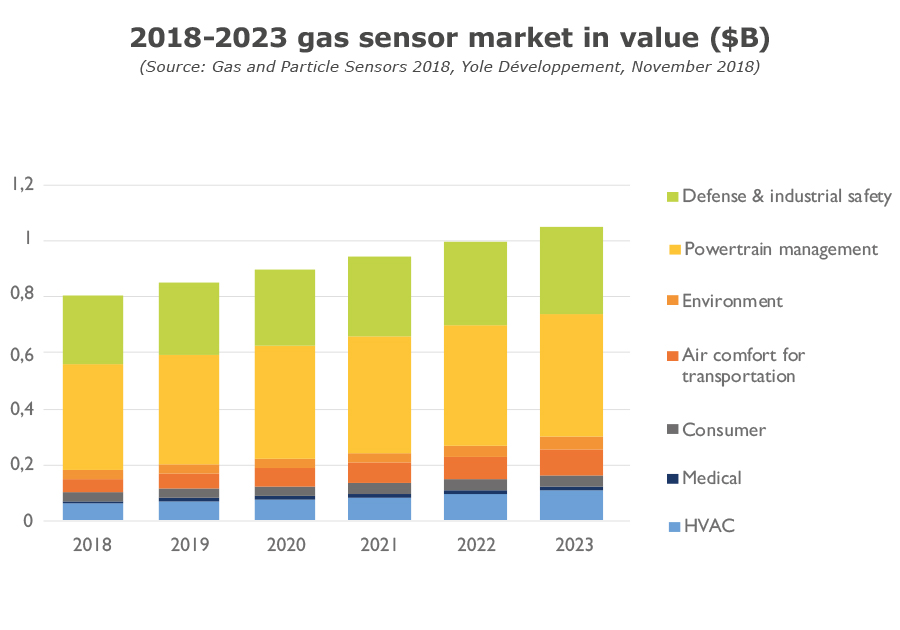 MOS HAS FINALLY FOUND ITS MARKET, BUT INFRA-RED (IR) TECHNOLOGY IS THE REFERENCE FOR PARTICLE SENSING

MOS has been around for many years but its lack of sensitivity has prevented widespread adoption of this technology. Today, the use of MOS technology has been boosted thanks to two applications: indoor/outdoor automotive and air purifiers. MOS is the best trade-off technology in cost and size for VOC measurement.

MOS is the reference technology in automotive air quality sensing, but only for gases. In consumer applications, miniaturized Non-Dispersive Infra-Red (NDIR) sensors compete with MOS. NDIR is more expensive, but its form factor is today close to MOS and its sensitivity is better. The final choice will be application-dependent.

On the other hand, optical is the reference technology for particle sensing. Particle monitoring is becoming even more important than gas sensing. Ultra-fine particles, below 1μm in diameter (PM1) are increasingly being watched as they are the most dangerous species for health. So most players are investigating particle sensors for PM1 and below.

Yole estimates the particle sensor market to be worth about $150M in 2017, growing to more than $200M in 2023. The market is less fragmented than the market for gas sensors as four players today share more than 90% of the market. So there is room for newcomers! 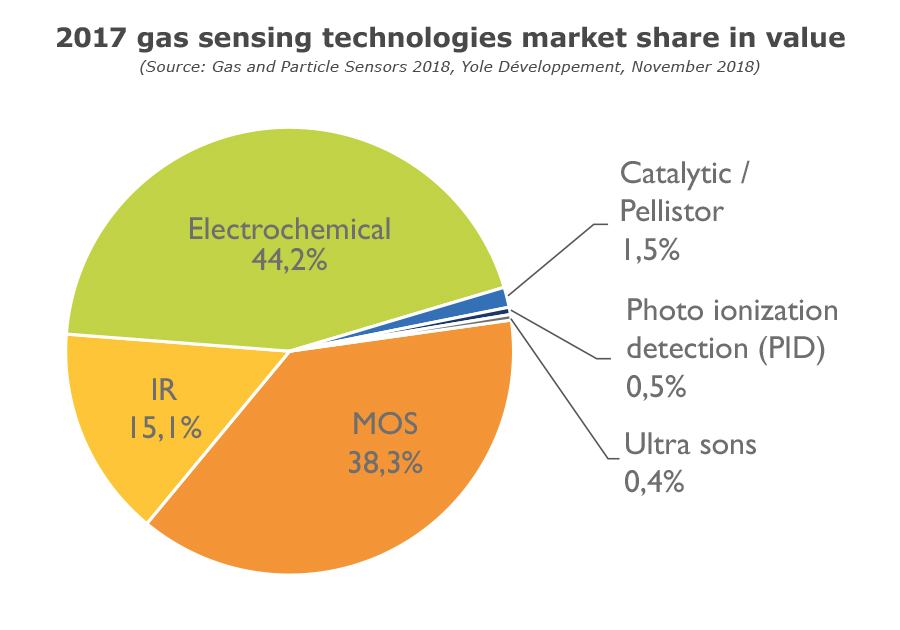 Because Asia is very concerned by air quality, our report includes a special chapter on the ecosystem of Asian players. The air purifier market is expected to ship about 20 million units annually by 2020. The Chinese market currently accounts for more than 95% of the global air purifier market, with these products using both dust and VOC sensors.

As a consequence, Asian players are developing their own technological portfolio for the local market. They cover all sensing technologies, but with geographical differences. For example, Japan and Taiwan are focusing on MOS and NDIR only, but China has all gas and particle technologies available.

The strong interest in gas and particle sensors in Asia and the large diversity in technology and R&D work are reflected by the Intellectual Property (IP) activity. Our report includes a chapter on IP activity in Asia. Patenting activity in China has strongly increased since 2010. On the contrary, patenting activity in other countries is almost stable. 85% of patents in China have been filed as priority patents and only 15% have been filed via an extension of their priority patent. In fact, there is an increasing number of Chinese companies and R&D labs among newcomers in the patent landscape since 2014.. 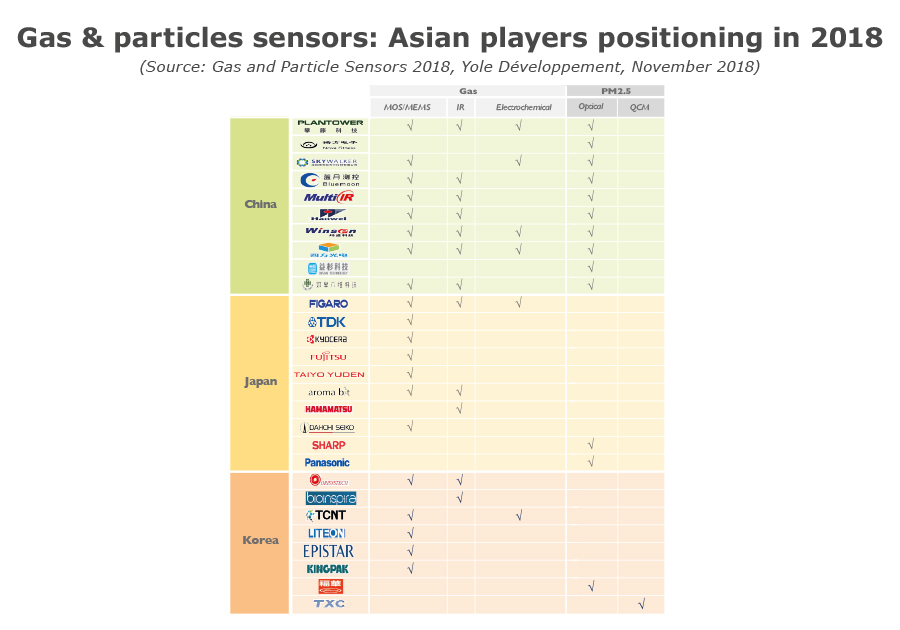 Comparison of four gas sensors for consumer applications made by Bosch, ams and Sensirion. 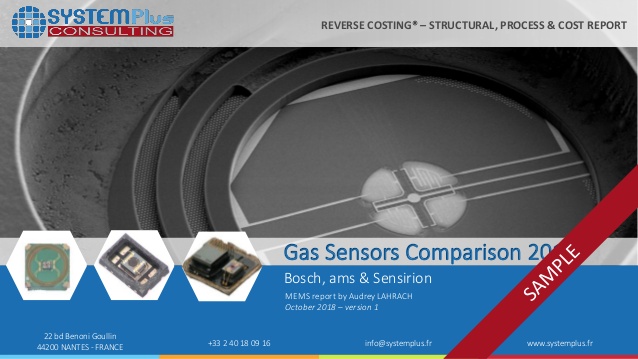