High-end inertial sensors are still the backbone of systems that will enable autonomous transportation and the new space industry despite COVID-19.

It was full speed ahead in 2019 for the aerospace and defense industries. The estimated global defense/military spending was approximately $1,800B according to the Stockholm International Peace Research Institute (SIPRI), with the US accounting for a record $760 billion defense expenditure. High-end inertial units are one of the key components in these systems, for navigation, stabilization and other purposes.

In 2019, we estimate that the global high-end inertial systems market was worth $3.25B, which remains highly fragmented with many applications.
In 2020, the Covid-19 pandemic has drastically affected all end-markets with various outlooks.

The defense market expects no significant effect, since military programs are still running and budgets have already been allocated. There could possibly be some delay in shipments due to supply chain/logistics problems which could hinder annual growth. Nevertheless, there is a strong interest in resilient Positioning, Navigation and Timing (PNT) solutions for GPS-denied environments and against GPS-jamming, when navigation is of paramount importance in critical missions.

The future for commercial aerospace looks grim. Air travel has paralyzed due to the pandemic and future plane orders have been revised downwards. For sure, long-range wide-body aircraft will suffer. There is a ray of hope for aerospace contractors (sensors, systems, etc) from the possibility of strengthening short-haul, regional flights that will require more narrow-body aircraft, but nothing is yet certain.

Commercial aerospace/civil aviation will take a few years to recover to pre-covid levels. Between 2019-2025, a -0.4% CAGR is expected for high-end inertial systems associated with this market. On the other hand, UAV, drones, micro/nano-satellites and new space applications (reusable rockets, spacecraft, etc) are expected to grow faster.

The commercial naval market will be negatively affected from Covid-19 in the short term (less cruise ships, less tankers/logistics ships) but in the longer term it is expected to grow at a CAGR2019-2025 of 2%, driven by traditional gyrocompass and antenna stabilization. AUV/ROV could show some promising growth.

Regarding the industrial market we expect it to drop in 2020 due to the pandemic after-effects, especially due to supply chain problems in general but also due to some drilling applications, since oil & gas projects have been postponed or cancelled. The market will recover in 2021 resuming its growth and is expected to double in size in 5 years, driven by long-awaited industrial applications that we predicted before and have already made their first baby steps: robotic cars, autonomous robots (collaborative, delivery, etc), Industrial Internet of Things (IIoT) and microsatellites. New players in these domains come from various backgrounds and are ready to adopt inertial technologies. In these high-volume applications, integrators will be probably technology-agnostic and a good cost, size, weight and power (C-SWAP) could prove beneficial.
This is definitely a market to watch out for. 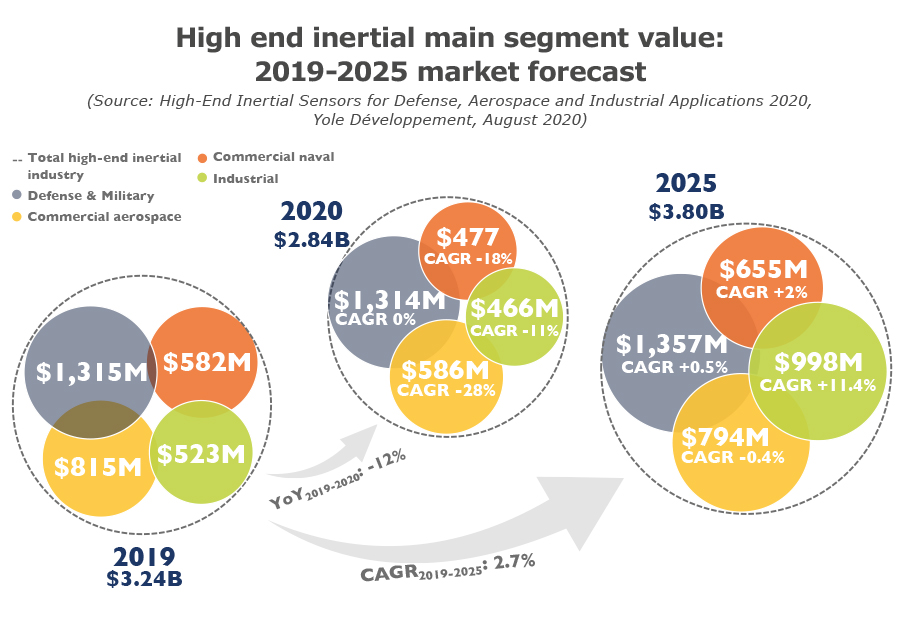 SHOULD THE TRADITIONAL LEADERS THAT DOMINATE THE MARKET WORRY ABOUT INERTIAL TECHNOLOGY LIFE-CYCLES?

The inertial system market has passed through different technological stages. Indeed, some changes seem to appear on the market in almost 20-year technology cycles from first application to maturity. Initially, mechanical gyros appeared, and then optical ring laser gyroscopes (RLGs) and FOGs followed. Honeywell still dominates the market with its legacy RLG technology, while Northrop Grumman and Safran dominate the FOG market. Other smaller FOG companies such as iXblue and KVH are trying to evolve by expanding their capabilities to compete against RLG in the higher-performance segment and against silicon MEMS in the lower performance segment. KVH is chasing high-volume manufacturing with its newly announced photonic FOG, which is a miniaturized version of a FOG that could be used in autonomous vehicles and is already in evaluation programs.

Currently, the HRG phase is reaching maturity, thanks to interesting breakthroughs in high volume manufacturing, especially by Safran. This may change the landscape in mid-term, and this could also potentially impact the RLG business.

Nevertheless, MEMS has made its debut in the high-end inertial systems market. While traditionally originating from consumer and other low-end commercial applications, silicon MEMS has a low C-SWAP. It is continuously improving and pushing FOG out of many industrial and some tactical applications that are considered high-end, at 1-10°/h in-run bias instability performance. However, silicon MEMS gyros are still immature to expand in other applications that require bias instability below 1°/h. Could this become reality in the 10-20 year timeframe? Many traditional players are trying to ride the upcoming MEMS wave, such as Honeywell, NG, Safran, and Collins Aerospace as part of now Raytheon Technologies (ex-UTC), who are already using silicon MEMS technologies. 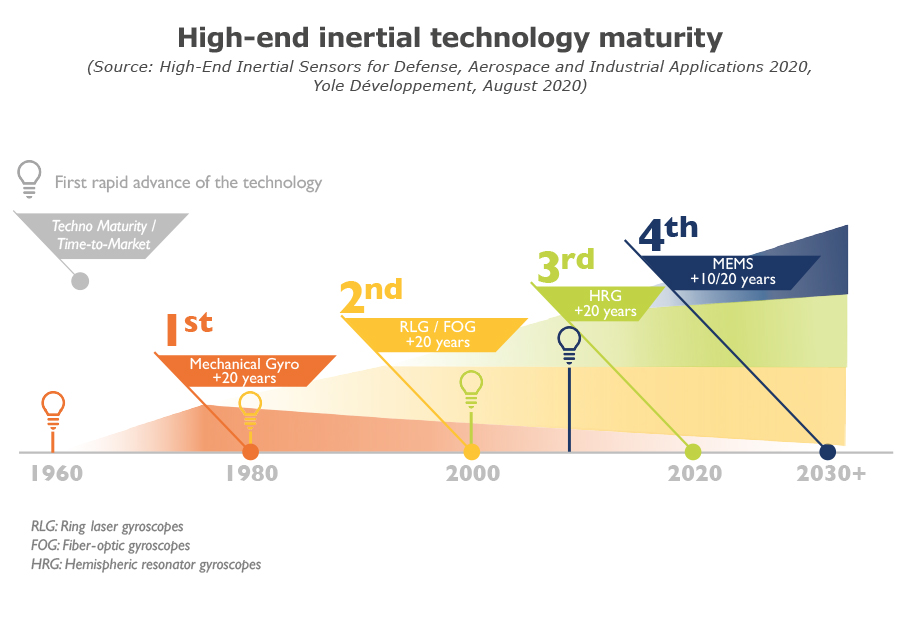 THE GEOGRAPHICAL WINNER AND WHAT THE FUTURE HOLDS

The inertial system landscape has been traditionally pretty stable. Both in US and globally, Honeywell is still the leader with NG following. Other notable but smaller players include KVH, Kearfott and Emcore/SDI. US companies rule over the high-end inertial systems market, with Europe and Asia as runner-ups.

On one hand, the European inertial market is dominated by Safran, which is by far the biggest player, with revenues that are an order of magnitude higher than other players such as Raytheon Anschutz, iXblue, Sensonor, Meggitt, GEM elettronica, iMAR, Kongsberg, and IAI. On the other hand, a very fragmented market exists in Asia and the rest of the world. The biggest identified players include CASC, JAE and Silicon Sensing. Chinese developments in inertial technologies originate in either military or academic environments, which are difficult to access. Still, the Chinese market should be closely monitored as many developments are ongoing in the domains of high interest such as structure monitoring in IIoT, microsatellites and general autonomous mobility.

It is important for the companies involved in the high-end inertial market to invest in the right technologies and partners, depending on the end applications targeted.

The market is still dominated by the three giants, thanks to their large portfolios. All technologies have a long lifetime, due to the specifications of the market, and no abrupt shift from one technology to the others is expected, requiring those players to keep their technology up to date. This means no outrageous shifts in geographical leadership are expected. However, one can wonder whether, looking at long term, those players will face strong competition and market disruption that could potentially emerge from local giants in China or Amazon/Boston Dynamics-like players in industrial and emerging applications, where needs and requirements are quite different from what they are used to deal with. How can they be giants with the agility of a small company to address highly customized and dynamic markets that are leading this disruption? Because, in the end, the question isn’t if, but when that disruption will happen. 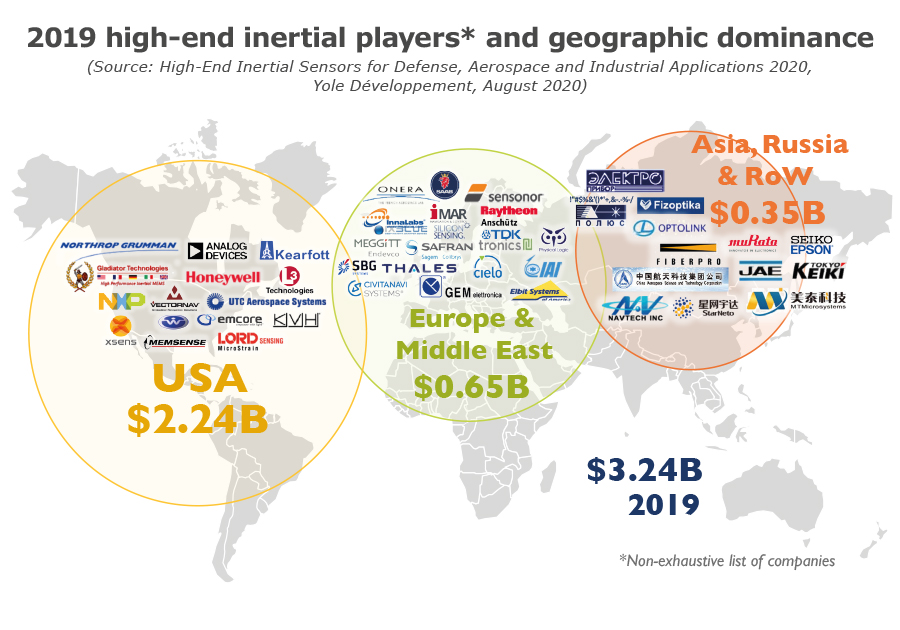