High-performance computing and ADAS are driving the growth of 3D performance packaging, requiring a development platform for new technologies and reaching $7.87B in 2027.

Objectives of this report

Key features of this report

Companies cited in this report

Why do We Need High-end Performance Packaging?

High-end Performance Packaging platforms are UHD FO, embedded Si bridge, Si interposer, 3D stack memory, and 3DSoC. Embedded Si bridge has two solutions: LSI from TSMC and EMIB from Intel. For Si interposer, there is a classic version usually provided by TSMC, Samsung, and UMC, and an active one which is Intel’s Foveros. EMIB combined with Foveros gives birth to Co-EMIB, which is used for Intel’s Ponte Vecchio. Meanwhile, 3D stack memory is represented by three categories: HBM, 3DS, and 3D NAND stack.

Datacenter networking, high-performance computing, and autonomous vehicles are pushing the adoption of high-end performance packaging, along with its evolution from a technology point of view. Today the trend is to have bigger computing resources at cloud, edge computing, and device level. Therefore, an increasing demand is fueling High-end Performance Packaging adoption. 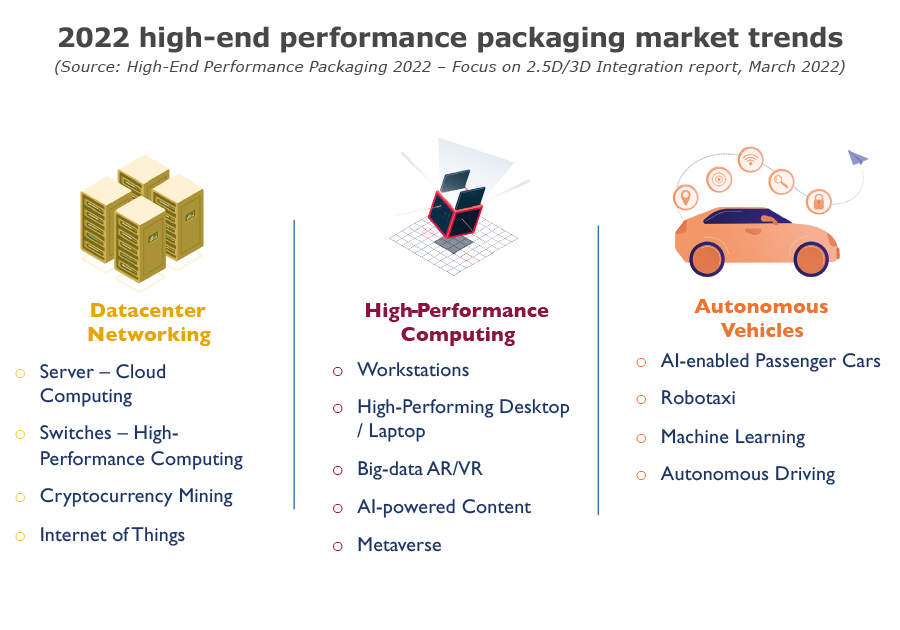 High-end Performance Packaging market revenue is forecast to reach $7.87B by 2027, up from $2.74B in 2021 and with a CAGR2021-2027 of 19%. UHD FO, HBM, 3DS, and active Si interposer are considered to represent more than 50% of combined market share by 2027, being the biggest contributor to market growth. Embedded Si bridge, 3D NAND stack, 3D SoC, and HBM are the top four fastest-growing contributors, each with a CAGR bigger than 20%. This evolution is possible due to the rapid growth of high-end performance applications and artificial intelligence in the telecom & infrastructure and mobile & consumer end-markets. High-end Performance Packaging represents a relatively small business, but with a huge impact on the semiconductor industry as it is one of the key solutions helping to meet More-than-Moore requirements. 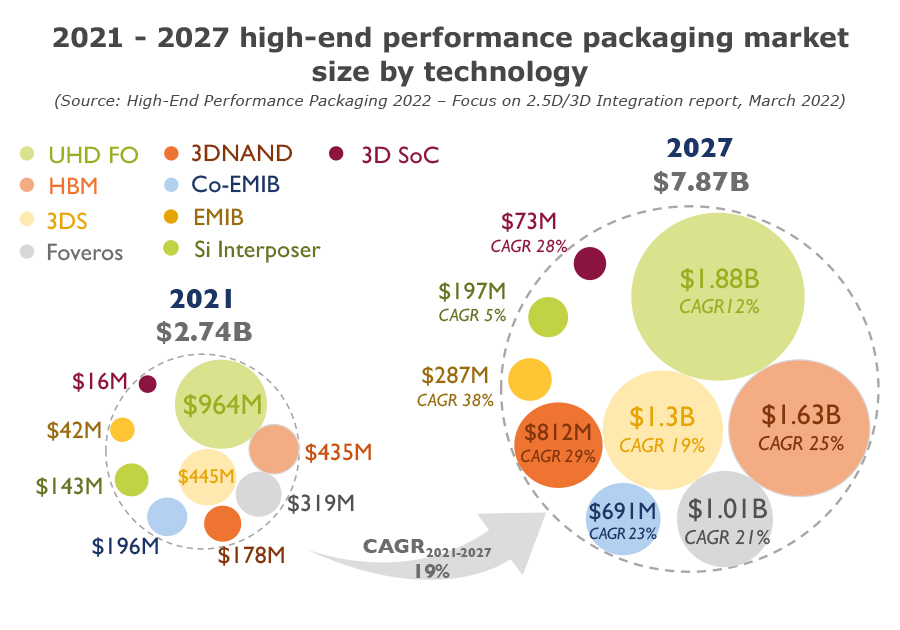 Who are the Winners, or Losers?

In 2021, CapEx investments of about $11.6B were made for package activity by top players, as they are conscious about its enormous importance for fighting the slowdown of Moore’s Law.

Intel is the top investor, with $3.5B. Its 3D chip stacking technology is Foveros, which consist of stacking a die on an active silicon interposer. Embedded multi-die interconnect bridge is its 2.5D packaging solution utilizing 55-micron bump pitch. The combination of Foveros and EMIB gives birth to Co-EMIB, used for Ponte Vecchio GPU. Intel plans to adopt hybrid bonding technology for Foveros Direct.

TSMC is following through with $3.05B of CapEx. While securing more business for UHD FO with its InFO solutions, TSMC is also defining new system-level roadmaps and technology for 3D SoC. Its CoWoS platform is offering solutions as RDL or silicon interposers, while its LSI platform is a direct competitor for EMIB. TSMC has emerged as a High-end Packaging powerhouse with leading FE advanced nodes allowing to dominate next-generation system-level packaging.

Samsung has its I-Cube technology, which is similar to CoWoS-S. Samsung is one of the 3D stack memory solution leaders, providing HBM and 3DS. Its X-Cube will use hybrid bonding interconnect.

Boasting a U.S. $2B estimated CapEx, ASE is the biggest and only OSAT trying to compete with foundry and IDMs for packaging activity. With its FoCoS product, ASE is also the only OSAT with a UHD FO solution at the moment.

OSATs don’t have the financial and front-end capabilities to keep pace with big players like Intel, TSMC, and Samsung in the advanced packaging race. Therefore, they are followers. 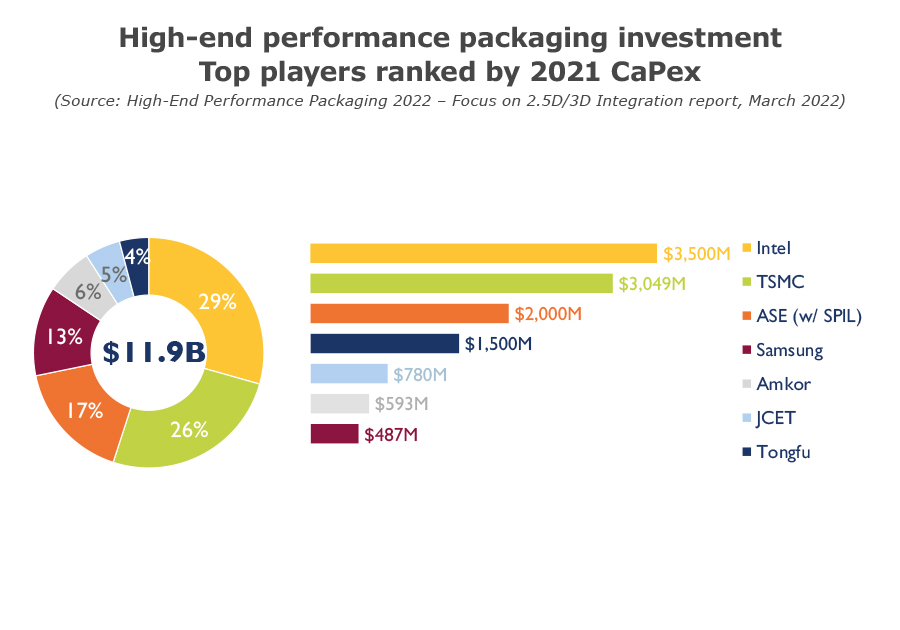 Status of the Advanced Packaging Industry 2021