SSD controllers bridge the flash memory to the host device and are designed to offer improved memory efficiency and performance, as well as lower power consumption, while also improving both component durability and reliability of the SSD. Major NAND manufacturers have introduced in-house-designed SSD controllers to power their solid-state drives. The desire to internally develop their own SSD controllers is not only motivated by cost factors, but also for keeping the NAND memory design information internally and eliminating dependency on third-party controllers. Acquisition of SSD controller startups and design houses has been part of the strategy to becoming self-reliant since this could result in a reduced overall cost of SSD controllers. This report includes three in-house SSD controllers from Micron, Samsung, and SK hynix, along with two third-party SSD controllers from Silicon Motion and Phison.

This report analyzes the SM2265G controller used in SK hynix’s Gold P31 PCl3.0 SSD; the DM02A1 controller used in the Micron’s 3400 PCI4.0; the S4LV003 controller used in Samsung’s 980 PRO PCI4.0 SSD; Silicon Motion’s SM2265G used in Intel’s 670p PCI3.0 SSD; and Phison’s PS5018-E18 controller used in the Sabrent Rocket 4 Plus PCI4.0. This report also includes information on the solid-state drive, and the controller packages are torn down to provide package details and cross-sections. The package opening reveals the die placement in the package. A full analysis of the die is found in this report, accompanied by optical and high-resolution SEM images of the controller die cross-section that are used to identify the die process. Die delayering offers insight on the transistor process, including the embedded SRAM memory integrated in the die process. Moreover, this report covers the manufacturing process of the controller and furnishes a cost analysis of the wafer, die, and component cost. Lastly, a comparison of the SSD controllers studies the physical differences and similarities of the five controllers, including a cost comparison. 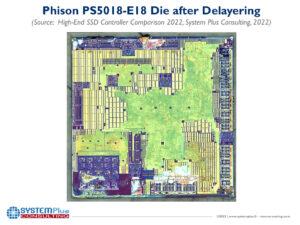 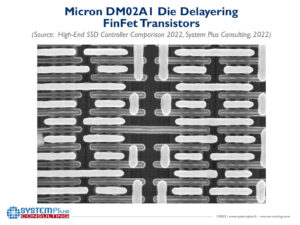