The horticultural lighting market’s current boom is driven mostly by greenhouse applications, for which artificial lighting is used to compensate for natural light variations and increase production yield. For these applications, traditional light sources like fluorescent and high-pressure sodium (HPS) lamps are currently the most popular solutions. However, LED technology is catching up and recent developments have allowed the technology to enter the horticultural lighting market. LED’s primary advantage is its low power consumption compared to incumbent technologies, which allows for a lower energy cost. Also, LED-based systems produce less heat, which allows for inter-lighting: LED luminaires can be placed near a lower layer of plants that are usually shaded from light by the upper layer, and increase their production consistency, or yield.

Greenhouse applications represent only the tip of the iceberg in this business, and new applications, mainly driven by urban farming, are likely to make the horticultural lighting market boom in the mid/long-term. Nowadays, arable land is usually far from big cities and metropolises with millions of people. And as consumers become more conscious of how and where their food is produced, farmers are finding it more difficult to keep up with urban growth. City farming represents a potential solution to handle these needs and challenges by allowing for the growth of plants, fruits, and vegetables in a confined environment, on multiple layers (to maximize production), and without sunlight (i.e. using only artificial light).

In the short-term, these new indoor horticultural applications (and their related industries) are likely to emerge within the culture surrounding high added-value plants (i.e. medicinal plants). A perfect example is the flourishing medicinal cannabis business in North America, which has sparked the emergence of innumerable companies dedicated to this culture. However, urban farming will not be limited to just high-end products – in fact, several urban/vertical farms are already being developed in different parts of the world to produce common vegetables like radishes, lettuce, and basil.

This report provides an analysis of horticultural lighting applications and technologies, and details the function of grow lights and different light source types, as well as current and emerging/new applications. 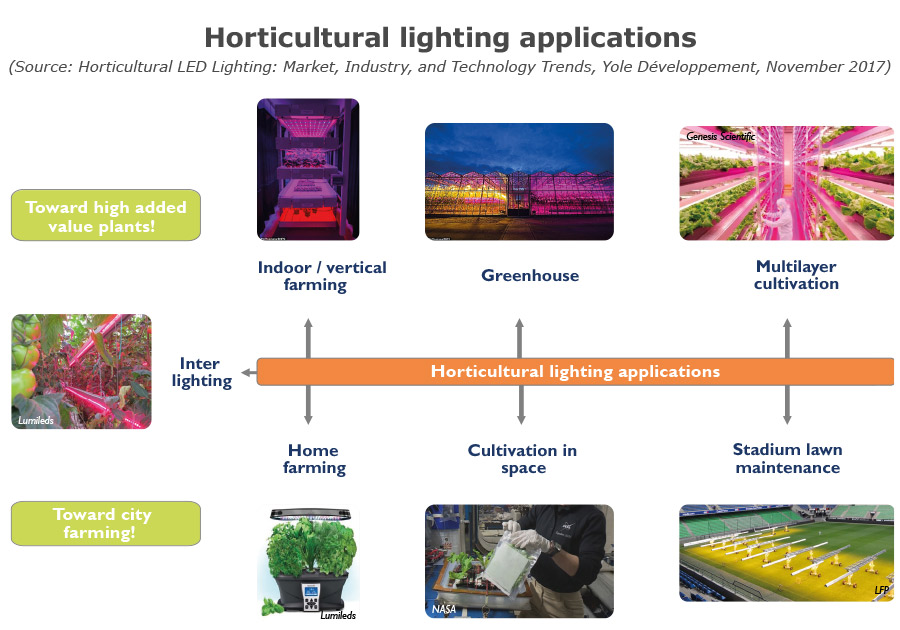 BY 2022, A POTENTIAL MARKET OPPORTUNITY OF MORE THAN $8.5B AT SYSTEM LEVEL

The 2016 horticultural lighting market (i.e. system level) represented a business of ~$3.1B, which should grow to ~$3.8B in 2017. The current business is mostly driven by greenhouse applications (~92% in 2017) and incumbent technologies (~79% in 2017), but a transition to LED technology and the emergence of new applications will further increase this market’s size and attractiveness, both at system and LED device levels. In this context, we expect the horticultural lighting market to reach nearly $8.6B in 2022 (at a CAGR of 17.8%) – but this is only a starting point. Indoor/vertical farms are poised to boom from 2022 – 2027, propelling the total market to more than $17B in 2027.

This report analyzes the horticultural lighting market landscape, detailing 2017-2022 market forecast (in revenue and volume), split by applications, and more. 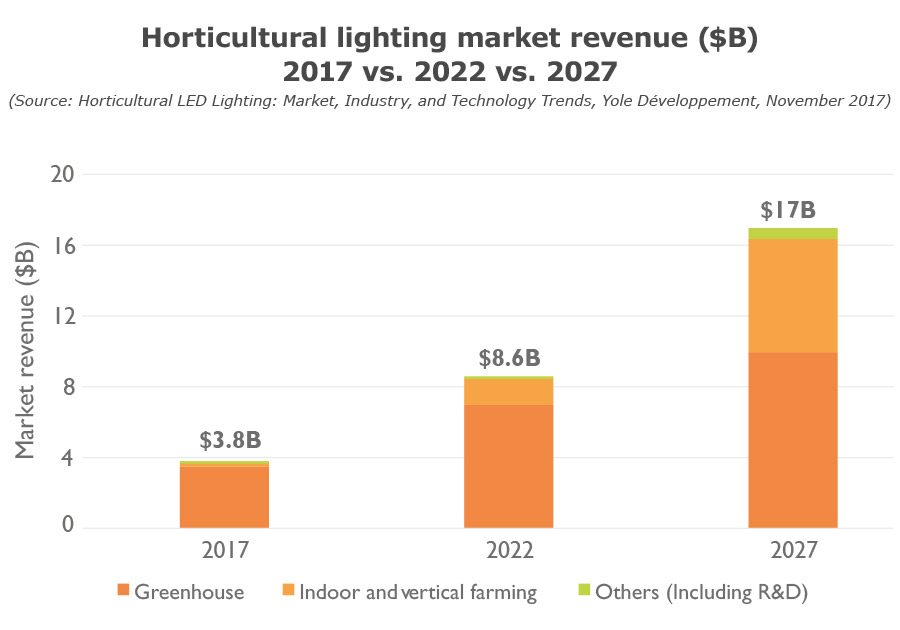 LED TECHNOLOGY: A POTENTIAL GAME-CHANGER IN THE HORTICULTURAL LIGHTING INDUSTRY

In a global lighting market that is becoming increasingly competitive, horticultural lighting is seen by the LED lighting industry as a new opportunity for which to develop high added-value products and reap greater margin levels. However, established LED players also face competition from new entrants (mostly start-ups and SMEs) desiring their own share of this growing opportunity.

As of Q4/2017, the LED horticultural lighting industry is still small, with less than 50 players identified as offering dedicated LED-based systems. The industry is highly concentrated in North America (50%), the result of medicinal cannabis’s legalization.

Looking ahead, industry evolution will strongly depend on market dynamics. Indeed, industrial players’ marketing and communications are currently focused on two main applications:

Part of the established lighting system industry may never proceed (at least visibly) with the first application (medicinal plants), in order to preserve brand reputation. Such a situation is likely to benefit new entrants that will generate revenue swiftly and rapidly increase their horticultural lighting market expertise.

The missing block in the supply chain is mostly at the module level, with no real supplier in 2017 – reason being that the market is still emerging and the industry is still young, with no standards and regulations. In this context, each lighting system manufacturer design its own module with a specific wavelength mix/recipe.

Some companies are finally starting to position themselves as solution providers, offering not only lighting systems but global solutions integrating sensors (humidity, oxygen, etc.) and data management software. The objective of these smart lighting systems is to further increase the productivity of greenhouses and urban farms. 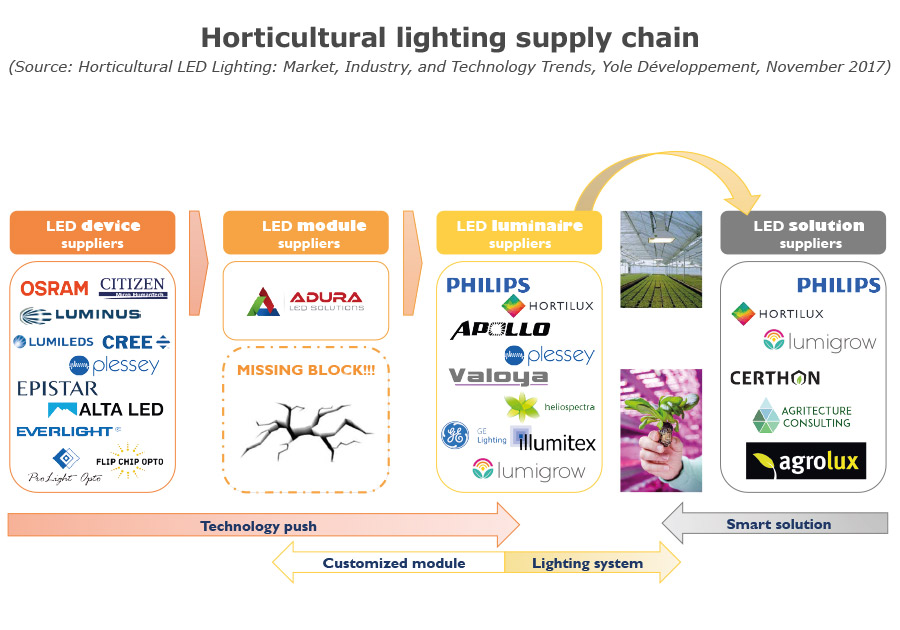