Paramount to the future of safety and autonomy, the automotive imaging market is at a key crossroads.

Vision of the future 166

AUTOMOTIVE HAS BECOME A KEY MARKET FOR IMAGING TECHNOLOGIES

Cameras are now standard equipment for automobiles, with 124M image sensors shipped in 2018. Automotive camera modules have reached $3B and are expected to grow at an 11% CAGR, reaching $5.7B by 2024.

Over the past five years, viewing applications have been at the core of market growth – with rearview, surround-view, and black box becoming ubiquitous. Advanced Driver Assistance Systems (ADAS) cameras, which currently represent 40% of the business, will provide additional growth for years to come thanks to growing adoption rates.

Formerly considered as a secondary market for imaging companies, automotive is now central to every key player’s strategy: firstly because revenue and volume have reached a significant level even when compared to mobile, and secondly because of artificial intelligence’s (AI) far-reaching impact, which powers ADAS.

As the first full-scale edge computing application, imaging for automotive has positioned itself as a key “center of gravity” for imaging technologies during the transition from imaging to sensing applications. This second Imaging for Automotive report from Yole Développement presents an all-new picture of an industry where AI-powered vision computing provides additional momentum to various applications and technologies. 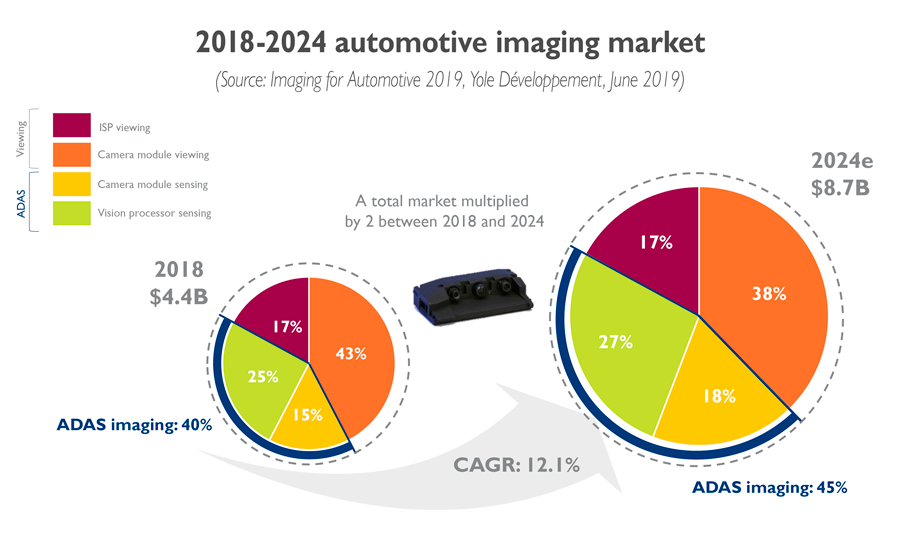 Over the past decade, the ecosystem has gradually structured itself according to traditional OEM and Tier-1 links. Nevertheless, automotive imaging’s impact has been tremendous, with mega-merger & acquisitions (Mobileye, Trw, Wabco, Harman) revolving around the topics of ADAS autonomous driving (AD).

Interestingly, the eruption of imaging in automotive has not fully benefit big incumbents like Bosch, Denso, Sony, and Samsung, which now must double their efforts in order to get back in the game. Intel and Sony will certainly use their respective strength and #1 overall position to gain market share in automotive, but already-established players like Xilinx, Toshiba, ON Semiconductor, and Omnivision definitely have an edge in this conservative, price-sensitive market.

The biggest difficulty ahead is the transition to AD, with the steepest step to climb being the transition to Level 3 autonomy. In this respect, the knowledge some players may gain from robotic vehicle approaches should become a key asset in the ongoing market-share battle. Also, new companies offering innovative imaging approaches will have a window of opportunity before 2025.

Today’s approach is to use “brute force” computing to solve deep learning algorithms “on the edge”. Sensors serving the current paradigm already offer far superior resolution, frame rate, and dynamic range than even the latest supercomputing chips can process. For this reason, the industry is seeking the next AI paradigm to fully deliver on AD’s promises. No doubt there will be more “Mobileye success stories” to come. 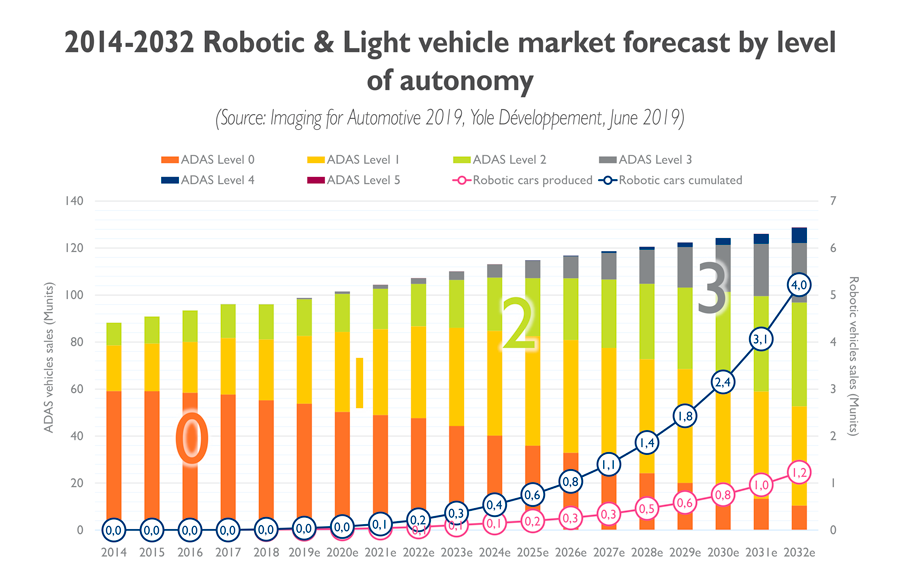 NEW FUNCTIONALITIES AND NOVEL TECHNOLOGIES ARE TRANSFORMING THE ENTIRE INDUSTRY

Automotive applications used to be straightforward: rearview cameras and forward ADAS cameras, for the most part. But the situation has changed dramatically and the technological consequences may prove dramatic as well. For example, on the viewing side of the market, surround-view cameras crave expansion in lower-end markets, which should change the way ISPs are used. Then there are the mirror replacement cameras, also called “e-mirrors”, where technical performance should far transcend the current viewing cameras.

On the ADAS side of the market, the in-cabin application is being highly scrutinized by many CIS players, mostly pushed by regulations. Moving forward, market acceptance will be interesting to monitor. The big question for reaching Level 3 autonomy is the technology selected for ADAS surround cameras. Data overload is obviously around the corner, and brute-force computing approaches, i.e. using a 180Tops ASIC (such as the FSD from Tesla) will not be possible or preferred for every OEM.

A new technology paradigm is brewing, but typical of automotive technology’s slow rate of introduction, it could take 3 – 5 years to manifest. The industry’s future is at sake at a time when autonomous driving is often dubbed as “still distant”. Of course, this chatter may just be a disinformation scheme to disguise a forthcoming radical transformation of the worldwide transportation business model. However things unfold, imaging technology will be at the center of transformation. 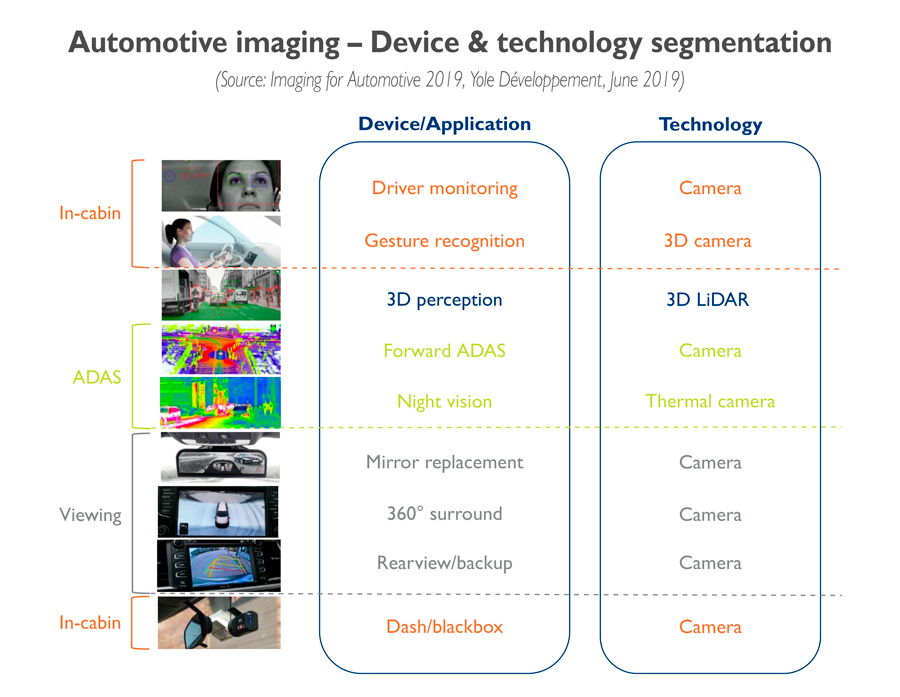