Is rationalization happening in the LiDAR market?

THE LIDAR MARKET IS ON TRACK FOR FAST GROWTH, DRIVEN BY ROBOTIC VEHICLES

The automotive LiDAR story began with a race. The Defence Advanced Research Projects Agency (DARPA) Grand Challenge was an autonomous vehicle race to encourage the development of fully autonomous ground vehicles. In 2005, for the second instance of that race, LiDAR was introduced. Two years later, in 2007, five of the six vehicles finishing that race embedded a LiDAR on their roofs. Since then, many companies have made their own prototypes of autonomous vehicles using LiDAR and carmakers have showed their interest in this technology. The development of robotic vehicles is accelerating, and one leader has emerged.

Waymo has a fleet of more than 600 vehicles today. Several announcements have been made about increasing this number up to 82,000 vehicles using Chrysler Pacifica Hybrid minivans and Jaguar I-Pace Sport-Utility Vehicles (SUVs). On the carmaker side, Audi has integrated a LiDAR, supplied by Valeo, in the A8 since the end of 2017. It is now expanding this feature to other vehicles such as the Q8, A7 and A6 as an option.

LiDAR adoption is on track and other carmakers have announced or are expected to integrate this technology in future vehicles. BMW has partnered with Innoviz to integrate a MEMS-based LiDAR by 2021, showing the development of solid state technology that will increasingly replace mechanical scanning technology. Regarding robotic vehicles, Waymo is not alone, as Baidu, Uber, Lyft and others are also emerging big players. As they are progressing rapidly, the total number of robotic vehicles is expected to reach 44,000 units by 2021. The total LiDAR market was worth $1.3B in 2018 and is expected to reach $6B by 2024. Automotive applications should represent 70% of the total market.

This comprehensive report covers market volume and value, from system to components. It includes a deep analysis of related technologies, players and the supply chain. 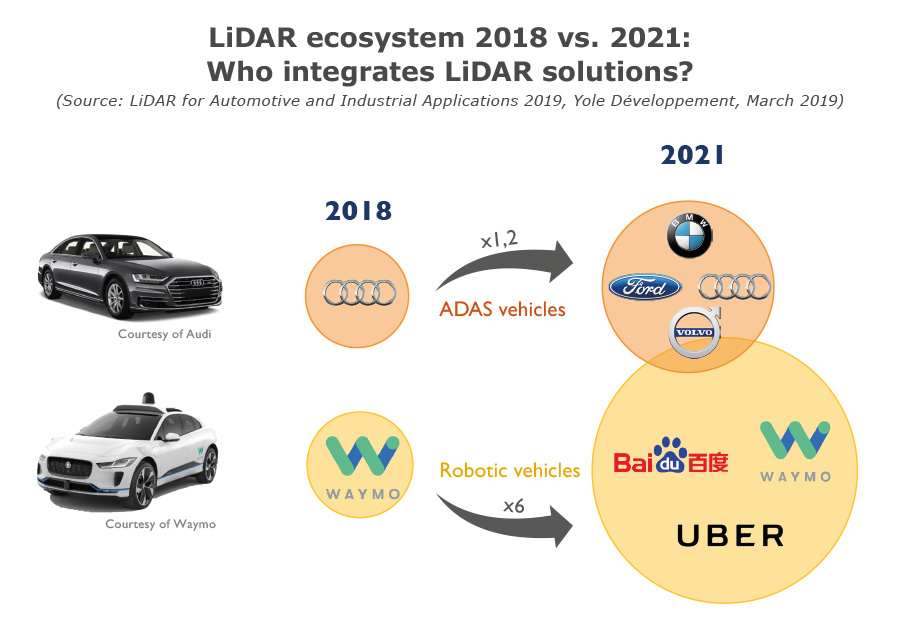 Huge investments have been made since 2016, surpassing $1B and showing the great interest in LiDAR technology and more generally autonomous driving features. MEMS is the technology attracting most investments, followed by optical phased arrays, although investments in the latter have considerably declined since 2016. Therefore, MEMS and flash technologies seem to be favoured by LiDAR manufacturers. These two technologies are promising and should be introduced rapidly into the market: MEMS will be introduced by BMW in 2021; flash is being pushed by Continental, expecting an introduction by a carmaker in 2020.

A majority of LiDAR manufacturers are using optical components at a wavelength of 905nm due to their large availability at a reasonable cost compared with 1550nm components. Edge emitting lasers and avalanche photodiodes at 905nm are typical components of LiDARs developed today. Other components like vertical cavity surface emitting lasers (VCSELs), single-photon avalanche diodes (SPADs), and silicon photomultipliers (SiPMs) can also be used. However, they are expected in the next generation of LiDAR, as time is needed to increase their performance and reduce their cost. There are plenty of LiDAR manufacturers and most of them are targeting the automotive industry and advanced driver assistance system (ADAS) vehicles. There will not be space for each of them and some will have to change their focus. Wind and topographic LiDAR markets are already in the hands of players like Hexagon Geosystems or Leosphere, but other markets such as industry or security could see the emergence of players coming from automotive.

This report provides a deep analysis of key components with roadmaps, cost breakdowns and analyses of the strategy of players involved. The report also covers other markets such as wind, topography and industrial. 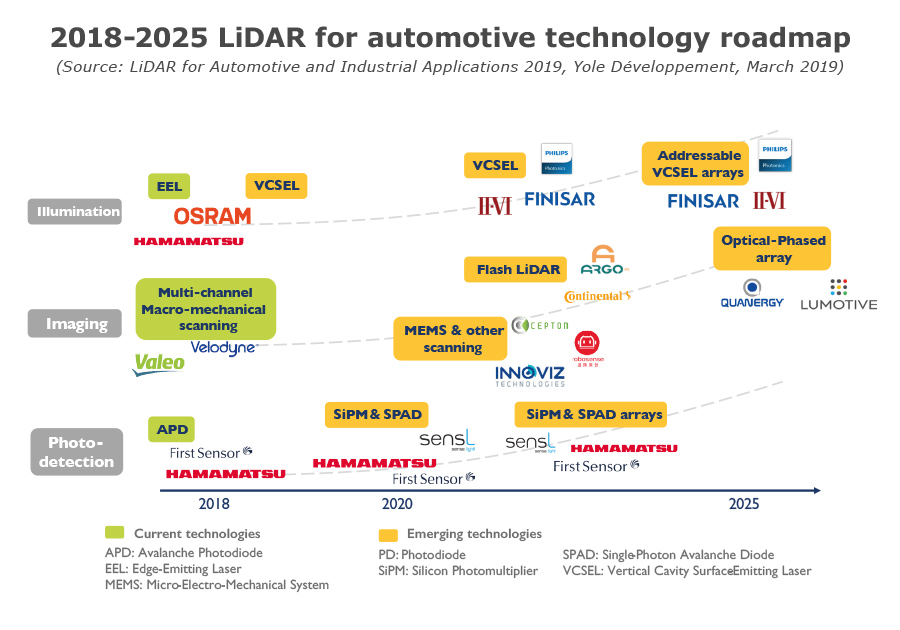 ARE OTHER SENSORS ABLE TO COMPETE WITH LIDAR?

Robotic vehicles are using multiple LiDARs to map the surroundings of the vehicle. The adoption of LiDAR appears necessary for a high level of redundancy between sensors to ensure the safety of its passengers. Regarding ADAS level 3 vehicles, which is where the automated system become able to monitor the environment, carmakers require triple redundancy between sensors. They are therefore working on integrating cameras, radars and LiDAR(s), but this integration takes time and is highly challenging. The place of LiDAR and the amount of data collected by these sensors that needs to be analysed by the computing unit are among the main challenges.

At the same time, other sensors are improving. The resolution of cameras is progressing as well as the associated image processing. Recent developments of radars have increased the vertical field of view and further developments of 4D radars will include imaging capability. Infrared sensors based on microbolometers could also be used for the redundancy carmakers want. Compared to LiDAR, the cost of these sensors is not so high, about $500 at first and then decreasing rapidly. This gives an opportunity for these sensors to be used instead of LiDARs.

Level 3 autonomy will only be possible in specific use cases like traffic jam driving. As a result, carmakers could reconsider their requirements and only use a combination of camera(s) and radar(s) that would appear good enough for this particular use case. Therefore, the LiDARs
would be limited to premium ADAS vehicles and robotic vehicles, considerably changing the LiDAR industry.

The reports analyzes the evolution of the LiDAR industry and the competition with other sensors used in automotive applications.