The introduction of the Compact Disc (CD) in 1982 relied on a double revolution: Using light to read music, and switching music from analog to digital. It transformed music expression as well, giving a sound clarity typical of the 1980s pop music and recognized today as a musical genre of its own.

The advent of the CD relied on numerous technologies, including three hardware innovations. CDs had to be patterned with sub-micrometer scale features: 500nm wide, 150nm deep and sometimes 830nm long.
With throughput of 900 discs per hour per line, new methods had to be developed.
Another key technology was the millimetersize lens elements used to optically read the digital music information written on the discs. A last key technology was the tracking system of the laser on the disc, which included autofocus (AF) technologies. This last part used mechatronics elements which were developed in the Walkman by Sony.

In 1999 and 2000, Kyocera, Samsung, and Sharp released the first mobile phones with cameras. The cameras needed millimetersize lens elements and small actuators for AF.
They relied on technologies developed for the CD. After nearly two decades of development and the popularization of photography in smartphones, these industries have become huge. Lens elements for mobile phones, produced mainly by injection molding, are a $2.1B market. Similarly, AF and optical image stabilization (OIS), operated by voice-coil motors (VCM), are worth $2.3B. 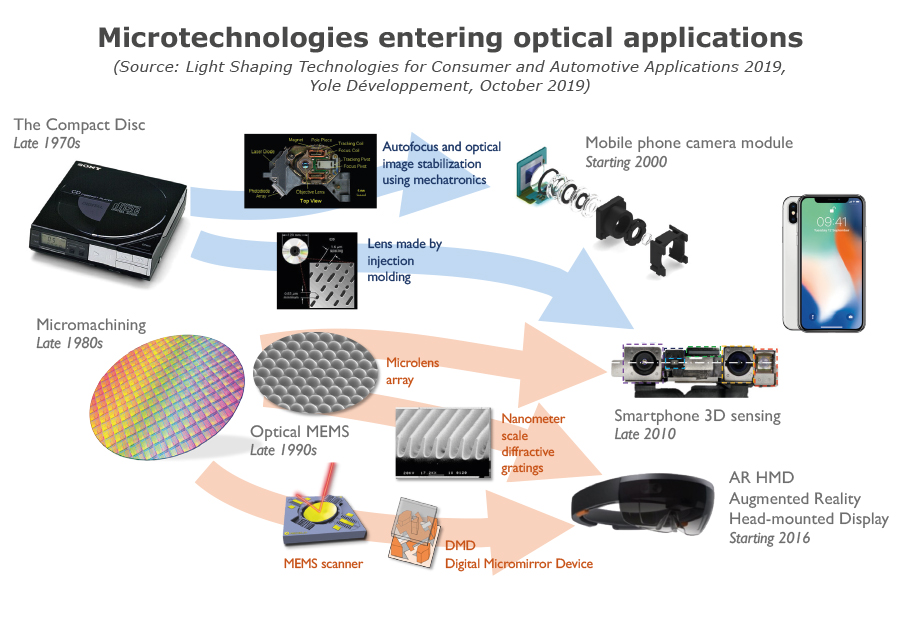 Simultaneously to the growth of injection molding for lens elements and mechatronics for VCMs, semiconductor technologies ventured outside of microelectronics applications. MEMS were officially invented in 1987, with their first applications in mechanics. The year 2000 was probably the start of the optical MEMS boom, with applications envisioned in the datacom industry among others, and devices such as micro-optical scanners, and optical switches.
However, a few years later, following the burst of the dot-com bubble, the boom of optical MEMS was over.

Yet optical applications of semiconductor manufacturing technologies have not disappeared. High growth is even expected. However, as often happens, the growth is not in the areas envisioned when the technologies emerged. Imaging has become central to the smartphone domain. First used for photography, imaging is moving further with its usage in 3D sensing. The release of the iPhone X by Apple in 2017 meant the popularization of face recognition based on 3D sensing. And 3D sensing is also expanding to the rear side of smartphones with applications in imaging and augmented reality. As a result, the market for diffractive elements and diffusers for 3D sensing in smartphones is expected to grow from $3M in 2018 to $35M in 2024 with a 51% Compound Annual Growth Rate (CAGR). 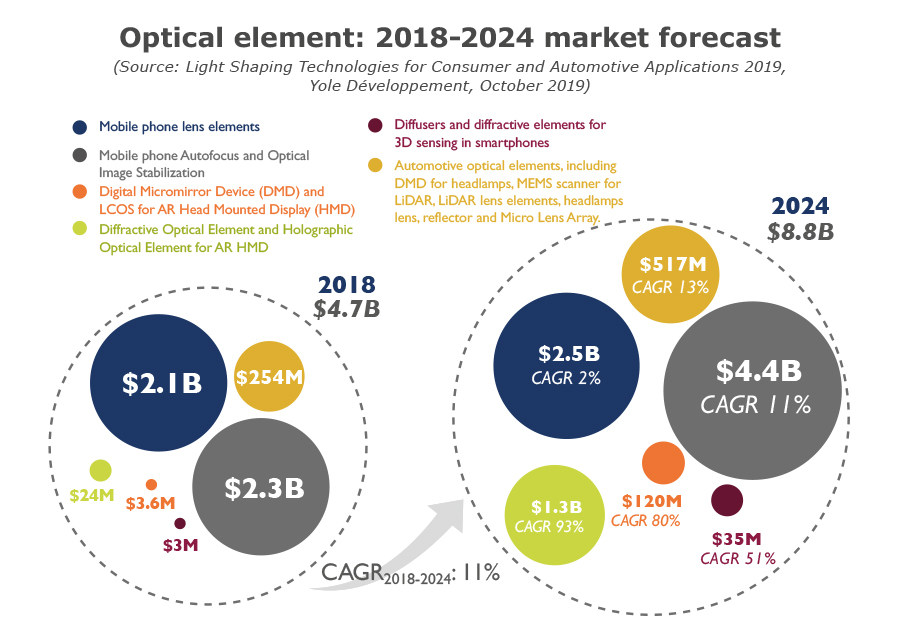 AUTOMOTIVE APPLICATIONS ON THE TECHNOLOGY ROADMAP

Consumer products are not the only area that benefits from optical microtechnologies. The automotive segment also benefits, even if the landscape is a bit more complex. Two applications are envisioned. One is autonomous driving with LiDAR. However, the technology is not expected to appear before 2021, resulting in a market for automotive LiDAR MEMS scanners of $1.2M in 2024. Another application is adaptive front lighting systems (AFLS) in which the front lighting system of a car is expected to adapt to the shape of the road and oncoming vehicles. As in LiDAR, various technologies are competing, the choice of which is not only based on performances but also on aesthetic considerations. As a result, the market for digital mirror devices (DMD) for automotive lighting is expected to reach $2.3M in 2024, while MEMS scanners for automotive lighting are not expected to enter the market before 2025. All things considered, the optical element market for automotive will grow from $254M in 2018 to $521M in 2024 with a 13% CAGR.

The story is not over yet. Although we have seen emerging markets for optical microtechnologies with 3D sensing in smartphones and AR HMD, as well as opportunities in automotive with LiDAR and adaptive front lighting systems, one obvious opportunity remains. The large market for smartphone lens elements, AF and OIS, which is today relying on legacy technologies, is difficult to challenge because of its size. Nevertheless, several technologies are challenging this situation. Wafer level optics challenge optical elements made by injection molding. MEMS actuators, piezo motors, and liquid crystal challenge VCMs. At some point, new technologies could diffuse into these applications. 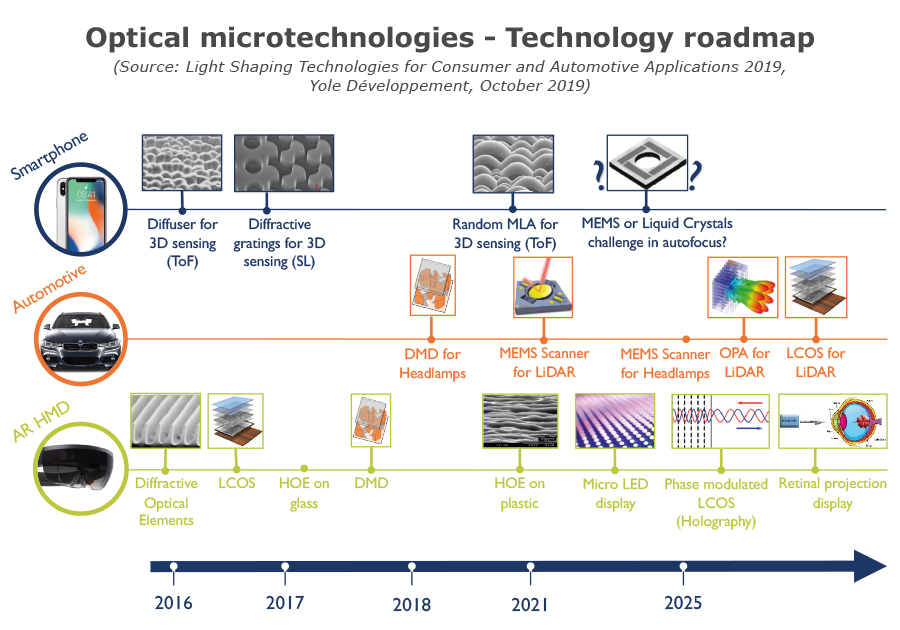 Companies cites in the report