Machine vision is at the heart of the automation revolution.

Scope of this report 9

MACHINE VISION IS AT THE HEAT OF THE AUTOMATION REVOLUTION

There is a silent revolution going on in factories. The transformative forces we are facing are similar to what happened during the previous industrial revolutions. But this transformation isn’t about steam or electricity. Today’s trend is autonomous and on-demand processes, for humans and machines alike. Inside factories the transformation is about automation.

Machine Vision (MV) is at the heart of this automation revolution. The MV camera market will grow from $2B in 2017 to roughly $4B in 2023, with a 12% Compound Annual Growth Rate (CAGR). Automation is not limited to robotics, but is involved in almost all machines and aspects of the manufacturing cycle. The need for quality has boosted MV in the automotive, electronic, semiconductor, food, and packaging industries. Food sorting is an interesting example of this push toward automation. The ability to sort fruits and food in general has helped to grow agro-food business revenues, especially in Asian markets. Indeed, MV has moved out of the factory. It is now on farms, on roadways for license plate recognition, and more recently in autonomous cars, the market for which we expect to grow at 140% CAGR starting this year.

These dynamics are here to stay. At the time of our last report, in 2014, the Swatch Group announced its Sistem51, a mechanical watch whose manufacturing is fully automated. Since then, other companies have made similar moves, such as Canon in camera manufacturing and Foxconn who announced the deployment of a million robots for manufacturing consumer electronic goods. Sales of automation products are therefore surpassing the growth of industrial production. The trend could accelerate in the future while cheap human labor is scarce in western countries and China is also increasing wages. 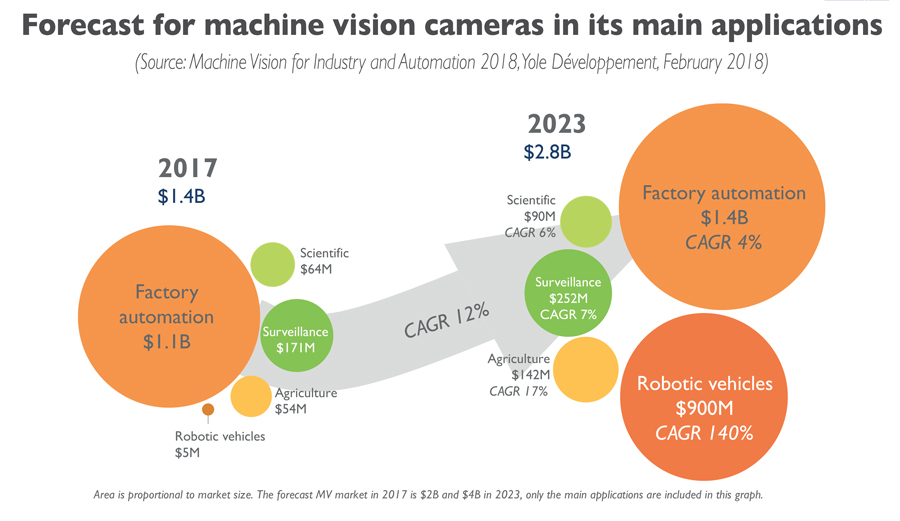 
The automation revolution has created a highly dynamic market and player ecosystem. In the three years from 2014 to 2017, merger and acquisition (M&A) activity has accelerated in MV both at image sensor and camera level. Among the latest examples of this trend are FLIR acquiring Pointgrey for $215M in 2016, and Teledyne acquiring e2v for $790M in 2017. Other notable acquisitions are ams’ acquisition of CMOSIS for $235M in 2016, and a little earlier in 2014 On Semi’s consolidation of Aptina for $400M and Truesense for $90M. Most recently, private equity firm Lakesight aggregated MV camera makers Tattile, Microtron and Chromasens. The total amount of M&A in this time period is approaching $1.7B.

The shift from Charge-Coupled Device (CCD) to CMOS has had a profound impact on image sensors for MV, driving this M&A wave. Although this affected other markets years ago, such as consumer image sensors in the 1990s and photography sensors in the early 2000s, it is only now that the shift from CCD to CMOS technology is reaching the high end of the imaging sensor market. The main direct consequence for companies selling high cost/low volume products is the inability to invest in or sustain manufacturing facilities that require high output due to the large fixed cost. The entry cost to establishing CMOS Image Sensor (CIS) manufacturing has been far too high for previous vertically-integrated CCD players. Therefore, all except Sony have shifted to the fabless business model suited to high-end “specialty products”. Dedicated foundries such as TPSCo, Dongbu Hitek and SMIC, who recently acquired LFoundry’s assets, have therefore emerged. 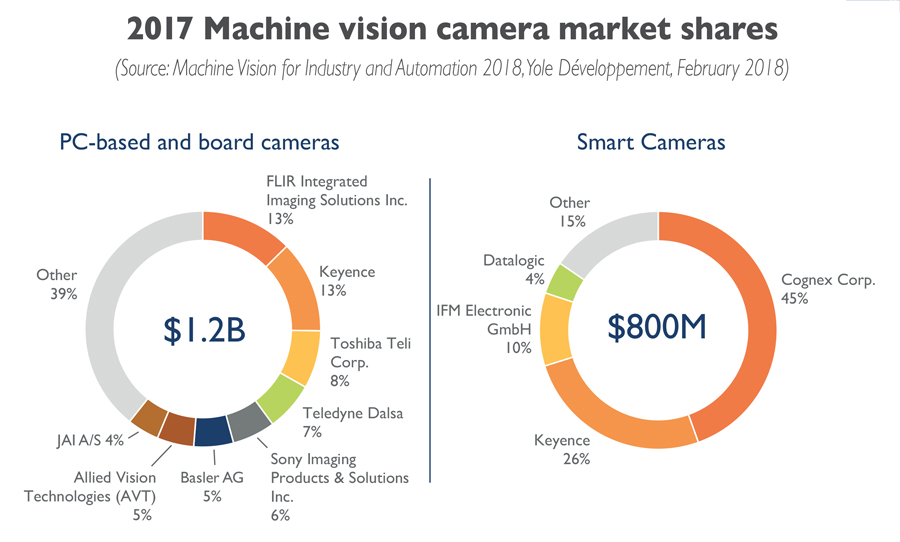 FROM CCD TO CMOS: MAJOR MODIFICATION AT THE CAMERA LEVEL THAT MIGHT LEAD TO THE EMERGENCE OF NEW PLAYERS

On the technology side, the transition from CCD to CMOS image sensors has greatly simplified camera design, trending toward commoditization. The integration of camera functions into the CMOS image sensor has also led to cameras fitting on a single board. This single board camera in turn places MV camera players higher in the supply chain. Consequently, we could see new camera players integrating these board cameras into new systems, applications, and smart cameras.

Integrating cameras into systems and smart cameras have also been boosted by technologies coming from smartphones. Systems-on-chips (SoCs) and the Mobilie Industry Processor Interface (MIPI) make it much easier to develop intelligent vision systems. One example of the spread of smart cameras is the recent multispectral product from Specim.

Another technology that will enable intelligent MV to spread is Machine Learning (ML). As an example, in 2017, Cognex acquired Vidi Systems, a deep learning software company, in order to implement ML into smart cameras. But MV and ML, among other technologies, will have an important impact on robotic vehicles. Annual robotic vehicle production could reach 150,000 units in 2027, and grow exponentially from there. By 2023, the market for industrial cameras for robotic vehicles could be worth more than $900M, suddenly becoming one quarter of the MV camera market. 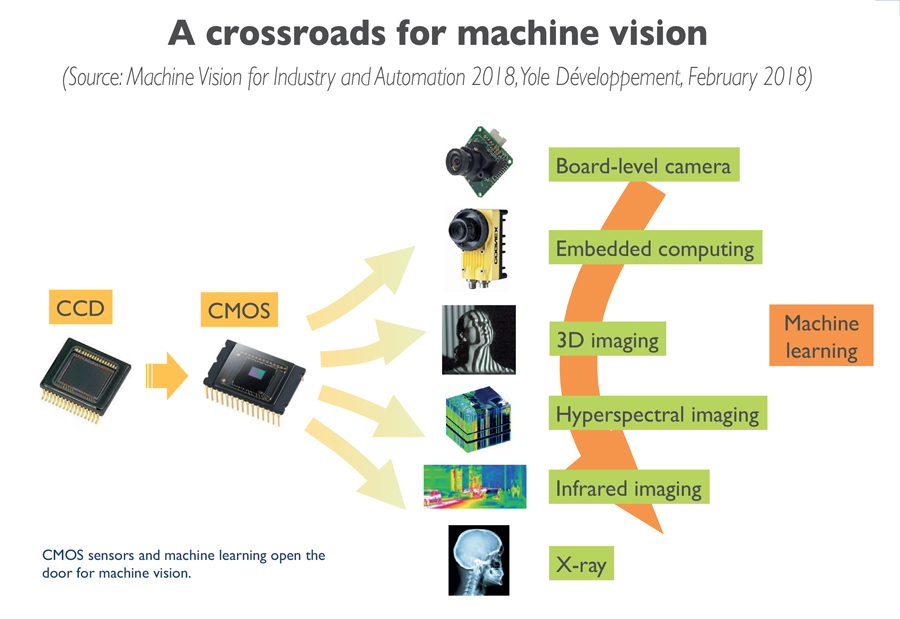