This report’s objectives are to:

WHY ARE ROBOTICS NEEDED IN THE MEDICAL FIELD, AND HOW IS MEDICAL ROBOTICS RESHAPING THE HEALTHCARE SYSTEM?

Robotics has a long, colorful history, but its applications have only recently impacted the healthcare industry. In 2000, the field’s current main player, Intuitive Surgical, was one of the first firms to bring a surgical robot to market. At the time, the company’s marketing was centered on remote surgical procedures. However, the ensuing years have seen the applications of this life-changing technology increase exponentially, to the point where the possibilities enabled by today’s medical robots are endless. Each “participant” sees added value in this technology: minimal invasiveness for the patient, enhanced microsurgery and precision capabilities for the surgeon, and cost optimization for the healthcare system due to patients’ shorter recovery time.

Another major component of medical robotics technology is rehabilitation robotics. Indeed, the 500,000 people affected by spinal cord injury (SCI) every year worldwide, along with stroke patients and neurodegenerative disease patients (among others) could greatly benefit from this technology. Powered exoskeletons, rehabilitation robots and orthotics, artificial limbs: the total accessible market is huge and the extraordinary benefits will enhance market penetration. 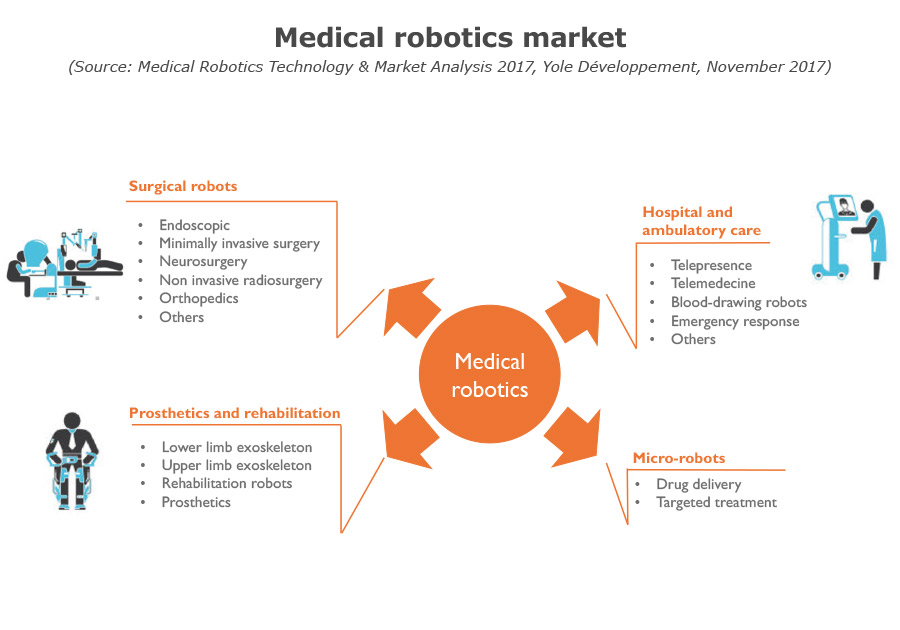 In light of recent advances in telemedicine, telepresence robots are the perfect tools for bringing medical expertise to the point of need while decreasing costs by allowing the patient to be treated at home. Telepresence robots can also be used to protect workers against infectious diseases by allowing caregivers to stay at a safe distance from infected patients.

The medical robotics market will experience an impressive 17% compound annual growth, from $3.7B in 2016 to $9.3B in 2022. This growth will be mainly driven by the surgical robots segment, which represents about 94% of the medical robotics market ($3.4B in 2016). However, due to a big difference in ASP, rehabilitation and prosthetics robots, along with hospital and ambulatory care robots, represented 87% in terms of units sold. 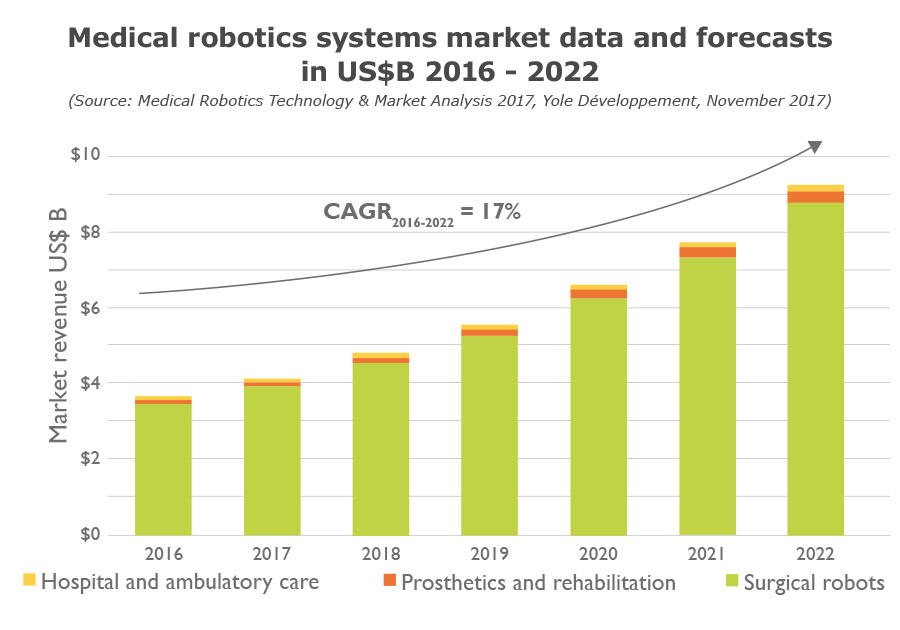 A ROBOT IS A MACHINE THAT SENSES, THINKS, AND ACTS: HOW ARE SENSORS KEY ENABLERS OF THIS TECHNOLOGY?

Numerous sensors are required for a robot to function and sense its environment: position and torque sensors for the articulations, gyroscopes and accelerometers for positioning and moving parts, pressure sensors, image sensors, surface electromyography and neuronal implants as a trigger signal for the exoskeleton, and many other sensor types. These sensors can be divided into two groups: 1) key enabler sensors, and 2) other sensors not specifically developed for medical robotics applications.

In the field of surgical robotics, surgeons want technology that allows them to “feel” the body’s tissue remotely, a process called “haptic sensing”, as well as better camera-image quality since the surgical robot functions as the surgeon’s hands and eyes. Both issues can be addressed using new sensor types: haptic sensors and high-resolution CCD or CMOS cameras.

Another trend, already observed in the endoscopy market, is the move towards disposable image sensors to achieve a disposable laparoscope. This trend is not yet visible in the surgical robots market, but it will probably surface in the future as regulations evolve towards more disposable scopes. This would completely change the number of cameras sold to surgical robot-makers, shifting from a single camera per robot to as many as one camera per surgery.

Yole Développement is uniquely positioned to provide your company with an understanding of the coming revolution in the sensors for medical robotics field. 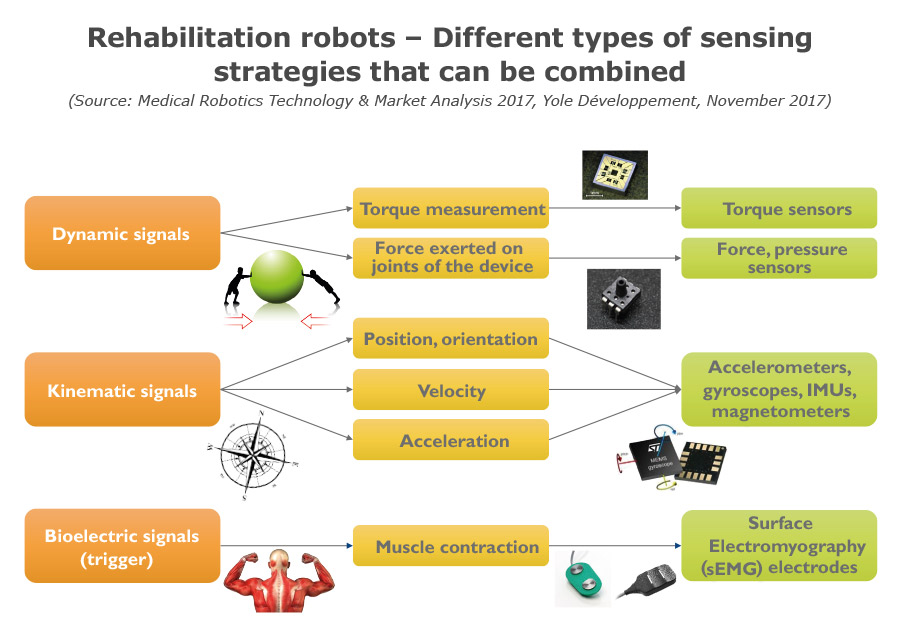 WHO IS DRIVING MEDICAL ROBOTICS’ GROWTH, AND WHO ARE THE NEWCOMERS?

For more than a decade, Intuitive Surgical has had a quasi-monopoly on the field of minimally invasive robotic surgery. But newcomers like Cambridge Medical Robotics and TransEnterix are now entering the market with new technologies. Also, in the last few years Medtronic has made two major moves into surgical robotics: its acquisition of Covidien for $50B, and its emergence as Mazor Robotics’ lead investor. Medtronic-Covidien owns an extensive patent portfolio in the surgical robotics field, and the company should be watched closely over the next few years since they are probably working on a new product.

Rehabilitation robotics and smart prosthetics are very dynamic fields, with established players like Hocoma leading the market along with many newcomers in the field of powered exoskeletons for upper and lower limbs. With the first exoskeletons (ReWalk Robotics, Ekso Bionics) now FDA-approved for certain conditions, the market is booming thanks to equipment leasing to rehabilitation centers and the emergence of personal-use systems. 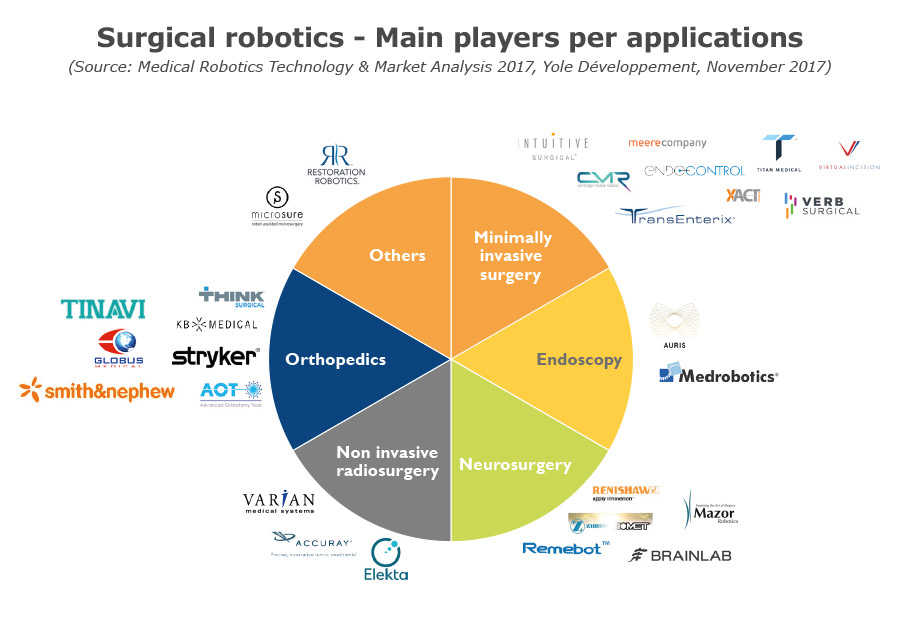