The 2021 Q3 Edition of the Microcontroller Market Monitor takes a deep dive into the evolution of the smartcard and secure MCU market. The largest Secure MCU application is the Subscriber Identity Module (SIM) that secures cell phone account information and transactions so users can be authenticated on their network and use its services securely. Historically, the user account information is assigned to a tiny card inserted in a cell phone, but that technology is changing. Increasingly, the subscriber information can be downloaded and secured on an embedded secure MCU (eSIM technology) or an integrated secure sub-system in the SoC (iSIM technology). All three technologies have their advantages and disadvantages, but what is clear is that the increase in cyber threats is driving very strong growth in embedded secure MCUs. This demand for security is not only driving the vertical market segment for dedicated secure MCUs but is also pushing security horizontally so that secure sub-systems are becoming a minimum requirement for a growing number of MCUs in other applications. Despite the smartcard market declining due to slowing growth in cell phones and the emergence of eSIM and iSIM technologies, embedded secure MCU applications are making up the losses and propelling the smartcard and secure MCU market toward $2.8 billion in 2026. 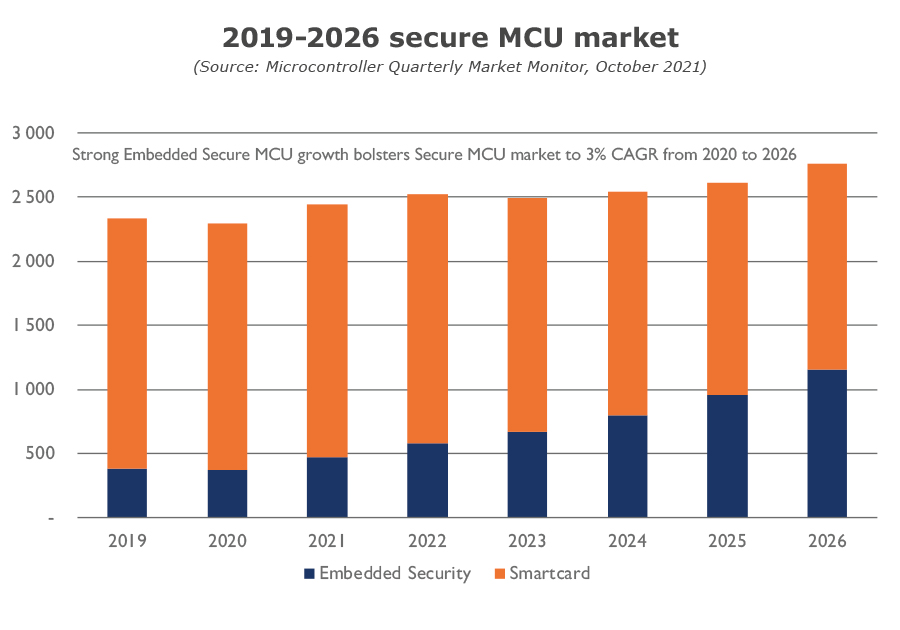 Amidst a supply chain disruption, growth in microcontrollers is expected to rebound after the initial impact of the global pandemic. The majority of microcontrollers are made on more mature processes and should recover some normalcy in the supply chain in 1-2 years, even though other component markets may take twice that long. Some MCU markets will see a surge in pentup demand as this occurs. Automotive, Industrial, Aerospace & Defense, and Medical are all expected to have a 9% or more revenue CAGR. Personal data processing, which saw a boom in stay-at-home office purchasing, will suffer a short-term cycle reset as much of the equipment demanding MCUs will now not need replacing for several years. This is the only one of ten markets analyzed to exhibit a short-term decline.

Geopolitical conflicts, natural disasters, flaws in just-in-time supply chain strategies, and misjudgment of the impact of the pandemic on the semiconductor market have created a severe supply chain imbalance. Early 2020 saw a severe downward trend in several markets, automotive being one of the most crucial. With this decline in demand, OEMs reacted quickly to reduce workforce, delay production, and, most importantly, cancel semiconductor orders. When demand in the automotive market rapidly rebounded, they found that they were unable to respond because fab capacity had been reallocated to markets like personal data processing. Now $50k automobiles are waiting for $5 parts as the disrupted supply chain takes time to rebalance. The MCU market suffers as much from impacted OEM demand as automobile production struggles to get other high-performance components. Even if MCU capacity is available, if a car can’t be built while waiting for a GPU or display driver, many common MCU orders will be left hanging as well. 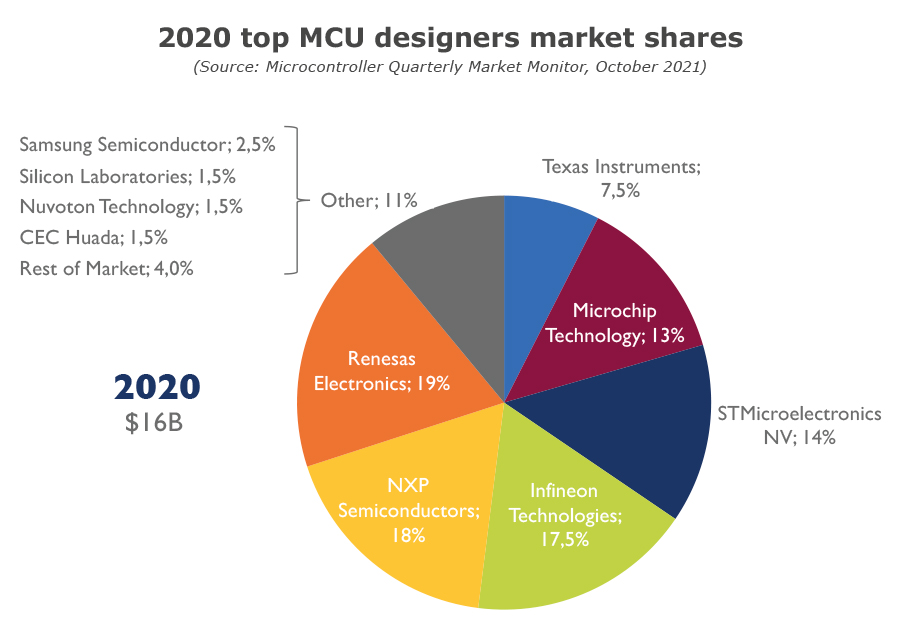 The Microcontroller market competitive landscape has evolved through numerous acquisitions. It is to the point that the top five microcontroller suppliers, collectively accounting for a significant share of the mergers and acquisitions over the last decade, now represent over 80% of the overall MCU market. All of these are Integrated Design Manufacturers. However, the market still includes numerous designers. At least 40 suppliers are each estimated to generate over $50 million in annual revenue. Since many microcontrollers are manufactured on mature processes, the market can sustain a large number, but for those vying for cuttingedge manufacturing technologies, only a few can produce at volumes that can sustain the large non-recurring expenditures of near cutting-edge manufacturing. 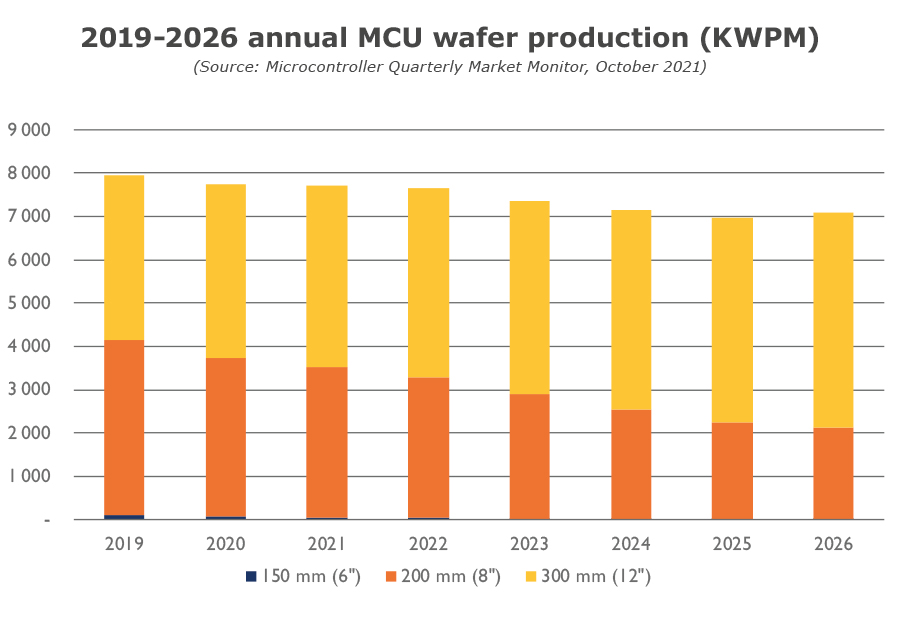 WAFER PRODUCTION DECLINING – NOT AS BAD AS IT SOUNDS

More so than the microprocessor and SoC markets, the MCU market is sensitive to growing cost, area, and power constraints. These push designers to carefully consider new features. While cost and the difficulty of scaling mixed signal and memory features have traditionally held back MCUs to several process geometries behind cutting-edge processors, the gap between classic MCUs and more advanced manufacturing is narrowing. At the same time, MCUs are moving from classic 8” to 12” wafers. This combination is expected to reduce the Kilo Wafers per Month production while manufacturing revenue and chip supply continue to rise.

AI – NOT JUST FOR CARS AND DATA CENTERS

GPUs and AI accelerators may be catching all the media attention with promises of more TOPS and FLOPS, but AI is not just scaling up, it is scaling down. TinyML and other AI frameworks will mean as many as 2.5 billion MCUs running AI by 2026. While large powerful processors continue to improve on vision processing, OEMs are discovering just how much machine learning can save in time and money, even with simple listening or sensing applications run on microcontrollers.