A Compound Annual Growth Rate (CAGR) of more than 100% is expected in microdisplay modules for emerging  applications, to reach a market value of $4.2B. That is of course if the use cases are found, and if the technologies can deliver on their promises.

For the past few years, augmented reality (AR) headsets have been a dream, with no credible alternative but to use microdisplays. We have seen a big microdisplay development effort for such applications in the consumer market, mainly for organic light emitting diodes on silicon (OLED-on-Si) and microLEDs. But in the meantime, liquid crystal on silicon (LCOS) and digital light processing (DLP) have the lion’s share. For major brands, AR would trigger the next consumer electronics revolution. But, at the end of the day, it remains a dream. There is still the need to find a compelling use case to convince the consumer, and device maker OEMs need to step up their game. With the 2023 target in mind, we shall expect better use case demonstrations over the next couple of years. Were that to happen, we expect the microdisplay module market for AR headsets would grow at a 110% CAGR until 2025, to reach $1.8B.

Meanwhile, another major trend in the automotive sector is autonomous driving and increased levels of autonomy. To that end, cars have ever more displays, while more safety is also required. Heads-up displays (HUDs) can help join both worlds. Traditional solutions are too limited for increased field of view (FOV) and display of information. New projection technologies are required, alongside innovative optical components, to be able to provide useful, convenient, and safe heads-up displays while occupying as little volume as possible in the car. The first of these modules has just been released in the newest Mercedes S-Class. As we are seeing the first models using a projection microdisplay, we expect the microdisplay module market for automotive HUDs to grow
at a 107% CAGR until 2025, to reach $285M. The endgame, be it for headsets or HUDs, is obviously true 3D displays. But this is a longer play as we do not expect that to reach significant volumes within five years at a reasonable level of performance. 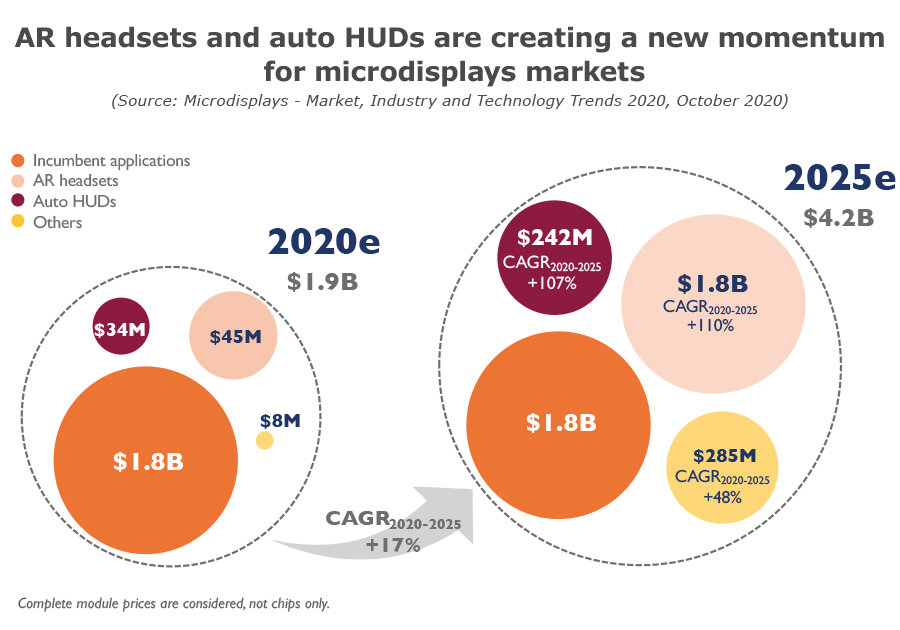 THE COMPETING TECHNOLOGIES ALL HAVE PROS AND CONS, BUT OLED-ON-SI AND MICROLEDS CAN BE GAME CHANGERS

These applications have harsh requirements for power consumption, efficiency, color reproduction, pixel size and so on. On top of that, both LCOS and DLP for headsets suffer from bulkiness due to the fact they are not selfemissive. If some holographic players can work alongside LCOS and DLP manufacturers to replace their optics, it could reduce the volumes these modules occupy. Were that to happen, the gap would close with microLEDs, and it would lead to drastic supply chain changes in the AR headsets market.

OLED-on-Si is self-emissive, so it is much better for addressing sleek form factors. However, this technology suffers too much for its lack of brightness. Several paths have been addressed to improve upon and try to reach the levels of incumbent technologies. One is direct patterning like eMagin does. Another is multi-stacking, like OLEDWorks does. We see RGB levels reaching 10,000 nits, which is starting to be enough for AR and pending additional improvements, the gap could be closed. MicroLED microdisplays could disrupt everything and be the de facto go-to technology of choice, whatever the application, by delivering on every single technical parameter required. MicroLED microdisplays’ biggest challenges today are twofold. They must provide a full RGB panel. They must also manufacture a cost-effective solution that can deliver on all the promises at a proper yield. These newer technologies will bring supply chain disruptions that can enable the rise of newer applications, pending they live up to their claims, or the markets will not emerge.

An interesting aspect in all these technologies is the fact that they all require a silicon CMOS backplane for driving. Some players are trying to provide an efficient solution that can serve as a driver, while being frontplane agnostic. As the key to technological development also lies in how this is handled, we believe that there could be ‘one wafer to rule them all’. If a player were to be able to provide a solution compatible with any given frontplane technology, it could be a game changer for the industry. Some are already capitalizing on their knowledge, switching from one frontplane to the other, like Jasper Display or Compound Photonics. Will we see something even more generic in the future? 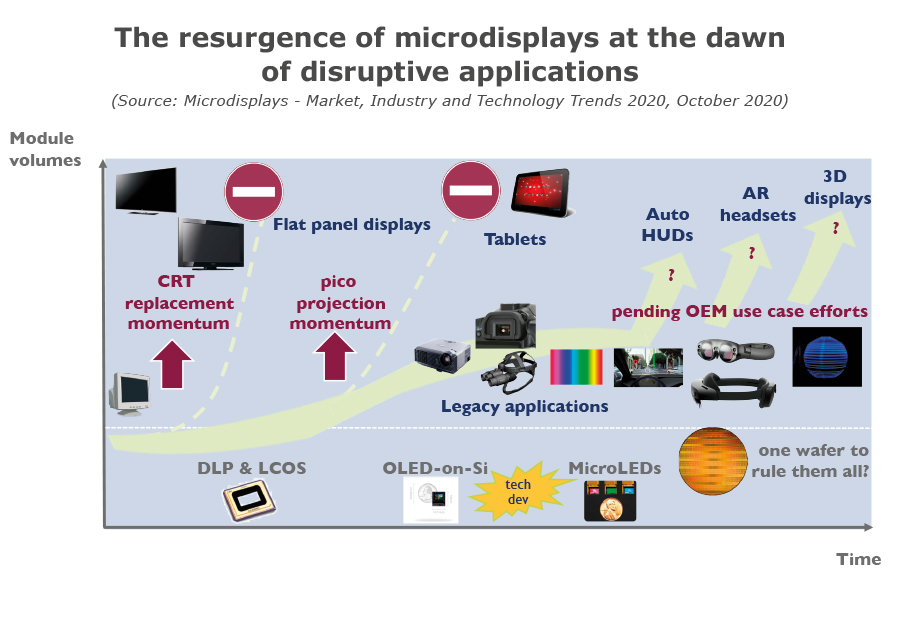 FROM THE SMALL START-UPS TO THE BIGGER OEMS, A WIDE DIVERSITY OF PLAYERS IS INVOLVED

The stakes are significant for the new applications – AR headsets and automotive HUDs. The money looks unlimited as the differentiation it would bring would be tremendous. But to reach this differentiation, very strong innovations over the next few years are required. Hence funding and partnerships, pushing the industrial players to position themselves on technological choices to deliver proper products. Since the OEMs are occupying a very large presence in the global supply chains already and trying to be the first to strike, we can observe a wide diversity of companies gravitating around them to try and score a win.
Each player invests in start-ups that provide either components or systems like Google, or sign exclusivity deals and partnerships like Facebook.

Whatever the technology, development is mostly handled by start-ups and established players looking for new applications to further drive their revenues. And these applications require more than microdisplays. We see newer technology building blocks being developed, such as holographic optical elements for headsets or HUDs as demonstrated by Digilens, Ceres or others, or driving solutions. The industry is like a galaxy of established component makers and innovative players trying to revolve around the OEMs. And the brand battle behind these innovative applications is fierce. Mercedes has been the first with the automotive HUD. Who will be the first for real AR headsets, Apple, Facebook, Google or Huawei? We shall see by 2023. 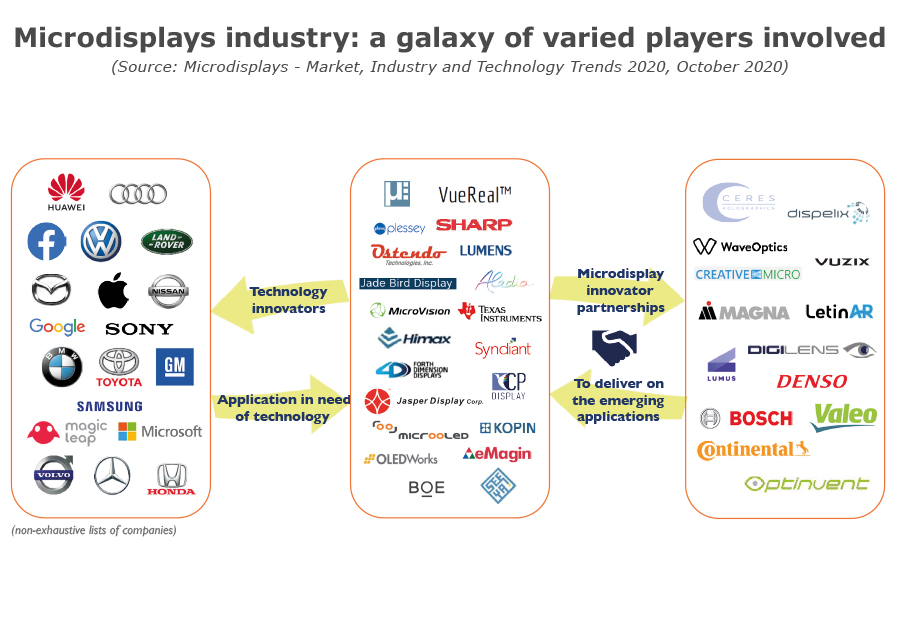