MicroLED intellectual property activity is growing exponentially both in terms of patents and topics. BOE has overtaken Apple, and China and traditional display makers are now in the lead.

Sensors and others in display components and functions 345

This new Yole Développement (Yole) report identifies close to 5,500 patents representing about 2,500 families filed by more than 350 different organizations. The level of activity is growing exponentially, with 40% of the patents filed in 2019 alone!

The growth is fueled by the meteoric rise of Chinese companies. This mirrors a more general trend in the country as it transitions from a manufacturing to an innovation-driven economy. This also reflects the situation in the display industry where Chinese companies now hold close to 50% of the worldwide display capacity in 2020.

Many of these microLED patents are questionable but established players shouldn’t underestimate their Chinese competitors. Some patents show world-class innovation and demonstrate a strong resolve to close the gap with established rivals. In addition, in high volumes, even low quality patents can be used as bargaining tools to fend off infringement lawsuits and negotiate cross licensing agreements. The proliferation of subpar patents may however hinder innovation as it increases barriers to entry.
Increasing resources are required to conduct freedom-to-operate analysis, monitor patent activities, try to invalidate wrongly granted patents, and respond to infringement lawsuits.

Companies are jumping on the microLED bandwagon for fear of being left out. Display makers dominated IP activity in 2019. Most were initially dismissive of microLEDs but all are now accelerating their effort. BOE now leads in volume with close to 150 new patent families in 2019 alone. LG, AUO, Samsung, CSOT, Tianma, Innolux, CEC Panda, Visionox and Foxconn group companies all dramatically increased activity as well. Korean companies are investing massively in OLED but microLED are a credible alternative for high end TVs. Chinese makers are behind on OLED, so microLED could be a differentiating play. For companies that haven’t invested in OLED, microLED could be critical for survival and allow them to remain relevant in various high-end market segments without requiring OLED-like multi-billion dollar capital expenditure.

Many companies now have broad portfolios. Licensing and legal battles will likely arise if microLED displays enter volume manufacturing. Except for microdisplays, where the capex-intensive steps can be outsourced, startups and small companies are not planning to become display makers. Rather, most will focus on their core expertise and attempt to license their technology to established display makers and OEMs. 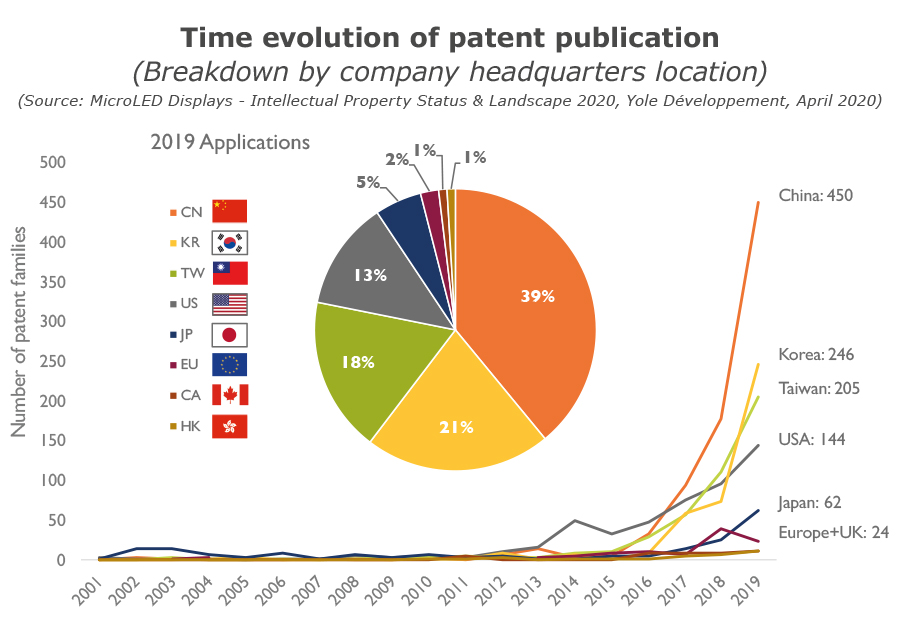 The overall level of creativity and the diversity of approaches being deployed to address microLED displays technology and manufacturing roadblocks is impressive and keeps increasing.

More than 20 companies have now presented microLED display prototypes but more effort is needed to reach the quality and manufacturability required for consumer displays. As confidence increases that the mass transfer and chip efficiency conundrums could be resolved, the effort is accelerating on topics previously seen as “second order” issues. These include light extraction and shaping, driving, display designs as well as solutions to increase manufacturability, yield and reduce cost. Efficient yield management and repair strategies are as critical as mass transfer to enable microLED displays. Yet, efforts in those areas are still limited. In many cases however, companies are advancing on the topic but not filing IP in order to protect trade secrets. 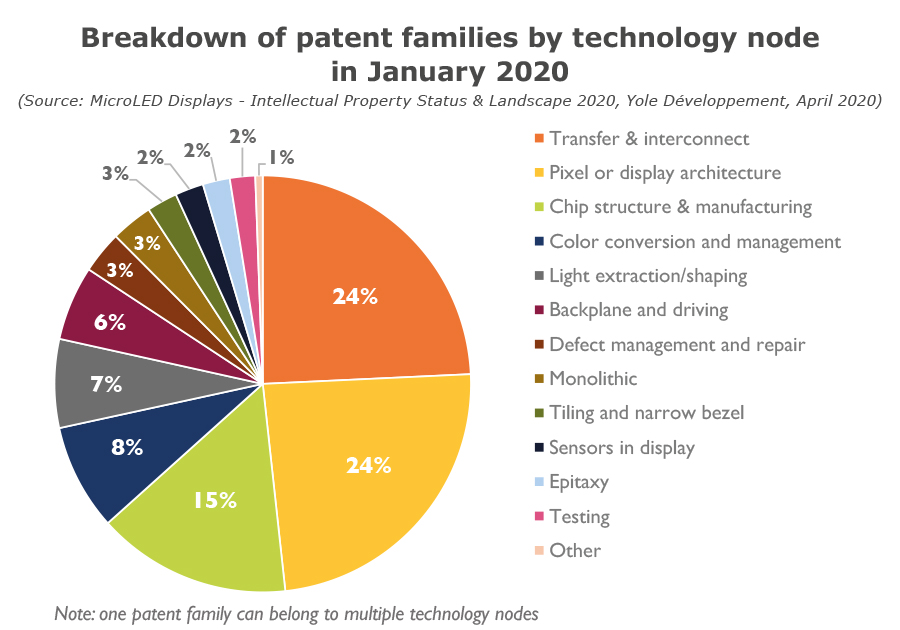 In order to compete with LG’s white OLED and maintain its leadership in the high-end TV market segment, Samsung Display Co. (SDC), announced a $11b investment to develop and manufacture Quantum Dot (QD)-OLED by 2021-2022. But Samsung is  edging its bets. At CES, its Visual Display group showed impressive 75” to 150” microLED TV prototypes built using in-house mass transfer and chips developed by Playnitride. SDC however has a separate microLED development track: since 2016, it has focused its effort on nanorod microLED, referred to as “QNED”, initially developed by PSI Co., and Kookmin University. QNED can be assembled by fluidic self-assembly with inkjet printing tools. The technology would therefore be largely compatible with the manufacturing infrastructure deployed for QD-OLED while solving one of its major issue, the low efficiency of blue OLED emitters. QNED could blend microLED into more established display technologies.

“Historical” players such as X-Celeprint, or, more recently, Playnitride also remain very active. They have developed broad portfolios covering a wide range of microLED technology nodes. Glo and VueReal have also more than quadrupled the size of the portfolio since 2018. Activity has accelerated at Facebook after it acquired mLED and InfiniLED. Its recent exclusive licensing and manufacturing deal with Plessey confirms its ambitions for augmented reality applications. IP filing at Sony has stalled despite the commercialization of its microLED based Public Information Display. More surprisingly, activity at Apple has also slowed down significantly since 2017. The few patents it has since published however show the high level of maturity and advancement reached by the company in microLED display technologies. Apple has also expanded the scope of its effort into developing microdisplays for augmented reality. Overall, the reduced activity could also be a sign of confidence in an already robust microLED portfolio as the company now focuses on executing and setting up its supply chain. If successful, Apple would be the first to disrupt the industry by having developed its own display technology and establishing a mostly fabless supply chain model, something that Huawei could be willing to emulate. 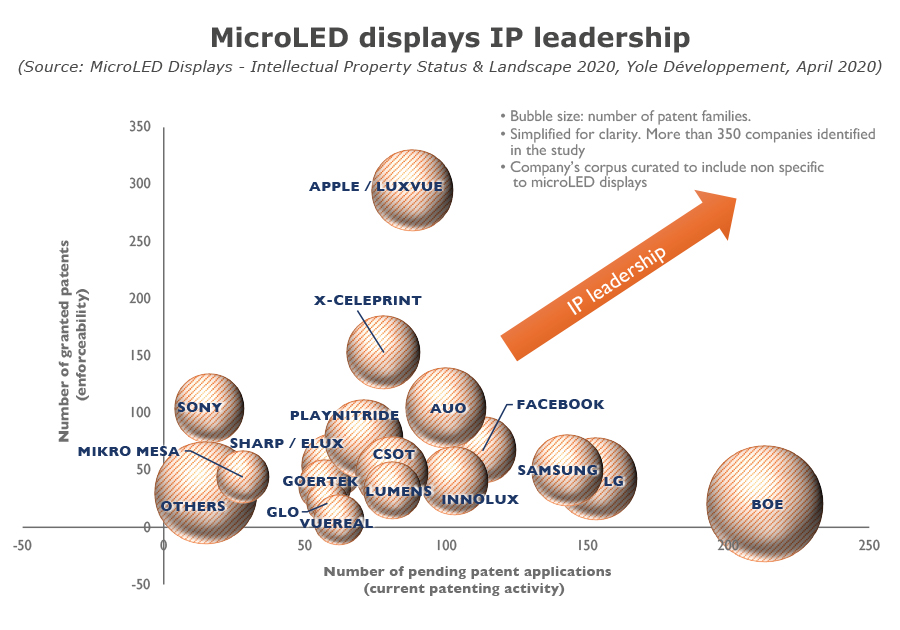