To enable a thorough understanding of the value chain, infrastructure, and players for the microphone, MEMS microspeaker and audio IC market:

Today, audio technologies are becoming ubiquitous, reminiscent of the hi-fi boom in the 1960s and 1970s. Audio is the new must-have interface to interact with phones, speakers, cars, and even homes. Audio is also bringing new immersive experiences with Active Noise Cancellation (ANC), 3D audio, but also sound transparency to better connect with reality.
Considering the market for MEMS microphones, microspeakers, audio codecs and amplifiers for consumer systems, as well as Application Processor Units (APUs) and Systems-on-Chips (SoCs) for audio-centric end-systems like smart speakers, True Wireless Stereo (TWS) earbuds, and audio headsets, we expect market growth from $15.3B in 2020 to $21.4B in 2026 with a Compound Annual Growth Rate (CAGR) of 5.8%.
The highest market growth rate concerns dedicated APUs and SoCs for audio-centric end-systems. The market is expected to have a 13.3% CAGR between 2020 and 2026, from $1.8B in 2020 to $3.9B in 2026. MEMS microphones are the components with the second highest growth rate between 2020 and 2026. This market is expected to have a 10.5% CAGR between 2020 and 2026, from $1.4B to $2.5B. This growth can be mainly attributed to an increasing attachment rate of microphones in most end-systems, enabling a multitude of functionalities and enhancing the audio experience.
This comprehensive report covers market volume and value, for MEMS microphones, microspeakers, and audio ICs, including audio codecs, audio amplifiers and dedicated APUs and SoCs. 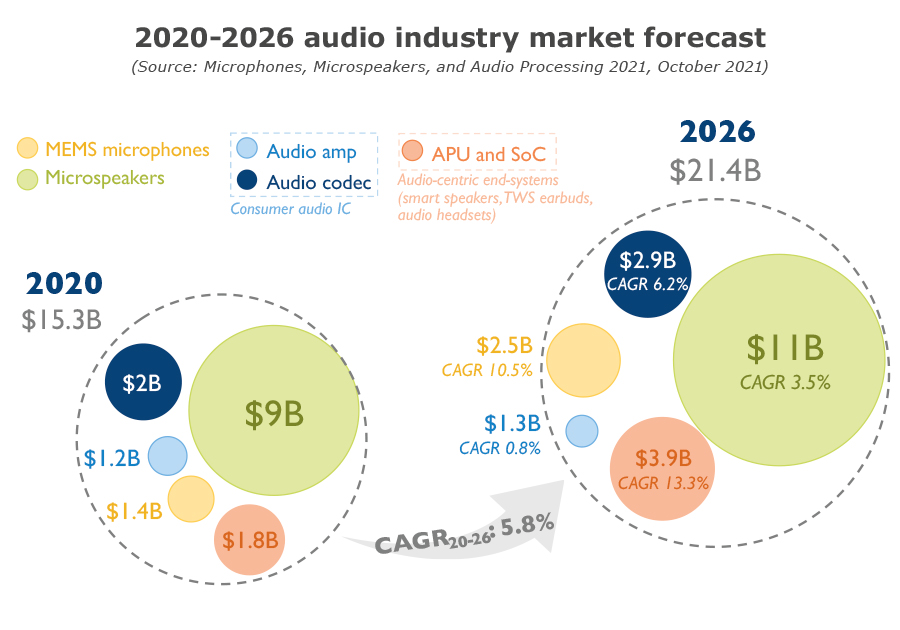 Inspired by the science fiction TV series Star Trek, Amazon Alexa was first released in 2014 and marks the beginning of a ubiquitous voice human-machine interface era. First dedicated to smart speakers, the technology has rapidly expanded to smartphones. The technology is now going further into smart TVs, smart homes, Augmented Reality (AR) and Virtual Reality (VR) headsets, cars, and wearables, including smartwatches, earbuds, and headsets.
Among all these systems, TWS earbuds are experiencing a particular boom, both in volume and technologies. From a sub-million market in 2015, the TWS earbud market is expected to reach 859 million units in 2026, getting closer to smartphone volumes each year, which are expected to be 1.4 billion units in 2026. The market offers a wide range of price points, from $10 from QCY T1C to more than $200 from Apple. These tiny devices are packed with lots of tech and components, reaching up to six microphones per pair of earbuds, dedicated audio codec chips, and highly audio capable SoCs. And as the ear canal is not getting any larger, this means that space management is one of the highest priorities for TWS end-system manufacturers. Miniaturization of components is also of paramount importance for the device/sensor makers.
Microphones and other audio components are also making their way into cars in several applications. One of these applications is voice interaction like in other systems. While voice interaction is particularly useful because the driver has both hands busy operating the vehicle, the noisy environment of the car must also be considered. Another increasingly important application of automotive audio is Road Active Noise Cancelling (RANC). By using active noise control, the noise in the car can be actively reduced. As well as improving the comfort of passengers, the technology also allows car makers to remove sound absorbing and vibration dampening materials. This reduces the car’s total weight and improves fuel efficiency or maximum range.
The report presents a complete trend analysis for the audio applications for consumer, automotive, industrial, medical, and defense markets. 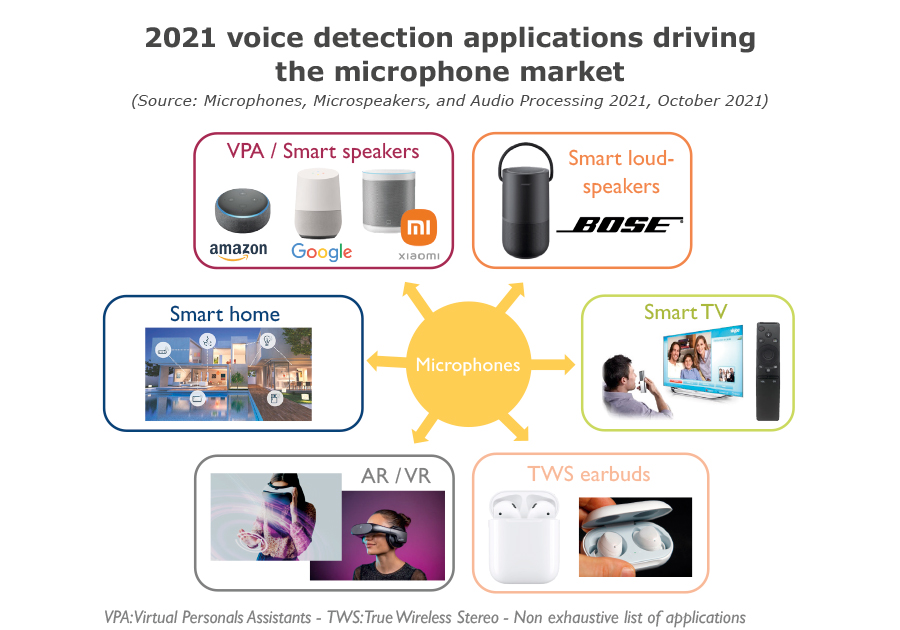 Although stagnant five years ago, the MEMS microphone industry is witnessing an effervescent period again. After MEMS microphones diffused widely into smartphones, it seemed like there was room for only three dominating players: Knowles, Goertek, and AAC. However, 2020 and 2021 have seen several changes. First, Goermicro has taken the market share lead, albeit by a small percentage. Also, several companies have emerged, including MEMSensing, Zilltek and Partron. In 2021 Goermicro filed for an Initial Public Offering (IPO) in China, after its spin-off as a stand-alone entity from Goertek. MEMSensing has already gone public with an IPO since the second half of 2020. Chinese companies seem particularly active in the MEMS microphone industry. They are boosted by government incentives to create a robust domestic microelectronics supply chain, including MEMS manufacturing. They are also helped by the fact that they can raise money by the Chinese NASDAQ equivalent, the STAR market.
The MEMS microspeaker industry, while still in its infancy, is also developing interestingly. Started by Audio Pixels 15 years ago, the industry continued its development in 2014 with the creation of USound. More recent newcomers include xMEMS, created in 2017, Sonic Edge, created in 2019, and Arioso Systems, created in 2020. MEMS microspeakers still needs to find their sweet spot but are being used across more audio MEMS applications. A couple of years back it was believed that smartphones would be a good entry point for MEMS microspeakers. Currently the entry point for almost every startup is the TWS market. The closed, in-ear design seems to provide a perfect spot for an efficient air displacement, good sound pressure level and decent acoustic performance overall.
Besides components, the audio industry is also most active in softer or more general aspects. Microsoft acquired Nuance, which specializes in conversational artificial intelligence (AI) for $20B. Sonova acquired Sennheiser’s consumer business for $240M and Baidu’s AI voice assistant Xiaodu closed a funding round, reaching a $5B valuation. With the convergence of analog audio, digital audio, software and cloud technologies, the audio industry is witnessing a ubiquitous revolution.
The report presents a comprehensive overview of the audio supply chain for MEMS microphones, microspeakers, and audio IC. 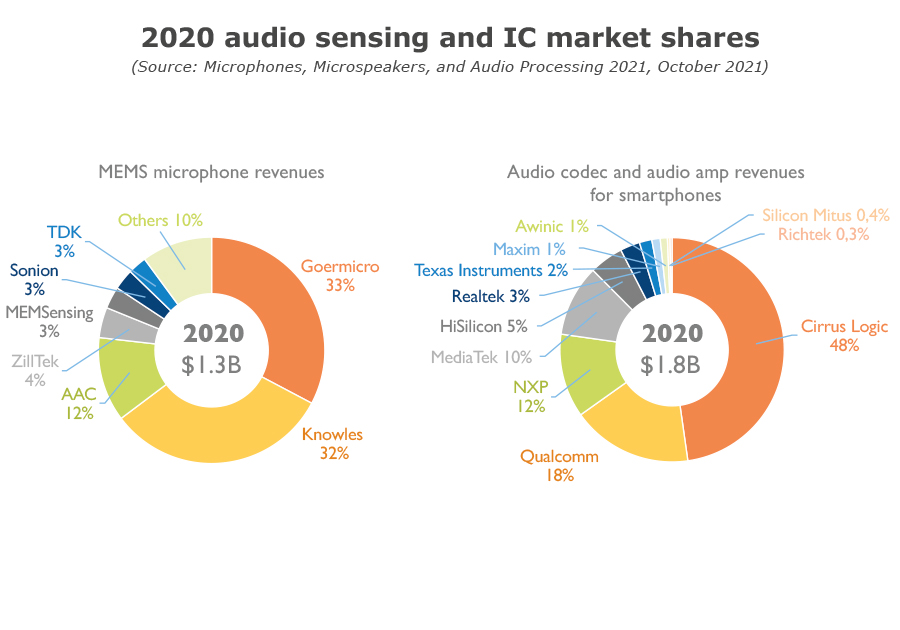