The voice-based world is shaking up the audio industry, making it worth $20.8B in 2024.

To enable a thorough understanding of the value chain, infrastructure and players for the microphone, microspeaker and audio IC market:

Companies cited in this report 11

The Voice is not only an international reality television singing competition which started in 2010. It is at the heart of new audio industry applications. The audio industry has seen numerous evolutionary stages. The 1960s saw the advent of hi-fi and stereo music, and popular groups like Pink Floyd. The 1980s saw the advent of digital music, where clarity of sound has characterized other popular bands, like Dire Straits. However at the end of the 1990s and beginning of the 2000s the popularization of mobile phones led to technical progress in voice processing. At the beginning of the 2010s, voice-based Virtual Personal Assistants (VPAs) such as Siri by Apple, Alexa by Amazon, and Google Assistant by Google, appeared.

Voice-based VPA proliferation is the main driver for the audio industry today. An interesting feature of this new application is that it spreads through various systems. VPAs are in smartphones, smart speakers, smart watches, wireless earbuds, cars, smart TVs and their remote controllers; even trash cans with voice recognition have appeared. This application is based on traditional components of audio systems: microphones, speakers, audio codecs, and audio amplifiers. But it also relies on new components related to computing and analyzing voice data, fueled by the emergence of consumer-level Artificial Intelligence (AI). All these systems and technologies are covered in this report. 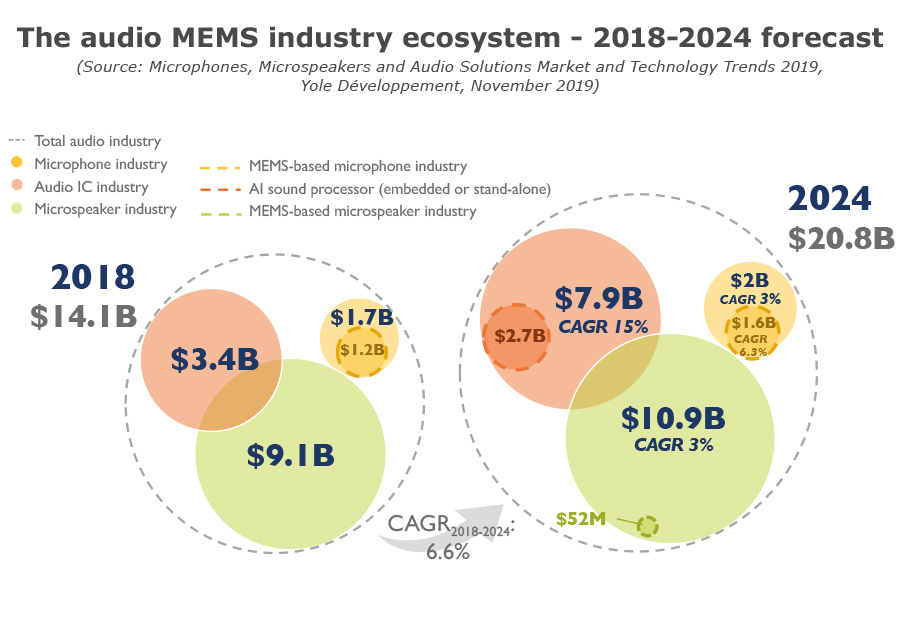 Part of the growth of the audio industry relies on the value brought by AI. More precisely, AI technology enables the VPA application to spread into smart speakers, wireless earbuds, and smart watches among others, and sustains the growth of all audio components. AI enables two key functions for audio: Computing and analyzing. Computing enables complex audio functions such as source localization and speech recognition, and is performed either on the cloud or at the edge, in consumer devices. Analyzing consists of even more complex operations such as big data analysis for marketing, and is performed in the cloud.

The usage of AI in audio is a huge opportunity for business, since it pushes audio components into new systems. It is also an opportunity for humans, allowing them to talk and give hands-free commands to a VPA in their smart speakers while cooking or in their wireless earbuds while jogging.
It could also save lives if it becomes a standard for automotive human machine interfaces. However, these always-listening systems could be a threat
to this new audio business. The global surveillance disclosures made by Edward Snowden in 2013 have shown how these new technologies could lead to
massive surveillance societies.

Nevertheless, there is a battle in the ‘audio chain’ over which component to put these new AI functions into. Analyzing, which requires heavy processing power and access to lots of data, is expected to remain in the cloud. AI processing, such as for speech recognition, today happens mainly in the cloud. However, it is expected to reach the edge were the application processor (AP) possesses more computing power, and will allow lower latency and more privacy. In high end models, dedicated codec and amplifier chips for audio are expected to remain, since they require careful analog design and manufacturing.

WHO IS EATING THE AUDIO PIE?

How is this market shared among the different players? For MEMS microphones, Knowles and Goertek are the main players, with 39% and 28% of this $1.2B market in 2018 respectively. Knowles’ revenues might have saturated in recent years, however it’s still holding its ground in an expanding market against Chinese players who offer lower cost solutions. Furthermore, Infineon traditionally supplied the microphone die to players such as Goertek and AAC, but seems to be changing its strategy and has started offering complete MEMS microphones.

For audio codecs and amplifiers, Cirrus Logic, Qualcomm, and Texas Instruments are the main players in a $3.4B market in 2018 with shares of 35%, 18%, and 12% respectively. Cirrus Logic is the clear market leader but is dependent on Apple.

In the future, AI processing will probably spread among players. AP makers like Apple, Qualcomm, and HiSilicon will integrate AI processing. Knowles and Goertek are proposing dedicated audio chips integrating AI capabilities along with codecs and digital signal processing functions. On the other side, IP providers like CEVA and Xperi are working towards chip designs for AI processing. No matter the approach, AI is attracting all the attention.

Finally, ever expanding use-cases are generating a wealth of new data that are fueling AI, giving much more functionality. And what’s better than one’s own voice to control these devices seamlessly? That’s the next battleground for the audio players across the whole supply chain: the voice arena.

Companies cited in the report