MiniLED prosumer applications are on their way – and industrial direct-view LED displays are strengthening their development.

MINILED VS. MICROLED – WHY THE CONFUSION?

MicroLEDs have drawn an increasing amount of attention since Apple acquired Luxvue in 2014. Apple has spent $1.5-$2B over the last five years in this area. Panel makers such as Samsung, LG, AUO or Innolux have also significantly increased their efforts. Startups have raised more than $800M to date, including at least $100M in 2019. Patent filings are growing exponentially and technology is progressing on all fronts.

Amidst this flurry of MicroLED news and activity, a new term also emerged in early 2017: MiniLED. The technology is often described as a stepping stone, bridging the technology and application gap between traditional LEDs and MicroLEDs. However, there is no commonly accepted definition of either term. As the names suggest, size is a critical aspect. Building on a consensus from the many companies surveyed through Yole Développement coverage of both topics, MicroLEDs are usually considered to be below 50μm along their sides while, by default, MiniLEDs fill the size gap between MicroLEDs and traditional LEDs. In practice, MiniLEDs are better distinguished from MicroLEDs by a combination of size, application, architecture and manufacturing infrastructure. MicroLEDs require major technology breakthroughs and disruptions in assembly and die structure, as well as a significant overhaul of the manufacturing infrastructure. MiniLED chips only require incremental evolution of standard LED chips with very similar architectures and can be manufactured in the same fabs with only minor upgrades. 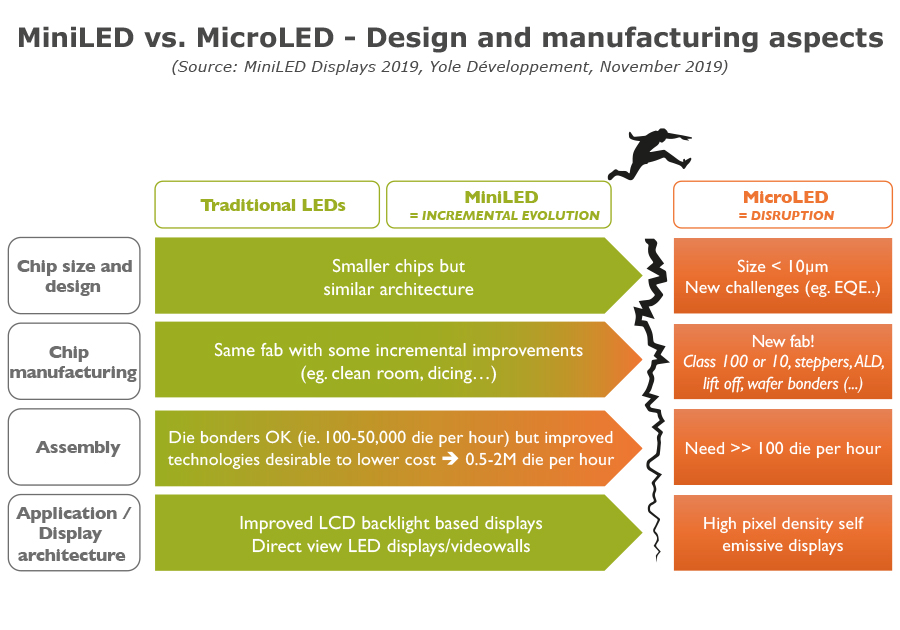 For LCD backlights, MiniLEDs are a way to narrow the gap with OLEDs, delivering higher brightness and better control of local black levels compared to standard LCD panels. While not as perfect as OLEDs’ pixel-level dimming, MiniLED LCDs definitely narrow the gap as shown by the many prototypes presented by a wide variety of display makers. Yole Développement estimates that MiniLED benefits stand out mostly in three major applications: TVs, monitors and automotive displays.

TVs are the most promising market volume opportunity, and are likely to drive MiniLED shipments. The technology could help LCDs bridge the gap and regain market share against OLEDs in the high-end, large size, most profitable segments. This opportunity is all the more enticing to panel and display makers which haven’t yet invested in OLED technologies. They see the potential to extend their existing LCD fabs’ and technologies’ lifetimes, and boost their profitability. Significant adoption is however not expected until the industry further reduces chip sizes and develops more efficient assembly processes in order to reduce cost. Reducing chip sizes also involves changes in the BLU design and a possible transition from printed circuit boards to glass as a substrate.

For high-end monitors where OLEDs have yet to overcome challenges in terms of availability and lifetime, MiniLED LCDs could deliver excellent contrast and high brightness at lower cost.

Tablets are also an opportunity for MiniLEDs. Apple is expected to adopt the technology in its next iPad Pro. This would send favorable signals to the market and competition, empower the supply chain’s equipment development and availability, and possibly enable faster adoption in other applications.

Automotive is also a very promising application. MiniLEDs could deliver a very desirable combination of high brightness and high contrast with the wellestablished and rugged LCD technologies that automakers have learned to trust and rely upon. This could deliver a unique value proposition and shorten qualification times compared to less wellproven OLEDs, whose lifetime and reliability for this demanding application are ongoing concerns for automakers.

There is still a question mark regarding another high volume application: smartphones. Here, MiniLEDs are facing a strong incumbent in OLEDs, whose cost-to-performance ratio has already promoted them into a dominant position in high-end and flagship segments. OLED performance keeps improving and cost keeps decreasing, thanks to higher yield and excess capacity resulting from the large number of new suppliers setting up new flexible OLED display fabs in China. Yole Développement therefore estimates that there are scant opportunities for MiniLEDs in smartphones.

For direct view LED displays, MiniLEDs used in conjunction with Chip On Board (COB) architecture could enable higher penetration of NPP LED displays in multiple applications, hence increasing the serviceable market. Die size could evolve continuously toward smaller dimensions, possibly down to 30-50μm, in order to reduce cost. Adoption in cinema is still limited but even modest adoption rates would generate very significant upsides.

Last but not least, MiniLEDs are also making their way into lighting applications. In this field, advanced automotive front lighting systems such as smart headlamps could represent a real upside for MiniLEDs in the mid-to-long term. 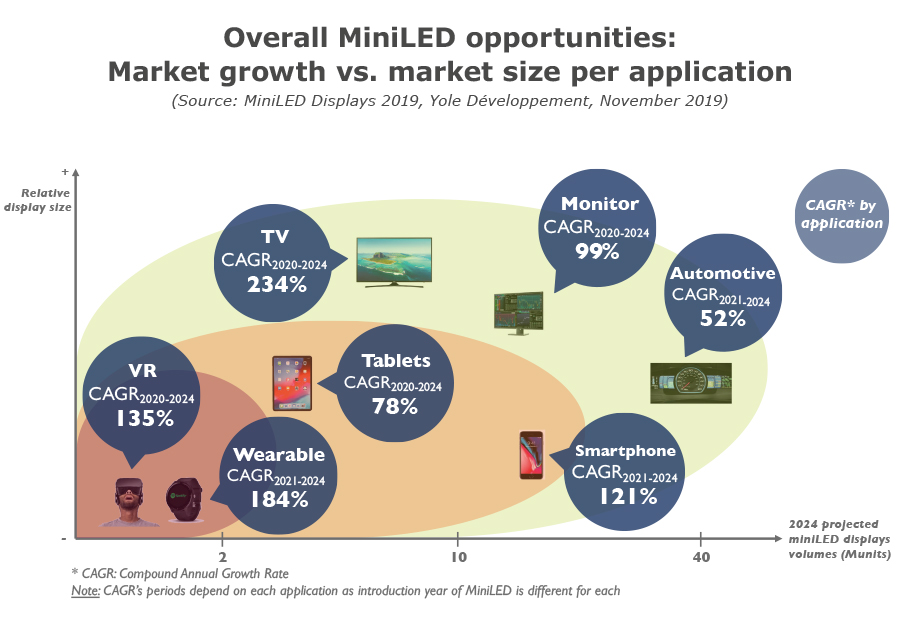 NOT ALL PLAYERS WIN WITH MINILEDS

Over the last few years, an unprecedented variety of display technologies has emerged, including OLEDs, quantum dots, dual cell LCDs, and MicroLEDs. They all seek to better deliver the new advanced features required to stimulate demand and pricing in various display end-markets. This poses a challenge for panel makers, as multiplying technology development paths can be costly. However, one key benefit of MiniLEDs is that they leverage proven technologies, allowing minimal capital expenditure and faster development timelines.

For Taiwanese display makers, MiniLEDs are a strategic defensive opportunity. They haven’t invested in OLEDs. Meanwhile, their position in LCD panel manufacturing is challenged by rapidlyincreasing Chinese capacity, which is pushing prices downward. MiniLEDs are an opportunity for differentiation and increased added value. But Chinese makers are also working on MiniLEDs among multiple other technologies such as White OLEDs (WOLEDs), inkjet printed OLED and electroluminescent quantum dots.

Korean companies appear to be mostly moving out of LCDs and focusing all investment on OLEDs. However, for the time being, LG still needs to generate cash from its LCD operation to fund its WOLED ramp up and MiniLEDs could present an opportunity to increase added value from its LCD products.

Upstream in the supply chain, MiniLEDs should benefit chip and BLU/module/panel players and allow some to move up the value chain. As MiniLED applications are mostly constructed in COB processes, there is a risk that LED packagers may be squeezed out of the supply chain. The most exposed are reacting by either moving up the supply chain or by developing new innovative packages or modules that could allow them to remain relevant and even to surf the MiniLED wave.

In this context, while we don’t expect MiniLEDs to be a major and disruptive game-changer in the display industry, it is an alluring incremental innovation and presents potentially appealing opportunities for some LCD players to narrow the gap with OLEDs. It is also a means to enable higher penetration of NPP displays for direct view LED display players. 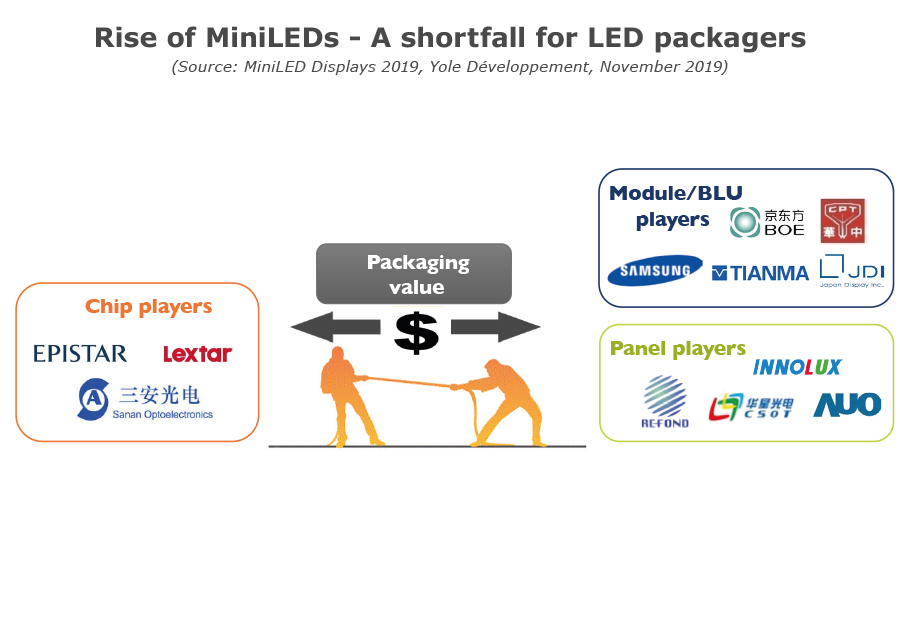