Facing huge hurdles in data bandwidth and computational efficiencies, computing and sensing must reinvent themselves by mimicking neurobiological architectures.

THOUGH ARTIFICIAL INTELLIGENCE (AI) IS THRIVING, THE CURRENT PARADIGM’S LIMITS ARE SPARKING ALTERNATIVES

Since 2012, deep learning techniques have proven their superiority in the AI space. These techniques have spurred a giant leap in performance, and have been widely adopted by the industry. Recently, we have witnessed a race for development of new chips specialized for deep-learning training and inference, either for high-performance computing, servers, or edge applications. These chips use the existing semiconductor paradigm based on Moore’s Law. And while it is technically possible to manufacture chips capable of performing hundreds of Tera operations per second (Tops) to serve today’s AI application space, the desired computing power is still well below expectations. Consequently, an arms race is ongoing, centering on the use of ‘’brute force computing” to address computing power requirements. The technology node currently used is already at 7nm, and full wafer chips have emerged. Room for improvement appears small, and the economics associated with Moore’s Law paradigm is creating uncertainties.

Current deep-learning techniques and associated hardware face three main hurdles: first, the economics of Moore’s Law make it very difficult for a start-up to compete in the AI space and therefore is limiting competition. Second, data overflow makes current memory technologies a limiting factor. And third, the exponential increase in computing power requirements has created a “heat wall” for each application. Meanwhile, the market is demanding more performance for real-time speech recognition and translation, real-time video understanding, and real-time perception for robots and cars, and there are hundreds of other applications asking for more intelligence that combines sensing and computing.

Given these significant hurdles, the time is ripe for disruption: a new technology paradigm in which start-ups can differentiate themselves, and which could utilize the benefits derived from emerging memory technologies and drastically improve data, bandwidth, and power efficiencies. Many foresee this new paradigm to be the neuromorphic approach, some would call it the event-based approach where computation happens only if needed instead of being done at each clock step. This method allows a tremendous energy saving essential to run these greedy and intensive AI algorithms. This is the probable next step in AI technology.

This report represents a window into a possible future where AI uses neuromorphic approaches for sensing and computing.

NUMEROUS PLAYERS, FROM TECHNOLOGY GIANTS TO START-UPS, ARE ALREADY ACTIVE IN THE NEUROMORPHIC SPACE

Neural networks are several decades’ old, biologically-inspired algorithms serving AI. In recent years they have been implemented in silicon. The whole body of knowledge surrounding neural networks should not be confused with the neuromorphic trend, only the most “bio-mimicking type” – i.e. neural networks that are asynchronous, and use spikes and thresholds – are defined as truly “neuromorphic”.  With this description in mind, the neuromorphic trend really started in the 1980s with a U.S. scientist named Carver Meads at Caltech. Most of the early developments occurred in computing involving IBM, and later INTEL. A pivotal start-up company for neuromorphic IP is General Vision, which today licences many players and also develop its own chips. Two other start-ups (Brainchip and aiCTX) are notable for bringing neuromorphic chips to the consumer market, and several other start-ups are working in this space but in relative “stealth mode”:  Grai Matter Lab, Anotherbrain, Vicarious, and Robosensing.

Neuromorphic computing efforts also come from memory players like SK Hynix, Micron, and Western Digital – in fact, early partnerships with logic players are phasing out in favour of the shorter-term strategies that dominate investments from large memory makers. Nevertheless, many memory start-ups, including Knowm, Weebit, Memry, and Symetrix, are combining innovative non-volatile memory (NVM) technology with neuromorphic computing chip designs. However, because these firms’ approach is often based on a new concept called ‘’memristor’’ (a combination of memory and transistor), they are perceived as more long-term projects compared to the efforts from pure-play computing companies.

Besides computing, an accompanying start-up scene for neuromorphic image sensors has emerged, with its roots in an invention from Dr. Mahowald in the 1990s. ETH Zurich has been the center for innovation, spreading the technology across Europe and birthing start-ups like Prophesee, Insightness, Inivation, and Celepixel, operating alongside the efforts of larger players like Samsung. 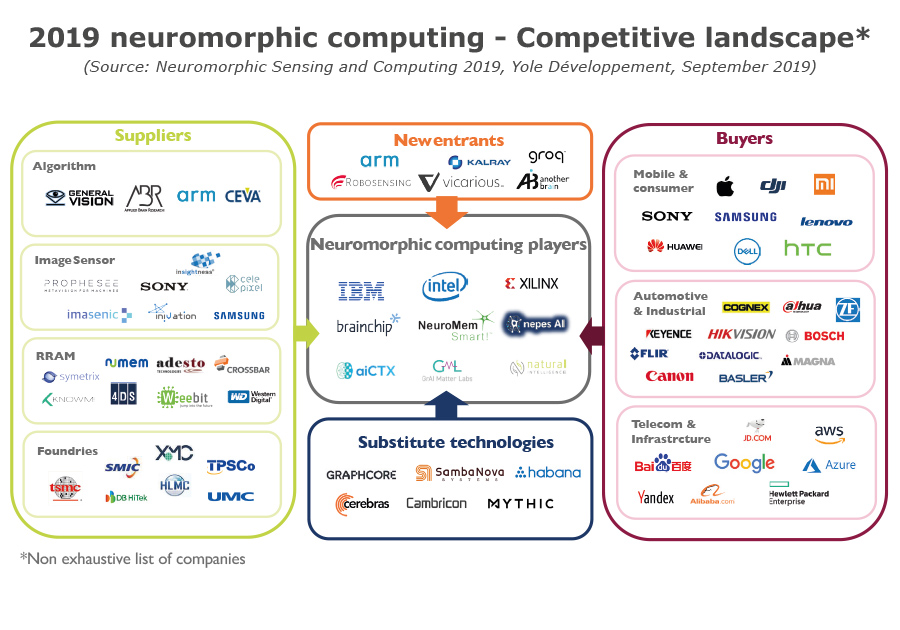 “BEACHHEAD MARKETS” SHOULD MATERIALIZE WITHIN THE NEXT FEW YEARS

Today, the neuromorphic approach still occupies the ‘‘curio cabinet”. Many are prophesying the advent of neuromorphic approaches in the same way deep learning techniques were wrongfully dismissed – until they ended up reigning. Many similarities point to the idea that such a paradigm shift could happen quickly. Several years ago, the biggest obstacle preventing the Deep Neural Network (DNN) approach from performing its best was the lack of suitable hardware to support DNN’s innovative software advances. Today, the same is true for neuromorphic technology – but as the first spiking neural network (SNN) chips roll out, the first beachhead markets are ready to fuel growth. The initial markets are industrial and mobile, mainly for robotic revolution and real-time perception. Within the next decade, the availability of hybrid in-memory computing chips should unlock the automotive market, which is desperate for a mass-market autonomous driving (AD) technology. Neuromorphic sensing and computing could be the magic bullet for these markets, solving most of AI’s current issues while opening new perspectives in the decades to come. 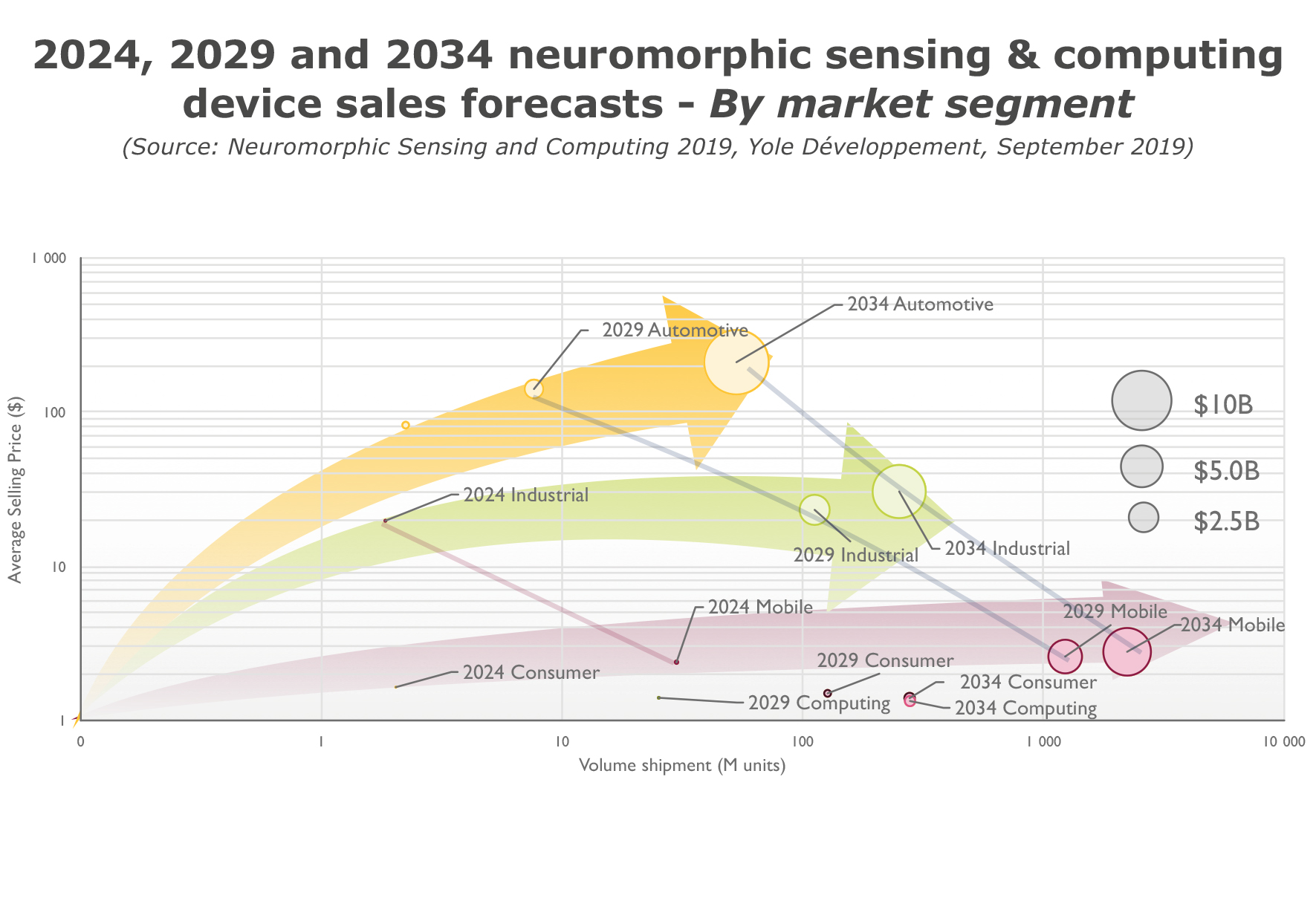