Are 3D displays getting a new chance to reach the market?

Companies cited in the report 12

The 3D display industry does not have many players but it is becoming better structured. We are at a time when virtual reality (VR) is well-recognized by the consumer market. Augmented reality (AR) has seen some hiccups and is now mainly targeting industrial markets. Hence, the next hyped display technology, 3D, has arrived with many promises. But the challenge is addressing all physical and psychological cues corresponding to the human vision system and how it sees objects.

For several decades now, the military has financed many projects on 3D displays. It is of utmost interest to be able to see every angle, as if being there, battlefield digitizations on table top displays. But it can do other things, like visualizing 3D satellite data. Medicine also benefits greatly from visualizing 3D data. For example, imaging the human body with magnetic resonance imaging (MRI) or computed tomography (CT) gives 2D slices. It is possible to rebuild that into a 3D model and display it in 3D to make better use of data.

The recent trend of having 3D data at one’s disposal, or almost, thanks to 3D sensing in particular, gives the 3D display industry new ideas. If one has a set of 3D data, one might as well display it. That is why we have seen great traction coming from the automotive industry over the past few months for in-cockpit 3D displays, either heads-up or regular. In recent examples, Continental partnered with and invested in Leia, Volkswagen did the same with SeeReal, while Bosch and Hella invested in Light Field Labs. This follows the trends for advanced driver assistance systems for autonomous vehicles, and trying to find new ways to alert drivers.

We also have seen some plans and even trials in consumer markets by a few companies, the most famous being Leia with the Red Hydrogen One smartphone during summer 2018. But the traction is not great, mostly because of associated technical challenges and consumers looking for perfect display solutions.

The report gives an overview of the applications and the way different companies interact with one another. 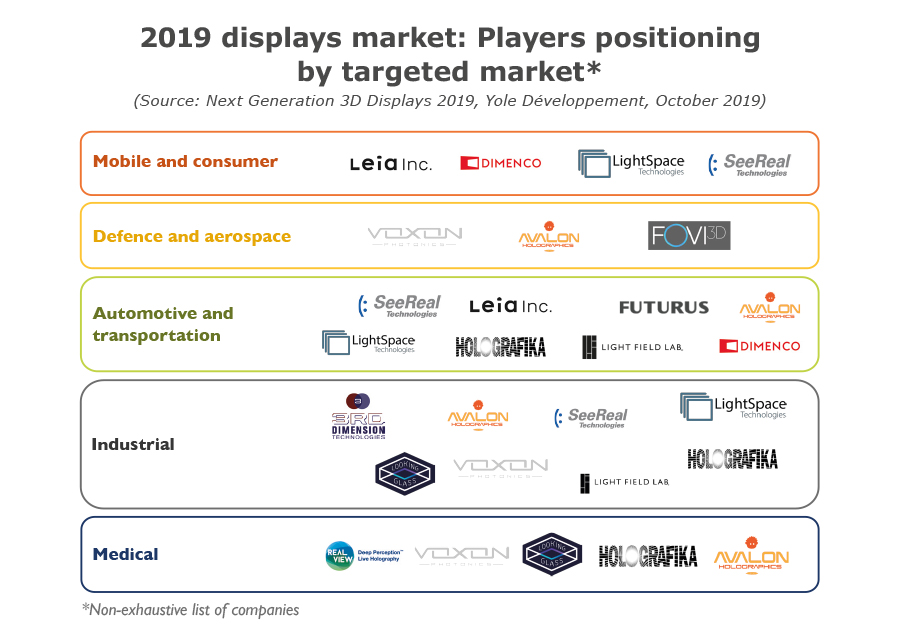 THE DEFINITION OF A 3D DISPLAY IS NOT TRIVIAL

There is a lot of confusion in the industry and media about what is and what is not an authentic 3D display. It should all be about a way to see the world as human eyes and brains have been built and work. It needs to be a carbon copy of regular visual sensations a viewer daily enjoys in real life. So it is all about providing proper depth cues.

The multiview display, sometimes called lightfield display, is a display that provides different views and is based on regular display technology with optical elements on top. It approximates the continuous light field function with a finite number of views distributed, generally with a horizontal parallax, over a given field of view for multi-user viewing.

In contrast to multiview displays, volumetric displays can provide images in true 3D space allowing, by nature, a multi-user application. But brightness and resolution are limited. A large number of volumetric display technologies, with around 15 different techniques, have been developed by universities. But it remains at a research level and few companies have emerged from these efforts.

Holographic display, or more generally the digital hologram display or computer generated holography, is a display technology that provides images through interference of coherent light waves through a spatial light modulator, typically a liquid crystal on silicon micro-display. This creates a 3D image that matches all human cues. This is the holy grail of 3D displays.

The report tries to clarify the situation with simple but detailed explanations. 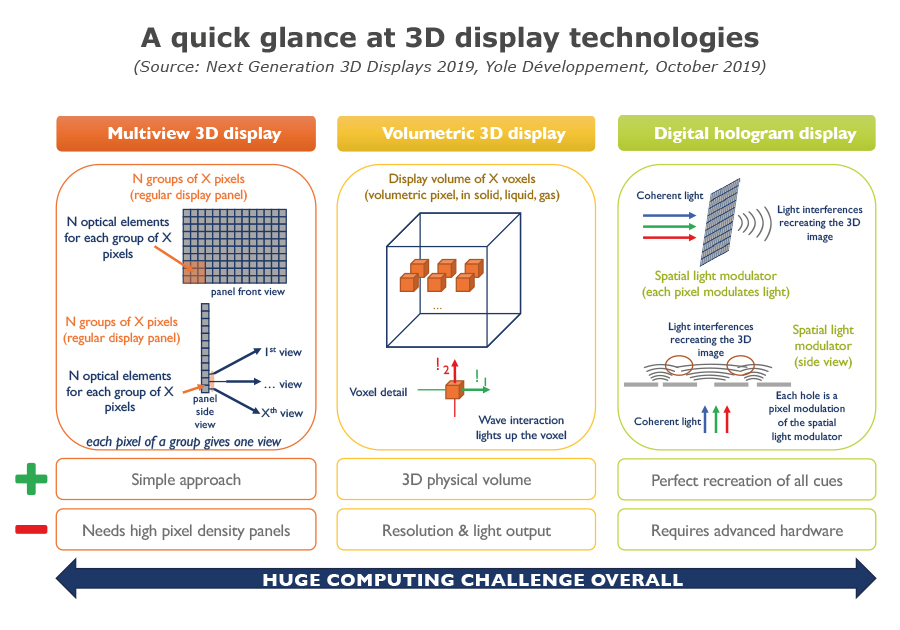 There are many technical challenges to overcome to deliver on what is expected. One that is hard to pass by is the required computing power. The recent uptake in 3D display comes from a Moore’s law-type of improvement of the global supply chain. Pixel size has diminished, display resolution has increased, and manufacturability of optics and micro-optics has been increased tremendously. But first and foremost, the increase in available computing power has allowed for better and better prototypes, and even the first products.

Computing is one of the major challenges across the entire 3D display landscape.
But efforts have been focused on identifying and discussing the display and optical elements existing or in development. Important topics include spatial light modulators, lasers, diffractive optical elements and associated wafer level optics, and the trend toward 8K panels.

Now, depending on the kind of displays developed and the technical challenges addressed, players are tending to closely focus on one specific segment. 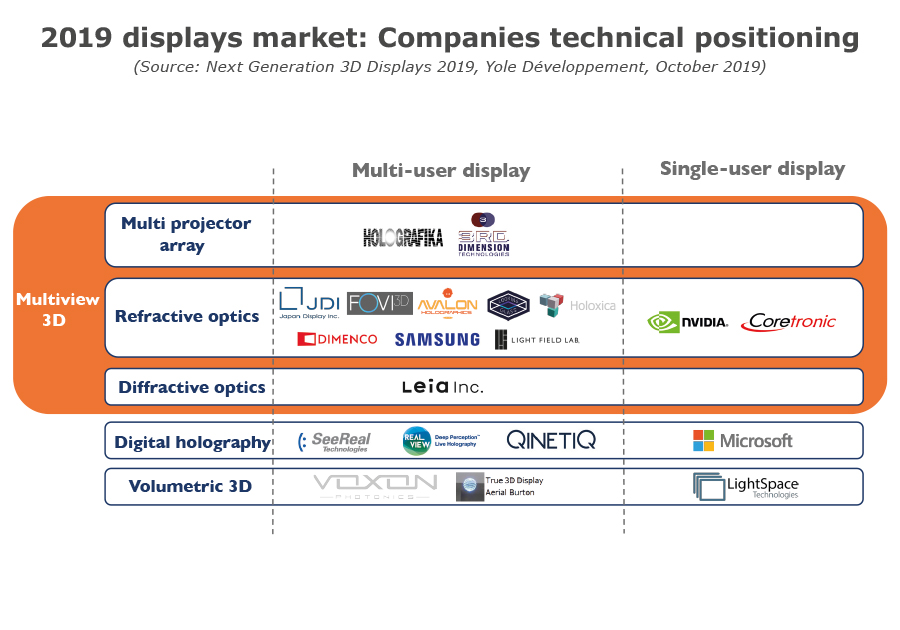