The display point of view 48

Since the beginning of the smartphone era, we have observed a continuously-improving trend regarding screen-to-body ratio increase. This is true for any display one can think of: not just smartphones, but also televisions, laptops, smartwatches, etc. And the trend persists, so much so that new display technologies have been developed in order to facilitate the increase.

In parallel, since the beginning of the internet of things (IoT) age, billions of connected displaybased devices are interacting with one another and acquiring even more sensors and actuators to help them interact with the world, and human beings. Since humans’ way of receiving information depends primarily on visual cues, it makes perfect sense to maximize a device’s screen-to-body ratio.

To ensure this ratio is maximized to its fullest, human machine interaction (HMI)-based sensors and actuators must be integrated underneath or on top of the display, within the panel stack. Today, some are, but arguably the most important sensors – front-side cameras that have completely changed the way people interact – are way too big and complex to be integrated simply. This prompts panel makers to cut their devices with “punchholes” or “notches” that are not UI-friendly nor design savvy.

The question then becomes: can panel makers directly integrate some functions in their panels – and if so, will the supply chain be disrupted because of value absorption by these panel makers? Furthermore, how are these HMIs accomplished today, is there a trend for them to be easily integrated, and when?

This report presents a review of the trends in today’s sensors and actuators and the players involved (and their supply chains), and analyzes the  possibility ofintegration directly under or in the display. 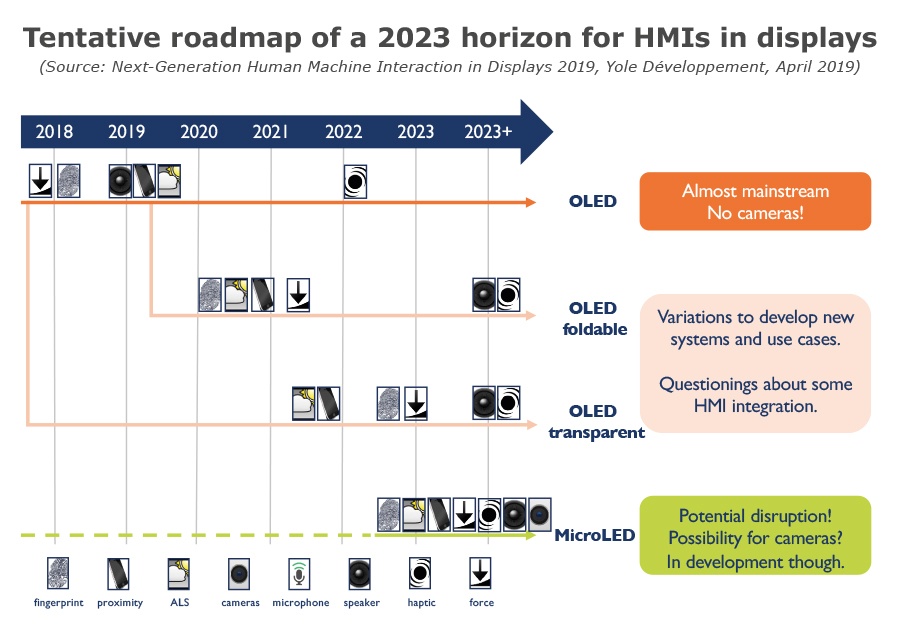 MODIFYING DISPLAY PANEL MANUFACTURING FOR HMI INTEGRATION IS NOT COMMONPLACE

Actually, when talking about display integration, the focus is likely on OLED panels since they are the ones offering the most flexibility in terms of sensor and actuator integration because they are thinner, do not require backlight units, etc. However, their manufacturing process is long and complex.

Another limiting factor is that for fabs which cost several billions of dollars, with several tens of steps to follow in order to produce a display panel, a single change in the process flow could drastically diminish the overall yield. And as the current environment is one of overproduction, price competition, and even growing fab capacity, this is not something desirable to panel makers.

Panel makers are hence reluctant to embrace the idea of “intelligent backplanes”, and though some are pursuing R&D efforts to try and integrate sensing functions in backplanes, the majority of panel makers and their associated OEMS are working towards the idea of integrating sensors under or on top of their displays, rather than inside the displays. So most HMIs will remain, under the condition that they can fight against the harsher conditions of being under the display.

As for front-side cameras, given their size and sheer complexity there does not seem to be a possibility in the next few years to make them disappear – unless they are put into slide-up or pop-up mechanisms as can already be seen, but which raise questions concerning reliability.

This report presents a detailed analysis of display requirements, with a comprehensive overview of display structures and manufacturing, as well as HMIs, and through a thorough presentation of current and potential future solutions analyzes what can/cannot be done for their integration in the display. 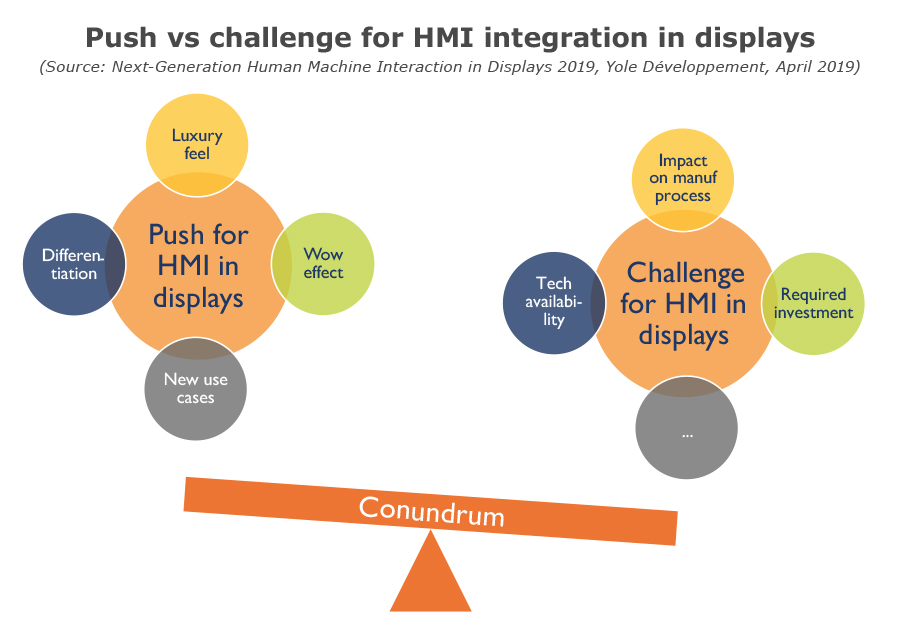 The challenge of backplane integration will likely not be accepted by panel makers due to the way displays are made today. Now, is there a display technology that would allow for a way to circumvent this panel manufacturing issue, avoiding TFTs? MicroLED displays, being right around the corner, could be an opportunity. In fact, the excitement around MicroLED displays is real, even more so since Apple bought Luxvue in 2014.

However, the challenge exists in how to assemble these panels. The assembly process appears to be one of critical steps that would allow the MicroLED display opportunity to materialize. Today, dozens of processes are being developed for microLED assembly. For each, multiple assembly strategies can be envisioned, i.e. small stamps, large stamps, interposers, etc. The spread in terms of the number of transfer cycles, for example, could be staggering. For instance, we can describe assembly strategies for TVs with more than a 200-fold spread in terms of the number of operations required.

But if the opportunity materializes, it could be a game-changer because, due to the low pixel fill-factor the microLED chips would exhibit per pixel, a tremendous space would exist for possible front-plane intelligent integration, and the possibility to add sensors for example. This may be the next big thing in terms of HMIs directly integrated in displays, even though the trend taken by OLED panel-user OEMs may seem good enough for everything, even if the most difficult sensors to integrate (i.e. camera modules) could be left aside.

This report offers an overview of microLED displays and discusses the challenges keeping them from disrupting the field, especially in terms of front-plane integration. This report also presents a comprehensive overview of optical structures, current challenges, and key research directions. 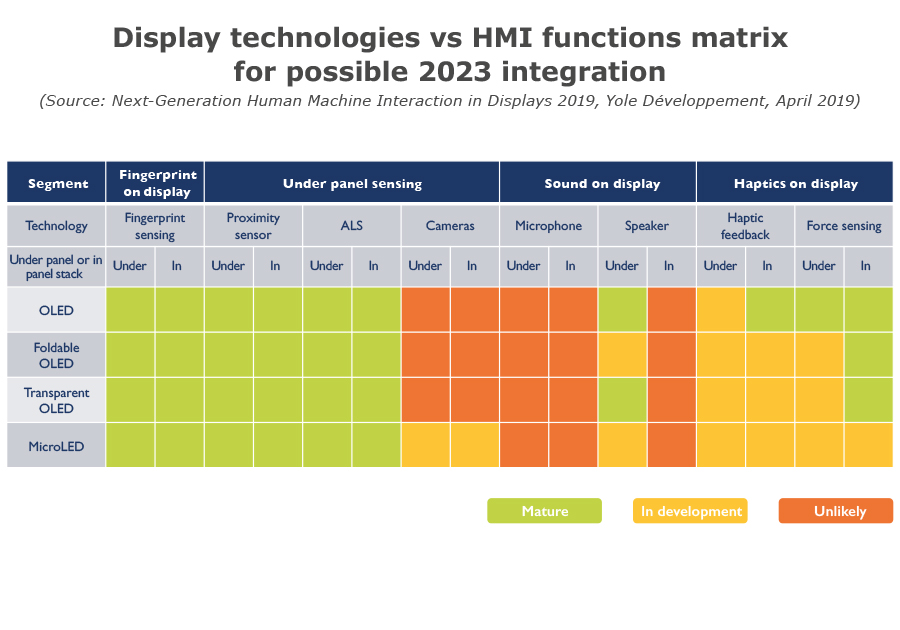