How strongly will piezoelectric’s good vibrations resonate in the device market?

Provide an overview of piezo devices and related applications:

FROM BULK TO THIN-FILM PIEZO DEVICES – A MOMENTUM-BUILDING TRANSITION!

This is definitely a bright period for piezoelectric devices! Telecommunication and 5G’s imminent arrival, personal assistants, consumer wearables, fingerprint and medical devices are all candidates for using the piezo effect. Since the beginning of the 20th century, when quartz was a material of choice for sonar in military applications, piezoelectricity has evolved into several usage types with a diversity of applications. Today, piezoelectric properties offer great opportunities to be used in three device types: sensor, actuator, and transducer.

Bulk piezo devices are made of a structured piece of quartz or ceramic and are integrated in products ranging from very common to highend. On the other side, advanced materials and techniques have only been developed since the early 2000s, i.e. those which use semiconductor processes to meet the twin challenges of miniaturization and high integration required for mobile phones, consumer products, and inkjet printheads. Thin-film piezoelectric deposition techniques are gaining increasing importance within the MEMS industry, with different materials being used (i.e. lead zirconate titanate (PZT) and aluminium nitride (AlN)) – each with particular specifications that differentiate their performance as more suitable for sensors or actuators. For example, Epson completed construction of its new MEMS printhead factory in order to triple production of its PrecisionCore printheads: a full MEMS printhead using a thin-film PZT deposition process.

While several devices have begun transitioning from bulk to thin-film piezo materials, the specific use-case still influences the choice of bulk or thin-film types. Piezoelectric micromachined ultrasound transducers (PMUT) are a perfect example of the transition from bulk to thin-film piezo method, and PMUT devices have recently been well-publicized for fingerprint and gesture recognition applications. Another promising sector is medical imaging, in which bulk and thinfilm- based devices (for imaging probes) will coexist depending on the usage and performance required. Considering advancements for bulk piezo materials, TDK recently unveiled speakers with a thickness of 0.45mm – 0.7mm, demonstrating another approach for obtaining the thinnestpossible layer from bulk piezo material. Overall, it’s important to understand that transition is not competition: thin-film and bulk methods are two complementary approaches.

Yole Développement’s report describes this transition and the most promising applications, from microspeakers to MEMS autofocus, through Film Bulk Acoustic Resonator (FBAR) , complete with a status report and product availability roadmap. Also included is a deep dive into the performance associated with usage in sensors, actuators, and transducers, describing the market trends and technology choices. 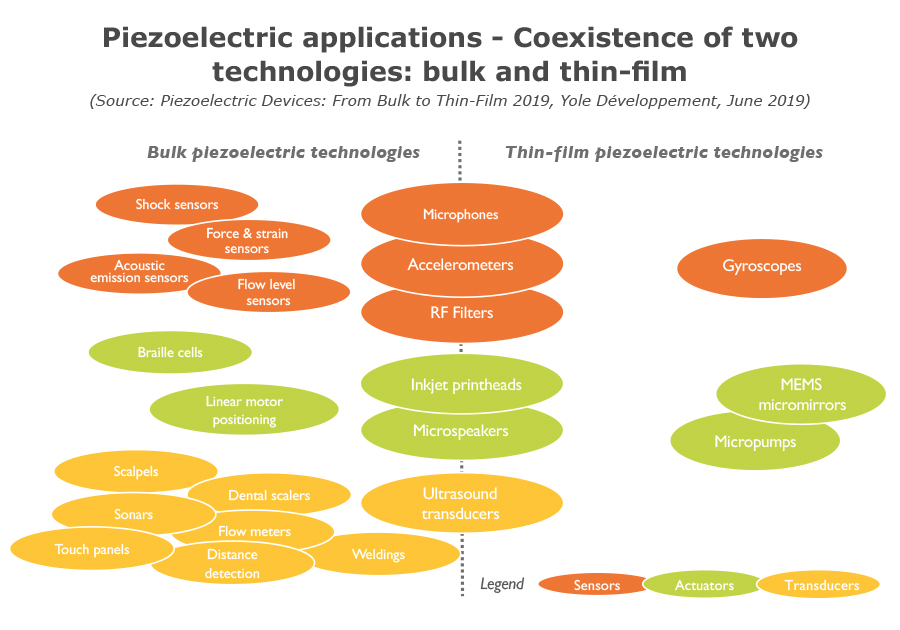 A $48.5B MARKET OPPORTUNITY FOR BULK AND THIN-FILM PIEZO DEVICES

The piezoelectric market for sensors, actuators, and transducers is expected to reach $48.5B in 2024, with a 12.2% CAGR from 2018 – 2024 on comparable devices. Thin-film piezo-based devices are driving the piezoelectric market’s growth, though market share is still in favour of bulk-based devices, which remains a strong technology in the piezo market. In both the bulk and thin-film device markets, RF filters lead with surface acoustic waves (SAW) and bulk acoustic waves (BAW), respectively. Broadcom and Qorvo are the major thin-film players in the RF filters arena, with 5G as well as an increasing number of frequencies are strongly boosting the market.

The recent fundraising efforts of consumer players like Amazon in thin-film-based companies to support the development of piezo microspeakers and MEMS piezo microphones confirm mainstream interest in technologies that are able to work with ultra-low power. Bulk piezo devices offer the high actuation performance that is expected in a number of applications, from inkjet printheads to linear motors achieving very precise movements.

This report forecasts the growth of bulk and thinfilm piezo devices over the next five years, illustrating the trends and dynamics of these two methods, with a market focus on thin-film-based devices, by application. 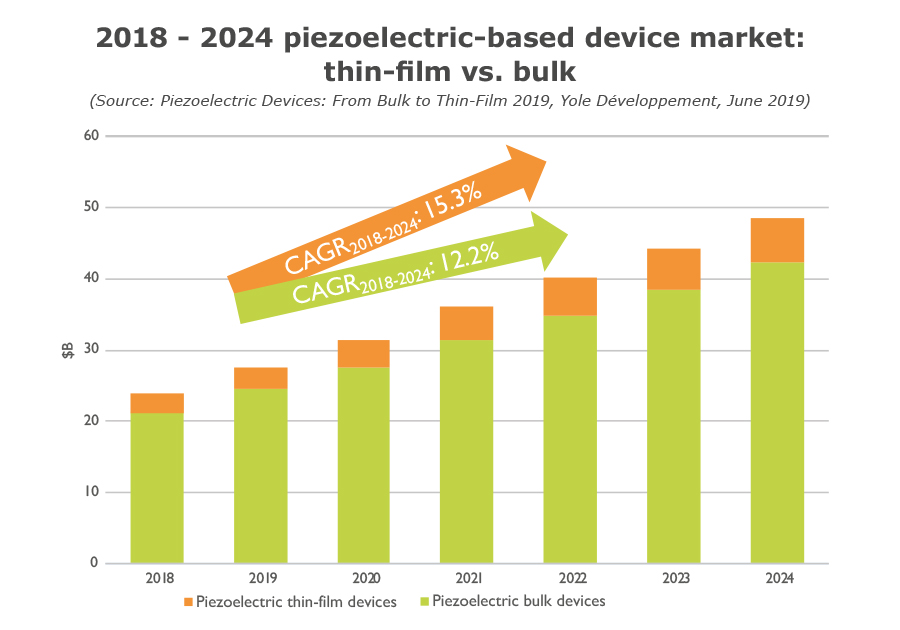 Specific to thin-film techniques, several MEMS foundries have internalized a piezo process in their fab. AlN requires extensive knowledge for piezo layer deposition, since PZT is an exotic material for integration in a semiconductor fab. In terms of deposition, two technologies are competing: Sol-Gel and PVD (sputtering or pulsed laser deposition – PLD). Sol-Gel offers better intrinsic film properties, with good uniformity and higher breakdown voltages. But when considering highvolume production, throughput becomes a major consideration and this is where Sol-Gel exhibits limitations.

Most MEMS IDMs and foundries have already made their process choices. Fujifilm Dimatix and Bosch have chosen sputtering, while STMicroelectronics and Rohm Semiconductor will pursue Sol-Gel techniques. Equipment manufacturers play an important role in developing the right process: for example, SolMAteS, a Netherlands-based equipment manufacturer, recently announced that its PLD technology has entered the next 5G base-station and receiver market through a production site located in the USA.

This report covers the piezoelectric device supply chain from R&D to major end-users, with a focused analysis on equipment and device manufacturers, describing their process flows and technology choices. 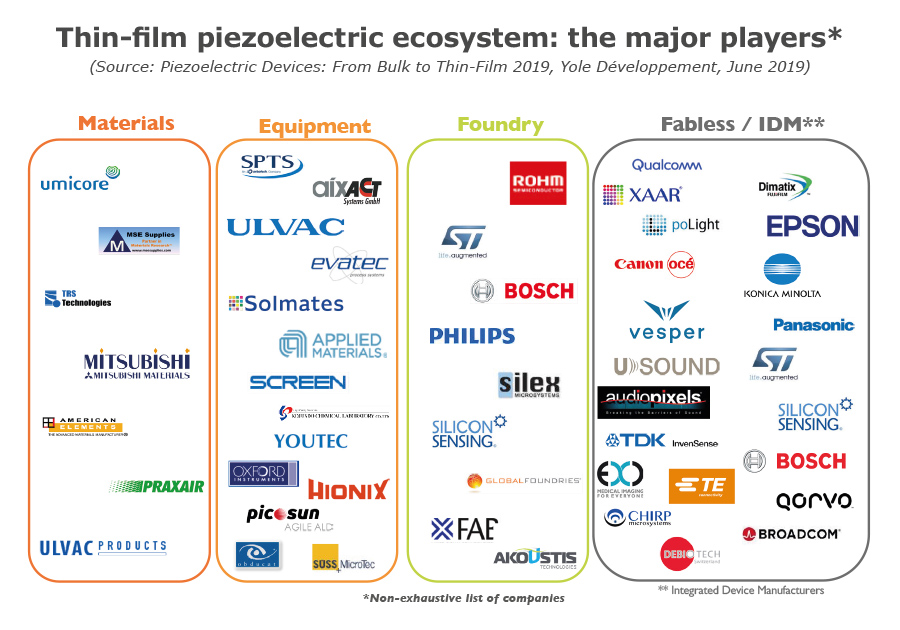 #RF Devices And Technology May 2022