Imaging radar will drive the next growth wave and reach $4.3B by 2027, equating to 30% of the total radar market

Evolving safety regulations and novel driving automation features are driving the radar market. Overall, the radar platform market was $5.8B in 2021. We expect a growth of 14% CAGR, reaching $12.8B by 2027. This market growth will essentially come from 4D and imaging radar, which will better fit the more stringent driving scenario moving forward. Radar sensors are also expected to hit the market for interior monitoring use-cases such as child presence detection and occupancy monitoring systems, more generally. This new type of radar sensor is expected to drive new market opportunities that we evaluate at almost $500M by 2027. A radar module includes multiple ICs and/or functionalities, from the radar processor (often an MCU) and the RFIC (often a transceiver) to the companion PMICs and networking chips. In this report we analyze the breadth of the radar market, from system level with the impact of 4D and imaging and the rise in frequency, to the radar IC market per function as well as the multiple technology transitions happening. An analysis at wafer level is also included. 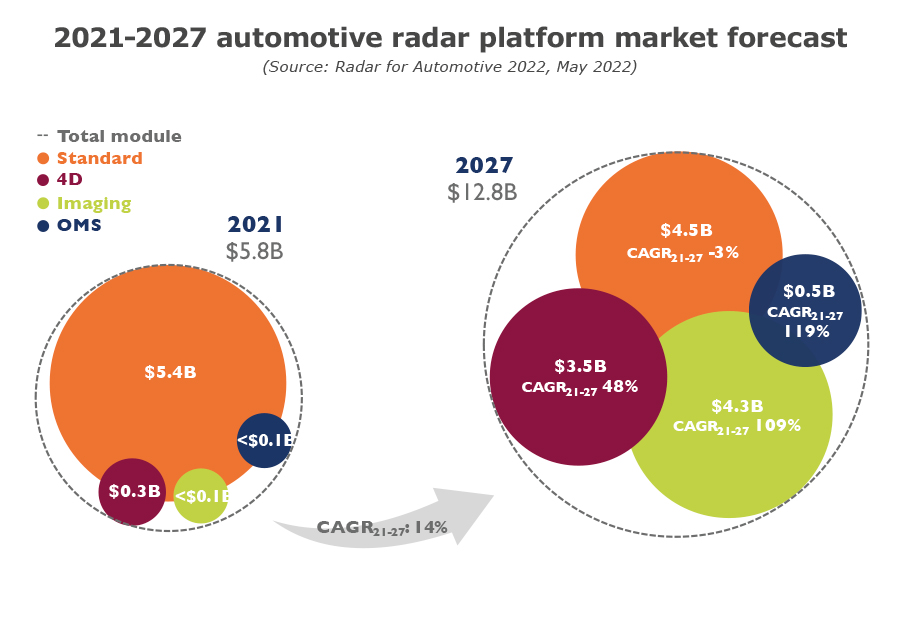 Summarizing 20 years of technology evolution, highlighting the road ahead

The first commercial automotive radar was introduced in 2000 for Daimler and BMW cars. During 2020 and 2021, leading radar suppliers launched their 5th-generation radars. Modern automotive radar sensors are inherited from this longstanding evolution cycle. Up to now, the upgrades mainly focused on cost and form factor optimization, which explains the trend towards integration that the industry has pursued. Besides integration, the RF performance dramatically improved over time. Initially, radars operated in analog beamforming and mechanical steering, before moving to digital beamforming (full scene illumination). In the digital beamforming era, MIMO techniques have been introduced, enabling an increase of the antenna virtual aperture while keeping a reasonable physical size. Currently, MIMO scaling is proposed by the industry (from 0.2k to 2k pixels) as the baseline for achieving sub-1° angular resolution for imaging radars. This is coming with new challenges to be overcome on the signal processing and computing side, which explains why the focus is shifting towards deep learning and artificial intelligence.

The automotive radar market has drawn more interest over the past few years. At system level, the market is led by six major Tier 1s: Continental, Bosch, Hella, Denso, Aptiv, and Veoneer. Meanwhile, at silicon level, NXP and Infineon share most of the market. Even though the radar market has been well established for many years, we see multiple new players positioning and getting design wins, either at system level (Magna, Mobis, Weifu, etc.) or at silicon level (e.g., Arbe, Uhnder, Vayyar). And there are more to come, as giant tech companies are also investing in radar developments (Huawei, Qualcomm, Intel, …). OEMs seeking new revenue sources and eager to differentiate for survival are keen on direct discussions with these companies, shortlisting their traditional suppliers. This is resulting in strong pressure on leading Tier 1s and semiconductor companies that need to innovate faster than their usual time cycle. Therefore, the leading players are seeking synergies either by proceeding to consolidation or moving to vertical integration. 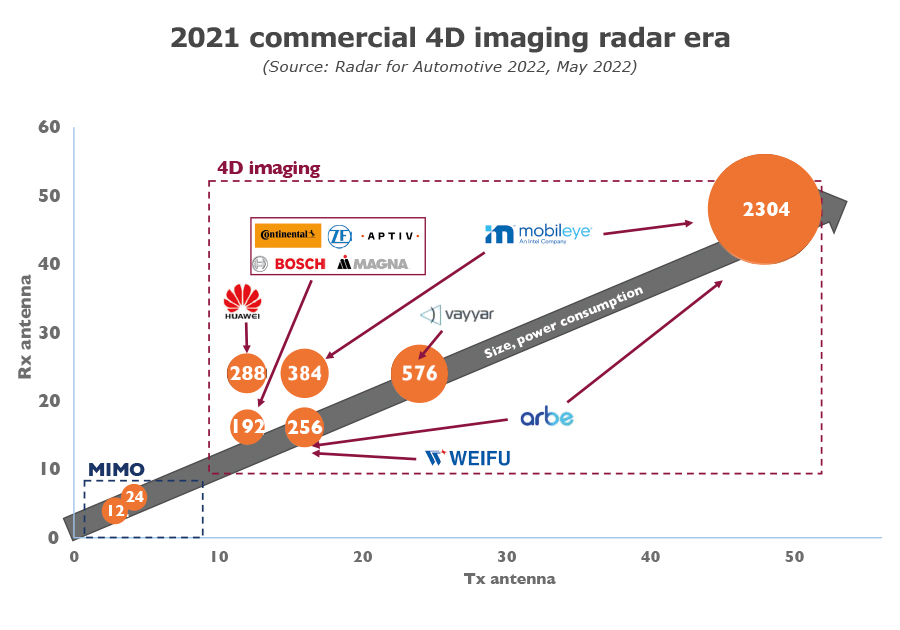 Download the sample
#Computing And Software #RF Devices And Technology