Beyond communication, silicon photonics is penetrating consumer and automotive – heading to $1.1B in 2026.

MORE APPLICATIONS ARE EMERGING FROM THE SILICON PHOTONICS PLATFORM

Novel applications for silicon photonics are poised to further penetrate the market. In March 2021, Aeva, another California-based company, went public with an initial valuation
of $1.7B. The company’s goal: bring frequency modulated continuous wave (FMCW) LiDAR to the market with silicon photonics in order to serve autonomous driving. Also in March
2021, the American company Rockley Photonics announced its intention to go public in Q2 2021 at an initial valuation of $1.2B with an Apple-supported spectrophotometer project for smartwatches.

In addition to sensing for immunoassays, FOG, LiDAR, and consumer healthcare, other applications for silicon photonics include electronic noses, optical coherence tomography
(OCT), and cardiovascular diagnostic devices.
Computing could also benefit from SiPh through photonic computing and quantum computing, as well as optical interconnects in disaggregated datacenters, which will allow using light to connect the various elements of highperformance computing.

This Yole Développement Silicon Photonics 2021 report presents a complete analysis of the silicon photonics market up to 2026 with revenues, volumes, and average selling prices segmented by applications and technologies.

Apple started working with Rockley Photonics in2017 and has since become Rockley Photonics’slargest customer, with $70M of non-recurringengineering (NRE) commitment to date. Over2019 – 2020, Rockley Photonics had two maincustomers that accounted for 100% (2020) and99.6% of its revenue (2019). To date, RockleyPhotonics has received $359M in investments.

Rockley Photonics seeks to develop and produce photonic modules (based on silicon photonics) that can measure numerous biological parameters such as blood oxygen levels, lactate, alcohol, and glucose, among others. The project is known as a “clinic-on-the-wrist” and relies on a miniaturized spectrophotometer. Universities have previously demonstrated such spectrophotometers, but industrialization to the level of the Apple Watch could be a tough challenge.

With an estimated silicon photonics die price of $18, the module could be estimated at $45 and could fit a new, high-end $699 Apple Watch with healthcare functions. If the adoption rate of healthcare functions for smartwatches reaches 20% by 2035, the associated SiPh die market could reach $1.1B. By comparison, the 2020 silicon photonics die market for optical transceivers is estimated at $84M. 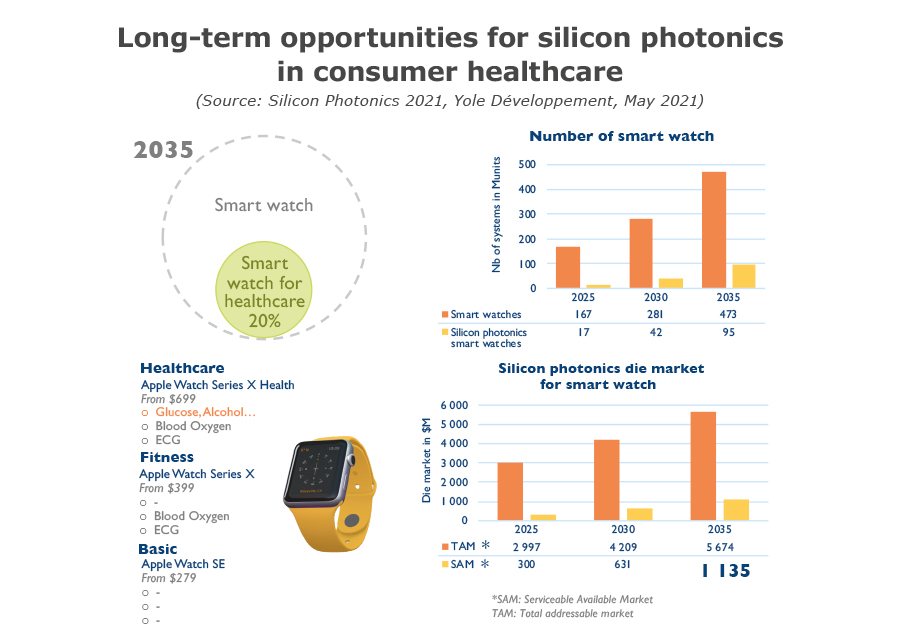 INCREASED VARIETY AND DENSITY IN THE INDUSTRIAL LANDSCAPE

Three developments are evident in the silicon photonics industrial landscape: vertical integration, SPAC, and emerging foundry services.
In optical communication, the arrival of 51.2Tbps network switches by 2025 is expected to start a shift from pluggable optical transceivers to CPO technology. The high level of technological acumen required for CPO is limiting this technology to highly integrated companies such as Cisco, Intel, and Broadcom, all of which show a high level of readiness for CPO.

LiDAR and consumer healthcare benefit from a different development model which is based on NRE and IPO through a SPAC, providing huge amounts of cash for research and development.
For example, Apple recently announced a new $410M award for II-VI for the development of optical technology, on top of an initial $390M award in 2017.

This report furnishes a thorough analysis of the silicon photonics industrial landscape, including players, supply, acquisitions, partnerships, and market share.