Silicon photonics: beyond the tipping point!

Photonic Integrated Circuits (PICs) are built from many different materials, on custom manufacturing platforms. These include silicon (Si), indium phosphide (InP), silica (SiO2), lithium niobate (LiNbO3), silicon nitride (SiN), polymer or glass.
PICs aim to bring advantages of the semiconductor world, in particular wafer scale manufacturing, to photonics. The motivations for PICs are numerous, including smaller photonic dies, higher data rates, lower power consumption, lower cost per bit of data and better reliability compared to legacy optics.
PICs are progressively replacing vertical cavity surface emitting lasers (VCSELs) for increasing bandwidth and distance in Datacom networks. PICs are used for high data rate transceivers (100G and above) in coherent or non coherent mode. In the
future, PICs will be needed when close integration of electronics and photonics will be needed.

The largest volume demand for PICs is for data center interconnects (or DCIs) in data and telecom networks, with new applications coming such as 5G wireless technology, automotive or medical sensors. InP is the most used but Si photonics is
growing faster. Hyperscale networking companies like Google, Apple, Facebook, Amazon and Microsoft (GAFAMs) are today the driving force for the deployment of Si photonics technology. They are currently setting up interconnected networks with local data centers at the nodes of the mesh.
GAFAMs are ahead of the traditional telecom players in investment, setting up their own longhaul and subsea networks for DCI. Until recently, they were relying on traditional telecom players for long distance transmission. In 2018, Si photonics has entered long-haul DCI with large hyperscale companies now being agnostic regarding Si or InP technology.

Si photonics, which is a category of PIC, is leveraging semiconductor manufacturing infrastructure to combine different photonic functionalities on a same chip, although lasers still use InP. Si is today expected to have the highest growth for optical transceivers. In the future, Si photonics will integrate other PIC materials, as Si uses mature manufacturing platforms but will also use other materials when performance is better. Options include InP for lasing, germanium (Ge) for photo detection, LiNbO3 for modulation and glass for interconnect.

In recent years, strong R&D effort has been put into the embedded optics approach to have photonic dies as close as possible to the electronics on the board in the server. Today, development of copackaged Application-Specific Integrated Circuits (ASICs) and optics for switches anticipates future data center architectures and reduces power consumption. Switch ASIC companies will capture a lot of value and are likely to be involved in more mergers and acquisitions in the future. 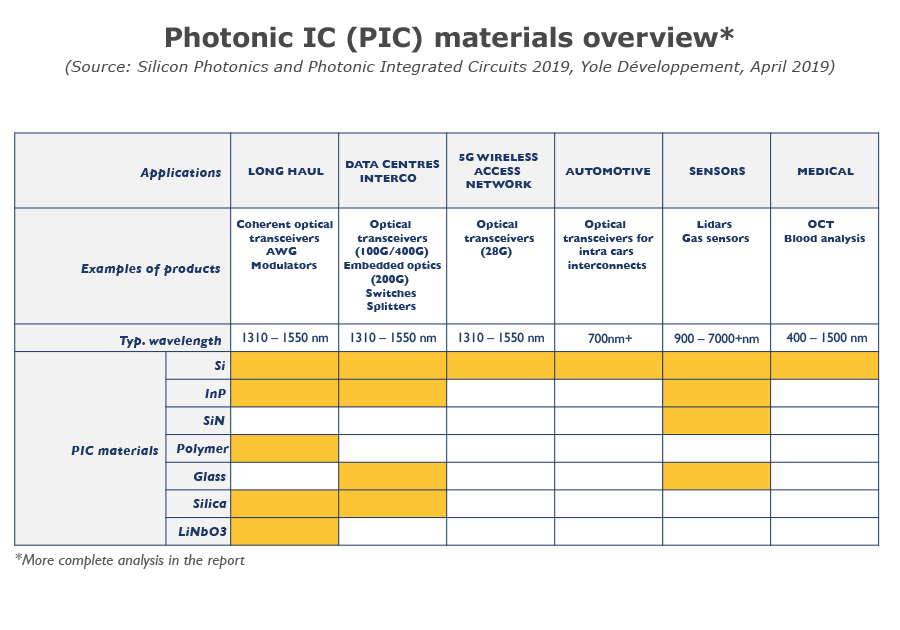 THE MARKET WILL BOOM, WITH 400G GROWING FASTER THAN 100G FOR SI PHOTONICS

The total market for PIC-based transceivers using Si photonics and InP will grow from around $4B in 2018 to around $19B in 2024, from around 30M units to around 160M units. Si photonics will have the highest compound annual growth rate (CAGR) of 44.5%. It will grow from around $455M in 2018, equating to 1.3M units, to around $4B in 2024, equating to 23.5M units.
DCI from metro to long haul/subsea is the largest market, with coherent telecom and sensors being a minute part. 5G is coming and could involve large volumes in the future as well.

Beyond DCI, other applications are looming. For example, the following companies plan to use their PIC platform for LiDAR applications: Intel, Rockley Photonics, SiLC, Blackmore, and probably many more. However, the prospects of market success are
still uncertain for LiDARs as they could be displaced by a combination of other approaches like radar and imagers and the success of autonomous vehicles is still uncertain because of technical challenges, regulations and strategic changes from car makers.
The market volume for robotic cars is in the range of thousands of units, not millions. So volumes are less than for data centers. 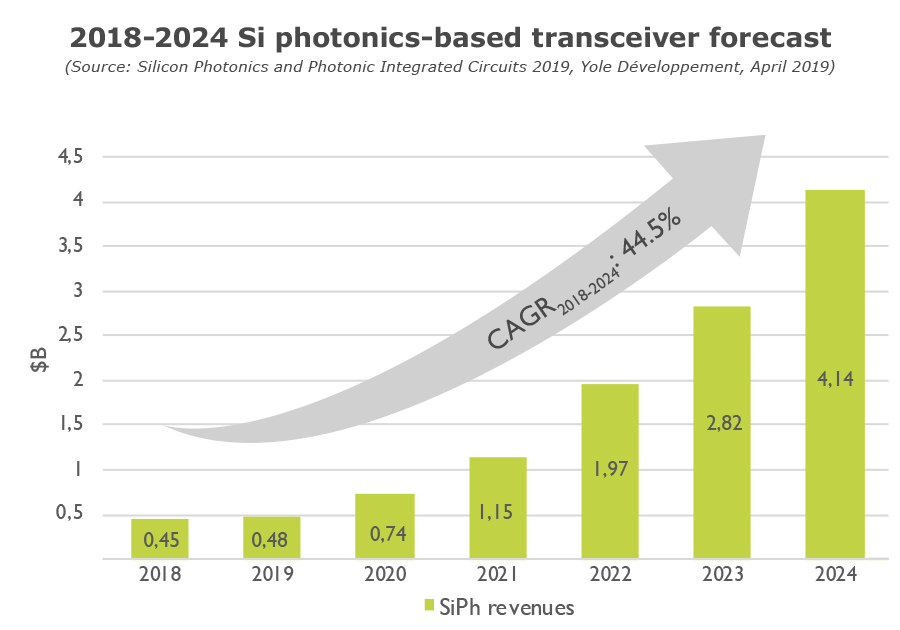 The Si photonic market only involves a few players: Luxtera/Cisco, Intel, Acacia and InPhi. Founded in 2001, Luxtera, now part of Cisco, is the historical pioneer, with almost 2M Quad Small Form-Factor Pluggable (QSFP) transceivers shipped since starting
volume production in 2009. Intel introduced a silicon photonics QSFP transceiver that supports 100G communications in 2016. The company now ships a million units of the product per year into data centers. Intel’s 400G products are expected to enter
volume production in the second half of 2019. Acacia announced the shipment of more than 100,000 400ZR modules in total for coherent optics by 2022. 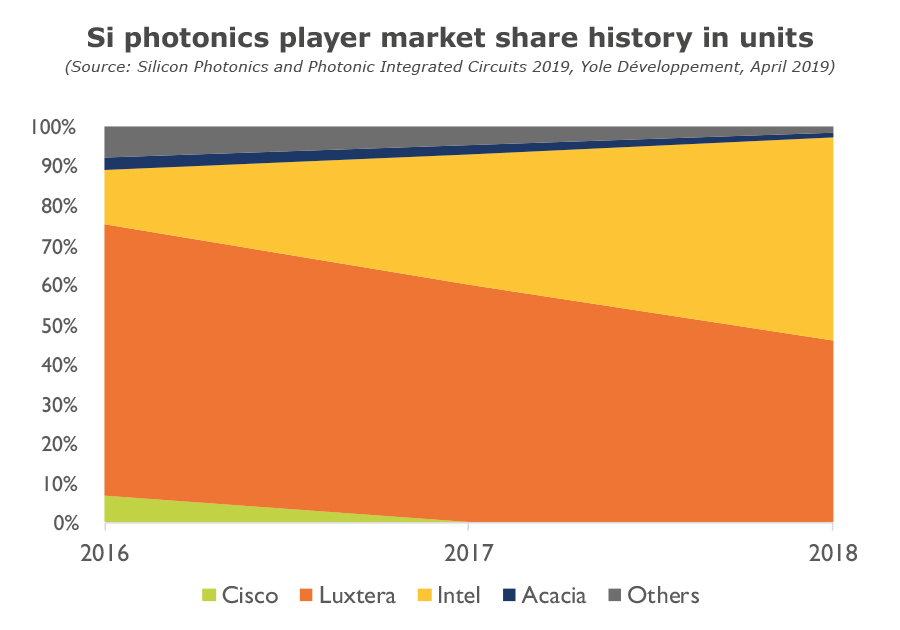 BEYOND THE TIPPING POINT, BUT NOT YET FULLY MATURE!

Despite the current excitement about this technology, we believe that Si photonics is not yet fully mature. We have reached the tipping point thanks to a convergence of early adopters mastering this technology and requests from GAFAMs, but there are still very few suppliers, as mentioned above.

However, a lot of new startups are being created and more foundries are involved from the IC and MEMS industries. One reason for large IC foundries such as TSMC to develop Si photonics approach could be linked to a future co-packaged switch approach. The
data center architecture is evolving from pluggable to more co-packaged optics, with Microsoft and Facebook working on this topic, and ‘Top of the Rack’ switches could disappear. This means that switches could be co-packaged with the optics at the
server level. In this case, volumes will be boosted as the number of switches is very high, in the range of millions of units, providing a potential opportunity for foundries. For smaller MEMS foundries like Silex, apm and VTT, having Si photonics processes is a way to fill their fab, as some processes are very similar, like Cisco/Luxtera’s MEMS capping. Last but not least, there is always a big R&D effort worldwide with many industrial contracts in North America, Europe and Japan. So this market is on its way to industrial maturity and very large volumes.