Second-generation PuC 3D NAND memory and cost comparison to 72-layer with periphery on the side.

Second-generation PuC 3D NAND memory and cost comparison to 72-layer with periphery on the side. 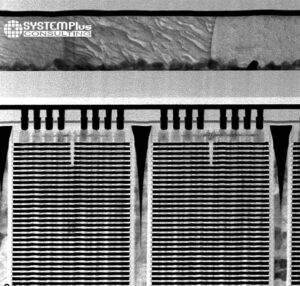 SK hynix is one of the memory manufacturers dominating the NAND flash memory market, and its market share is expected to significantly increase after acquiring Intel’s NAND memory business in 2020.

3D-NAND memories have a vertical structure which includes interlayer insulating layers and gate electrodes that alternate with each other. The storage capacity increases as the number of layers stacked through three-dimensional stacking increases. SK hynix’s 128-layer, also referred to as the ‘4D NAND’ by SK hynix, uses periphery under cell technology (PuC), wherein the CMOS periphery is built under the NAND array. PuC eliminates the area occupied by the CMOS transistors on the wafer, resulting in higher storage capacity per wafer and reduced bit cost. The die area can also be reduced, allowing SK hynix to provide the industry with smaller, denser dies. The number of layers increases from 96-layer TLC to 128-layer TLC – hence increasing bit productivity per wafer by almost 40%. Periphery under Circuit reduces the area occupied by the CMOS transistors on the die, and this technology combined with stacking 128 wordlines increased bit density by ~79% — compared to periphery on the side with 72 wordlines, which reduced silicon die area by 40%.

This report includes a complete physical analysis of the memory package, accompanied by high-resolution TEM and SEM images of the die cross-section, and top view of the memory channel holes. Also included is the manufacturing process of the 128-layer NAND memory and the final assembly, as well as a cost analysis and price estimation of SK hynix’s second-generation PuC NAND memory. Lastly, this report features a comparison that highlights the similarities and differences between the new PuC 128-layer NAND memory and the 72-layer NAND that uses periphery on the side NAND memory. 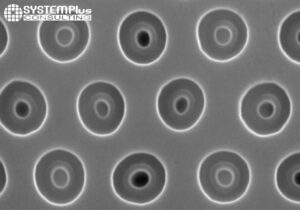 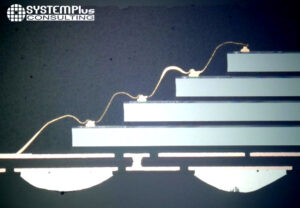 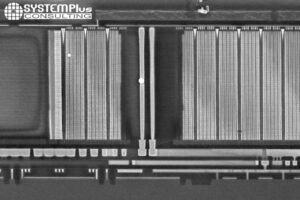