NAND consolidation, China’s bet on two key players, the rise of the CXL interface: as the memory business narrows, the market keeps growing and is poised to exceed $200B in 2026.

Present an overview of the stand-alone memory market:

Provide an understanding of stand-alone memory technologies and applications:

Detail and analyze the competitive landscape:

Scope of the report 12

Impact of Covid-19 pandemic on the memory market 356

AMID THE PANDEMIC, TRADE-WAR TENSIONS, AND CHIP SHORTAGES, THE MEMORY MARKET OUTLOOK REMAINS BRIGHT. REVENUES WILL PEAK IN 2022 AT MORE THAN $180B

In modern data-centric societies, semiconductor memory is a ubiquitous technology and represents an impressive market (>$120B in 2020) with solid growth potential driven by important megatrends, including mobility, cloud computing, Artificial Intelligence (AI), and the Internet of Things (IoT). NAND and DRAM are the workhorse memory technologies and are used, respectively, as storage and working memory for a broad spectrum of applications and systems, including smartphones, tablets, SSDs, PCs, servers, and vehicles. Both markets are cyclical in nature, as they are characterized by periods of shortages and oversupply that give rise to strong price variations and revenue volatility. After substantial oversupply in 2019 – with Average Selling Prices (ASPs) down 49% year-over-year for both NAND and DRAM – market conditions have been improving throughout 2020 despite trade-war tensions and the outbreak of Covid-19. The pandemic had a mixed impact on the memory industry: data center and laptop demand grew, automotive and smartphones faced a slowdown. The net outcome has been a relatively balanced memory demand, while NAND/DRAM production started slowing down as memory suppliers significantly underinvested in new wafer capacity. As a result, combined DRAM and NAND revenue rose 15% from 2019, reaching ~$122B in 2020.

In the present semiconductor shortage era, the storage-drive industry is facing a scarcity of SSD controllers and other NAND sub-components, which causes supply chain uncertainty and puts upward pressure on ASPs. The recent shutdown of Samsung’s manufacturing facility in Austin, which manufactures NAND controllers for its SSDs, further amplifies this situation and will likely accelerate the NAND pricing recovery, particularly in the PC SSD and mobile markets where impacts from controller shortages are most pronounced.

Thanks to a combination of CAPEX cuts from suppliers and flourishing demand, the future is looking bright, particularly for DRAM. Revenues will peak again in 2022, reaching record-high values of $120B (DRAM) and $68B (NAND). In the long term, DRAM and NAND revenues are expected to grow to $81B (NAND) and $124B (DRAM) with CAGR 20-26 of ~11% and ~6%, respectively. In the same period, the ASP is expected to decrease by ~7% (DRAM) and ~16% (NAND), driven by cost-per-bit reductions enabled by technology scaling. 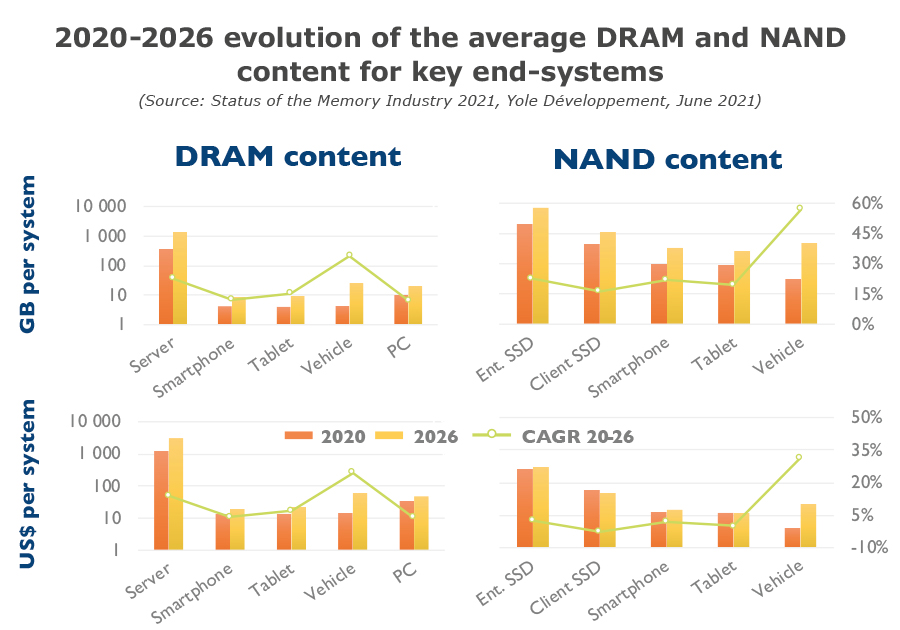 THE MEMORY-PROCESSOR INTERFACE IS KEY FOR OVERCOMING THE “MEMORY WALL”. CXL AND DDR5 WILL ENABLE THE NEW WAVE OF DATA-INTENSIVE APPLICATIONS

The processor-memory interface is rapidly evolving to meet growing performance needs from dataintensive applications, which are being hampered by the so-called “memory wall”, a bandwidth limitation associated with data transfer between the memory and the processing unit. DDR5 DRAM is the latest updated to the Double Data Rate (DDR) standard and will significantly boost performance compared to DDR4. The new specification brings lower voltage and moves Power Management ICs (PMICs) onto the memory module. It doubles the maximum data rate and increases the die density by a factor of 4 (up to 64Gb). The production of DDR5 memory is now gaining momentum, with all leading DRAM manufacturers having already finalized their mainstream DDR5 designs. SK hynix announced that they are ready to start shipping DDR5 memory to module manufacturers, and Micron announced sampling of DDR5 memory based on the 1znm technology, targeting RDIMMs for servers. The DDR5 memory standard will be utilized by upcoming Intel and AMD platforms that are expected to be launched later this year. We expect a veritable takeoff of DDR5 will occur from 2022.

Besides DDR, a variety of new open interfaces and protocols are currently in the works: CXL, Gen-Z, OpenCAPI, CCIX. Among these, CXL is picking up momentum in AI/HPC data center applications, providing a sweet spot – in terms of capacity and density – for connecting high-capacity DRAM and SCM technologies such as 3D XPoint. The “Status of the Memory Industry 2021” report will provide an overview of DIMMs, SSDs, and interfaces, marking the beginning of Yole’s program in the field of memory modules and storage drives. 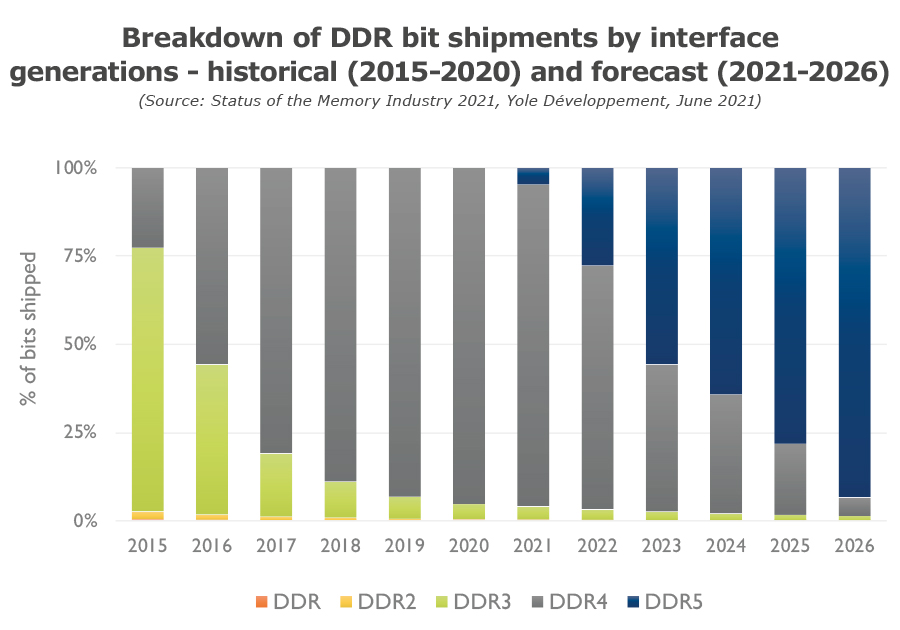 THE MEMORY BUSINESS IS NARROWING: CHINA HAS CHOSEN ITS TWO CHAMPIONS – YMTC AND CXMT – AND THE NAND MARKET KEEPS MOVING TOWARDS CONSOLIDATION

China is a key market for memory suppliers, accounting for more than 35% of the overall NAND and DRAM memory sales. In the last years, Chinese central and local governments – in partnership with private players – have been investing billions of dollars in developing a local memory industry and bridging the gap between domestic production and consumption. While Chinese funding agencies have been supporting many semiconductor projects in the last few years, nowadays, they are more cautious and concentrate investments on the most reliable/promising technologies and players. The priority is clearly given to mainstream memories that are critical for the growing data center and mobile businesses. These are being developed by two key players: YMTC (NAND) and CXMT (DRAM). YMTC is currently shipping 64L NAND in low volumes domestically (including SSDs), with 128L production under development. CXMT is currently the leading DRAM maker in China, followed by Tsinghua Unigroup; broad commercialization is planned with Gen 3 products, while initial production will be limited and available only in the local market. On October 20th, 2020, SK hynix announced the acquisition of Intel’s NAND manufacturing capacity in Dalian, its NAND-related IP, and its SSD business. This deal is beneficial to both parties and is not likely to have a major impact on the memory markets in the near term, as the two suppliers historically served different end markets – Intel focused on enterprise/data center; SK hynix focused on mobile and consumer segments. However, the longer-term impacts could be significant if this serves as the first step and motivator for subsequent consolidations that could alter the structure of the industry. With YMTC entering the market in the coming quarter/years, broad industry consolidation may be the best path towards a healthier industry… 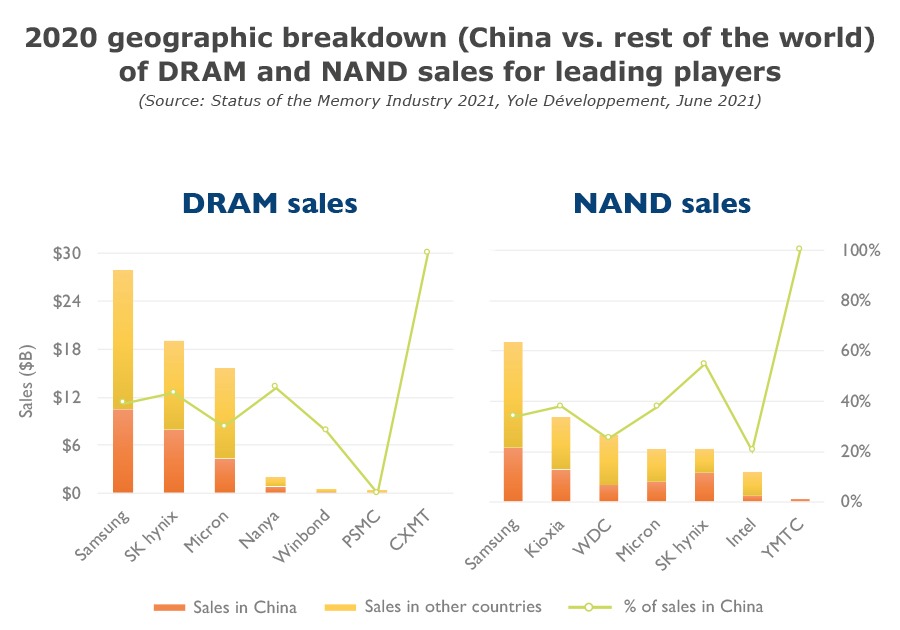