What does the future hold for the MEMS Industry?

Focus on the Chinese market 178

HOW IS THE MEMS MARKET HOLDING UP IN A GLOOMY ECONOMY?

The semiconductor market had its best year in 2018, reaching almost $470B. However, growth was slower than anticipated due to sluggish smartphone and automotive sales. MEMS, which follows the semiconductor market, also had a good year, but with a slower growth rate than anticipated. However, Yole Développpement (Yole) expects the MEMS market to experience significant growth from 2019 – 2024. Yole estimates the market will exhibit +8.3% growth in value and +11.9% growth in units, with consumer still having the biggest share (more than 60%). Some devices will benefit from new usage: for example, MEMS printheads for high-resolution printing, and microphones for more widespread adoption of voice interface. Also, regulation will favor pressure sensor growth due to the implementation of TPMS regulations in China.
For inertial MEMS, automotive and consumer will continue to be a major part of the demand, focusing mostly on combos which provide better form factors and easier integration/higher functionality.
Moreover, new applications are coming, such as medical (wearables) and industrial (machine health monitoring) for stand-alone inertial MEMS. Also, IMU growth will be driven by automotive (i.e.robotic vehicles). Future cars could integrate MEMS mirrors, which could find new usage in solid-state LIDAR, as well as microbolometers for night vision capabilities and situational awareness in ADAS.

Yole believes smart buildings and retail will also be the impetus for infrared sensor market prosperity. On the medical side, Si continues to be adopted by microfluidics companies that develop CMOS-based biochips. Despite a slowdown in the smartphone market, 5G will drive the demand for new chips: this is the case for RF MEMS and MEMS oscillators, which will be needed in the deployments of new base stations and for the ever-growing edge computing.

In this 2019 Status of the MEMS Industry edition, Yole has revamped its RF MEMS forecast due to a delay in the adoption of the 8 x 8 MIMO. Despite this, Yole believes BAW filters will grow from $2.3B to $4.4B from 2019 – 2024. Last but not least, emerging MEMS like environmental MEMS, microspeakers, fingerprints, and auto-focus will fuel future market growth. This will be linked to new applications for more mature MEMS devices, such as key fob signal-blocking (accelerometer), gunshot localization (microphones), AI speakers, etc. Moreover, sensor fusion coupled with AI (and eventually edge computing) could stimulate new usecases and rejuvenate the MEMS market. 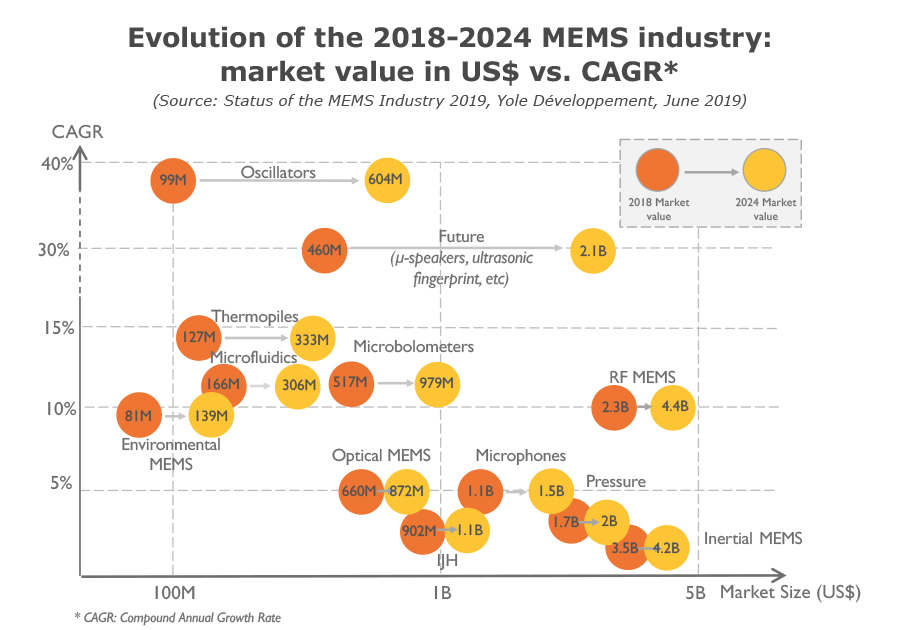 GAME OF MEMS: BATTLE FOR THE THRONE

Competition is getting tougher and tougher between the different players, since the cake is not as big! On the M&A side, MEMS-related acquisitions declined during the last year, reflecting the weaker, general  semiconductor-related M&As and a consolidation of the business. Furthermore, there were no significant new entrants, and existing players struggled to compete against each other.
IDMs will continue producing in high volumes, while margins will keep dropping due to higher competition. For players, differentiation of products is paramount if they want to gain market share.

During 2018, every MEMS foundry grew: some by a little, others by a lot. However, not all MEMS device manufacturers saw their revenue grow.  Competition is fierce for companies manufacturing the same devices:

Finally, the « BB » effect is evident: Broadcom/Bosch with more than $1B revenue stand apart from everyone else. Broadcom has benefited from exponential growth after 2013 – and from 2009 – 2014, Robert Bosch showed impressive growth too, going from $400M MEMS revenue in 2009 to $1.2B in 2014. In 2017, after two years of flat revenue, sales grew again, and then again in 2018. Bosch benefits from a manufacturing infrastructure that supports automotive and consumer markets, allowing manufacturing costs to be optimized.

Will the rapid growth of Broadcom continue in 2019, or will it be the year when Bosch retakes the throne? 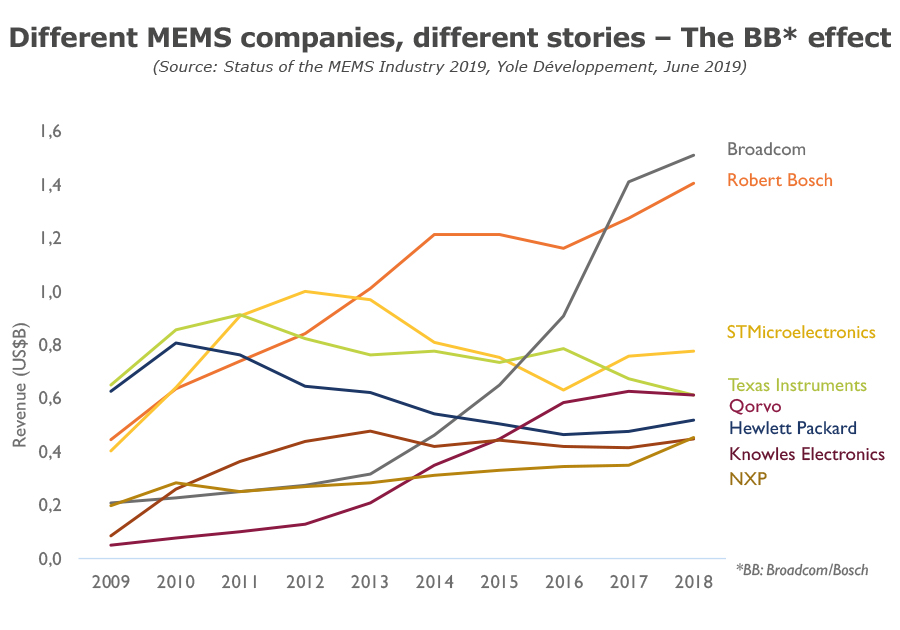 MEMS are part of the More than Moore technologies. As such, they are not subject to a well-defined roadmap such as critical dimensions (CD) decrease, as for Moore’s law. Also, most MEMS manufacturing technologies are mature (i.e. bulk, surface, cavity, packaging, thick SOI, WLP), while others have virtually disappeared (i.e.XeF2 etching). However, there are still new processes/materials in development for new functionalities (i.e.piezo MEMS) and reduced size (i.e.NEMS).
Piezoelectric technology is increasing its momentum. Indeed, a revolution in MEMS technology is underway: piezoelectric MEMS. More and more gyroscopes, BAW filters, and inkjet heads are being created with this technology, and now microphones, microspeakers, autofocus, and PMUT (Piezoelectric Micromachined Ultrasonic Transducers) for fingerprint sensors, ultrasound, and gesture recognition, are underway too.
Public/mainstream interest in this technology is also reflected by the increasing amount of funding in companies related to piezo-MEMS, in a period where MEMS M&As and funding were otherwise low. Specifically, in 2018:

Furthermore, several MEMS foundries have already integrated a piezo process (PZT, AlN) in their fabs. Will piezo technology be the one to rule them all in the future?

Another big trend is edge computing, with sensors and MEMS driving a new age of technology. Big data is an industry born of recent advancements in AI and machine learning, built upon and fueled by a wealth of new data from ever-expanding sensor applications. Sensors are digitizing the human experience, and as the real and virtual worlds move closer together, it will be sensors that bind them, enabling new experiences for users everywhere.
Running AI at the edge, coupled with sensor fusion, will open new applications for MEMS in audio, motion, olfactometry, and imaging. 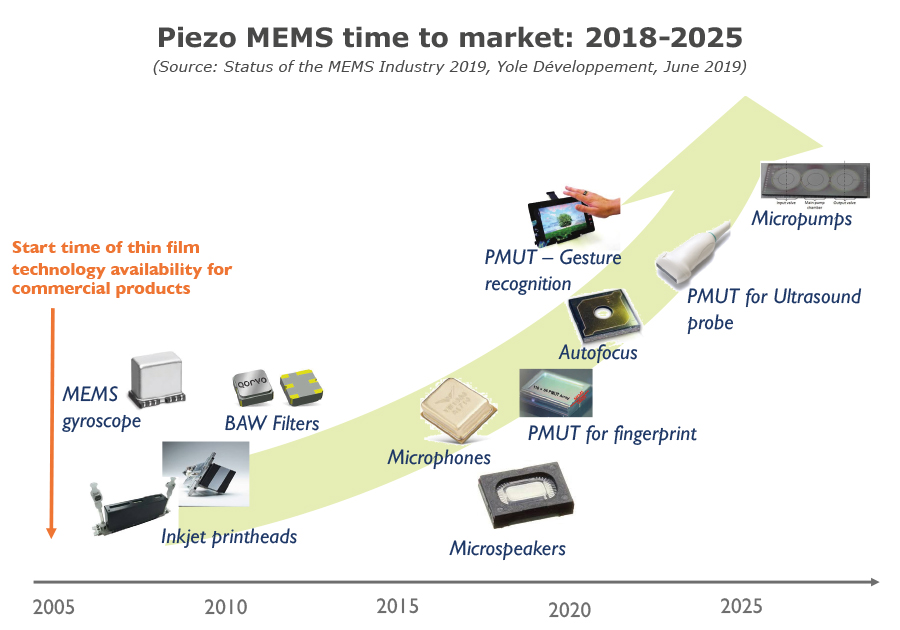