An in-depth understanding of the IR imaging value chain, infrastructure and players

An in-depth understanding of the IR imaging value chain, infrastructure and players:

FROM AMAZON AND LG INNOTEK TO CATERPILLAR, THE INFRARED SENSING MARKET IS ATTRACTING BIG NAMES!

2018 could be the year when the uncooled infrared imager and detector market reaches a tipping point with the involvement of big companies. To name a few:

Besides these companies, traditional uncooled infrared players still continue to be very active in terms of new products and technologies. Leonardo DRS launched its TENUM™640 core, based on a Wafer-Level-Packaged VOx microbolometer with 10μm x 10μm pixel size, making it the smallest. available anywhere. ULIS created a specific product for smart building applications, called ThermEye, and has been selected by Irlynx for smart building projects. FLIR, the market leader, launched many new products including the FLIR One Pro, IntelliRock III and Saros Dome.

The uncooled infrared landscape has also been shaped by the rapid growth of SEEK Thermal. Having shipped more than 100,000 units in 2017, SEEK Thermal seized a decent share of the 2017 microbolometer market. This new kid on the block markets aggressively, and is trying to address as many infrared applications as possible. 2017 saw 1.3 million microbolometers shipped in total. The top three players were FLIR, with 66% market share, followed by ULIS, with 13%, and SEEK, with 12%. Infrared detectors are more conservative. Five players continue to share almost 80% of the $252M value market in 2017. Excelitas claims 43%, followed by Nicera, with 17%, Murata, with 11%, Melexis, with 7%, and Heimann, with 4%. 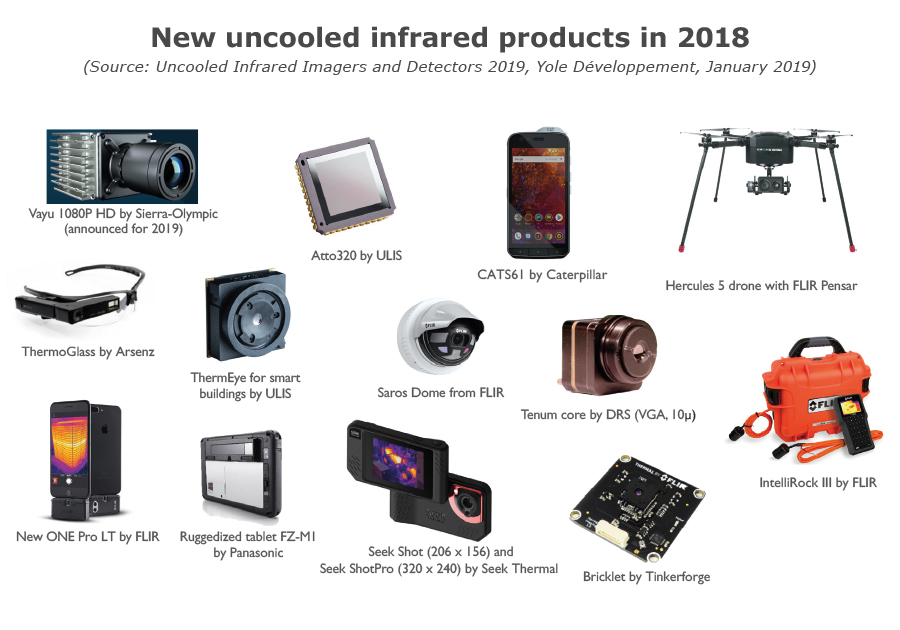 The uncooled IR detector and imager market looks promising, with annual growth of 7% in value over the 2018-2024 period. For microbolometers, numerous commercial applications have driven the imager market growth. These include thermography, surveillance, personal vision systems (PVS) and firefighting. Most noticeably, shipments exceeded a million units in 2017, mostly due to FLIR’s Lepton core and SEEK Thermal’s success, heading to two million units in 2021!

The uncooled IR imager business is still driven by commercial markets, which will continue to expand quickly, with a compound annual growth rate (CAGR2018-2024) of 15.8% in shipment volumes. These markets will represent 93% of all shipments by 2024. Thermography will have a 9% shipment volume CAGR2018-2024. This application is a sure thing for the microbolometer market, with IR imagers used here for industrial and commercial applications including home diagnosis and hot spot identification. Firefighting is an attractive opportunity with 20% shipment volume CAGR2018-2024. There is a very large potential market, with 37 million firefighters worldwide. PVS include portable binoculars, monoculars and sights for rifles. They are used in patrolling borders, law enforcement and increasingly for consumer outdoor use, including mountain sports and hunting. This market has been a big surprise and a large contributor to the global infrared market, expected to reach 30% annual unit growth between 2018-2024. The USA is the largest market by far because of its large hunting and law enforcement markets.

Among other applications, smart buildings and robotic vehicles are noteworthy. Driven by the desire for better energy control, smart buildings are a promising application with 75% shipment volume CAGR2018-2024. However, this is in direct competition with IR detectors and 24GHz radars, which are less expensive.

IMAGING IS NICE BUT DETECTION CAN ALSO DO THE JOB!

In our report, we cover both detectors and imagers, including pyroelectric sensors, thermopiles and microbolometers, from single pixel detectors to XVGA imagers. We define the limit between detecting and imaging around 80 pixel x 80 pixel resolution. The detector market, including pyroelectric sensors and thermopiles, will have a 15% CAGR in value and 6% CAGR in units for 2018-2024. This is a mature market where applications like motion detection, temperature measurement, gas and fire detection are driving unit growth in the 5-10% CAGR2018-2024 range. Buildings and retail applications are driving the current demand. Heating, ventilation and air conditioning applications are forecasted to 15% unit CAGR2018-2024. The demand comes from monitoring office and commercial buildings’ power consumption. People counting in retail will show 30% unit CAGR2018-2024 for uses including queue management, door access control in buildings/stores, elevators and people counting for marketing. Smart building applications concern commercial/tertiary buildings that include IT infrastructure and sensors for monitoring parameters such as humidity, temperature and people’s presence. The information is primarily used for energy saving but also for security. We forecast 60% CAGR2018-2024 in shipment volumes for smart buildings. 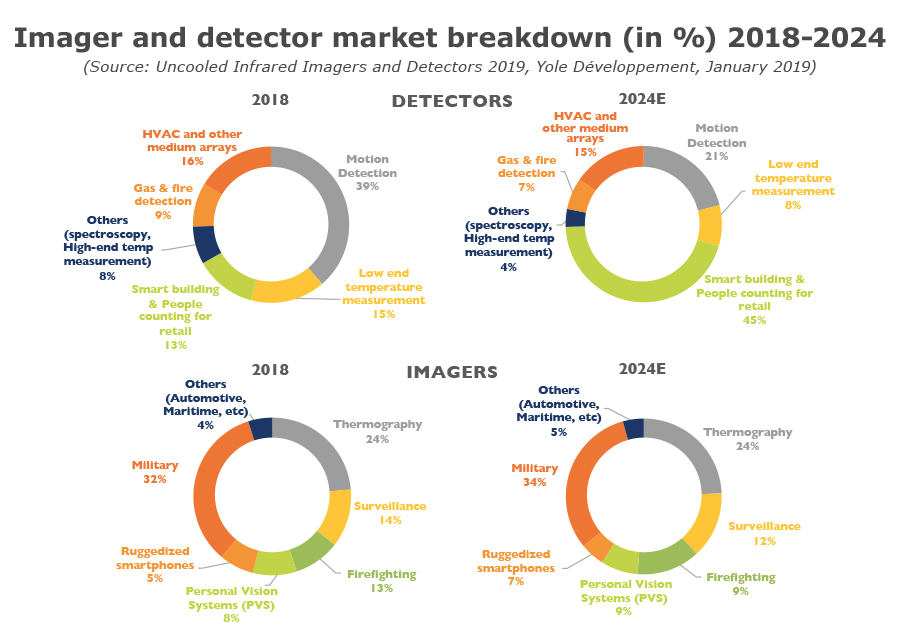 CAN IR IMAGING COUPLED TO VISIBLE IMAGERS AND RADARS BE AN ALTERNATIVE TO LIDAR?

For years, the volumes of IR sensors for night vision systems for cars has been around 100,000 units. But now Uber’s lethal accident has raised the question of whether night vision for autonomous driving would have prevented it. For autonomous and robotic cars, current vision systems use a combination of visible light, LiDAR and radar, and can provide information about a vehicle’s surroundings. However, these systems are limited by certain factors, such as available light. The ability to distinguish between different types of objects, e.g. between humans and inanimate objects, is also limited. Thermal imaging systems could sense, detect and identify obstacles, even at distances in the kilometer range and in poor visibility. We believe robotic cars will be first on the market. This type of car is expensive and can afford to have a high budget for sensory capability. They will be on the road before cars for human drivers with autonomy levels 4 and 5. Robotic cars could adopt microbolometers, followed by autonomous vehicles for high autonomy levels. We forecast more than 500,000 shipments for microbolometers in 2024 for robotic cars. 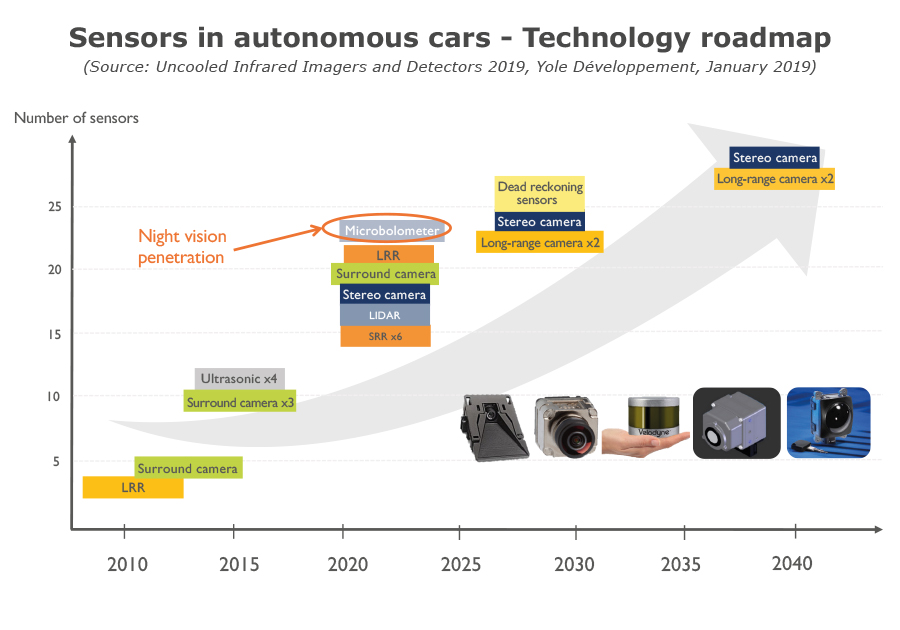