UVC LEDs are one solution to contain the COVID-19 pandemic, possibly making the market increase tenfold and reach $2.5B in 2025.

AFTER COVID-19 PANDEMIC INITIATES UVC LED GROWTH, MARKET COULD REACH $2.5B IN 2025

Finally, we are here. After more than 10 years of waiting, in 2020, the UV LED market could ramp up and reach the billion-dollar mark very rapidly. There is good in everything bad, and the recent COVID-19 pandemic has created some perfect use-cases for the technology to spread across a rapidly-changing disinfection/purification market.

From being worth around $20M in 2008, UV LEDs reached a first milestone in 2015 by attaining the $100M market level. Such growth was mostly driven by UVA LEDs that were increasingly used in UV curing applications. But further growth was then restricted by the industry’s overcapacity and strong price pressure following the massive entry of visible LED players starting from 2012. In this context, the attention of the industry was then focused on UVC LEDs that could act as a game-changer for disinfection/purification applications. But UVC LED technology is intrinsically different than for UVA LEDs. And whereas UVA LEDs’ External Quantum Efficiency (EQE) has rapidly reached more than 50%, UVC LEDs’ EQE is still below 10% in most commercial devices. Consequently, the technology was not considered mature by integrators and only early adopters started implementing it.

But that was before COVID-19 pandemic. SARS-COV-2, the virus that causes COVID-19, has one of the highest reproduction/transmissibility rates compared to all viruses that have emerged in our modern society. To reduce spread of the disease, many recommendations have been made by the World Health Organization and governments/authorities. But those best practices are mostly preventing infection from direct contacts. For infection based on close contacts or indirect ones through contaminated objects or surfaces, disinfection technologies are required to further reduce spread of the virus. In this field, UV lighting, which can deactivate bacteria and viruses through physical methods, has gained unprecedented attention.

The COVID-19 pandemic has created momentum for the UVC LED industry. From $144M in 2019, the UVC LED market is expected to more than double in 2020 to reach $308M. It could have been even bigger if production capacity could keep up with demand. With market growth now being triggered, we expect it to be worth more than $2.5B in 2025, driven first by surface applications and then water ones. 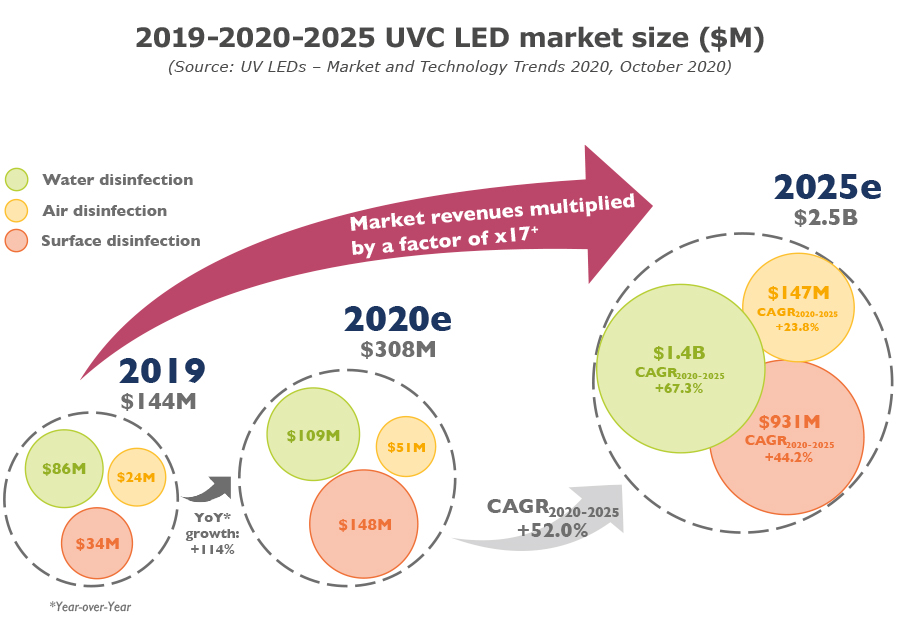 THE UVC LED INDUSTRY IS IN THE STARTING BLOCKS

It’s been more than 10 years that the industry has waited for this moment to happen, and all the players have worked hard to make it possible.

UVC LEDs are still much more expensive than traditional UV lamps, but manufacturers have got closer to the requirements of the early majority willing to use the technology. Indeed, from ~$100/mW in 2015, UVC LED prices reached $0.3-2/mW in 2019, which represents a real threshold for most potential large-volume integrators.

Such trends were made possible by the entry of several new entrants from the visible LED industry. Typically, LG Innotek and Seoul Semiconductor have been key companies in getting the UVC LED market ready to emerge. But their destinies will be different. LG Innotek started exiting the business before the COVID-19 pandemic, due to more than 10 years of consecutive losses of its visible LED division. Seoul Viosys has made an Initial Public Offering (IPO) in what can be considered as the best timing ever, when the pandemic started and UV lighting was drawing the attention of the entire world. The entry of several pure packager and module players has also helped to accelerate technological development, and further reduce the gap between device manufacturers and integrators.

The overall industry was therefore ready for a boom in the UVC LED market – but what has happened has gone way beyond their expectations. The COVID-19 pandemic has created such a peak in demand that an overall shortage appeared across the entire UVC LED supply chain in 2020. And as such trends in demand are likely to last, the overall industry is now looking to increase manufacturing capacity very rapidly. As of Q3-2020, already more than 300Munits of capacity have been announced to be installed in the short term.

Financial gain will further intensify the competition and it’s likely that an industry experiencing such increase in demand will see big changes. We expect leaders like Seoul Viosys and NFKG to maintain their position in 2020 and 2021. But recent new entrants are close behind and will do their best to collect further market shares and catch orders left behind by LG Innotek. 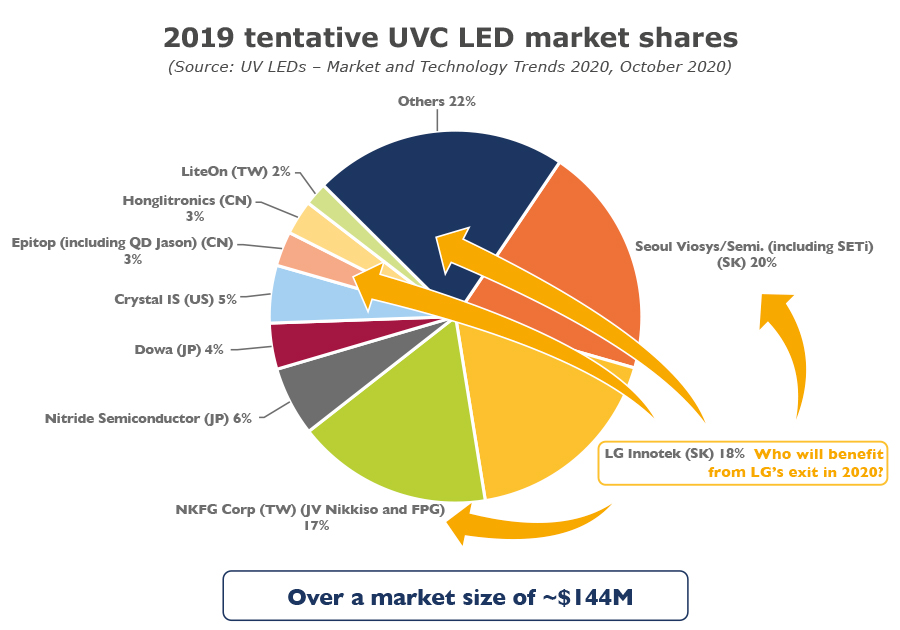 The traditional UV lamp industry has also a role to play as UVC LEDs are still less efficient and more expensive than traditional UV lamps. UVC lamps also have the advantage of fixed specifications, structural design, and circuits. These features allow manufacturers to easily produce systems according to specific requirements of the application, accelerating development time of products. Finally, there is still some lack of knowledge about UVC LEDs’ disinfecting effectiveness, which will benefit incumbent technology.

In this context, some traditional UV lamp manufacturers have already made a move to benefit from this momentum through increasing capacity of their production lines and/or development of new products. One concrete example is market leader Signify, formerly Philips Lighting, which has a plan to multiply its production capacity eightfold very rapidly. Another trend is related to the development of far-UVC lamps that emit at wavelengths around 222nm to get rid of harmful effects of traditional UVC wavelengths.

At the end of the day, we expect such growth in the UV lamp business to come back to UV LED when the technology is on par with traditional UV lamps. Such a transition might then also further increase value at the system level. 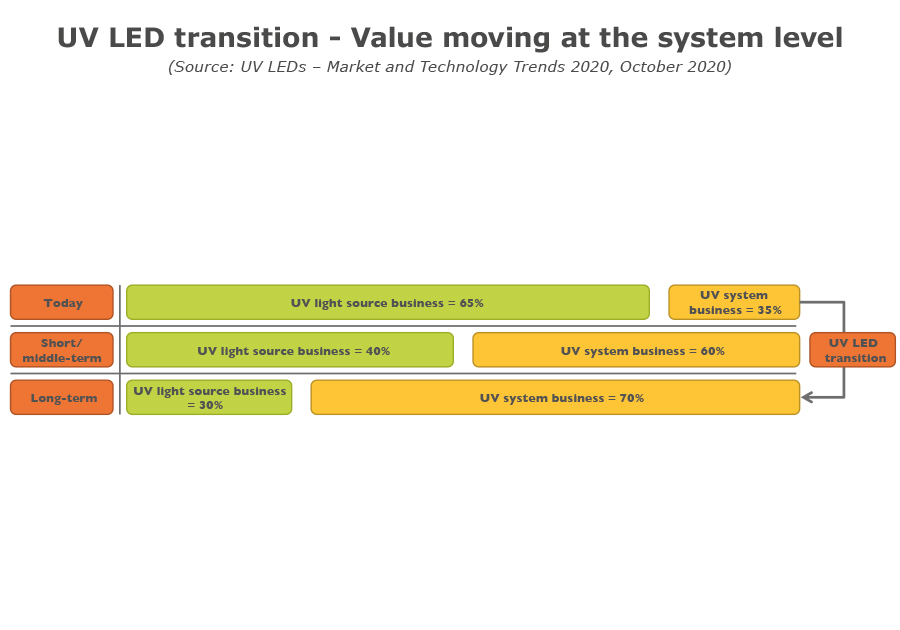