Deliver an in-depth understanding of the VCSEL business value chain, players and trends:

Give insights on manufacturing and associated challenges

Following the release of the iPhone X, several smartphone manufacturers followed the same path and implemented 3D sensing module in the front side of smartphone for face recognition. Since this, it was expected that other Chinese smartphone manufacturers would also implement such module on the front side. This was the case the following year, but it rapidly declined, and 3D sensing modules moved from the front side to the world facing side, mainly for photography application. This can be explained by several factors: the cost of 3D sensing modules, the intellectual property around structured light solution, and the competition of under display fingerprint solutions that were more accessible to mid-end smartphones.

This transition from the front side to the world facing side has an important consequence on the VCSEL market. It was expected that front 3D modules would use structured light solution with two VCSELs contrary to world facing 3D modules using Time-of-Flight (ToF) solution with only one VCSEL. In this context, mobile and consumer applications are expected to generate revenue of
$843.6M in 2020 and this should reach $2.1B in 2025 at a CAGR of 20.1%.

Globally, the VCSEL market is expected to generate revenue of $1.1B in 2020 and should reach $2.7B in 2025 at a CAGR of 18.3%. In this VCSEL market, telecom and infrastructure application, mainly datacom, are expected to generate revenue of $277M in 2020 and should reach $516M in 2025 at a CAGR of 13.2%. Other applications are not significant yet but could emerge at mid to long
term such as automotive applications like LiDAR or driver monitoring systems.

This report presents a comprehensive overview of the main VCSEL applications, including an indepth analysis of 3D sensing in the consumer and automotive landscapes as well as datacom and industrial applications. 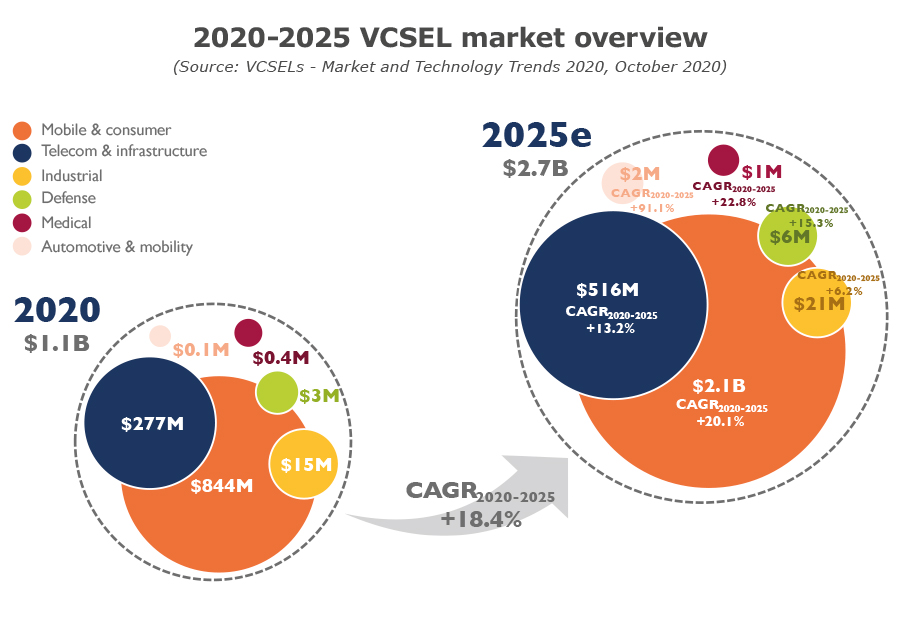 On the technology side, VCSELs are still evolving. This is clearly the case for VCSELs on the rear side of smartphones. At first, it was expected that these VCSELs would be larger than on the front side to achieve a longer detection range. But this is not really the case and Apple, once again, showed that VCSELs can still be improved.

On the word facing side of the last iPad, Apple implemented a LiDAR module. In this module, the VCSEL used inside is quite different from other VCSELs found in indirect ToF modules. This module, with a VCSEL and a SPAD array, is using direct time of flight principle. The VCSEL is slightly different with more wire bonds and more metallization. Contrary to other VCSEL arrays
used in smartphones where all the cavities are driven all in the same time, this VCSEL array has multiple connections so that each line can be driven separately. The particular metallization visible on this VCSEL array is used also to dissipate the heat produced by the VCSEL array. And there is not only a specific metallization but also a ceramic substrate for a better heat spreading.

Technology evolution is not limited to the world facing side and on the front side, several companies are working on integrating the 3D module under the OLED display. This integration is directly linked with the trend to maximize the display size in smartphone. So, the notch has already been reduced and is now about to disappear under the display. This integration could impact the VCSEL as the OLED material is expected to absorb some of the light emitted by the VCSEL. Depending on the absorption, the wavelength of the VCSEL could move from 940nm to more than 1,080nm.

If the wavelength must be changed beyond 1,080nm, there could be a change in the material used to manufacture VCSELs. Indeed, Indium Phosphide (InP) could be used instead of Gallium Arsenide (GaAs). This change will take some time but could considerably change the VCSEL industry with the emergence of new players, low manufacturing yields, and higher cost of VCSELs. 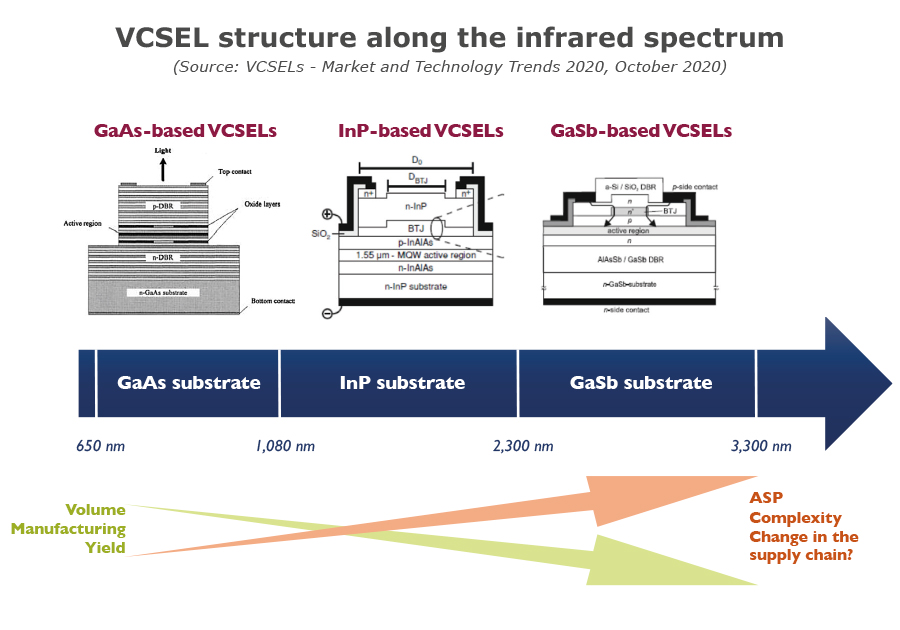 LUMENTUM IS DOMINATING THE MARKET BUT NEW PLAYERS ARE EMERGING

Since 2017 and the integration of 3D sensing modules in smartphones, Apple is consuming the majority of VCSELs produced by Lumentum. In 2017, 41 million units were implemented in iPhones and in 2020, more than 325 million of VCSEL are expected to be used in iPhones. This number represents more than 2/3 of the total VCSEL consumption for mobile 3D sensing.

Lumentum, as the main supplier of Apple’s VCSELs, is clearly leading the mobile and consumer market with 58% of the market in 2020. Behind Lumentum, II-VI and ams are completing the podium with market shares of 17% and 10% respectively.

The supply chain is also evolving following political decision and the trade war between US and China. In May 2019, the US ban Huawei. Lumentum stops supplying Huawei and Huawei must find a new provider of VCSELs. This ban severely damaged Huawei’s supply chain. Huawei had no choice but to build its own supply chain. This is the rise of Vertilite. Other Chinese VCSEL suppliers are expected to emerge as other smartphone manufacturers like Oppo, Xiaomi, or Vivo could follow this trend and develop a local ecosystem to secure their supply chain.

The report estimates the global market share of VCSEL manufacturers with a focus on mobile and consumer. The report gives insights on the emergence of new players that could compete with traditional ones.